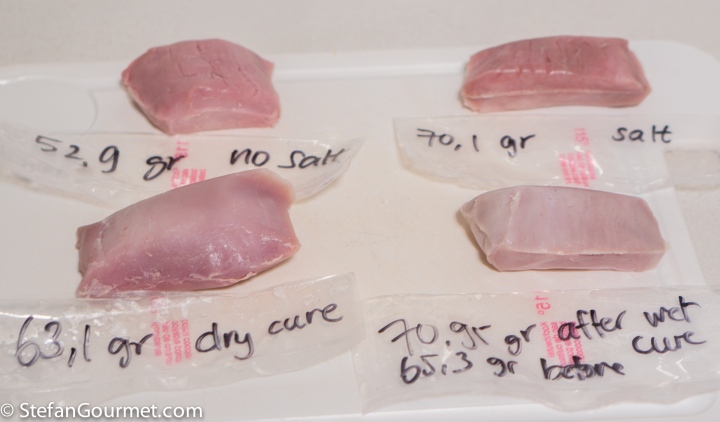 Many recipes for pork loin or pork tenderloin will tell you to brine them, so the meat will be more tender and juicy. And many people keep on brining when they prepare the pork sous-vide, even though that cooking technique will already make sure that the pork will be tender and juicy. And so I decided to put this to the test. Compared to an experiment I did four years ago, I used a more common cut of pork (pork tenderloin), I was more precise about the amount of salt I used, and I used less salt. Together with the previous experiment, I am now confident to state that:

Read on to find out exactly what I did to come to these conclusions. 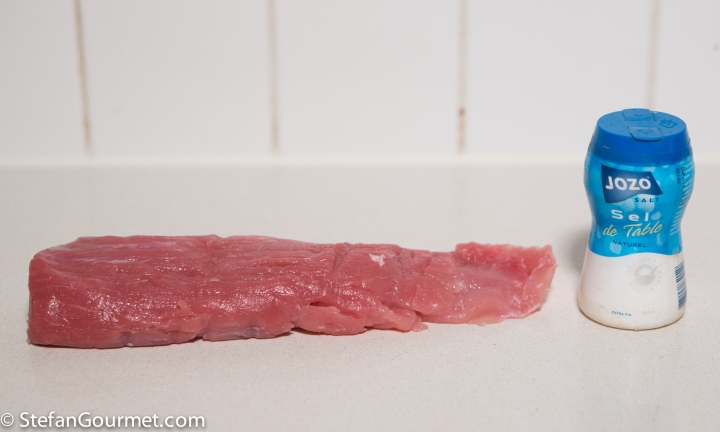 I started with a pork tenderloin and salt.

I cut off four nice medallions (and reserved the tip for another purpose). 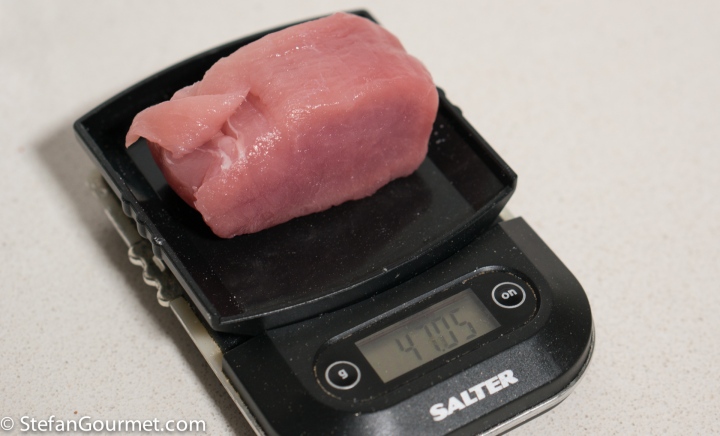 I weighed each piece with scales accurate to 0.05 of a gram. 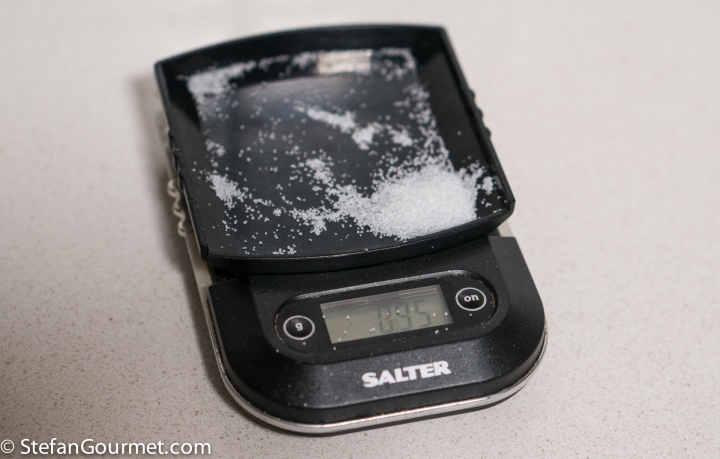 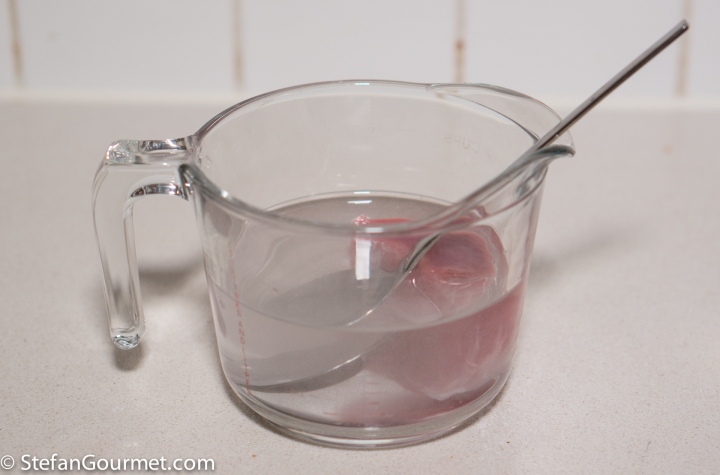 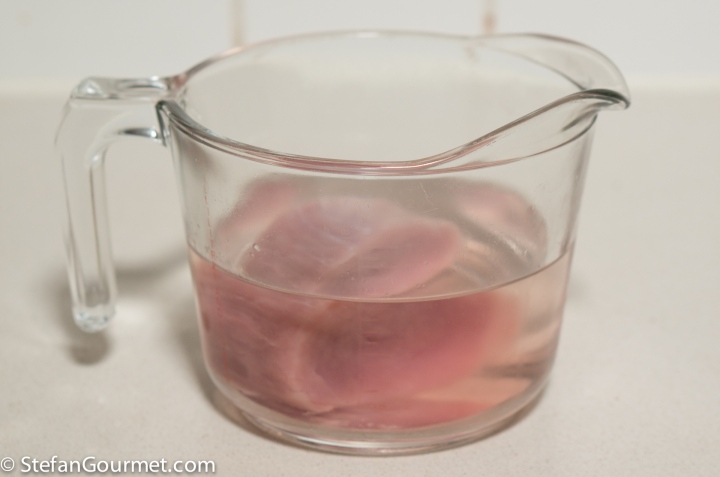 …and after 24 hours (or probably sooner, but that is how long I waited) an equilibrium will be reached and both water and pork will be 1.5% salt. Note the pink color of the water, indicating that the pork has released some juices into the water.

A second piece of pork was salted with 1.5% salt and vacuum sealed, then left in the refrigerator for 24 hours. 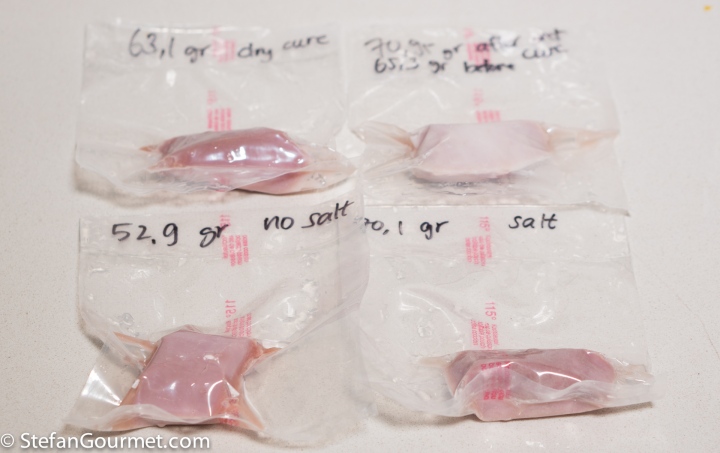 Then I cooked all pieces sous-vide for 1 hour at 57C/135F. (Note that I mislabeled the piece that was salted just before cooking sous-vide: its original weight was 47.05 grams, not 70.1 grams.) 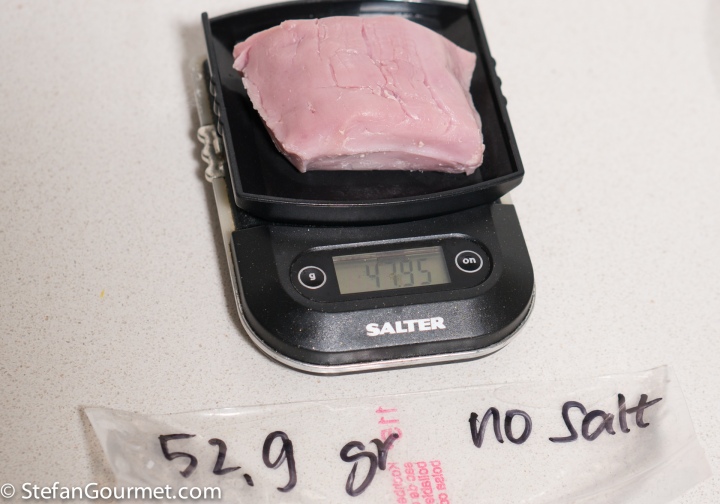 I patted each piece dry with paper towels, and weighed them again.

The results are shown in the table above. The piece without salt lost more juices than the others. Apparently the salt helps the meat to retain juices (this is the same result as in the previous experiment). There is no significant difference in loss of weight between the piece salted right before and the piece salted 24 hours before cooking sous-vide. The piece that was soaked in a brine for 24 hours, gained water first and in the end lost less juices than the others. (By the way, when you buy meat always make sure to read the label, because the weight gain by brining is how many supermarkets make you pay for injected water.) I corrected the salted ones for the weight in salt that was added.

And what about flavor? I salted the one cooked without salt right before tasting it. They were all good. The measured difference in juiciness between the one that wasn’t salted and the one that was, was not as noticeable as the 4% difference in weight loss may suggest. The main difference was that the salt was just on the outside, while the one that was salted before cooking was evenly salty throughout. The one salted 24 hours before had a slightly different flavor, a bit like ham. The brined piece was the most different from the other three. It was slightly more juicy, but had a diluted flavor compared to the others. It also was a bit more plump, but because it was also a bit bland I definitely preferred the pieces that were salted just before cooking sous-vide and the piece that had been dry salted 24 hours before. This blandness could be camouflaged by adding more salt, but I definitely prefer to taste more pork rather than more salt.

When cooking pork loin or pork tenderloin the conventional way (in the oven, on the grill, on the stovetop), brining may still be a good idea. On the one hand it will dilute the flavor just like it does when cooking sous-vide, but it will help to make the (tender)loin more tender and juicy when not cooking it sous-vide.

11 thoughts on “Pork Loin or Tenderloin Sous-Vide: To Brine or Not To Brine?”