Due to the increased popularity of horse meat that I already wrote about in my post on Braciole di Cavallo alla Barese, my butcher now displays his horse meat more prominently. This is why I noticed this fine piece of horse sirloin at only half the price of beef sirloin and with better marbling. I decided that it would be a nice idea to try and cook it sous-vide.

I expected that I would be on my own with this, because most of the home cooks that can afford sous-vide equipment sneer at horse meat (or live in a country where it is not very sale for human consumption such as the USA) and so I was not expecting to find much guidance online. Google confirmed that horse sirloin and sous-vide are a rare combination: I only found one post and that was for horse tenderloin and most importantly wasn’t real sous-vide but more of a poorly executed poor-man’s version of it (not even a thermometer was used).

The butcher told me that the meat is not as tender as beef sirloin. I wanted to cook it medium rare, so I decided to try 24 hours at 55C/131F. The result was quite strange: on the one hand it had the ‘powdery’ texture of meat that has been cooked sous-vide for too long, but on the other hand there was a lot of connective tissue that was still tough. With other types of meat such as beef and lamb I have only experienced the overcooked/powdery texture after the connective tissue had become tender. So for my next experiment I decided that I would need a higher cooking temperature (to tenderize the connective tissue) with a shorter cooking time (to prevent the overcooked texture).

I tried 62C/144F for 8 hours and that did the trick: tender meat with a good texture. The only problem of course is that now the horse sirloin ended up medium rather than medium rare. Which explains the part in parentheses  in the title of this post: it appears to be impossible to cook horse sirloin (medium) rare and end up with tender meat. This may be due to the fact that horses get a lot more exercise than cows do, so the muscles are used more and thus even a usually tender cut like sirloin stays tough when cooked medium rare.

I served the horse sirloin sous-vide with a red wine sauce, roasted potatoes, and roasted green asparagus with pecorino. Here is the recipe for those of you who’d like to try this at home 🙂 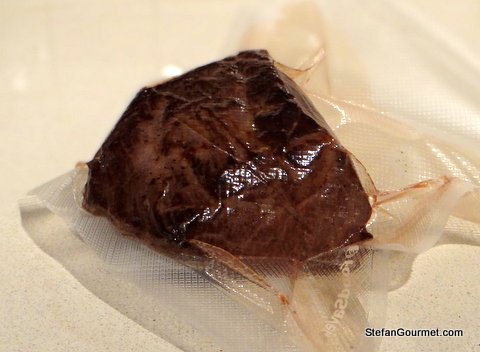 I pre-seared the horse sirloin before vacuum sealing it, but you could also vacuum seal it raw. Just rub it with salt and pepper before you do. If you do pre-sear it, make sure to let it cool to refrigerator temperature before you try to vacuum seal it, otherwise a lot of juices will be sucked out of the meat. 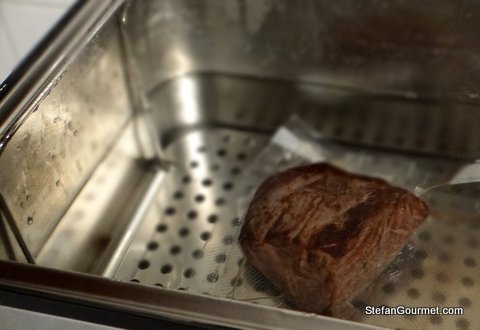 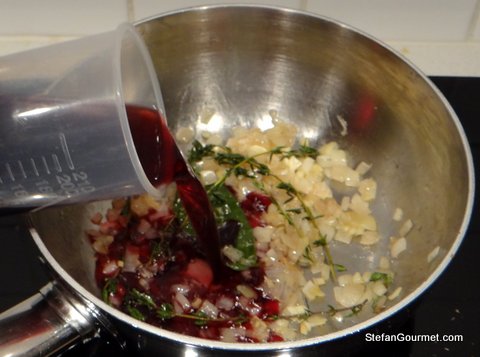 Sauté the shallot, garlic, bay leaf, and thyme for a few minutes in butter or oil. Add the red wine as soon as the shallot is golden. Do not let the garlic burn. 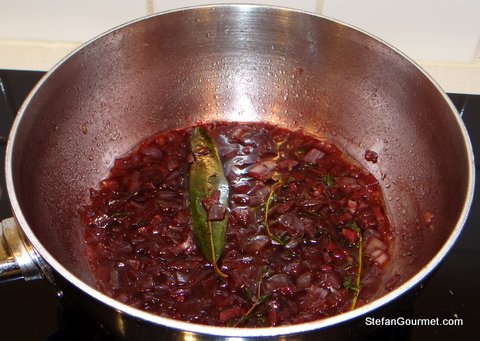 Simmer until reduced by half. Strain the concentrated aromatized wine into a container. 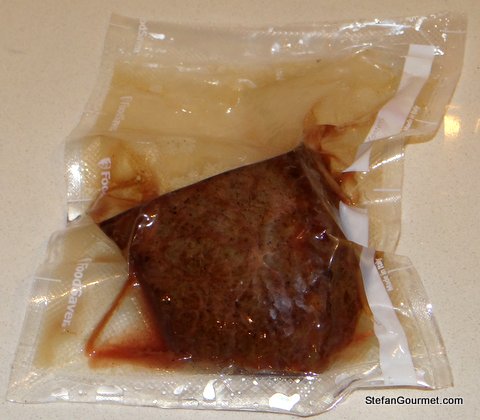 When the horse is cooked, there will be some liquid in the bag. 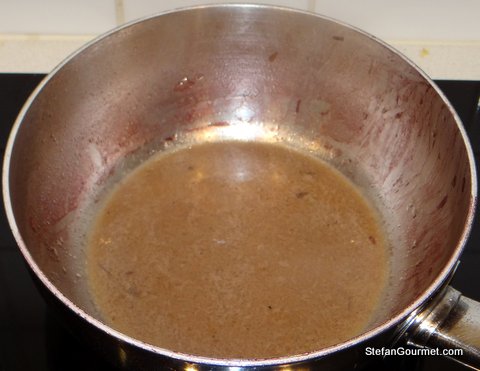 Catch the liquid in a saucepan and cook it briefly to let the solids coagulate. 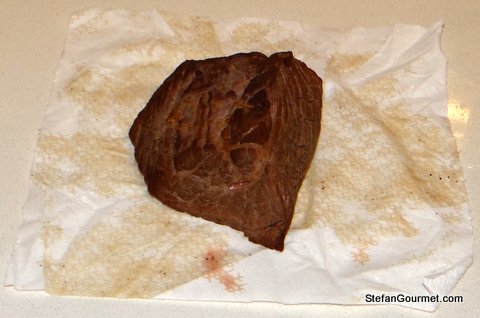 Pat the horse meat dry with a paper towel. 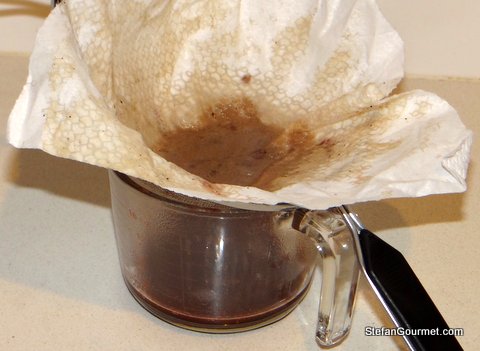 Use the same paper towel to filter the juices from the saucepan into the same container as the concentrated wine. 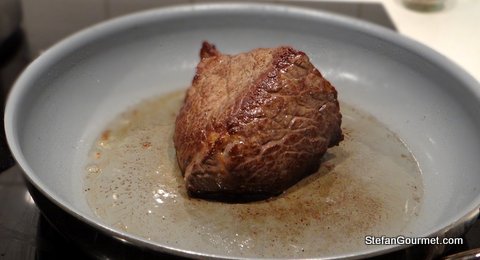 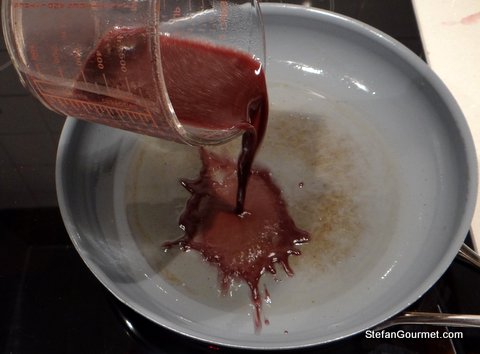 Turn off the heat and take the meat out of the pan and wrap it in aluminum foil to keep it warm while you finish the sauce. Pour any excess butter out of the pan. Deglaze the hot pan with the wine mixture. 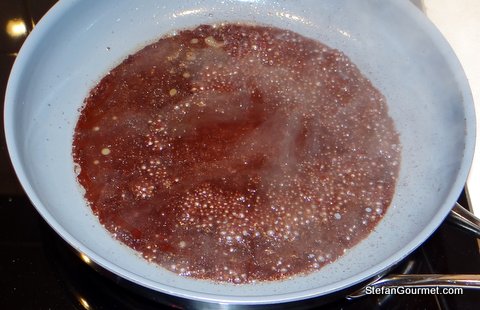 Allow to concentrate for a bit. 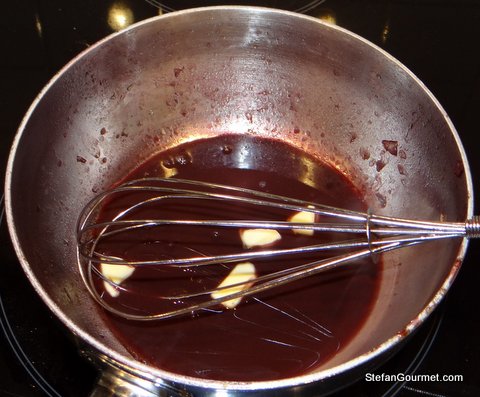 Beat some small pieces of cold butter into the sauce to bind it a little and make it shine. This is called mounting with butter. 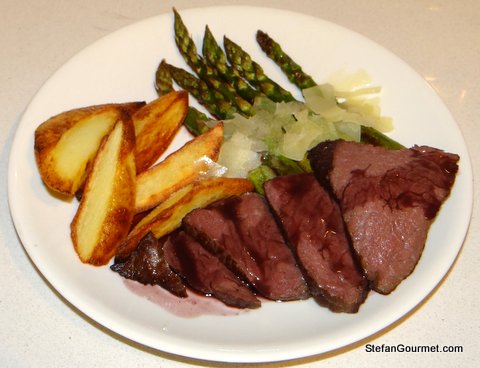 Slice the meat against the grain and season the slices lightly with salt. Serve with roasted potatoes and roasted asparagus with pecorino on warm plates. Drizzle the meat with the sauce. Drink the rest of the red wine with the dish.

20 thoughts on “Horse Sirloin and Sous-Vide: a (not so) Rare Combination”