Every year we celebrate our wedding anniversary with a dinner at a special restaurant. Due to the virus, the plans I had made well in advance for our 18th anniversary had to be cancelled. Luckily there are some good restaurants that are worth checking out closer to home, and restaurants are allowed to operate again under social distancing rules. Tribeca is the restaurant of chef Jan Sobecki in the town of Heeze, close to Eindhoven in the South of the Netherlands. Tribeca opened in 2016 and was called after the the neighborhood Tribeca in New York City, where the chef used to work. The restaurant has held two Michelin stars since 2017. There are three tasting menus to choose from, with some overlapping dishes: 6 courses for 135 euros, 8 courses for 165 euros, or 6 courses “high end” for 195 euros. We opted for the latter.

The first set of amuse bouche was very nice: crispy sweet potato with foie gras and dark chocolate, a clam with panko gratin, a yogurt cracker, and sweetbread.

Next was uni and smoked haddock, which was nice although the uni did not stand out.

The first course was crab with elderflower, bergamot, and caviar. This was paired nicely with a Riesling from Saar in Germany. Although there was a generous amount of caviar included in the dish, for the balance there should have been even more caviar (or less crab or perhaps less mayonnaise mixed in with the crab). 9/10 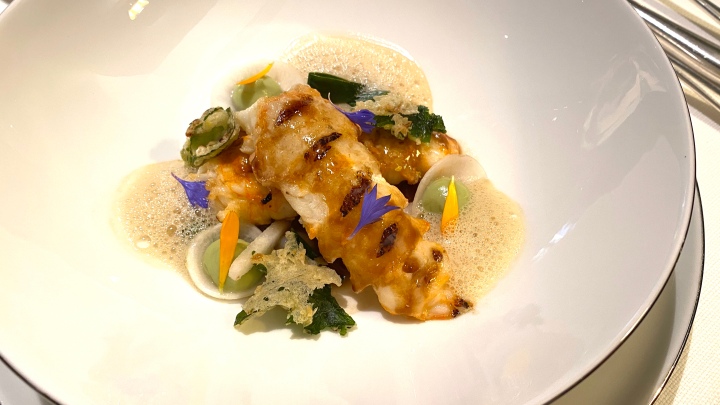 Scampi with nashi pear, avocado, and turnips, paired nicely with a Grüner Veltliner from Wachau in Austria. There were two plump scampi that were cooked perfectly with a nice char. The sauce was quite sweet, but did work with the wine. The flavor of the scampi was masked a bit by the sauce and charring, but the contrast between textures was very good. 9/10

Zander (sweetwater fish) with truffle, sunchoke, and a truffle beurre noisette sauce. We upgraded the wine pairing to a Puligny Montrachet Premier Cru that was very nice with it. The chef cooks in a French style in which sauces are important. The sauces are served on the side so you can use as little or as much as you like. 9/10 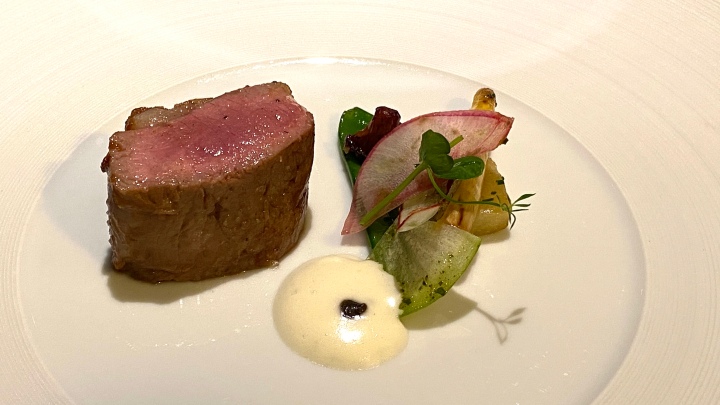 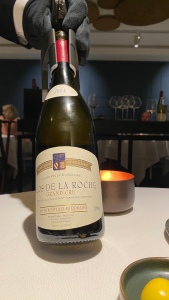 We again upgraded the pairing, this time to a Clos de la Roche Grand Cru, a Pinot Noir from Morey-St-Denis in Burgundy. The lamb was perfectly cooked and the fat was nicely crisped. 9/10

Kagoshima Wagyu, grade A4, with white and green asparagus, morels, and sorrel. This was paired with a 2016 Barolo. I was hesitant about this, as most Barolo needs at least 10 years of bottle age before it is ready to drink. The sommelier insisted that it was fine and that the winemaker made it to be enjoyed young. We tasted it first and it was okay, although it did not have the depth that an aged Barolo has. Probably because the winemaker used use less extraction to keep the wine softer. The Barolo did work well with the dish though. The contrast between the crunchy asparagus and creamy Wagyu was quite nice, although I’ve had Wagyu with a more beefy flavor than this. 9/10 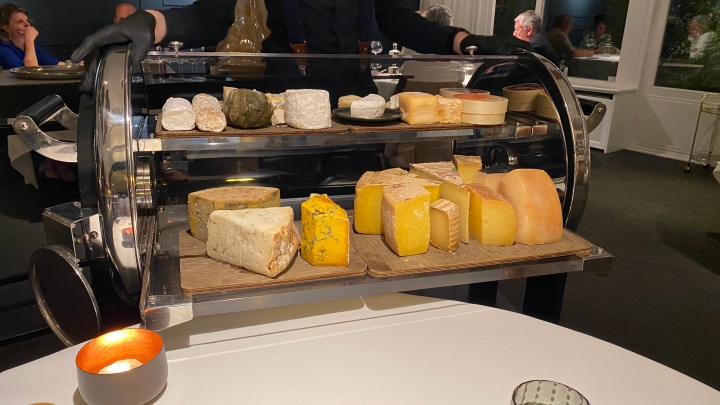 We opted for cheese instead of a sweet dessert.

We decided to go for blue cheese only, and combined it with a glass of 2004 Château d’Yquem. The second cheese from the left is not Queso Cabrales, although it did resemble it, but a similar cheese that was aged in a bunker on the Dutch island of Texel. As can be expected from a restaurant at this level, the cheese were served at the perfect temperature and with perfect ripeness.

Besides being cheese lovers, another reason to skip dessert was that sweets were served with coffee anyway.

The food is what can be expected of a two star restaurant and of a constant high level. 9/10 for the food.

The wine pairings were good, although we did so many upgrades to celebrate our anniversary that I can’t fully judge the usual wine pairing. But the sommeliers do seem to know what they are doing. I did notice that the restaurant has a very limited selection of older vintages on the wine list, which isn’t strange if you consider the restaurant has been open only since 2016.

The service was excellent and very friendly. It was great to see that all of the staff was very involved with the food and wine and genuinely had a passion for what they were doing. 9/10 for the service. We didn’t see the chef at all and forgot to ask whether he is just shy or wasn’t there this evening.

12 thoughts on “Dining in the Netherlands: Tribeca**”