On December 23 we had dinner at one of the best restaurants in Italy, La Torre del Saracino in Vico Equense. The chef Gennaro Esposito is a master at making very simple local dishes with high-quality but simple ingredients taste delicious. The simplicity can be a bit misleading, because you don’t get two Michelin stars for ordinary food. Since we liked one of the dishes with oysters, cauliflower, pecorino cheese and pasta so much, I decided to have a go at recreating it from memory. I did not ask the chef how he had made it, I just tried to remember what I had tasted and thought how I would do it. The result was obviously not as good as at the restaurant, but still quite pleasing. Since it’s a very original recipe and not that hard to do, I’m sharing it with you below. 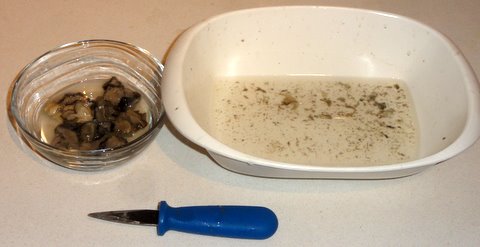 Shuck the oysters and put them in a bowl. Make sure to catch all of the oyster water. 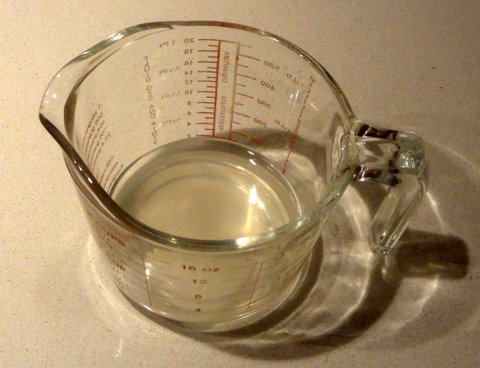 Sieve the oyster water through a sieve lined with a cheese cloth, clean dish towel or paper towel.

Cut the cauliflower into individual florets to obtain 300 grams (2/3 pound) of florets.

Cut pecorino cheese into small dice and bake them on parchment paper in the oven at 180C/350F for 10-15 minutes until golden. 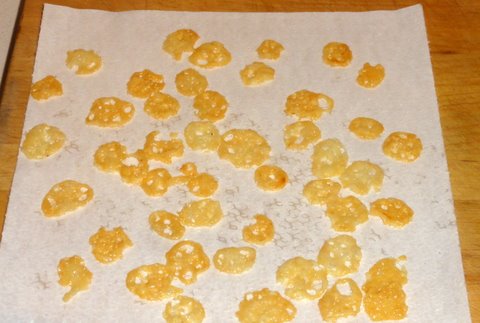 Let the baked pecorino cool on paper towels to drain some of the fat.

Cut the green parts off the leaves and discard the white part.

Wash the grean bits and dry them on paper towels. 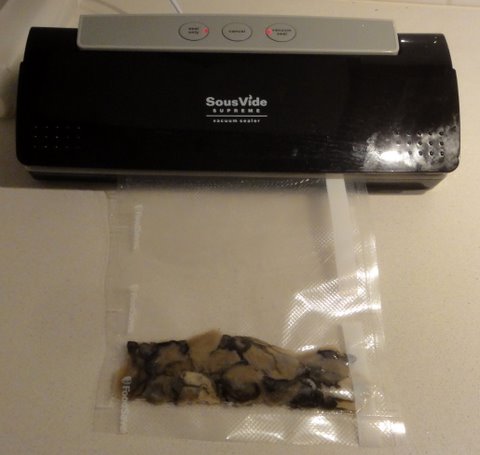 If you own sousvide equipment, seal the oysters in a pouch (leaving a long sleeve as shown to prevent oyster liquid to be sucked into the machine) and cook them for 20 minutes at 48C/118F.

If you do not own sousvide equipment, you can probably add the oysters raw and toss them with the hot pasta at the end to cook them slightly. I have not tried that.

Heat a large pot of salted water and bring to a boil. Boil the pasta according to package instructions. Add cauliflower florets to the same pot for the last 10 minutes.

Heat about 2 tbsp of olive oil in a frying pan and add the clove of garlic whole until golden (for maximum flavor tilt the pan as shown). Discard garlic and add the reserved oyster water. Cook very gently to thicken the oyster water a bit.

Deep-fry the cauliflower leaves in hot oil (180C/355F) a few minutes until crispy.

When the pasta and cauliflower are done, drain and add to the frying pan with the oil and oyster water. Add the cauliflower leaves, oysters and pecorino crisps and toss to mix. Taste to adjust the seasoning with salt and freshly ground white pepper. If using large oysters, slice them in 2 or 3 pieces before adding. Serve on warm plates. 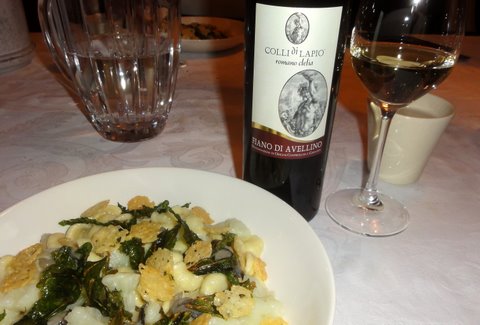 This dish from Campania paired well with this Fiano di Avellino from the same region. 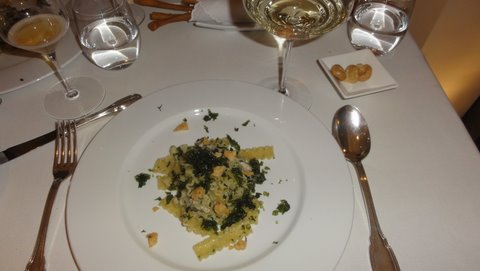 This is what the dish looked like at Torre del Saracino. As you can see they used a different shape of pasta that I did not have on hand when I tried the dish.