Duck breast is a very tasty type of meat, but it is a bit different from other meats and therefore it may be a challenge to cook it perfectly tender and juicy. If you know how, it is actually not that difficult. And this time I’m not going to write as in many other posts that you should use sous-vide, because cooking it in the oven is almost as good and will give excellent results as well. I cooked two identical duck breast fillets to compare sous-vide versus oven, and the results were remarkably similar. Sous-vide was a little bit better (slightly fuller taste, slightly more juicy), but the duck cooked in the oven was still delicious!

In the photo above, the slices of duck on the left are from the duck breast cooked in the oven, whereas those on the right have been cooked sous-vide. As you can see it is hard to tell them apart visually and they are nicely medium-rare in the center. Personally I don’t like a thick layer of fat, and that is why the meat close to the fat side is slightly overcooked. The only way around is to remove the skin, cook it seperately and reattach it again with ‘glue’. But that is not really necessary for a very nice result. 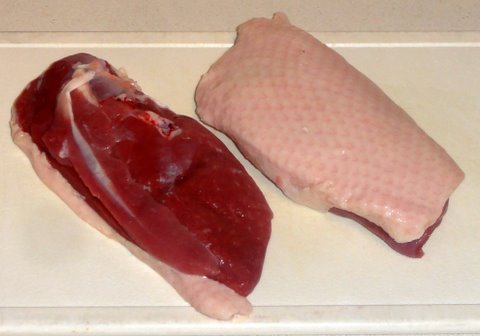 Always use fresh duck breast that has not been frozen. Freezing the meat will give it a ‘livery’ taste and make it less juicy. 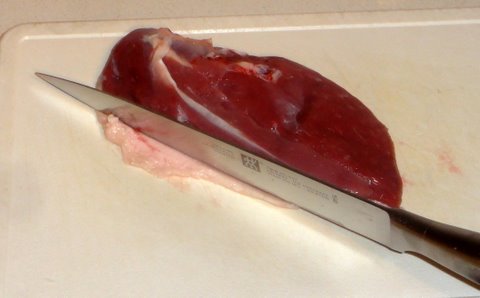 Optional step: lay the breast down on the fat side and cut away any fat that sticks out.

Score the fat side with a sharp knife to create a crosswise pattern. Make sure not to pierce the meat underneath. This scoring helps to render the fat.

Rub the meat with salt on both sides and with freshly ground black pepper on the meat side.

Put the meat on the fat side in a hot frying pan without adding any butter or oil and let the fat render over medium-high to high heat until the fat side is nicely browned (about 5 minutes).

You want to do this as hot as possible not to overcook the meat close to the fat more than necessary, but you don’t want to burn the fat either. 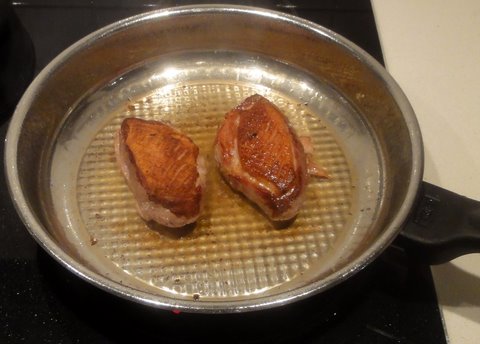 Brown the other side for 1 minute in the duck fat. 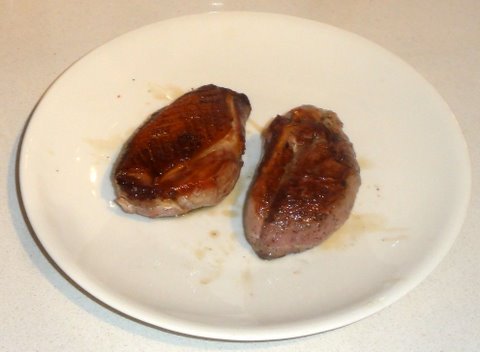 Take the meat out of the frying pan and put on a plate with the meat side down (in the photo the right-hand one is upside down to show how nicely browned the meat is). 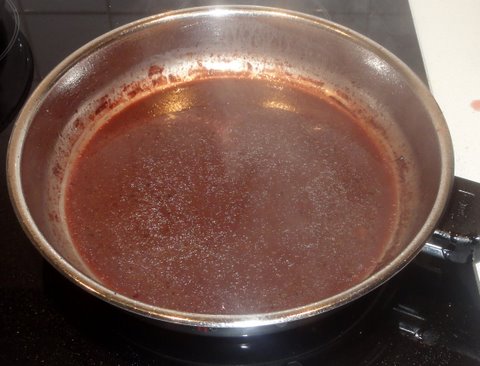 Discard the fat from the pan and deglaze with equal amounts of red wine and poultry stock (definitely low-salt and preferably home-made, preferably duck stock but chicken is fine as well). Let this simmer gently to about a quarter. Right before serving, heat it up and mount with cold butter for a great sauce. (For a more elaborate sauce, discard not all but most of the duck fat and sauté a minced shallot with a bay leave and some fresh thyme sprigs before deglazing with red wine and stock. Sieve the solids out before mounting with butter.)

Now you have two options. If you have a sous-vide water bath, let the duck breast cool to room temperature and seal in a vacuum bag. Cook for 2 hours at 55C/131F. It will become even more tender if you leave it in longer, 4 or even 6 hours.

If you have the time and an oven that can be set to 65C/149F, put the meat with some juices and with the fat side up (both to prevent drying out) in an oven-proof dish in the oven for 2 hours. Since you are cooking the meat at such a low temperature, there is no need to rest it afterwards. If you use an instant read meat thermometer (the probe of which is visible in the picture), you will notice that after around two hours the center of the meat will be around 55C/131F. You will also notice that the temperature changes very slowly by that time, so you could also leave the meat in for half an hour or so longer. However, if your oven is accurate enough you do not even need a meat thermometer. (To understand why after two hours in a 65C/149F oven the core temperature will still be only 55C/131F, think of the energy needed for evaporation of the juices. Because of the evaporation, until the meat is completely dry it won’t reach 65C/149F. This is also why you have to put some juices in the dish, otherwise the outside of the duck will dry out too quickly.)

If you are in a hurry, set the oven to 120C/250F and use a meat thermometer. This will take half an hour or so. Take the meat out once the core temperature is 53C/127F and let it rest, wrapped in aluminum foil, for around 10 minutes. (The meat will be hot on the outside and cooler on the inside, and during the resting time the core temperature will increase by heat diffusion. That is why you take it out a few degrees lower than the desired core temperature.)

Before serving, carve the meat into slices with a sharp knife.

By serving it in slices, the meat will seem even more tender. Serve with the red wine sauce. Good with baked potatoes and steamed broccoli.

Here I’ve served the duck breast with a red wine sauce. A classic preparation is of course canard à l’orange with oranges, but if you’d like to drink red wine with the duck then a red wine sauce is a much better idea. (Duck with oranges pairs very well with a sweet late harvest gewürztraminer (vendanges tardives), but that may not be your cup of tea.) As a red wine, I recommend a full-bodied oaked pinot noir (e.g. red Burgundy from a good year) or a properly aged Barbaresco or Barolo.