When I started this blog, I wrote that I would “strive to share every single interesting experience with respect to food and wine”. This means sharing both the successes and the failures. Although the result of this experiment was certainly edible and not bad, it was not the “magical” result that I was hoping for.

I’m going through “Modernist Cuisine”, the amazing set of books by Nathan Myhrvold et al. On pages 2-24 and 2-25 the “Girardet Method” for broiling fish is described. Fish is simultaneously broiled and poached in white wine. It didn’t look too hard to do and I like fish, so I gave it a try. Here’s what I did. 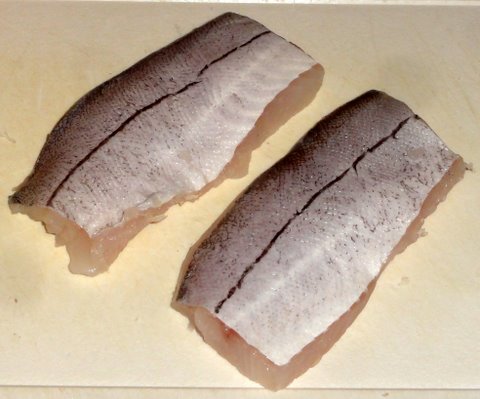 I had bought some haddock fillets, which was the only fish with skin that I could get. This is probably the most important thing that went wrong: the haddock was only about 1 cm (0.4″) thick, which was probably too thin for this preparation.

Modernist Cuisine doesn’t specify a recipe, so I invented something along the way. I salted the fillets on both sides and waited about half an hour (with the fish in the fridge) to let the salt penetrate.

I preheated the broiler and sliced two shallots.

I patted the skin side of the fish dry with paper towels and brushed the skin lightly with olive oil.

The most suitable pan I had (it shouldn’t be too large since I was only going to cook two small pieces of fish fillet) was an ovenproof saucepan. I put the shallots on the bottom, then put the fish on top and added dry white wine such that only the skin remained dry.

Then I put this under the broiler, checking every minute to see whether the skin was getting golden and crispy because that would be my cue to take it out of the oven. This was the case after 5 minutes, close to the time of 6 minutes indicated in the book. 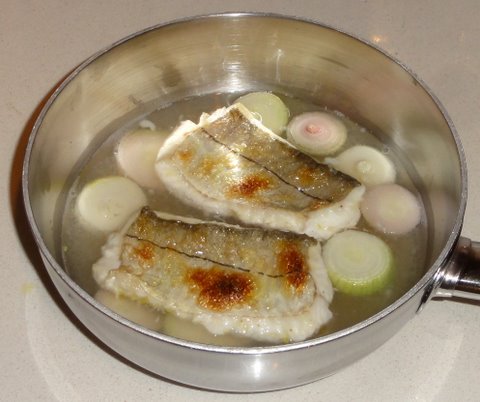 When I took it out, I noticed that the shallots had not stayed on the bottom of the pan but were now floating, thus raising the fish somewhat out of the wine. 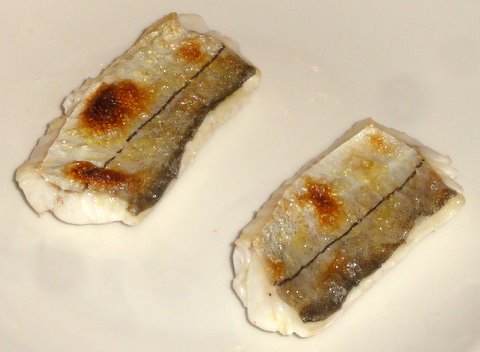 The fish was okay (better than you would get in a lot of restaurants, since fish is often cooked to death) but, since I am by now spoiled with juicy fish cooked sous-vide, after all this trouble I was disappointed it was a bit dry. Also the skin wasn’t crispy despite the darker patches you can see. I did like the slight taste of white wine that the fish had picked up.

On the picture in the book the shallots do not float. There seems to be more of the fish sticking out of the wine than just the skin. So it may be that the piece of fish above the water is needed to keep everything down. With a thicker piece of fish that will be easier to accomplish. So next time I will use a much thicker (4 cm, 1 1/2 inch) piece of fish to see whether that will work any better. I will also try to find fish with a darker skin, because that will crisp faster (as also pointed out in the book, light skin reflects more radiant heat from the broiler). I’ll keep you posted on the results!

10 thoughts on “Experiment with the Girardet method for broiling fish”