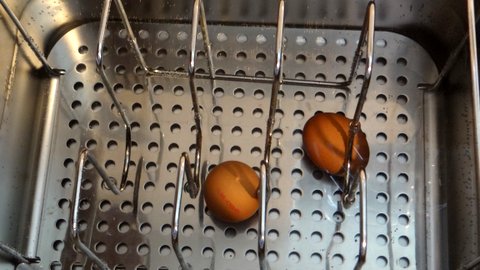 For Easter it is a tradition in the Netherlands, as in many other places around the world, to eat lots of eggs. Conor’s post about poached eggs reminded me that I had not yet blogged about eggs sous-vide. Cooking an egg sous-vide was the first thing I tried with my sous-vide water bath about 15 months ago, that was basically the ‘christening’ of the water bath. At 64C/147F The egg whites came out a bit softer than I liked. I needed to go to 67C/152F to get the egg whites just set, but by then the egg yolk didn’t have the nice ‘custard’ texture anymore that is the whole point of cooking eggs sous-vide. I then tried to cook an egg sous-vide at 64C/147F first and then for a minute in boiling water to set the egg white while keeping the egg yolk soft, but it was almost impossible to get the timing right for that. So I had basically given up on eggs sous-vide.

I still thought I should blog about sous-vide eggs at some point, and since I don’t mind eating soft eggs as long as it’s on a slice of home-baked bread I thought Easter would be the perfect time for it.

Please note that since eggs are very sensitive to the exact cooking temperature, the calibration of the water bath may be an issue. I think it would be difficult to obtain consistent results if your water bath is less accurate than 0.5C/1F. The way eggs should be cooked is also a matter of personal taste. So it is well worth it to experiment which time and temperature are best for your taste and your water bath.

I made a small hole in the round side of each egg before cooking (thus opening up the air chamber in the egg) as I would also do for conventional boiling. This is to prevent the egg shell from bursting when the contents expand due to the heat. 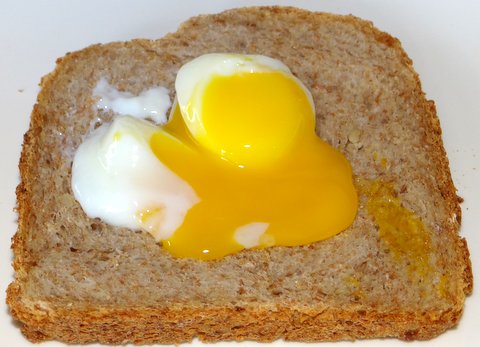 First I repeated my first experiment: 45 minutes at 64C/147F. Perhaps this egg was less fresh than the one I did 15 months ago, because this time the egg yolk was still completely soft. 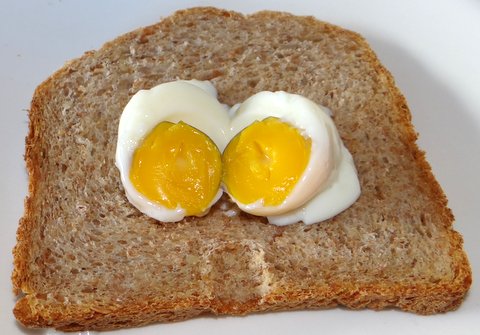 My next experiment was overnight, since I wanted to have an egg sandwich for breakfast without having to wait. After 10 hours at 65C/149F the egg white was still a bit soft, but the egg yolk was set (not unpleasantly so) and even had a bit of a dark edge as you can see in the photo. Since this egg yolk was mostly like an egg boiled for 4 minutes or so the old-fashioned way and the egg white was actually worse, I would prefer to just boil the egg for 4 minutes or so.

Something I had not tried yet, was to cook an egg sous-vide at 64.5C/148F. It seems a bit silly to cook something to half a degree, but since it’s a whole degree in the Fahrenheit scale I thought what the heck 😉 And I was glad I tried it, because this was the best sous-vide egg yet! The white was soft but set enough to eat on bread, and the yolk had a very nice texture. Perhaps I’ll try a slightly longer cooking time for an even better result next time.