One of the traditional treats for Easter in the Netherlands is a “paasstol”: a bread filled with raisins and almond paste. The same bread is also made with Christmas and then called “kerststol”. Other than the name, there is no real difference. In many cases the filling also contains candied fruits and hazelnuts, but I prefer just raisins. A similar bread is made in Germany and then called “Stollen” (Weihnachtsstollen, Christstollen).

Instead of proper almond paste, a store-bought stol will in many cases contain ‘confectioner’s paste’ (“banketbakkersspijs”) which is actually made from beans instead of almonds. It is of course cheaper but doesn’t have the real taste of almond paste.

Put the raisins in a bowl with the rum and the spices, and stir. Let stand for at least half an hour.

Make a dough from all the ingredients listed and knead it by hand for 5 minutes (dust your hands and the work surface with flour).

Let the dough rise for 10 minutes.

Drain the raisins (if not all the rum has been absorbed). Roll out the dough with a rolling pin to a thickness of about 1/2 cm (1/4 inch). Spread out the raisins on top. Now roll up the dough and knead it some more. 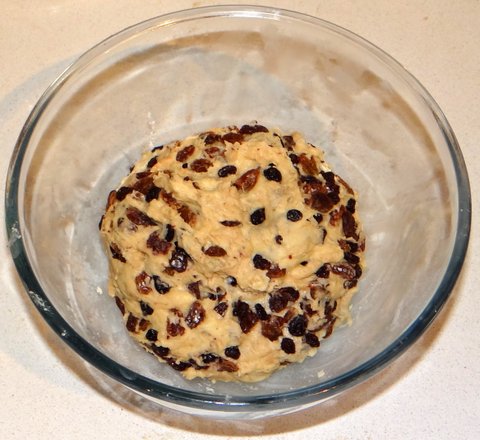 Let the dough rise in a warm place (the oven with the light turned on works great for this) for 20 minutes.

Flatten the dough and make a groove in the middle with a rolling pin. Knead the almond paste, shape it into a cylinder and put it in the groove. Fold over the dough to close the loaf.

Let the stol rise in a warm place for 30 minutes. Preheat the oven to 180C/350F. Bake the stol  in the middle of the oven on a baking sheet lined with parchment paper for 40 minutes. 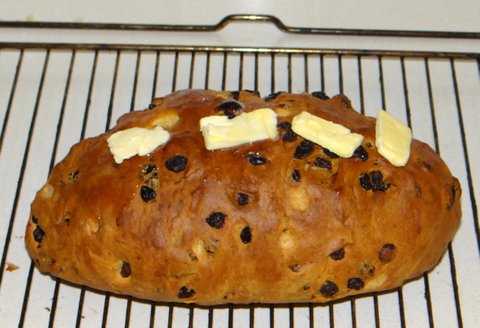 Let the stol cool on a rack. While it is still hot, put some butter on top and spread it out with a knife as soon as it melts.

Sprinkle generally with confectioner’s sugar to make the frosting.

The stol is ready to eat once it has cooled down to room temperature. I like to eat it just like it is, but some people like to put butter on a slice of stol or take out the almond paste and spread it over a slice with a knife.