Beef short ribs are a very popular cut to prepare sous-vide, because they are so flavorful. How do you like beef short ribs? Braised and unctuous like in the photo above? Then cook them sous-vide for 24 hours at 74C/165F. Or do you prefer them juicy and tender with the texture of steak or prime rib as in the photo below? Then go for 48 hours at 57C/135F (see this post how I determined that is the best time and temperature to get steak-like beef short ribs sous-vide). Before sous-vide became popular, only the braised style was known because you can also cook them low and slow like that in the oven or in a closed BBQ grill. Now with sous-vide you also have the possibility to serve them with steak texture, but with much more beefy flavor than a regular steak.

Both styles are good, so it is a matter of personal preference which style you choose to prepare. The ‘braised’ short ribs are well done, fall apart tender and unctuous because all of the connective tissue (collagen) has dissolved into gelatin. Most of the fat has rendered from the meat, but thanks to the gelatin you don’t miss it at all. The ‘steak-like’ short ribs are medium rare, very tender and juicy, with a very beefy flavor. The fat has hardly rendered and some of the connective tissue (especially the ‘skin’ around the bone) is still so tough that you have to trim it away when eating. 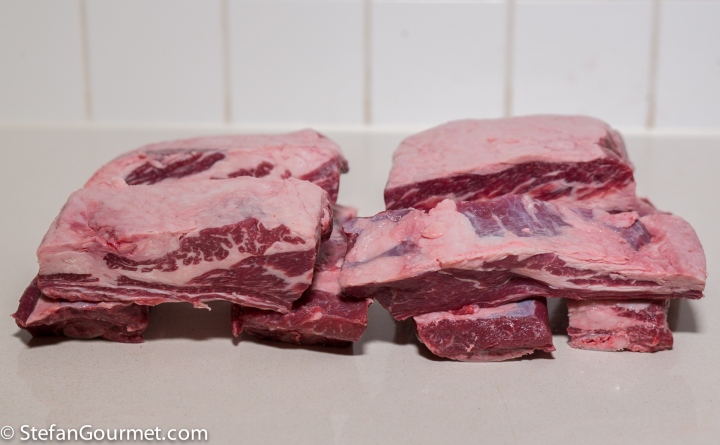 Both preparations started out as English cut short ribs. Beef short ribs are cut from what is known the ‘short plate’ and are the lower part of ribs 5 through 8 (counting from 1 for the rib nearest to the head). ‘English cut’ just means that you cut in between the bones. Watch this video or show it to your butcher if needed, because in many countries (like the Netherlands) short ribs are not a commonly available cut of beef. 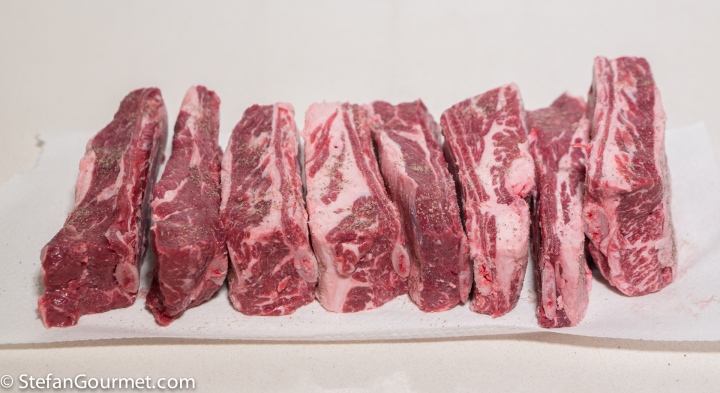 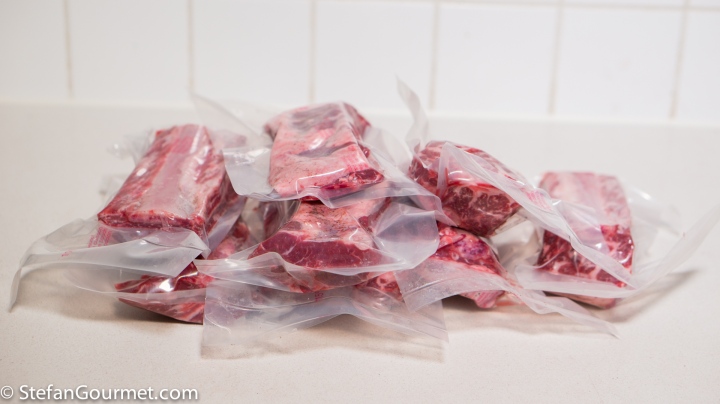 …and vacuum seal them individually.

If you are going to cook them at 57C/135F, then they need to be blanched or scalded in boiling water for about 30 seconds to prevent the development of an unpleasant smell.

This step will kill any lactobacillus on the surface. When cooking the short ribs at 74C/165F you can skip this step, because the lactobacillus won’t survive at that temperature.

As you can see the fat has hardly rendered and the meat has released quite a bit of beef juices into the bag. The proteins in these juices have only been cooked to 57C/135F and so they will coagulate (break up) if you try to reduce them into a sauce without adding a thickener like corn starch or arrowroot. 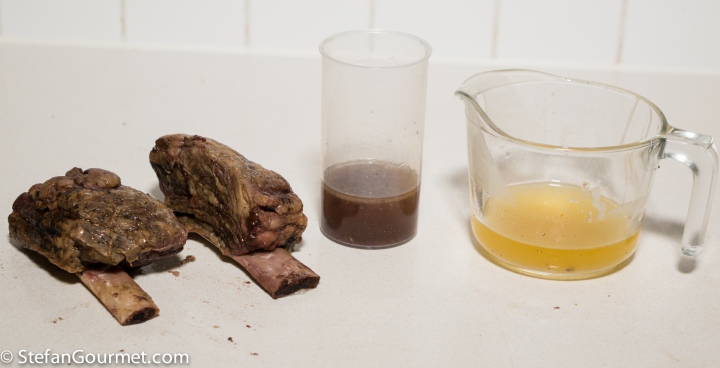 A lot of fat has been rendered from the meat. It is a good idea to separate the liquid from the bag into meat juices and fat. The fat will float on the top, so if you pour the liquid into a narrow container it is quite easy to remove it with a spoon. As these meat juices have been cooked to 74C/165F, they can be used to make a reduction sauce without coagulation problems.

You can sear the ribs in vegetable oil, but if you cooked them at 74C/165F it is much better to use the rendered beef fat from the bag to enhance the beefy flavor. Do only use about 4 tablespoons of the beef fat and reserve the rest for another use (the fat is awesome for pasta with roasted cauliflower).

…but when cooked at 74C/165F the bone will fall out (remember they are ‘fall off the bone’ tender!). 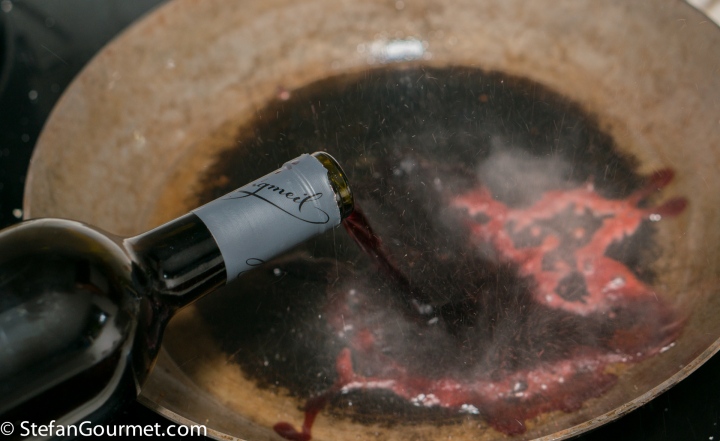 After browning, wrap the short ribs in aluminum foil while you finish the sauce. Deglaze the pan with red wine.

If you cooked the short ribs at 57C/135F, add a teaspoon of cornstarch or arrow root to the reserved juices, and whisk well to incorporate. (To prevent lumps, you could also mix the cornstarch with cold water first and then add it to the juices.)

Add the juices to the pan with the wine. 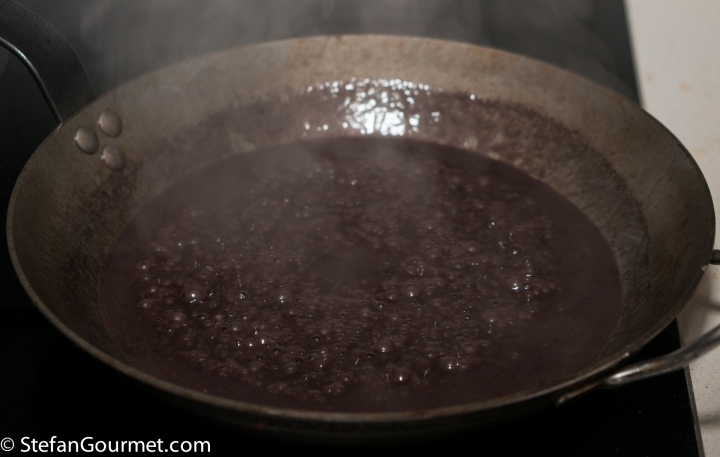 And reduce over medium heat until the sauce has thickened. Taste and adjust the seasoning with salt and freshly ground black pepper. (Depending on the wine you used, you may also have to add a tiny pinch of sugar.)

It goes without saying this should be paired with a hefty full-bodied red wine. However, the wine style that will work best depends on the cooking temperature of the short ribs. For 57C/135F a more astringent wine that is younger or from a cooler climate would be the best choice, think Bordeaux such as Saint-Emilion or Pomerol, or Barolo, or Cabernet from California or Chile. But for short ribs cooked at 74C/165F you will need a more velvety wine that has been aged or from a warmer climate like Chateauneuf-du-Pape, Cannonau di Sardegna, Primitivo from Puglia, Australian Shiraz, or Californian Zinfandel.

This fig and almond tart is simply delicious.

7 thoughts on “Beef Short Ribs Sous-Vide: Like Steak Or Braised”