Welcome to Stefan’s Gourmet Blog!  You can find an overview of my sous-vide recipes as well as times and temperatures by clicking on “Sous-Vide” above.  If you like what you see here, you can sign up on the sidebar to receive an email whenever I post a new recipe.

I’ve only known about sous-vide cooking for less than two years and have owned a sous-vide water bath for about 15 months now, but the early adapters of sous-vide cooking in the home kitchen were already discussing recipes and techniques on eGullet in 2004. I am reading through all of the posts on this forum on my iPhone during my commute on the train, and have read almost 3000 posts so far. There is a wealth of information there, and fun to read even though a lot of information is contradictory or duplicated. A topic that is covered to some extent is favorite sous-vide recipes, and short ribs are mentioned often in this category. I have eaten short ribs only once, teriyaki style at a restaurant called Roy’s in Honolulu. I am not sure if those were cooked sous-vide, but they were outstanding. So I was very curious to try to cook them sous-vide myself!

Now short ribs are a cut of beef that is unknown in the Netherlands, and my regular beef suppliers could not supply them. So I was surprised that after almost giving up on ever finding them, I ended up obtaining short ribs from a butcher that I normally skip because he’s too ‘middle of the road’ for me. I went there because my usual butcher had run out of pancetta and I needed it for a recipe. On a hunch I asked about short ribs as well. He had never heard of them, but was willing to call his supplier for me. A week later I had my first batch of short ribs. The supplier had actually looked up on the internet what the cut was exactly. 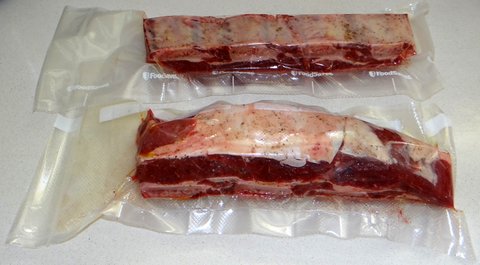 For those of you who do not know this cut,  short ribs are beef ribs from the lower (ventral) section, from the 6th through the 10th rib. It is called the short plate, and the ribs are called short ribs not because they are short in length, but because they come from what is called the short plate. The short plate is located right in front of another inexpensive, chewy but flavorful cut, the flank steak, and just behind the brisket. The bones are almost straight and they have 2-5 cm (1-2 inches) of meat on top. The best cut is called “English cut short ribs”. (Source: Zen of Beef Ribs)

It took me three tries to find the perfect temperature. It goes to show again that with sous-vide cooking, only 2-3C/5F can make a huge difference in texture. For these experiments, I simply rubbed a slab of short ribs with salt,  freshly ground black pepper, and some extra virgin olive oil, and sealed them into a pouch.

According to Modernist Cuisine, the ‘best bet’ for beef short ribs is 72 hours at 60C/140F. This is the first temperature I tried. The taste was OK, but I was not impressed and the texture was too ‘loose’. The meat was almost falling apart.

My next experiment was 72 hours at 55C/131F, usually an excellent temperature for beef. The taste was amazing and the meat was very juicy, but it was too chewy.

I didn’t give up and did a final try: 48 hours at 57C/135F. Wow! Amazing taste, very juicy and tender. I now completely understand all the raves on eGullet! And now that I have read some more on the forum, I’ve noticed that 48 hours at 57C/135F is also what is recommended there most often. So perhaps I should have started with that in the first place. Oh well…

Now that I know the perfect temperature, I will try to develop some nice recipes. I think my next experiment will be teriyaki, as I liked that very much at Roy’s.