When I saw venison short ribs available, I couldn’t resist buying some as I really like beef short ribs cooked sous-vide and was curious what venison short ribs sous-vide would be like. It is important to note that these were short ribs from farmed venison (from New Zealand), as wild venison may require a different time and temperature when cooked sous-vide. From my previous experiences with other cuts of the same venison I made an educated guess that a lower temperature and shorter time would be required compared to regular beef short ribs cooked sous-vide. My educated guess was 36 hours at 55ºC/131ºF, but to be on the safe side I checked after 24 hours. Then they were still slightly chewy, and after 36 hours they were perfect. Still medium rare pink, juicy, and tender.

As I wanted to serve the venison for a dinner party I didn’t want to serve the venison with a lot of fat and connective tissue, and thus had to trim that away (which is only possible with trimming away the bones as well). The only problem was that compared to beef short ribs, they were quite a bit smaller and so after removing all that stuff, what was left was just thin strips of meat. And so I decided to use transglutaminase (meat glue) to turn those trips into a roulade!

I used the trimmings to make a stock, which I then used to make a delicious red wine rosemary venison sauce to be served with the meat. As sides I decided on mushrooms sauteed with parsley and garlic (funghi trifolati) and fava beans. I don’t like fava beans when they are shelled only once, but when they are shelled twice they are quite lovely. The only drawback is that it took me about 20 minutes to end up with 68 grams (2.4 oz) of fava beans, starting with 522 grams (18.4 oz), or a 13% yield.

This dish was a lot of work, but it was absolutely worth it. The meat was very flavorful and the sauce was simply divine. If you don’t want to or don’t have the ability to use sous-vide and transglutaminase, you could still prepare something similar starting with loin of venison and cooking that in the oven to a core temperature of 55ºC/131ºF. The meat would be as juicy and as tender, just not as flavorful as the short ribs cooked sous-vide.

The slabs of venison short ribs are quite a bit thinner than beef short ribs. Count on at least 300 grams (.66 lb) per serving, as you will be trimming away more than half  (bones, fat, and connective tissue). 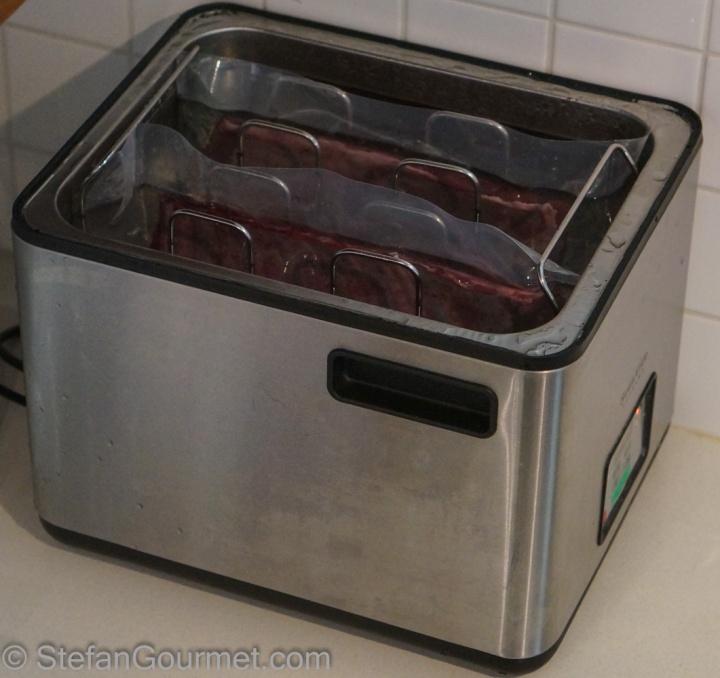 After cooking sous-vide they will have released some juices… 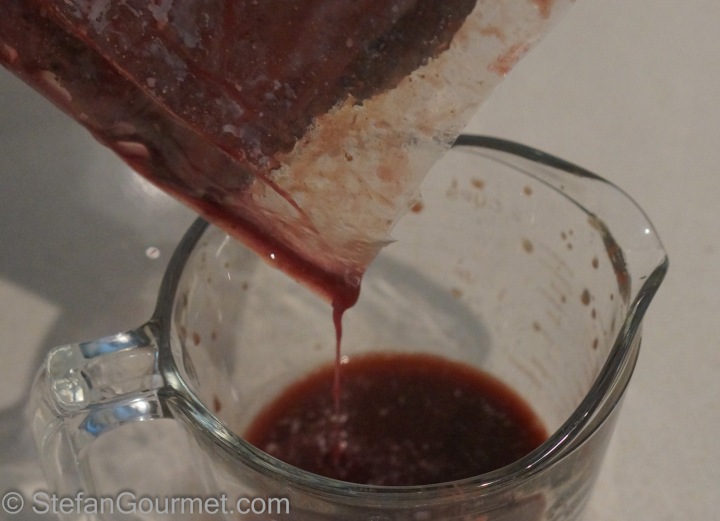 …that you should reserve to use for the sauce. 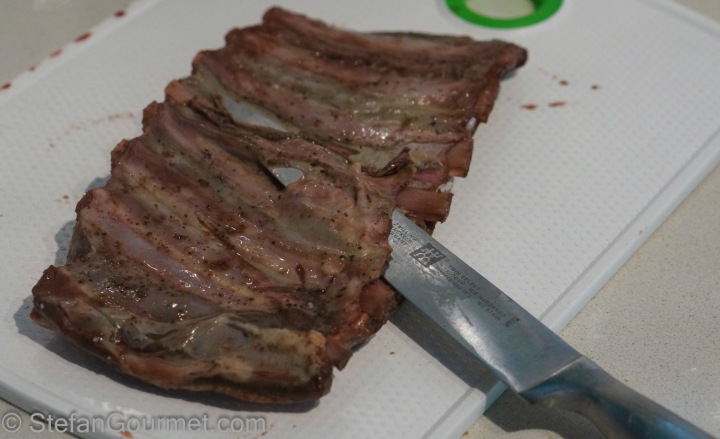 Start by trimming away the ‘silver skin’ that covers the ribs.

Trim away as much of the fat and connective tissue as you can, trying to keep the meat intact as much as possible. 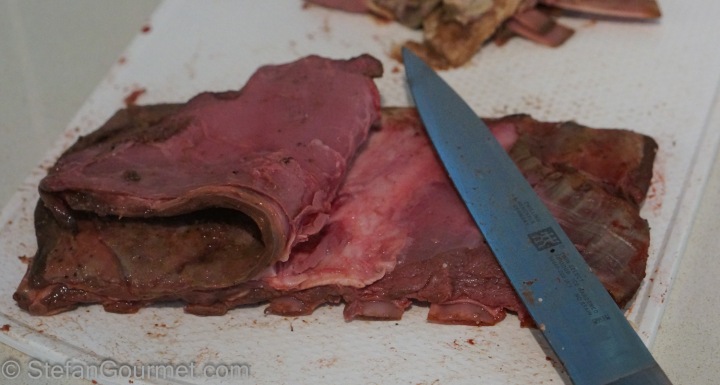 There are also layers of meat and fat thay you need to separate.

Continue until you have all the nice meat, but reserve all the bones and trimmings for making the sauce.

Make a slurry of transglutaminase (Activa RM or Activa EB) and cold water in a 1:4 ratio by weight. Brush the meat with the slurry.

Roll up the meat to form a roulade.

Wait until the meat has cooled off to at least room temperature (refrigerator is even better), then vacuum seal the roulade.

Cook sous-vide for 4 hours at 55ºC/131ºF to allow the glue to set and to let the meat warm up to serving temperature.

Roast the trimming and bones to enhance their flavor. Preheat the oven to 190ºC/375ºF (fan forced). Combine the trimmings and bones with carrot, tomato, celery stalk, and onion in an oven dish, and toss everything with a bit of olive oil to coat. 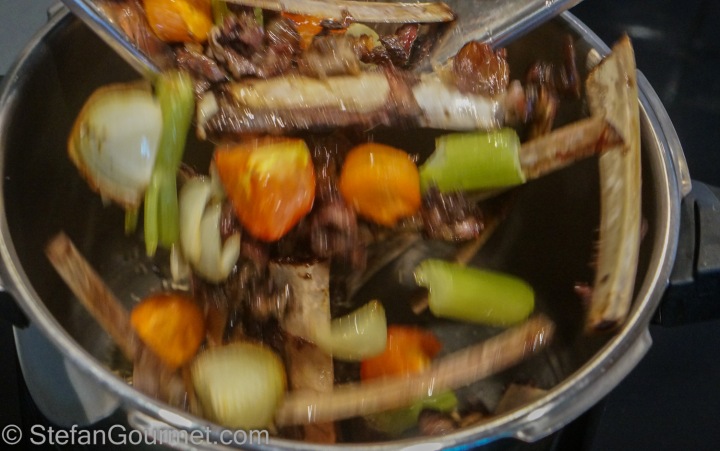 Transfer the contents of the oven dish to a pressure cooker or regular stock pot.

Add this water to the pressure cooker or stock pot. 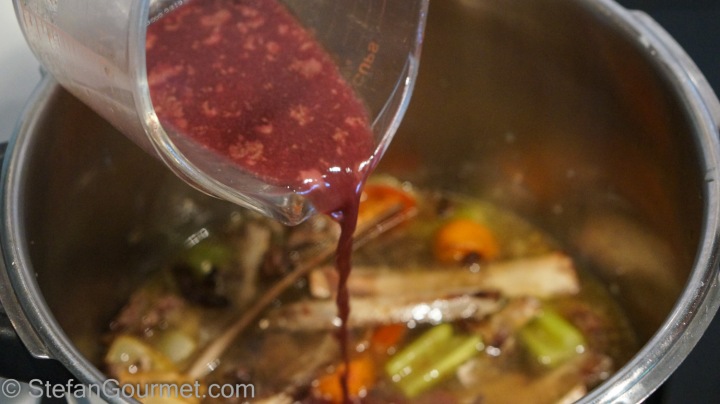 Add the reserved juices from cooking the roulade sous-vide.

Pressure cook for 2 hours, or bring to a boil, lower the heat, and simmer for 4 hours.

At the end of the cooking time, turn off the heat and add fresh rosemary and allow to steep while the stock cools.

Filter the stock and allow to cool completely. A layer of fat will form on top, which you can easily remove with a spoon if the stock has cooled to refrigerator temperatures. The other ingredients you will need to finish the sauce are more fresh rosemary, a chopped shallot, a chopped garlic clove, a bay leaf, and red wine (125 ml or 1/2 cup of red wine for each 500 ml or 2 cups of stock).

Heat a tablespoon of the fat that you took from the stock and sauté the shallot, bay leaf, garlic, and rosemary until the shallot is golden (about 10 minutes).

Deglaze with the red wine and allow the alcohol to evaporate.

Bring to a boil, lower the heat, and allow to simmer until reduced by half.

Filter out the solids and reserve the sauce base.

Since double-shelling the fava beans is a lot of work, I used only about 500 grams (1.1 lbs) for 4 servings.

The pods can be opened very simply with your fingers. Take out the large beans that you will find inside and discard the pods. 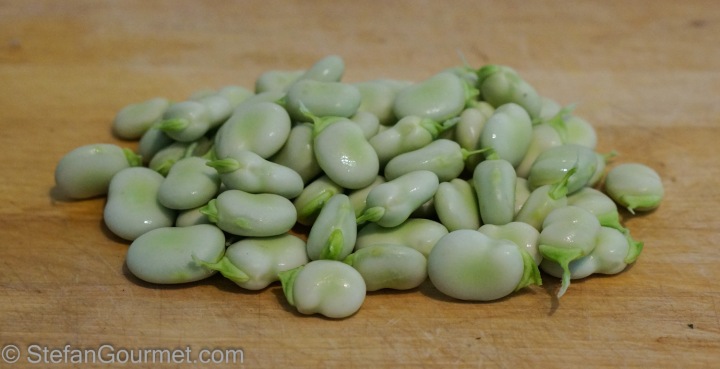 This is not just a gratuitous bean shot, but also to show you what is left of the pile of pods.

Now comes the second shelling, which is easiest when using your fingernails. Try to remove the white-colored outside layer without damaging the tender green bean inside.

This is what I ended up with after 20 minutes of hard work: 68 grams (2.4 oz) of double-shelled fava beans. 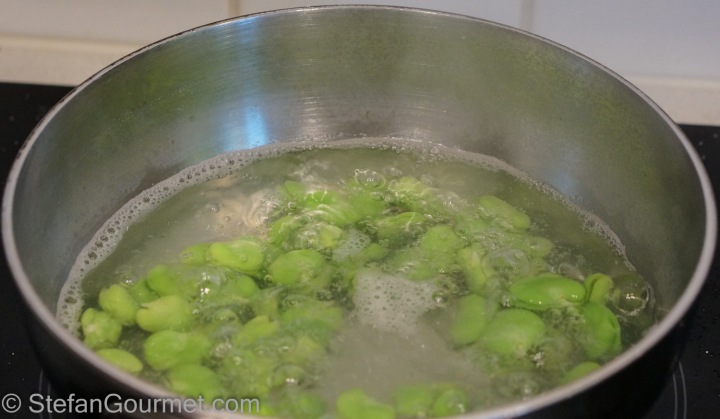 Cook the fava beans for 5 minutes in salted water to which you have added a pinch of baking powder to keep their green color. 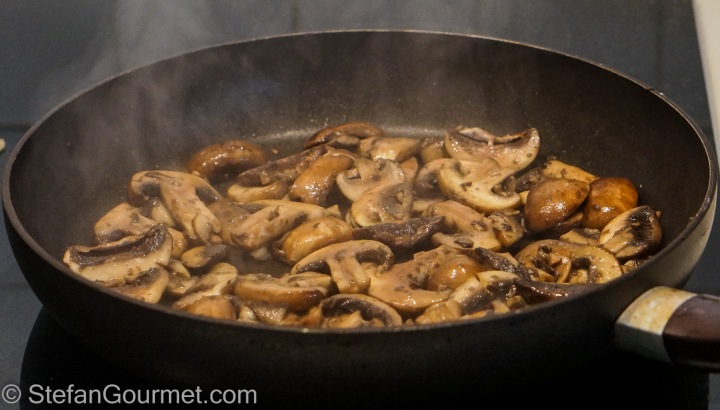 Sauté the cultivated mushrooms in batches in olive oil. 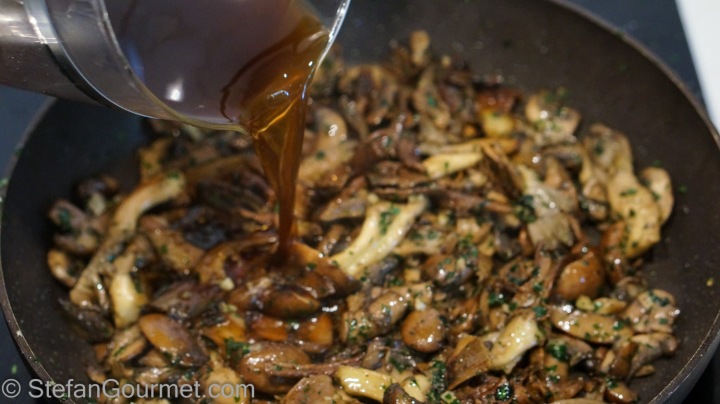 Sauté the porcini mushrooms with minced parsley and minced garlic. Before the garlic starts to color, add the sauteed mushrooms and the porcini soaking liquid.

Bring to a boil, lower the heat, and allow to simmer until most of the liquid has gone. Season with salt and freshly ground black pepper.

Take the venison roulade out of the pouch and pat it dry with paper towels. 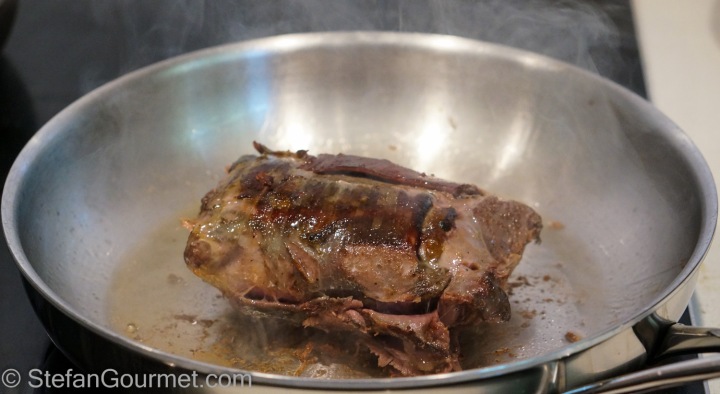 Heat the remaining fat that you took from the stock over high heat. Brown the roulade on all sides over high heat, then wrap it in aluminum foil and allow it to rest while you finish the sauce. 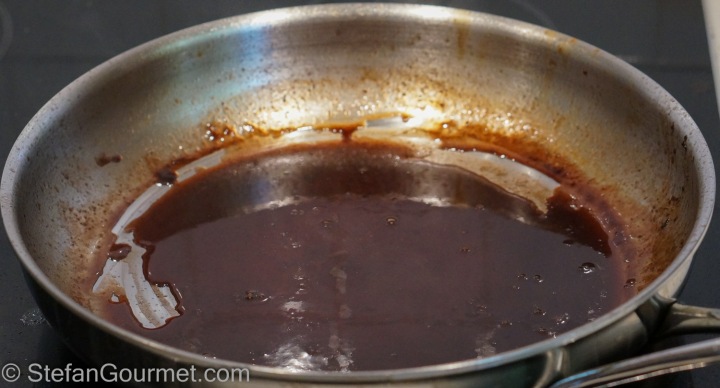 Pour the fat out of the pan and deglaze the pan with the sauce base. Cook over medium-high heat, stirring, until the sauce has thickened.

Slice the roulade and serve it on warm plates with the mushrooms, the fava beans, and the sauce.

This was outstanding with a Barolo, an Elio Grasso Ginestra Casa Maté 2003 to be precise. Because the sauce has a very ‘ripened’ flavor, the Barolo should be mature and from a warm vintage such as 2003.

Spaghetti with tuna is my “go to” recipe for un unplanned but tasty and healthy meal, as all the required ingredients have a very long shelf life (so I usually have them available) and it doesn’t matter to leave out the optional ingredients. The only things you really need are spaghetti, a can of tuna, a can of peeled tomatoes, salt and olive oil. The taste will be more complex if you do use optional ingredients, but it will still taste fine without them or with just a few of them. Another advantage of this dish is that it takes only about 15 minutes to make.