On nice days I often walk from the train station to work, rather than taking a tram or subway. On my way to work I will then walk by the fanciest butcher shop that I know of in Amsterdam (and probably in the whole country): Slagerij De Leeuw. This is not a place to get your daily meat, but for special occasions they have great stuff like organic foie gras, Rubia beef from Spain, and wagyu beef (imported from the US). Wagyu is usually outrageously expensive, but the flank steak (referred to as “bavette”) looked great and almost reasonably priced. The butcher said I should let it come to room temperature, sear it in its own fat (he actually said to also use butter) and let it rest. He said that even though it’s flank steak, it can be eaten like a tender steak since it’s wagyu. I thought I’d also like to try it cooked sous-vide for 24 hours at 56C/133F. And so I decided to try both.

For the seared version, I seasoned the steaks liberally with salt and freshly ground black pepper. I heated a frying pan to very high heat and put the steaks in with the fat side down. As soon as enough fat had rendered, I seared them quickly on all sides. I was aiming for the rare side of medium rare, so I seared just until nicely browned. 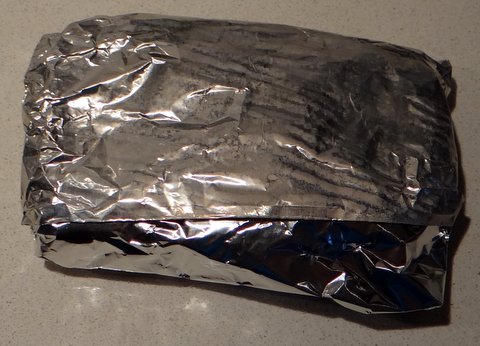 Then I let them rest in foil for about 10 minutes.

I sauteed some spinach in the beef fat. Beef and spinach go very well together. The beef fat takes off the edge off the spinach, and the green spinach is a healthy combination with the red meat. 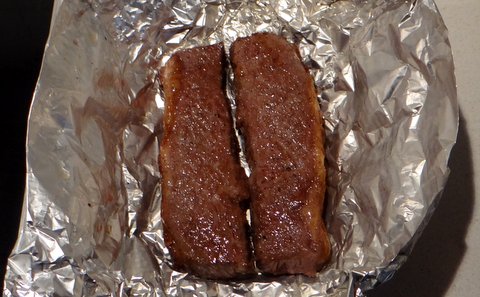 I then took the beef out of the foil.

And served it with some spinach on warm plates. 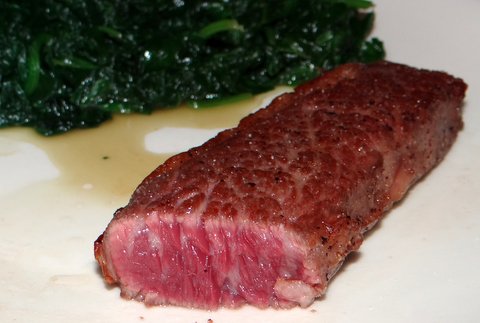 The beef was indeed on the rare side of medium rare, and had great taste. It had to be cut very thinly however (2 mm or 1/12 inch) to be considered tender.

I vacuum sealed another piece of wagyu flank steak, after seasoning with salt and freshly ground black pepper.

I took the beef out of the pouch and patted it dry with a paper towel.

I seared it very briefly in a very hot pan, starting with the fat side to sear the other sides in its own fat.