When you cook meat (beef, lamb, pork, venison, etc.) sous-vide for a long time (8 hours or more) at a temperature below 60C/140F, sometimes the meat comes out with an unpleasant smell. Sometimes just faintly, sometimes very strongly. The bag may even be puffed up a little. I already looked into this problem several years ago, and wrote a post about it. But I did not really solve the problem back then. Luckily, now I seem to have solved it!

It is mentioned in many sources online that this problem is caused by lactobacillus. This is a type of ‘good’ bacteria that are not harmful and they are actually used to make cheese, yogurt, sauerkraut, and sourdough bread. It is known that they can reproduce up to a temperature of 59C/138F, so it is not surprising that they are not killed when meat is cooked at temperatures between 55C/131F and 59C/138F. It is also not surprising that the smell is somewhat reminiscent of stinky cheese (as lactobacillus is what makes the cheese stinky, too). By the way, from a food safety perspective it is safe to eat the badly smelling meat, as lactobacillus is harmless (people even buy expensive types of yogurt to eat the lactobacillus on purpose). You may not just enjoy it as much.

What is also mentioned in many sources is that lactobacillus can be killed, and the funky smell prevented, by searing the meat before vacuum sealing. This seems to make sense, because searing will kill any lactobacillus that are present on the surface of the meat. However, I tried this and it didn’t work. In fact, over the seven years I have been cooking sous-vide, I have had several occasions where pre-seared meat still ended up with the bad smell. So how is that possible?

Once I had realized this, I had a theory of what would work: vacuum seal the meat first, and then scald it in boiling water for about 20 seconds. The scalding will kill any lactobacillus that was on the meat when it was vacuum sealed, and because of the vacuum seal there is no way that new lactobacillus could get in again. I put this theory to the test, and it works! After repeating the results with another type of meat, I am now confident enough to present this solution to the world.

For the first experiment I started with a piece of lamb shoulder. 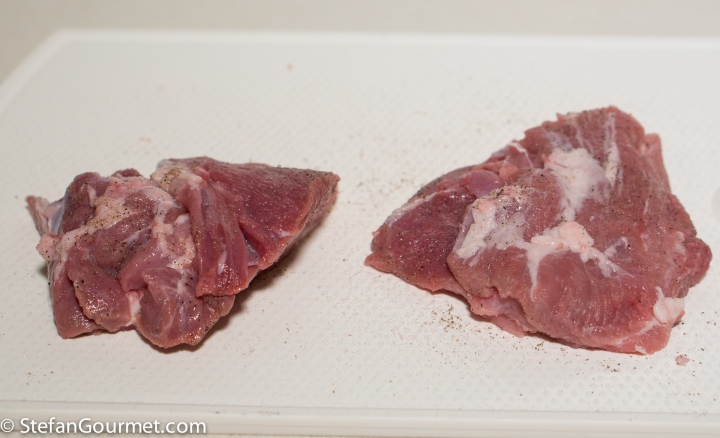 I cut this into two pieces and seasoned with salt and pepper.

Then I vacuum sealed both pieces separately. One of the bags I marked “SCALD” and I scalded it for 20 seconds in boiling water. This brief scalding will affect only the surface of the meat.

As you can see the two pieces of lamb shoulder now looked very different. 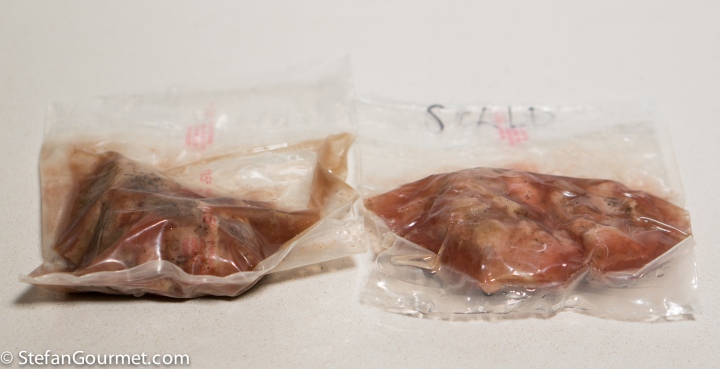 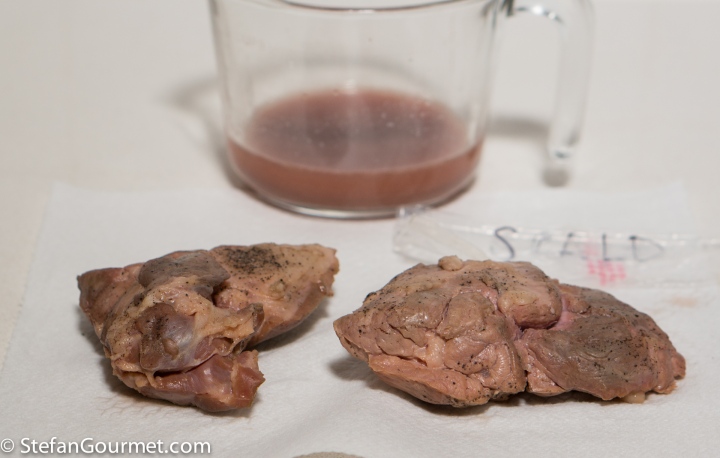 …especially after taking them out of the bag. The scalded piece smelled of lamb, the un-scalded piece had a bad smell and was discarded.

After this I proceeded as usual with the scalded piece of lamb and seared it in a frying pan over high heat.

I repeated the experiment with a chuck steak, cooked 72 hours at 55C/131F. Again the scalded beef was perfect, whereas the un-scalded beef came out with a bad smell.

So from now on, I will always scald in boiling water for 20 seconds after vacuum sealing when I’m cooking meat below 60C/140F for 8 hours or longer. (I have never had a problem with short cooks, probably because the time is too short for lactobacillus to grow significantly.) You can sear the meat before vacuum sealing it, and then you still need to scald it anyway.

It is important that the surface of the meat is touching the bag everywhere so that the scalding can kill all lactobacillus. In other words, if vacuum sealing multiple pieces in one bag then make sure they are not touching each other.

Instead of boiling water, you can also use water that has been heated to 77C/170F, as that is also hot enough to kill bacteria instantly. However, I find it easy to use boiling water, because I can tell it’s boiling by looking instead of using a thermometer.