Iberico is a breed of pork from Spain that is known for the cured ham, jamón iberico. Like wagyu cattle, Iberico pigs have more intramuscular fat (marbling) than regular pigs. Now of course there is more meat on a pig than just the ham, and the other cuts are reasonably priced compared to regular pork. The best quality pork is obtained from iberico pigs that get a diet of acorns that they gather themselves in the forest.

The cross section in the photo clearly shows the marbling. As you know fat equal flavor, so these are very flavorful indeed.

Spare ribs are usually treated with a lot of spices and smoke to give them flavor, but iberico pork has so much flavor by itself that I decided to use just salt and pepper and let the flavor of the pork shine. Spare ribs are often boiled before grilling, resulting in meat that falls of the bone and is more like stewed meat. Instead, I cooked the iberico spare ribs sous-vide for 24 hours at 57C/135F to serve them very tender and juicy. You could give regular pork ribs the same treatment, and it will still turn out pretty good. But with iberico pork it is phenomenal. 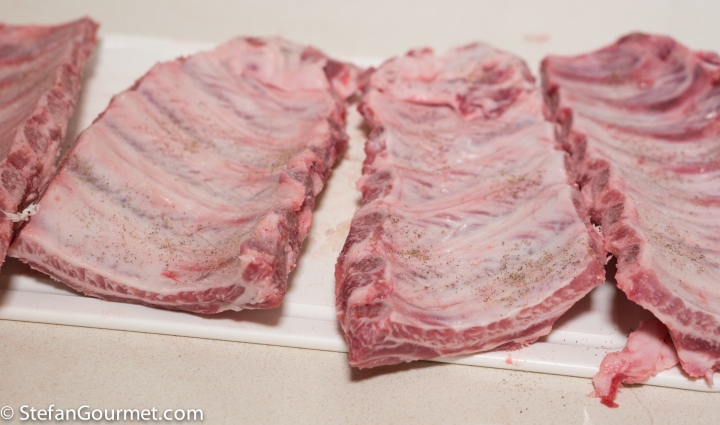 Cut the slabs of ribs into manageable sections. Season them on both sides with salt and freshly ground black pepper.

Scald the ribs in hot water (at least 77C/170F — I used boiling water so I don’t need a thermometer) for 10 to 20 seconds. Because of the long cooking below 60C/140F, there is a risk that lactobacillus will cause an unpleasant smell. This procedure prevents that.

Allow them to cool a bit before grilling them. As the ribs are quite thin, you could even cool them completely and refrigerate them, and then finish them on the grill days later. (The vacuum sealed cooked ribs will keep a long time in the refrigerator and you could also freeze them.)

Finish the ribs over hot charcoal, turning often. No sauces needed as the ribs are so good on their own. 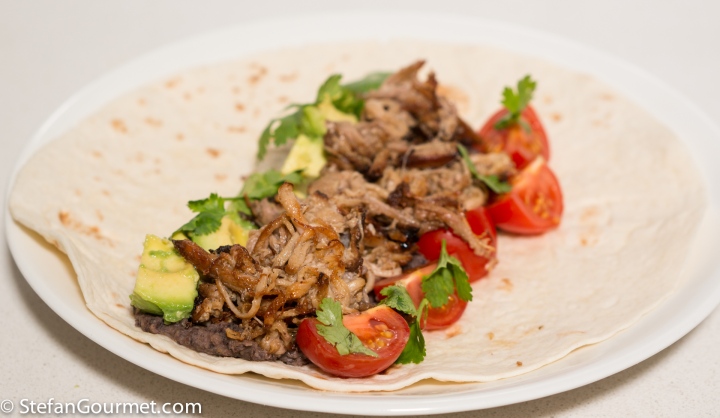 Carnitas is a Mexican recipe to prepare pork: slow cooked in lots of lard. This will make the pork tender and juicy on the inside, with some crisp edges on the outside. With sous-vide and a broiler you can get a similar result that is very tasty and does not require a bucket of lard. Although carnitas are traditionally made using pork shoulder, I used pork belly instead to make up for not using lard.