After trying beef short ribs teriyaki sous-vide, I decided to try rib-eye steak teriyaki sous-vide. The main difference between short ribs sous-vide and (rib-eye) steak sous-vide is that short ribs need 48 hours at 57C/135F to get tender, but steak is already tender and only needs to be brought to temperature. The teriyaki short ribs were a bit dry because the marinade had drawn out too much of the juices. For the rib-eye steak I decided not to marinade the steak before cooking, but only to marinade during cooking. This turned out well: the steak had a nice teriyaki flavor and was still juicy. Since I like to serve the steak medium rare, I’m only cooking it to 50C/122F before searing and glazing it with the teriyaki marinade. Please note that this does not pasteurize the meat, which should be fine if the meat is fresh. I like to use rib-eye steak because for a tender steak it has quite more intramuscular fat and thus more flavor.

Start by making the teriyaki marinade. I always make it from scratch, but you could substitute with store-bought teriyaki. In a small saucepan, combine the soy sauce, mirin, sake and sugar. Heat over low heat, stirring, until the sugar has dissolved.

Put the beef and the teriyaki marinade in a ziploc sous-vide pouch. Seal it with as little air as possible using the water displacement method (i.e. submerge the bag while pushing out the air and seal the ziploc just before it goes under water). Cook sous-vide for 1 hour at 50C/122F.

Just like with the short ribs cooked at 57C/135F, the teriyaki marinade and the beef juices that are released during cooking make a nice base for a sauce that, unlike other sous-vide meat juice, does not curdle!

Take the steak out of the pouch and reserve the marinade. 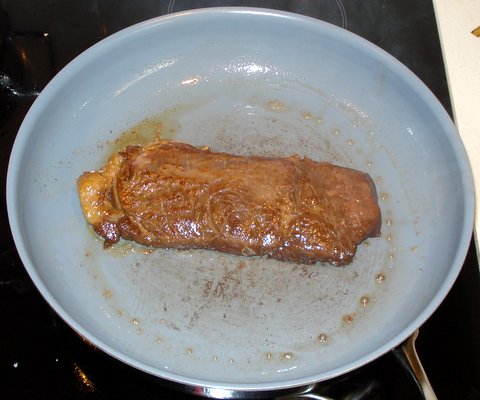 Sear the steak briefly in butter and take out of the pan.

Add the marinade from the pouch and cook over medium heat until you obtain a wonderful beefy teriyaki glaze.

Briefly return the steak to the pan to cover it with a teriyaki glaze on all sides.

It is now ready to serve. I served it on preheated plates with stir-fried pak soy and rice.