Cordon Bleu was one of my favorite dishes as a kid. I hadn’t eaten it for years, but when I was thinking about what to do with the organic chicken breast I had left from the whole chicken I had used to make brodo for tortellini, I decided it would be nice to make cordon bleu again. It can’t be a surprise that cordon bleu is really good if made from scratch with good chicken, good ham, and good cheese. It is quite different from something store-bought where the ham, cheese, and chicken are probably all of the ‘processed’ variety.

Cordon Bleu is a Swiss dish, according to legend invented by a ship’s chef in 1933 to celebrate the fastest crossing of the Atlantic. The captain of the ship “Bremen” had just received a “cordon bleu” (French for “blue ribbon”) for this achievement. The famous cooking school “Cordon Bleu” also refers to a blue ribbon, worn by knights of the highest distinction.

Cordon Bleu can be made with veal, chicken, pork, or even turkey. I liked it a lot and will definitely be making this more often.

2 slices of good cheese that melts well, such as gruyère, comté

Cut a ‘pocket’ into each chicken breast with a sharp knife.

Make the pocket as deep as possible without puncturing the meat.

Put ham in the pockets. 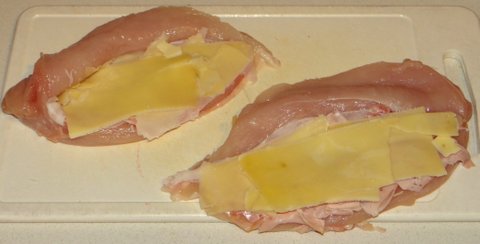 Put cheese in the pockets as well.

You could wrap the ham around the cheese to prevent the cheese from leaking, but I didn’t bother. 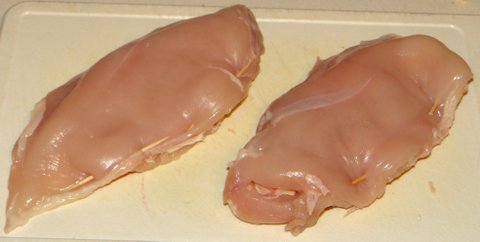 Season with salt and freshly ground white pepper on both sides.

Beat the egg and put it on a plate. Spread out a layer of bread crumbs on another plate. Coat each cordon bleu first in beaten egg and then in breadcrumbs, pressing down on the breadcrumbs to help them stick.

Let the cordon bleus dry for about 10 minutes, turning them halfway.

Pan-fry in clarified butter or oil in a non-stick frying pan. 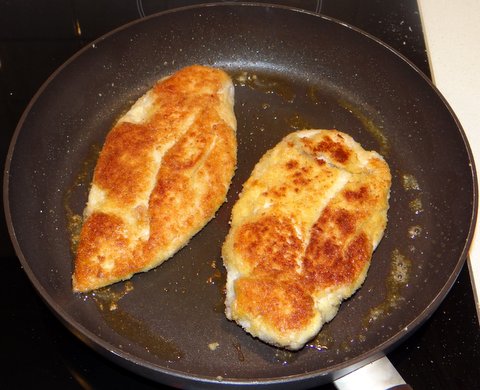 Fry about 4 minutes per side (depending on the thickness), or until golden and just cooked through.

Serve at once on warm plates.