I always thought it was impossible to prepare a perfect duck breast. Duck breast consists of two parts: the skin and the meat. To be perfect, the skin should be crispy with most of the fat rendered out of it, and the meat should be medium rare. Both at the same time seemed to be impossible, as the meat overcooks while you are rendering the fat from the skin. Even experimenting didn’t help to solve this conundrum. 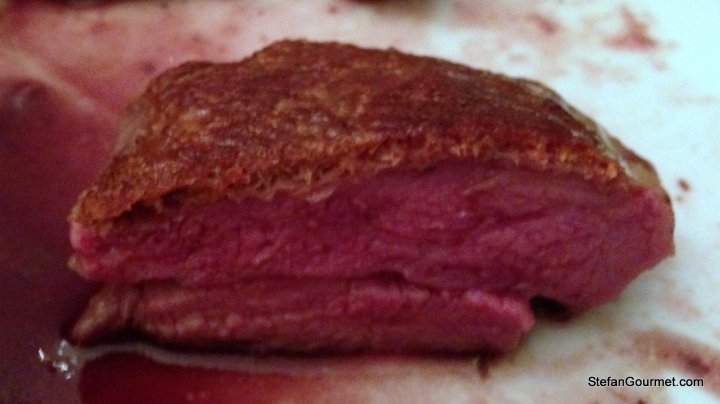 But then I thought of Transglutaminase, an enzyme that is sold mixed with maltodextrin and sodium caseinate under the name of Activa RM and is also known as ‘meat glue’. Why not take the skin off the meat, cook skin and meat separately, and then glue them back together again? Teun had some Activa and so I went over to his place to try this. And guess what? It worked! Crispy skin and meat that was uniformly medium rare all the way up to the skin. (Unfortunately I only took photos with my iPhone in bad lighting conditions. I will prepare duck breast this way again and then take good photos and post a proper recipe.)

Taking off the skin is not so hard with the help of a sharp knife.

We cooked the skin in the oven between silicon mats.

We put a lasagna dish with something heavy on top of the skin while it was cooking in the oven to keep it flat.

We cooked it for 45 minutes at 200C/390F. The resulting skin was very crispy and had a nicely browned flavor. Next time I will try a lower temperature and a longer time to get the same crispness but less of the browned flavor as it was a bit strong.

Using Activa RM is very easy: just make a slurry by mixing it with cold water in a 1 to 4 ratio (1 part Activa to 4 parts water) and use this slurry as ‘glue’.

The sodium caseinate in the Activa RM helps to glue together parts that are difficult to glue, like cooked meat and skin as in this case. The only problem is that the skin shrinks a lot when cooked, in fact it ended up being less than half of the original size. This is why you see that the skin does not fit on the meat very well. 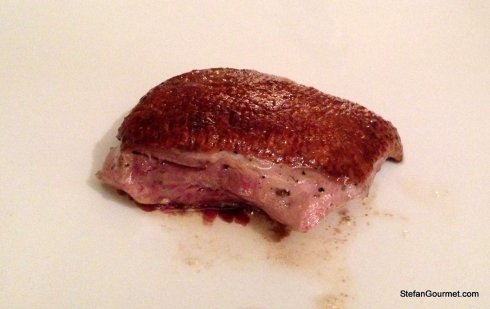 We found a good solution for that though: cook the skin first. Trim the meat to fit the skin, and then glue the trimmings to the bottom of the meat. The resulting duck breast looks very ‘natural’ so this is how we will do it next time. 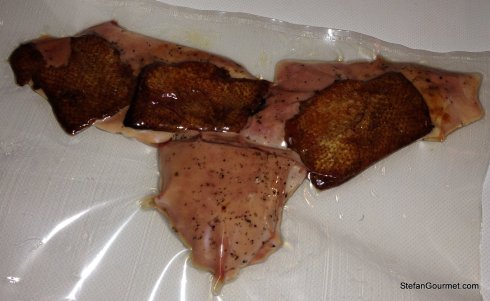 The Activa will need 4 hours in the refrigerator or just 5 minutes at 55C/131F to set. The parts you are trying to glue together should be pressed together tightly, so vacuum sealing is best. And if it is vacuum sealed and you have a sous-vide cooker, then cooking it at 55C/131F is very easy to do.

We were not sure whether it would work to glue the skin to cooked meat, so we tried to glue it to cooked as well as raw meat. Both worked equally well. In both cases as a final step the meat is seared in the duck fat rendered from the skin over high heat to brown the meat and crisp up the skin because the skin becomes slightly soggy when cooked sous-vide.

Teun came up with a port sauce with dried cherries, and sides of mashed potatoes and bok choy with garlic and soy sauce. This made for a very nice meal. I paired it with a Salice Salentino Riserva from Puglia in the far south of Italy, which was a good pairing as this wine has a hint of cherries and the duck can easily stand up to such a full-bodied wine.

Click here to read more about Transglutaminase. There will be more posts using this very useful enzyme! I’m not a big fan of gimmicks on my plate, but in this case you can only tell in the finished dish that something special is going on because of the rare combination of crispy skin with medium rare meat. Otherwise it looks and tastes perfectly natural, and that’s how I like it.