I’ve never been to India and I’ve never even eaten at an Indian restaurant. But I was curious about the cuisine, and so it was a great pleasure that two natives, Vinod and Seema, were willing to cook for me and show me how Indians cook at home. Of course India is a large country with many regional differences, and every household prepares the dishes a bit differently and some spices will be different. Vinod and Seema prepared four different dishes while I was watching, taking photos, and asking questions, and all of them were delicious. In this post I will share what I’ve learned to my best ability. Although I am not familiar with all the ingredients and spices, luckily the cooking technique did make sense. 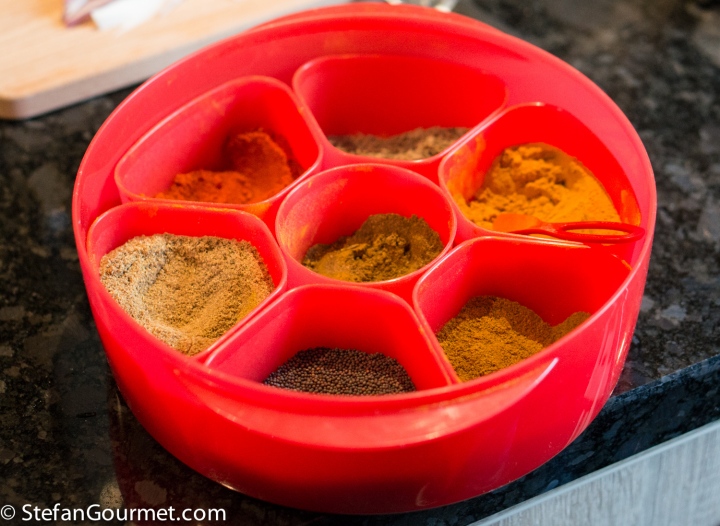 Spices are an integral part of Indian cuisine. These are the spices they use the most: chilli powder, ground coriander, mustard seed, ground cumin, turmeric, cumin seed, and garam masala. The latter is a mix of ground spices: black and white peppercorns, cloves, cinnamon or cassia bark, nutmeg, mace, black and green cardamom pods, bay leaf, and cumin.

The first dish was dal, lentils. First the yellow lentils were pressure cooked with asfoetida, which is added as a digestive aid, fresh green chillis, ground turmeric, and salt.

While the lentils are cooking, the ingredients to add to the lentils later on were prepared: tomato, curry leaves, dried red chillis, cilantro, shallot, and garlic.

When the lentils were done…

…the tomato was added.

The shallots, garlic, chilli peppers, curry leaves, were sautéed in some oil together with cumin seed and mustard seed.

This mixture was added to the lentils, together with some water.

Finally, some lime juice was added…

The second dish was paneer, Indian fresh cheese, with spinach. First the spinach was cooked with only a bit of water until just starting to wilt…

…and then chilled in ice water to stop the cooking and keep the color. 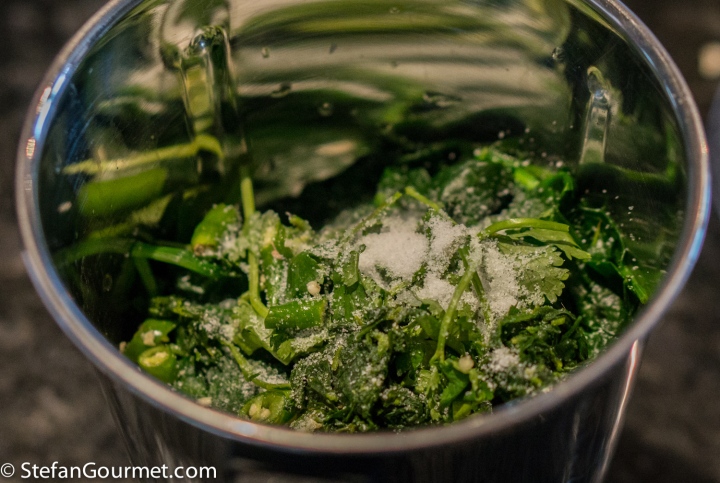 The spinach was then put in a blender with salt, fresh green chilli, fresh cilantro, and fenugreek leaves (which were frozen, as they are difficult to obtain fresh in the Netherlands). This was then blended to a puree.

[To get fresh fenugreek leaves, you can plant some dried fenugreek seeds and grown your own. According to Vinod it takes only 2-3 weeks for them to grow to 15 cm (6 inches), which should be good enough to use.] 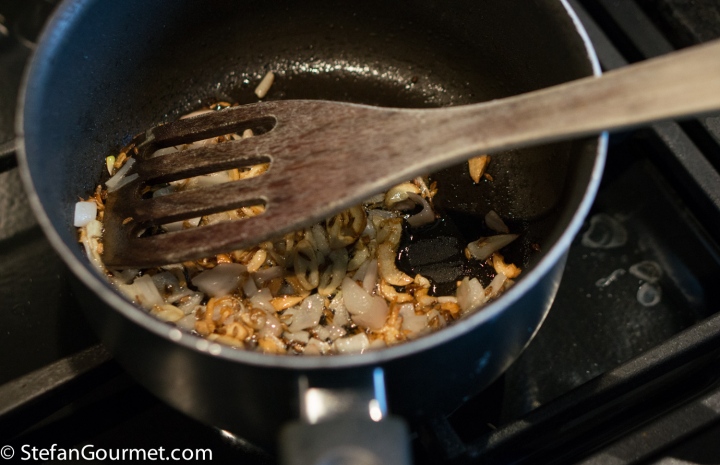 Cumin seed, garlic, and shallot were sautéed in a bit of oil.

Then ground turmeric and ground coriander were added.

The spinach puree was added to this, together with some yogurt and water. 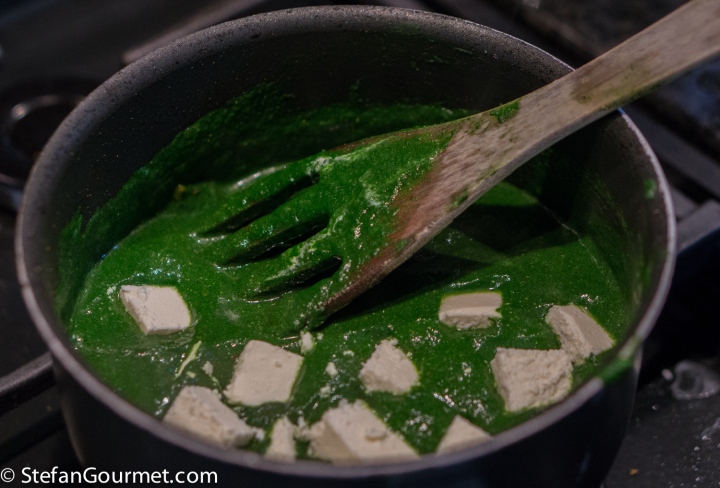 Then the paneer was cut into pieces and added together with some lime juice.

The pot was covered for a couple of minutes to allow the paneer to heat through over low heat.

Then the Palak Paneer was served in a bowl…

…and garnished with yogurt and cream. 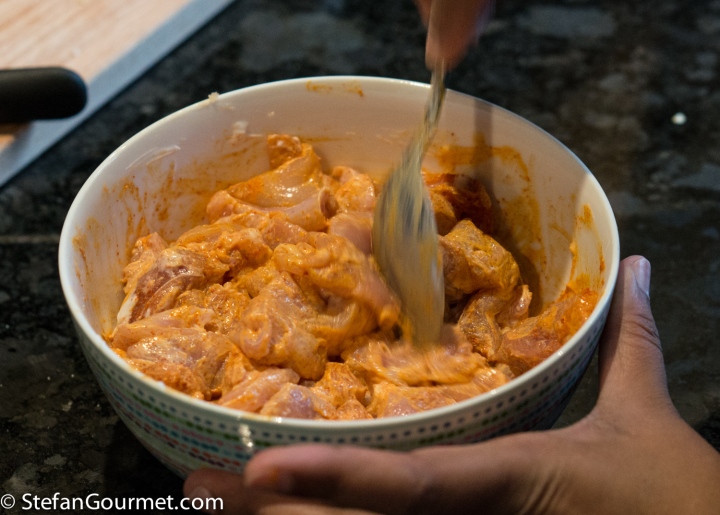 Vinod and Seema know what they are doing, because they used chicken thigh instead of chicken breast meat. The chicken was marinated in yogurt, salt, chilli powder, and turmeric.

First the oil was flavored by cooking some spices in it for a couple of minutes: bay leaf, cloves, cardamom pods, star anise, and cinnamon bark. 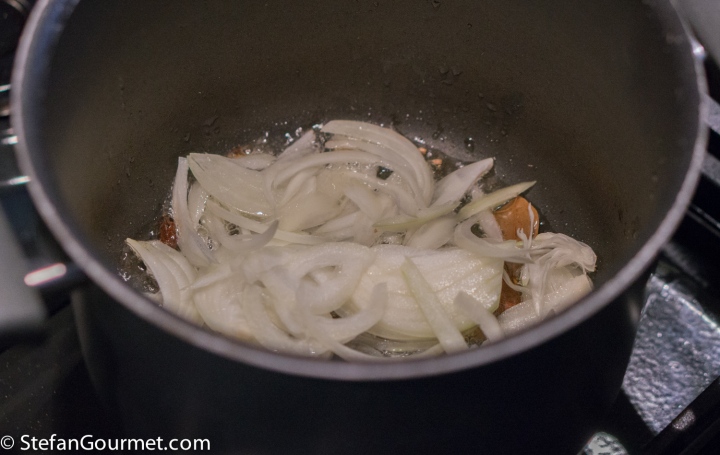 Next, onion was added and sautéed.

Then the spices were removed, and subsequently ground coriander, ground cumin, chilli powder, and garam masala were added. As well as some tomato paste, and a paste of ginger and garlic.

Then the chicken was added, together with fresh tomato and some salt. The chicken was cooked for a few minutes in the masala until it started to release some juices. 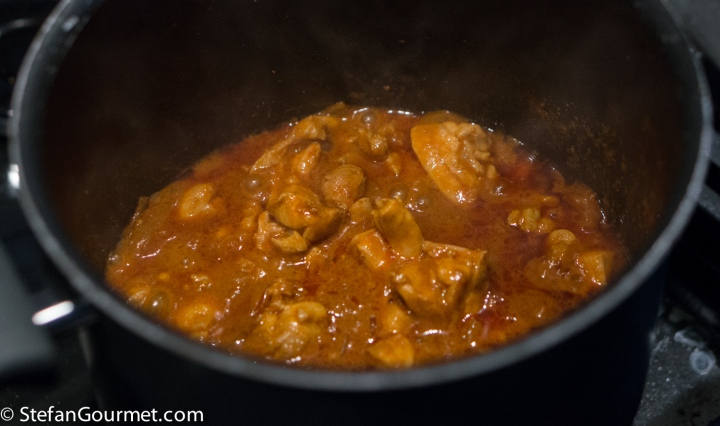 When the chicken started to release juices, water was added.

To thicken the curry, first some cashew nuts were pounded in a mortar with a pestle.

Then some yogurt was added as well. Cashews and yogurt do not only thicken the curry, but also mellow it down a bit.

Then we went outside for a technique to smoke the dish that I had not seen before. Vinod built a small fire with some charcoal.

When the charcoal was covered by white ash, he took a piece of charcoal back to the kitchen and put it on top of the curry on a small aluminum dish, and put a bit of butter with some saffron threads on top. The butter started smoking a lot. The pot was covered to smoke the dish while the chicken finished to cook.

Finally, the charcoal was removed and the curry was garnished with fresh cilantro.

For the shrimp curry, some green chilli, garlic, mustard seed, and curry leaves were sautéed in some oil.

Then a chopped onion was added. 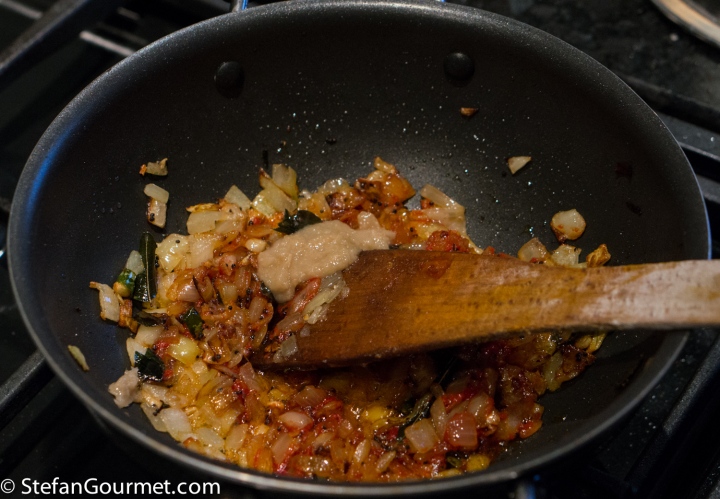 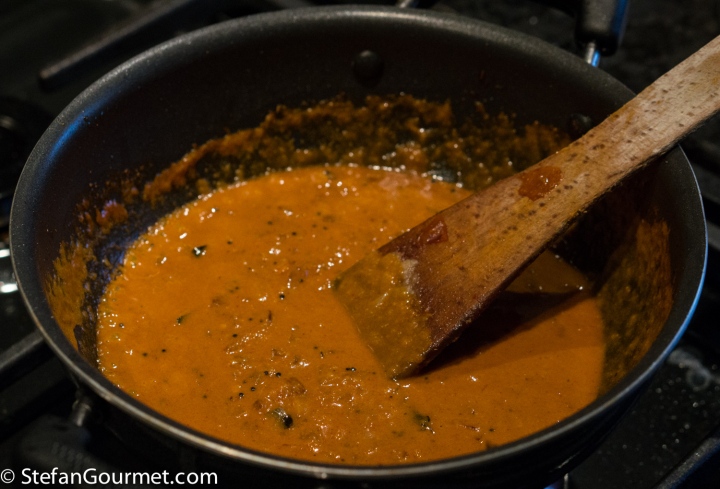 Then water, coconut milk, and tamarind paste were added. 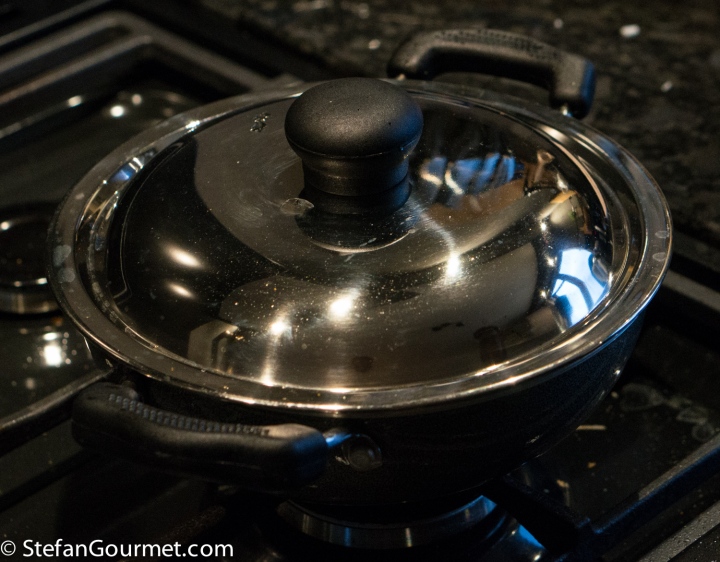 Vinod mentioned that he wanted to keep the shrimp moist. I suggested to add the raw shrimp to the hot curry and turn off the heat and cook the shrimp that way.

And so we did, covered for a couple of minutes until the shrimp was just cooked through but still juicy.

Finally some fresh cilantro and lime juice were added. 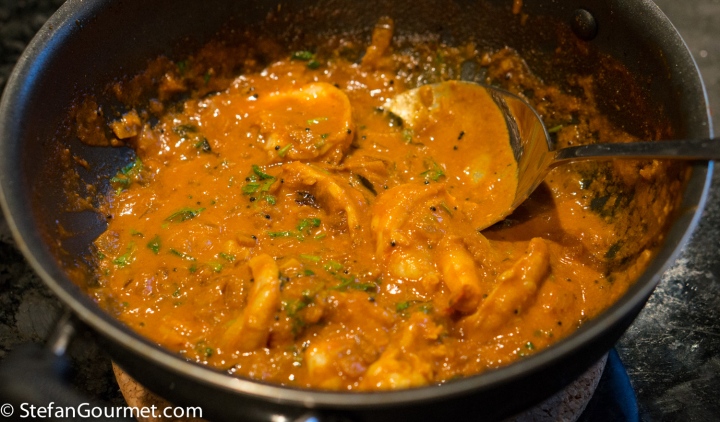 And the shrimp curry was ready.

This has been a wonderful experience and I will be sure to try cooking some Indian dishes on my own.

Saucijzenbroodjes (sausage rolls) are a very popular snack in the Netherlands. I don’t like the regular version very much and prefer my own ‘Italian’ version.

25 thoughts on “Introduction to Indian Cuisine”