Picanha is a cut of beef that is very popular in Brazil and Argentina, that is known as “rump cap” in the United States or as staartstuk in the Netherlands. It is a tender and flavorful piece of beef from the rear of the animal with a fat cap on top. In South America it is often served with chimichurri sauce, a green sauce with parsley, olive oil, and vinegar as its main ingredients.

When I saw this beautifully marbled and dry aged piece of picanha from Simmentaler beef, I couldn’t resist procuring it. It goes without saying that I cooked it sous-vide to get it perfectly medium rare from edge to edge. The beef was phenomenal and the sauce lightens it up, perfect for the summery weather we are having at the moment. Here’s what I did…

Trim most of the fat cap away, as the sous-vide cooking won’t render the fat. Leave a thin layer of fat on for flavor, and reserve the remaining fat for another use.

Score the fat layer in a criss cross pattern.

Season the picanha on all sides with salt. 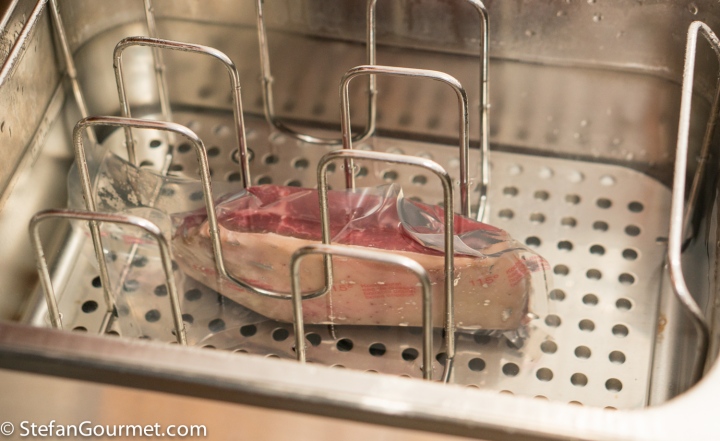 Vacuum seal it and cook sous-vide for 2 hours at 55C/131F. Since this is a tender piece of meat, you only need to cook it until the core of the meat reaches 55C/131F.

While the picanha is in the sous-vide, combine the ingredients for the chimichurri in a small bowl…

…and stir to mix. That’s it, your chimichurri sauce is done. You may wish to taste it and adjust it to your liking. 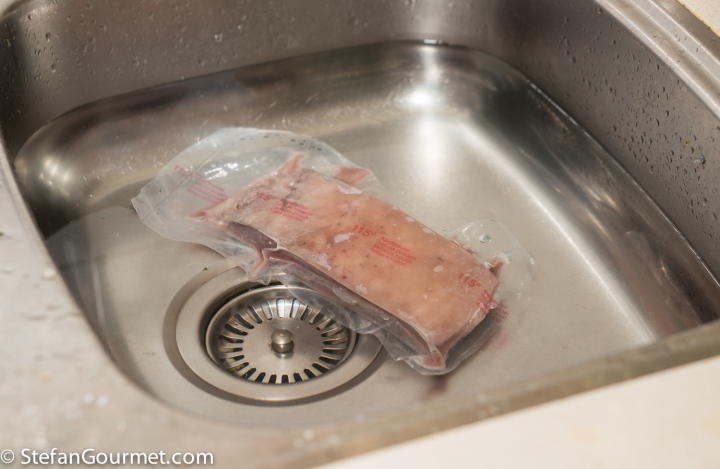 When the picanha has finished cooking sous-vide, plunge the sous-vide bag with the meat in cold water for about 5 minutes so the outside will cool off a little. This is to prevent overcooking the meat while searing it.

You have three options for searing the meat:

While the meat is cooling off, preheat a frying pan or the broiler (or start a bit earlier if you want to use a charcoal grill). The charcoal grill will provide the best flavor, but it is a lot of work to start a charcoal fire if you are only going to use it to sear the one piece of picanha.

After the meat has cooled off for 5 minutes, take it out of the sous-vide bag and pat dry with paper towels. Dry meat will make for a better sear. 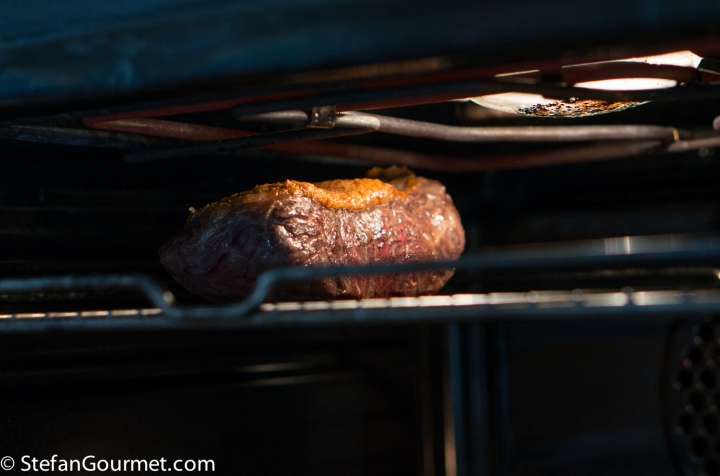 When using a pan, there is no need to add any oil or butter. Simply start with the fat side, and the fat will render from it. Make sure the frying pan is very very hot before you begin and press the meat down.

Briefly sear the other sides as well in the fat that has rendered.

The searing is done when the fat cap is nicely browned. 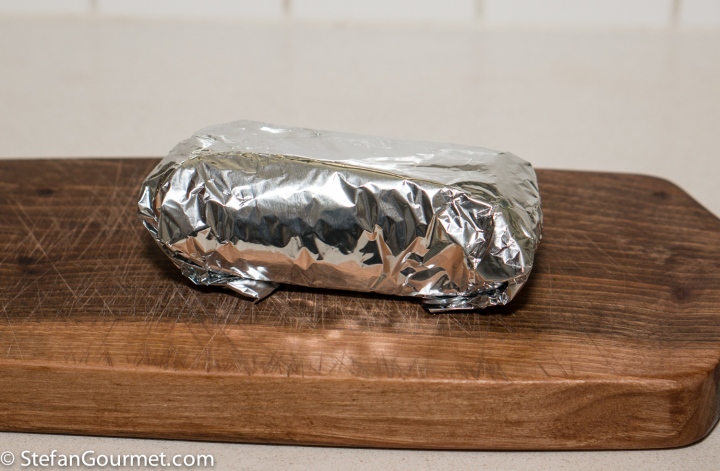 After searing, wrap the meat in aluminum foil and allow it to rest for about 10 minutes.

Slice the meat across the grain.

Serve with the chimichurri sauce and a salad.

Although a Malbec from Mendoza in Argentina would be a ‘local’ wine pairing, I prefer this with a medium-bodied Chianti because of the chimichurri. The acidity of the Chianti can handle the red wine vinegar in the chimichurri a lot better than most Malbecs.

Mackerel is a cheap and tasty fish, and healthy because it’s loaded with omega-3 fatty acids. A simple and tasty way to prepare it, is to roast mackerel in the oven with vegetables.

26 thoughts on “Picanha Sous-Vide with Chimichurri”