Bouillabaisse is a classic fish soup from Marseille in France. The name comes from boiling (bouilla) over low (baisse) heat. Originally it was made from fish that fishermen had left over. Now there are so many versions that a group of restaurants in Marseille has published a charter to define what bouillabaisse should be. According to this charter, bouillabaisse should contain at least four of the following species of Mediterranean fish:

According to the charter, the cheaper and smaller fish are used to make a fish soup. Then potatoes and pieces of ‘nice’ fish are cooked in the soup. The fish can be served separately or in the soup, and is accompanied by garlic croutons and rouille. The latter is a spicy mayo.

Here is my version. Unfortunately, most of the ‘official’ types of fish are not available around here and so I used only two: gurnard for the soup and monkfish for the ‘nice fish’. You can use any type of white fish that you like to make your local take on bouillabaisse. In the traditional version, the ‘nice’ fish is boiled in the soup over low heat. To keep the fish more moist, I turn off the heat and cook the fish in the residual heat.

a small handful of fresh parsley

Heat 4 Tbsp of olive oil in a casserole. Add a chopped onion, a minced garlic clove, and 60 ml (1/4 cup) of sieved tomatoes (or, if good ripe tomatoes are available, a chopped tomato). Using sieved tomatoes will provide more flavor and color than fresh tomatoes, unless you have very good tomatoes available to you. Stir for a minute. Do not allow the garlic to turn brown. 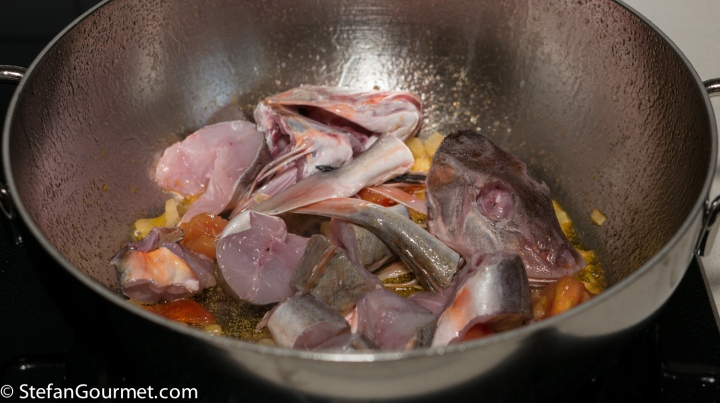 Add 1 kilo of gutted and sliced fish, of which the eyes and gills have been removed. (Eyes and gills would give the soup a bitter flavor.)

Cook this over medium heat, stirring with wooden spatulas, until the fish has been reduced to a paste-like substance.

Add a small handful of parsley and a chopped fennel bulb.

Bring to a boil, then reduce the heat to a gentle boil.

Cook, covered, stirring now and then, for an hour.

After that hour, run the contents of the casserole through a food mill with a coarse sieve. This is hard work!

There will still be some liquid in the pulp that will be left in the foodmill. You can squeeze it out using a conical sieve and a pestle.

Taste the soup and adjust the seasoning with salt and freshly ground black pepper.

Bring the soup to a boil and add 800 grams of potatoes, cut into thick slices. Cook until the potatoes are almost tender, about 15-20 minutes.

Meanwhile, cut the nice fish into large pieces and season with salt.

When the potatoes are almost tender, turn off the heat and add the pieces of fish.

Cover the pan for 10 minutes to allow the fish to cook in the residual heat of the soup.

In the meantime, rub slices of bread with olive oil…

…and broil or toast them until golden.

Cut a garlic clove in half lengthwise and rub the bread with the cut side. 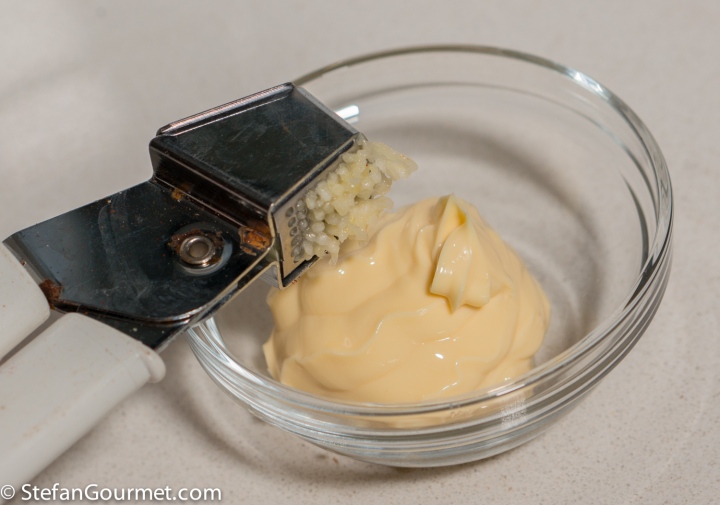 To make the rouille, add a crushed garlic clove to the mayonnaise.

Season to taste with chilli powder and powdered saffron.

Stir to mix. If you do not have powdered saffron, you could also soak some saffron threads in a minimal amount of hot water and add both the water and the threads.

When the fish is almost cooked through after about 8 minutes, add a generous pinch of saffron threads, stir, cover, and allow the fish to finish cooking for another 2 minutes.

Serve the soup with the fish in it or on the side, with the garlic-bread and the rouille.

To serve it hot, take out the fish first, then bring the soup to a boil, and then serve.

The classic wine pairing for bouillabaisse is a rosé from Provence. An alternative is a white from the Provence or the Rhone, such as a Viognier or, even better, a Condrieu (which is the best Viognier in the world from the Condrieu appellation).

Simple Italian dishes can be very tasty, such as this pasta with leeks and pancetta.