Podium onder de Dom is a restaurant in Utrecht (half an hour south-east of Amsterdam) that is located right under the city’s main landmark, the Dom (cathedral) tower. They do not have a Michelin star (yet) — but it seems that they are aiming to get one. Chef Leon Mazairac’s motto is “Simplicity is complex enough as it is”, and that is clear from the dishes in which the main ingredients are allowed to shine. The 7-course degustation menu (75 euros) changes regularly. (They call it 11 courses, but some of the parts are served together and it is not customary the count the amuses bouche and sweets with coffee as courses.) The “Winter Collection ’17” has the song “Oh oh Calypso Blues” as the theme, although apart from the one dish it didn’t become clear to us from the rest of the menu.

The appetizers came in a set of three. This salad of cauliflower, green tomato, yellow beetroot, and horseradish, was excellent. Great combination of flavors and textures, and delicious. 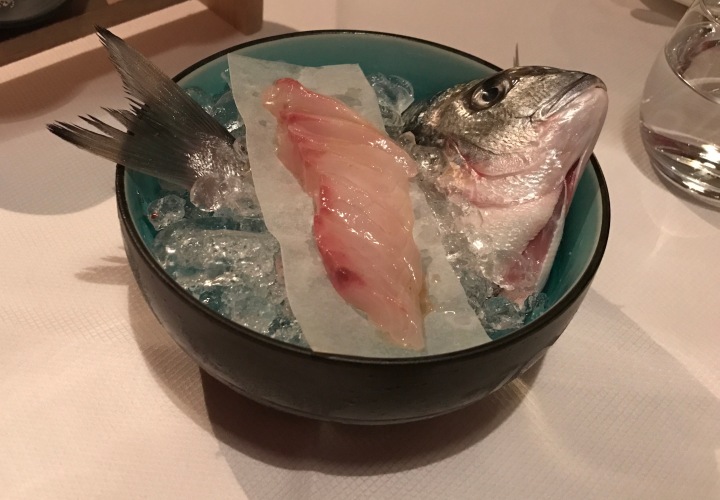 The krupuk with anchovies mayonnaise was good too, although these flavors were very outspoken compared to the other two appetizers. Still a very promising start to the evening, 9/10.

The horse (!) tartare with oyster mayonnaise was very nice, with a delicate oyster flavor. It was served with an unusual wine, made without adding sulfur, from Gard in the South of France that seemed a bit weird at first, but worked very well with the dish. It is a blend of Bourboulenc, Roussanne, and Chasan. (I had never heard of the latter before and had to look it up to find out that it is a cross of Chardonnay and Palomino Fino (the sherry grape)). 8/10

Scampi sauce Ricard. The prawn is very tender and works well with the creamy Ricard sauce (Ricard is an aniseed and herbes de provence-based liqueur from the South of France), which in turn works well with the Chardonnay from Arbois in the Jura. 8/10

The next course is cod with squid, lemon grass, and mango and served with a soundtrack: a reggae-version of the song Oh oh Calypso Blues (with the MP3-player hidden under a bed of seaweed and oyster shells). This was served with an unusual Chenin Blanc from Anjou in the Loire region, with strong hints of mint. This worked very well with the sauce. The cod was perfectly cooked (sous-vide). 9/10 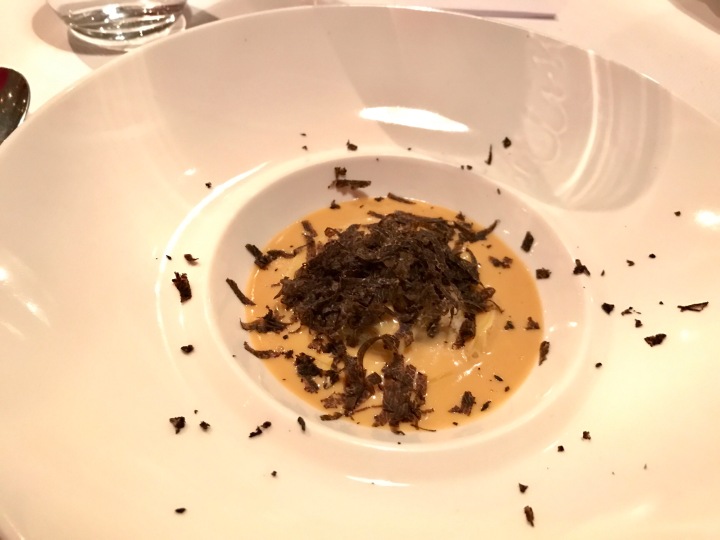 The following dish was the signature dish of the chef, a raviolo (singular) filled with oxtail confit, and a cream of mascarpone and old balsamico. We opted for a bonus of black truffle (12.50 euros extra). This worked well with a nice Pinot Noir from Valle de Uco, Argentina. A very nice dish, and I would not have minded ravioli (plural) instead of the one. 9/10

Thick-cut carpaccio (they called it “tagliata”, but that is seared instead of raw) of a Dutch milking cow with onion in red wine and duck foie gras. This was lacking salt, but luckily there was still some salt on the table (which was served with the bread) and that saved the dish. A lean cut of beef has been used for this (fillet?), which is very tender but lacking in the flavor department. I’ve had nicely marbled milking cow rib eye served in a similar fashion that was amazing. The Cabernet Sauvignon from the Colli Piacentini that was served with this, overpowered the dish and was too astringent with the very unctuous dish. Serving it slightly chilled made it perhaps less overpowering, but all the more astringent. 7/10 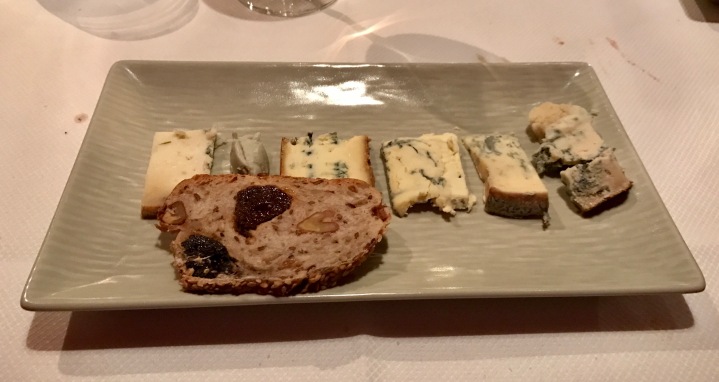 As the portions are very small, we opted to have cheese as an additional course (14 euros). There is a nice cheese cart with a good selection of cheeses, many off the beaten path. After some deliberation we asked for a selection of blue cheeses and a glass of Monbazillac.

Dessert: different textures of earl grey and sencha with hazelnut. The dessert was quite nice, but the Côtes de Gascogne that was served with it was “moelleux” rather than “liquoreux” and not sweet enough for some of the elements of the dessert. 8/10 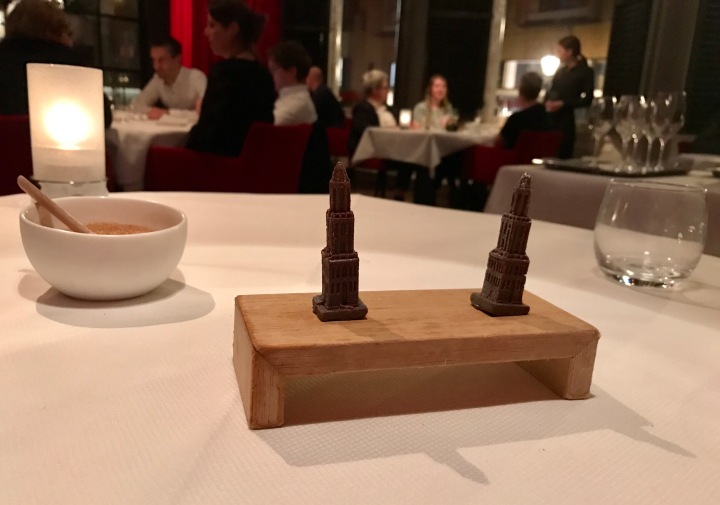 With coffee or tea a “Dom tower” made of butterscotch chocolate was served.

The food is good, with some nice original touches and true to the motto of simplicity. It is delicious and nicely presented, and technically everything is prepared just right. The portions are tiny, you really have to eat a lot of bread or go away hungry. Except for the appetizer salad (which was one of my favorite dishes) there are hardly any vegetables except for decorative purposes (a fennel shaving here, a single leaf of baby lettuce there). Still, as far as the food is concerned I’d say a first Michelin star should be within reach soon. 8/10.

The service needs more work. In the beginning of the evening this was fine with the meal at the right pace and the service very attentive. Later on the time between dishes became too long and the serving staff didn’t even notice when I hardly touched that glass of Cabernet and when they did finally take the almost full glass away, they didn’t even ask anything. They also stopped pouring more wine when our glasses were empty, which they did all the time at the start of the evening. 7/10 for the service.

14 thoughts on “Dining in the Netherlands: Podium onder de Dom”