The restaurant formerly known as Librije’s Zusje in Amsterdam has changed its name and is now called Spectrum. It is still run by chef Sidney Schutte and maître Sascha Speckemeier and still has two Michelin stars. The last time we were there in 2017 it was spectacular and very close to three Michelin stars in my opinion, so we came with high expectations. The restaurant offers a 7-course degustation menu for 180 euros (170 euros for a vegetarian version) with matching wines for 90 euros. Cheese can be added for a supplement. 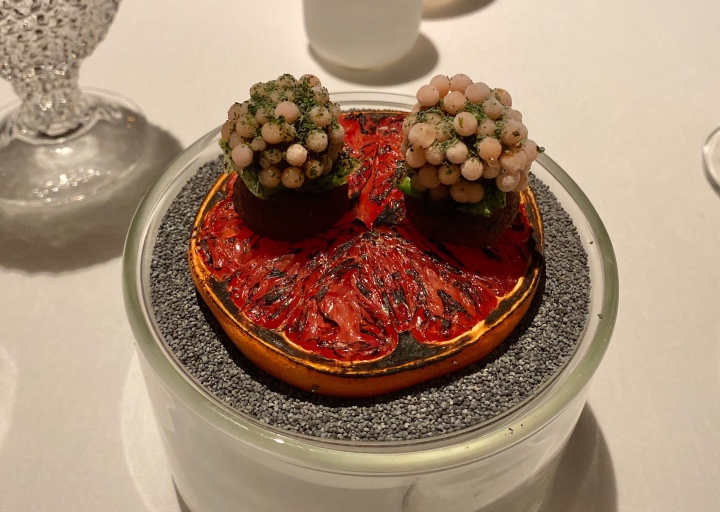 Before the seven courses there are four appetizers. The first one is grapefruit ‘ceviche’ with shiso and avocado.

The next one is amazing: a conch stuffed with a custard of cauliflower and kaffir lime, which is topped with some caviar. The flavor of the custard was superb. 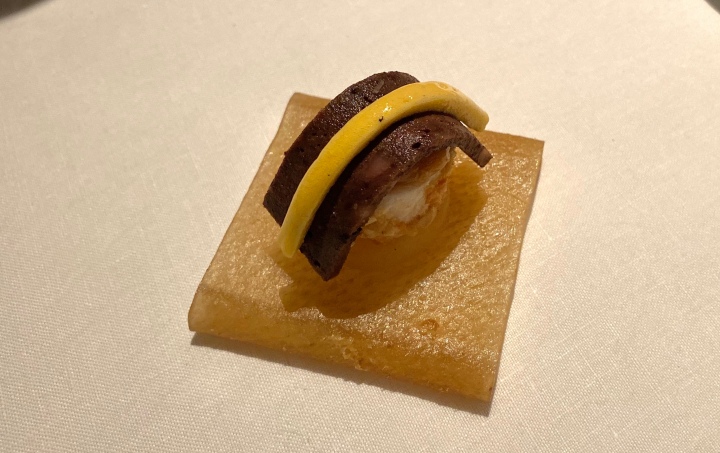 Blood sausage with buckthorn, peanut, and octopus. An unusual but very tasty combination.

I was hoping I’d get to taste the carabinero dish again, which was my favorite dish from our last visit. And indeed it returned in appetizer size. Raw shrimp, pulled beef that is subsequently deep fried until crispy, roasted sweet peppers, water melon, ginger, and X.O. cream. Still as amazing as I remembered.

The first actual course of the degustation is scampi turned into ceviche using juice of verbena with juice of Indian cress and a crispy ball with cockles and razor shells, paired well with an Altesse from Savoie in France. It took a bit long for this course to come and so the wine had warmed up too much in the glass, but that was fixed without us having to ask by adding some more (cold) wine. It is in dishes like this that you can tell the chef has worked with Jonnie Boer of the Librije, who also often uses scampi and verbena and experiments will kinds of different acids to make scampi ceviche. 9/10

Lobster with veal liver, black currants, oyster, kohlrabi, and blue cheese. This was paired with a slightly oaked Savennières, a Chenin Blanc from the Loire Valley. The wine could handle the complex combination of flavors well. The lobster was slightly rubbery, but otherwise a very nice dish. 9/10 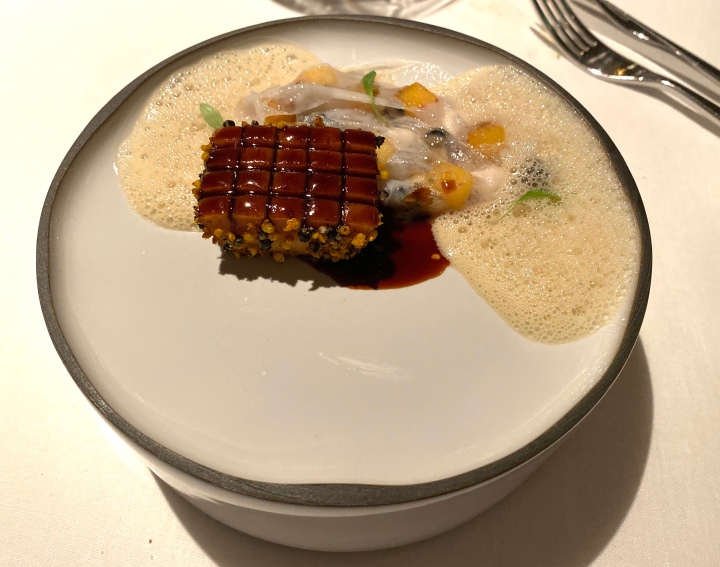 Cuttlefish lacquered with coffee, accompanied by periwinkles, cardamom, mango, and cilantro. This was paired well with a Hungarian blend with some ‘petrol’ in the nose. The unusual combination of flavors was very tasty indeed. 9/10

The sea bass that was coming up next had a ‘teaser’ that was very crunchy.

The actual sea bass dish was very good, with passion fruit, smoked mackerel, achiote, and jellyfish. For me it was unclear which part of the dish was the actual jellyfish, but that doesn’t matter because it was very good. It was paired with an Etna bianco, which could handle the passion fruit surprisingly well. 9/10 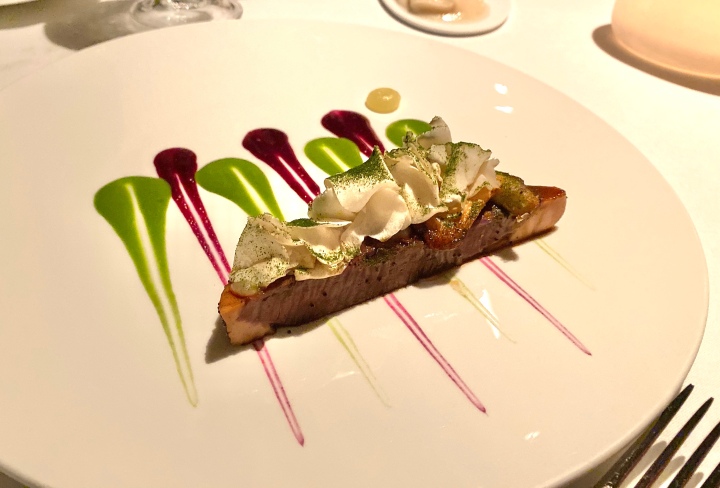 The next dish looked great, but was our least favorite of the meal. It was the breast fillet of a red grouse, topped with shaved raw porcini mushrooms and accompanied by sauces of red cabbage and dill. The grouse was served lukewarm and we didn’t like the texture very much; it seemed to have been cooked sous vide without searing, so a crust was missing. To make matters worse, the Cinsault from South Africa that was paired with it, was far too strong for the dish. Although not tannic it was quite acidic and had a funkiness to it. When I asked for another wine, I was served a Chablis that was nice by itself but did not work with the dish either as the Chablis was very dry and the dish would have needed a more creamy wine. 7/10

The selection of Dutch cheeses was served with a helpful map of the Netherlands with the names and production areas of the cheeses: goat cheese, a washed rind cheese aged in booze, another washed rind cheese, and an aged Gouda. The cheeses were nice and served at the right temperature, accompanied by some miso made from leftover bread from the restaurant. This was paired with a 2002 Riesling Kabinett from the Rheingau, that did in fact work with all of the cheeses. 8/10

The first dessert was lime leaf with beets, almond, goat cheese, and tamarillo. The beets were mostly for color, and it was paired with a Huxlrebe Spätlese from Rheinhessen. The wine was a bit simple for the dessert, but did have the right balance between sweetness and acidity. 8/10 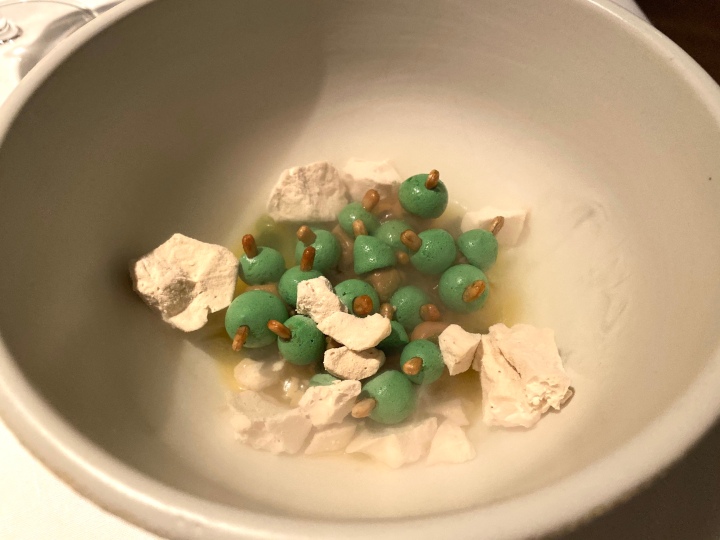 The second and final dessert was very original: licorice with tarragon, sunflower seeds, and mandarin. Unfortunately the Jurançon that it was paired with was not sweet enough for the dessert, as a nice wine pairing could have made this phenomenal. 9/10

Reading back my review from 2017, I wonder if the same Jurançon and Huxlrebe were used back then for entirely different dishes (which back then were good pairings). 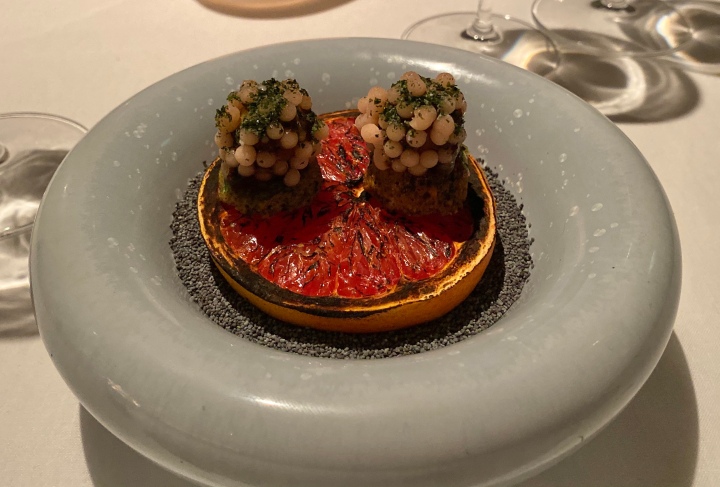 This looks the same as the first appetizer, and it is in fact a sweet version of it.

The same applies to this one.

Many of the dishes were also echoed in the flavors of the chocolates that came with the coffee or tea. They even presented an overlay for the menu to indicate which color of chocolate was linked to each dish.

The final one was hard to see on this ‘serving object’ covered with dried shii take mushrooms. The mushroom flavor in this was excellent.

We had a very nice evening at Spectrum. Perhaps our expectations were too high. Although it was very good and as can be expected from a restaurant with two Michelin stars, it was not as spectacular as our previous visit in 2017. Especially the wine pairings could be improved. 9/10 for the food, 8/10 for the wine, 9/10 for the service.

19 thoughts on “Dining in Amsterdam: Spectrum**”