Four weeks ago I had organized the first cheese & wine tasting event for friends at my house. Last night was the second evening with mostly the same wines and cheese, but some differences and better pictures. For the full story, please check out my post about the first evening.

With a caprese salad this time we had an Arneis instead of a Gavi. Both are good matches, but if memory serves me right this was slightly better because this specific Arneis was a bit ’rounder’ and therefore a slightly better match for the mozzarella than the Gavi we had last time.

Most people, including myself, found this the best match. This time we had the same Sauvignon Blanc from New Zealand but a different Sancerre from Henri Bourgeois: La Bourgeoise 2007 instead of Mont Damnés 2009. Since 2007 was a cool year, La Bourgeoise 2007 was still a bit young and therefore Le MD de Bourgeois we had last time was better as a wine. The match was still fine, also with the roasted green asparagus. (Tossed with olive oil, salt and freshly ground black pepper and roasted for 20 minutes in a 225C/440F oven.) We had the same goat cheese as last time, with the raw-milk Chevre d’Or still being one of my favorite cheeses.

We had the same South African Chardonnay-Semillon as last time, but a different white burgundy because I had run out of the one we had before. The Mercurey 1er Cru Saint Morilles 2009 from Domaine Berthenet we had this time was still a bit young but already had a beautiful minerality going on in the nose. The raw-milk Brie de Meaux was a good match with this wine, whereas the Pierre Robert was good with the South African. The roasted peppers were a good combination. (To roast the peppers, brush with olive oil and roast for 25 minutes at 250C/480F. It’s easy to peel them as soon as they have cooled off. Serve marinated with extra virgin olive oil, salt, freshly ground black pepper and fresh basil.) 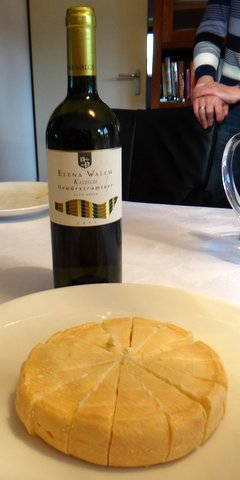 Same cheeses as last time, but slightly different wines. The matches worked out the same: young Gouda from the Beemster matched best with Chionetti Dolcetto di Dogliani Briccolero 2009, and the Emmenthaler matched best with the red Burgundy, Rossignol Trapet Beaune 1er Cru Les Teurons 2007. The burgundy had a beautiful nose. 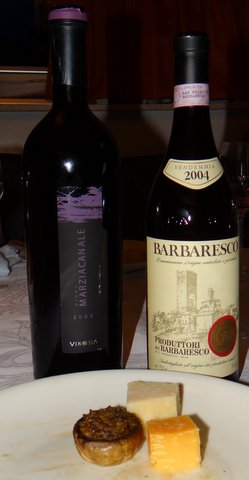 Again same cheeses with different wines. The Barbaresco 2004 from Produttori del Barbaresco was outstanding after it had been hyperdecanted. This Barbaresco from 2004 is definitely ready to drink and seems to be at its peak. Good match with the Parmigiano Reggiano. The Vinosia Marziacanala 2005, an Aglianico from Campania (Italy) was also outstanding and didn’t even need decanting. It was great with the aged Gouda from the Beemster. The stuffed mushrooms were especially good with the Barbaresco. (Sauté chopped mushroom trunks with chopped flatleaf parsley and minced garlic. Mix with grated parmigiano reggiano, bread crumbs, an egg and season with salt and pepper. Stuff the mushrooms with this mixture and bake for half an hour or so at 180C/355F.)

We ended the evening with the strongest cheeses: Roquefort and Saint-Agur. They both went well with the Sauternes: a Rayne Vigneau 1999, especially in combination with fresh pears. The vintage port, Quinta da Romaneira 1994, was excellent: ready to drink and probably at its peak. However it was not an outstanding match with the blue cheeses, instead it was great with the aged Gouda from the Beemster.