This is another dish that came out of the collaboration with Teun and Albert. I wanted Teun to try octopus sous-vide, and I remember how much I liked the char-grilled octopus at La Madia in Sicily. Although we ended up doing something different, our original idea was to do something along the lines of the octopus dish from La Madia. That dish featured a rock. Due to timing constraints (and also because the rock at La Madia wasn’t very tasty even though it looked great), we decided to go for a soft octopus sponge cake instead.

Recently, Paul of That Other Cooking Blog wrote about a microwave brioche. This is a trick that was originally devised by Ferran Adrià of El Bulli. A batter with a lot of eggs is siphoned into paper cups with nitrous oxide and then cooked for 30 seconds in a microwave oven to get a sponge cake. As octopus leaks a lot of juices when cooked, we thought it would be nice to reduce those juices to a thick octopus syrup and use that to flavor a sponge. We thought it would pair well with a bell pepper coulis, and when we realised our menu needed more vegetables we also included some oven-roasted romanesco (green cauliflower).

The resulting dish had great flavor with multiple layers. Charcoal grilling gave the octopus a very nice flavor and all the components paired very well with each other. The plating did not turn out as nice as we had hoped. Next time we will have to make the sponges bigger and perhaps we can try to make more of a rock by putting the sponges in a dehydrator. We parcooked the romanesco sous-vide, which is good for the flavor but it did lose some of the green color. The red of the bell peppers also didn’t work very well with the pink/purple of the octopus. So the flavor was outstanding, but, although the photo doesn’t do it justice, we will improve the plating. Here’s what we did.

Remove the eyes and the beak of the octopus. Cut off the arms.

Season the octopus parts with salt and freshly ground black pepper and vacuum seal. Cook sous-vide for 3 hours at 85C/185F. (You can cook the head and body of the octopus along with the arms to serve them in another way. We had them as an amuse bouche, simply served with extra virgin olive oil, lemon juice, and some parsley.)

Break the romanesco into florets, vacuum seal and cook sous-vide for 1.5 hours at 85C/185F. (Conveniently, the same temperature is  used for the octopus and the cauliflower.)

Roast the bell peppers in the oven at 250C/480F for 25 minutes. Let them cool in a closed plastic bag. Remove the skin and the seeds. 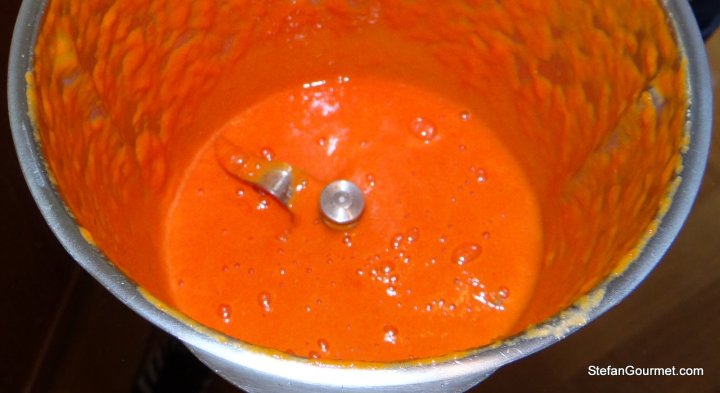 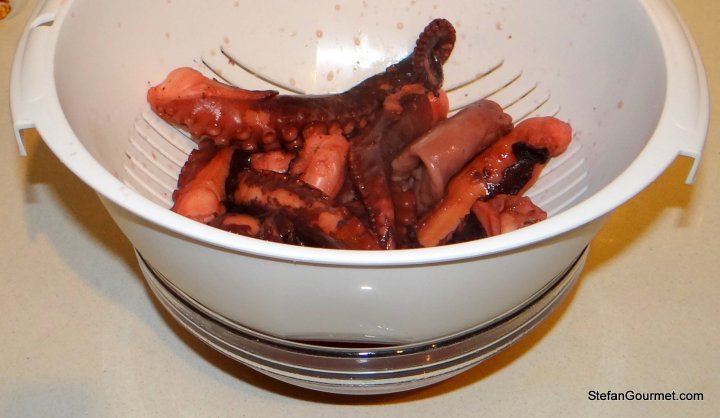 Once the octopus is cooked, collect the juices.

Put the juices in a wide shallow pan and reduce them over medium heat, stirring on a regular basis, until very thick and syrupy. 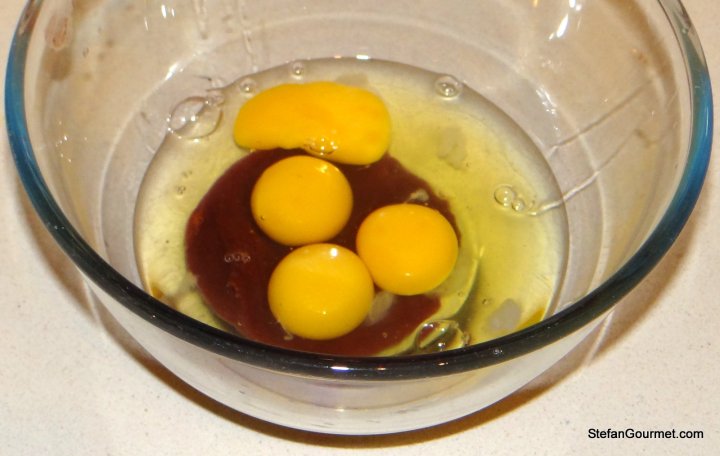 Combine the eggs with about 3 Tbsp of the octopus syrup.

Whisk to mix. Then whisk in the flour. Add 1/2 tsp of sugar and a few drops of lemon juice.

Prepare the paper cups by making 3 holes in the bottom of each cup. 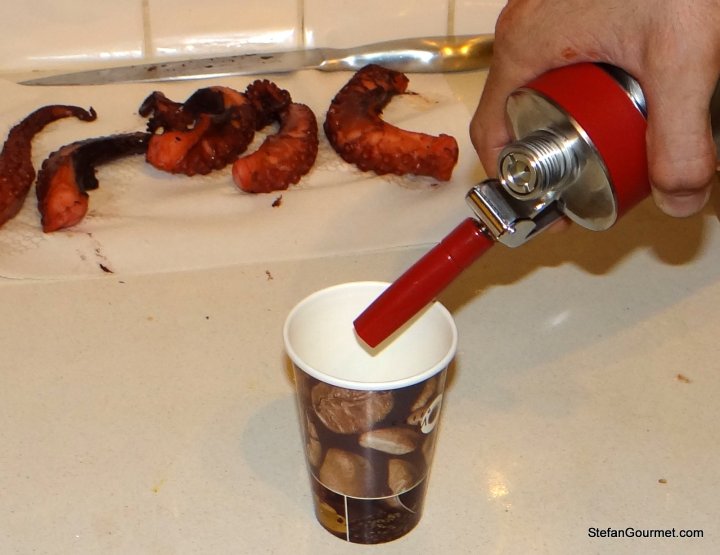 Fill the whip with the batter and charge it with nitrous oxide.

Siphon the batter into the cups, filling them only half way. Cook each cup individually in the microwave oven for 30 seconds. (Unfortunately none of the photos I took of this came out well.) 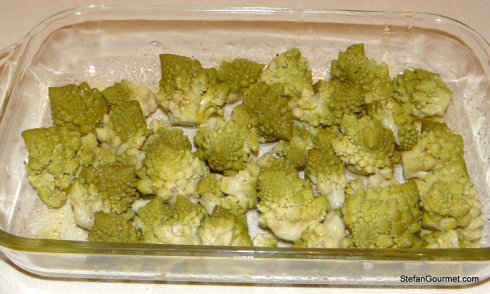 Once the romanesco is cooked, toss with olive oil and roast in the oven for 15 minutes at 225C/440F. 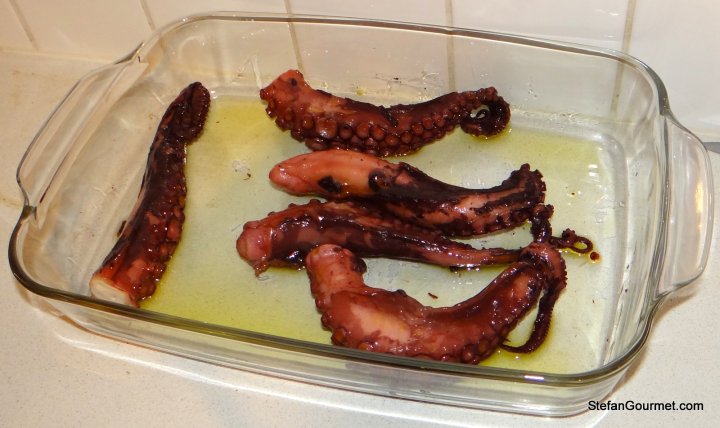 Grill the octopus legs on a very hot charcoal grill. Turn them quickly as they should not burn and remember that they are already cooked.

This dish has strong multi-layered flavors, so you need a dry white wine that can hold its own against that. We enjoyed it with a pinot bianco from Alto Adige.