There are not many female chefs with Michelin stars. Probably the best known in the Netherlands is Margo Reuten. Together with maître and sommelier Petro Kools she runs Da Vinci in Maasbracht in the south of the Netherlands in the province of Limburg. I’ve been curious about this restaurant for a while, and last night we finally went there. We arrived in style in a 1958 Rolls Royce, a hobby of the hotel we stayed at. We were welcomed by Petro and notice that Margo wasn’t around. Later we found out that for personal reasons she’s away from the restaurant for quite some time. Chefs have an important role in their kitchens, and we usually notice it when the chef isn’t there. That also seemed to be the case this time.

Da Vinci offers menus of 3, 4, 5, 6 or 7 courses, with matching wines. The wine list is very impressive, but so are the prices. We chose the ‘culinary arrangement’ of 7 courses with wine, champagne, coffee, and water (200 euros per person). Instead of the champagne we had a very nice glass of a local riesling brut, Apostelhoeve 2012. This méthode champenoise of riesling had a great nose and very fine mousse. 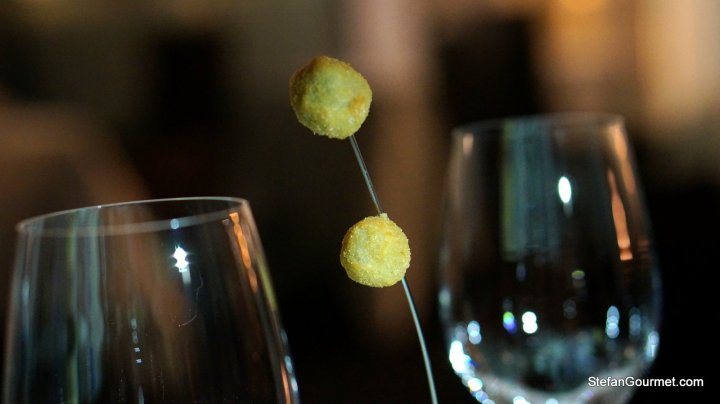 The final amuses were eggplant ‘bitterballen’, which unfortunately didn’t have a lot of eggplant flavor. The amuses all looked very nice and were the more innovative of the evening. 8/10 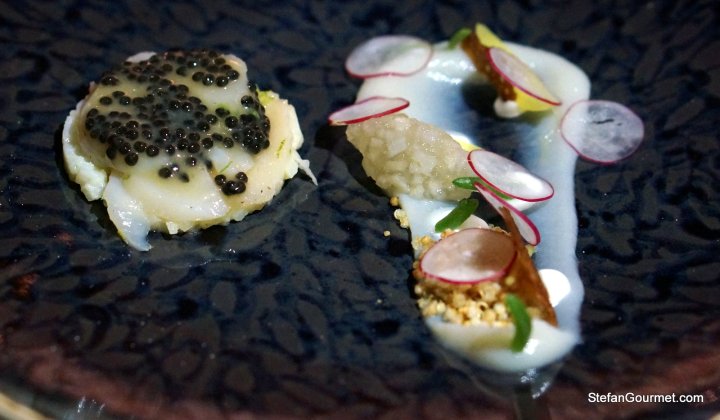 The first course of the menu: marinated scallop with cauliflower and caviar, cauliflower puree, apple, radishes, and something crispy.

Also part of the first course: a king crab cocktail with shaved fennel and lettuce. All of this paired with a 2012 sauvignon blanc kabinett from Baden (Germany), which was served a bit too cold but worked well with most of the elements of the first course. A lot of different flavors in this course that certainly did not clash, but not spectacular either. 8/10 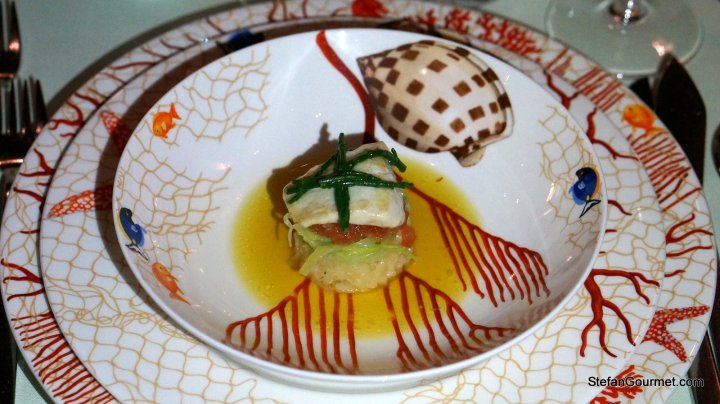 The second course was again a combination of two different dishes. The first a lemon risotto with sea bass and a saffron stock.

The other part was ‘caramelized’ lobster with shaved fennel and the same dressing as on the king crab cocktail. The oaked roussane/viognier from Gard in the south of France was very nice, but a bit strong for the subtle flavors of the dish. The seabass was perfectly cooked, but the risotto was not al dente and the stock was a bit low on flavor. 8/10

The red-legged partridge came with shaved truffle, sauerkraut, apple, and porcini mushrooms, a very classic dish. The 2006 ‘Schieferterrassen’ riesling (from a slate terror in Mosel) was very nice and worked quite well with the apple and sauerkraut, a bit less with the partridge. The partridge breast was tender and juicy, but the leg was tough and dry. This shouldn’t happen in any restaurant, and certainly not with two Michelin stars. Since it was a big portion for only the third course out of seven, we didn’t send it back and enjoyed the breast instead. 6/10

The next course: duck confit, ballottine of foie gras, foie gras icecream, foie gras bonbon and red port jelly was the best of the evening. Layers of deep flavors that worked very well together. The crispy beetroot cylinder had a very good beetroot flavor and was very crispy. It almost seemed like a dish from a different restaurant. The pairing with a chilled Graham’s tawny port worked well, although a slightly better tawny port (e.g. 20 years old) would have been nice. 9/10

Fillet of roe deer with creamed beetroot, brussels sprouts, red cabbage, and onion raviolo, another classic dish. Perhaps it’s because I’m not a big fan of either brussel sprouts or red cabbage, but I wasn’t crazy about this. The roe dee was nicely medium rare, but it tasted more ‘gamey’ than I like (and roe deer doesn’t have to taste like that). It was first paired with a 2009 Ripasso from Veneto, but that had so much ‘green bell pepper’ (i.e. unripe grapes or stems) that we didn’t like it at all. Without any discussion it was replaced with a South African bordeaux blend that worked quite well. 8/10

The cheese dish: marinated pineapple with blue cheese (fourme d’ambert). The combination was okay and worked with the late harvest sémillon from Chile. A little more of the blue cheese would have been nice.

Instead there was some other cheese on the side, comté and reypenaer; not sure why they were included. 7/10 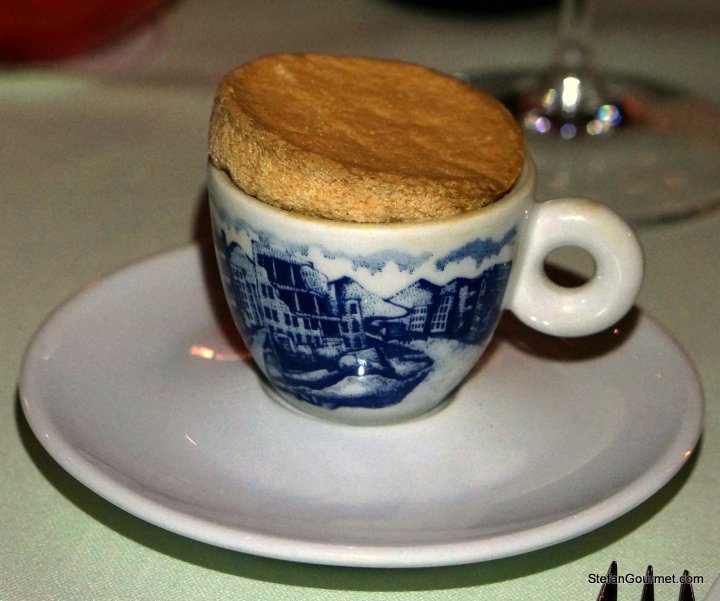 As well as a soufflé. The beerenauslese was quite nice with this. A nice selection of desserts. 8/10 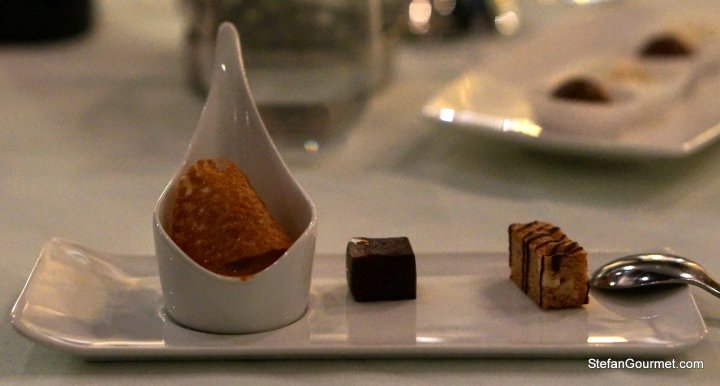 With the coffee came the sweets. Crème brulee, a bonbon and nougat.

These mint marshmallows were quite nice.

Our dinner a few days ago at Bord’eau was a tough act to follow. For the same price level and same amount of Michelin stars, I think Bord’eau is a lot better than Da Vinci. This may in part be due to the absence of the chef at Da Vinci. The food was good but not as special as I had expected at this level. There is nothing wrong with ‘classic’, but then it has to taste exceptionally good.  I’m scoring 8/10 for the food, more suitable for a one-Michelin star than for two stars. The wine was good, 8/10. What stood out at Da Vinci was the service, which I rate 9/10. The serving staff was very competent, friendly, and swift. The wine we didn’t like was replaced without any discussion — the waiter even let us know he agreed with us that it was not up to standard. And after dinner they drove us back to our hotel, free of charge.

9 thoughts on “Dining in the Netherlands: Da Vinci**”