After eating at Bord’eau in July I wrote “I wonder when chef Richard van Oostenbrugge will get his well-deserved second star. We’ll be back!” in my blog post about that wonderful dinner. I didn’t have to wonder for long, as Bord’eau has indeed just received its second Michelin star. Van Oostenbrugge was also announced by Gault Millau as “Chef of the Year 2014”. All of this calls for a celebration, or a good excuse to go eat there again 🙂

Bord’eau is located in the l’Europe hotel in Amsterdam by the Amstel river. The dining room has a nice view of the water and stylish modern yet warm decor. I especially like how the tables are lit so that the food stands out without too much light. (This also makes the photos come out okay, even though they were taken with my iPhone.) The chef comes out personally to greet all the guests when they arrive and at the end of service he came around for a longer chat. Maitre Richard Eerhardt seemed to remember me from my previous visit. We ordered the 6-course degustation menu (96 euros) with matching wines (78 euros), and started off with a glass of the very nice house champagne. All 6 courses are different from the degustation as it was served in July (which was confirmed by the waiter after I showed him the photos of the dishes in my previous post on my phone — very handy). 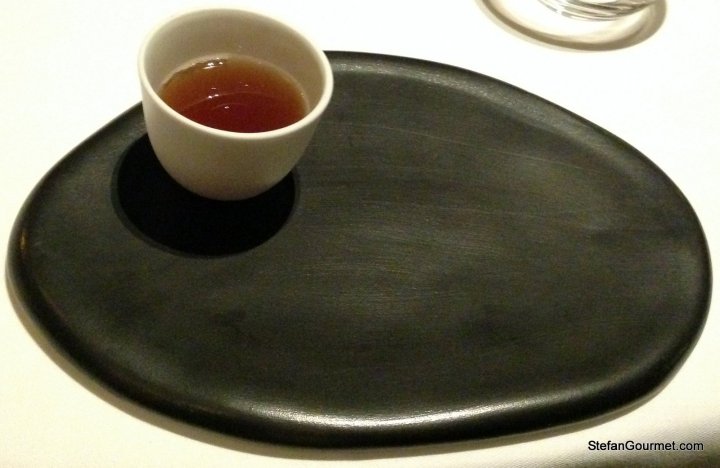 The first amuse is duck ‘tea’. It didn’t taste like tea but like duck, nice and strong.

The second amuse looked familiar, but it was slightly different as it was stuffed with crab rather than Dutch lobster (which is out of season). Very crunchy on the outside and very tasty. 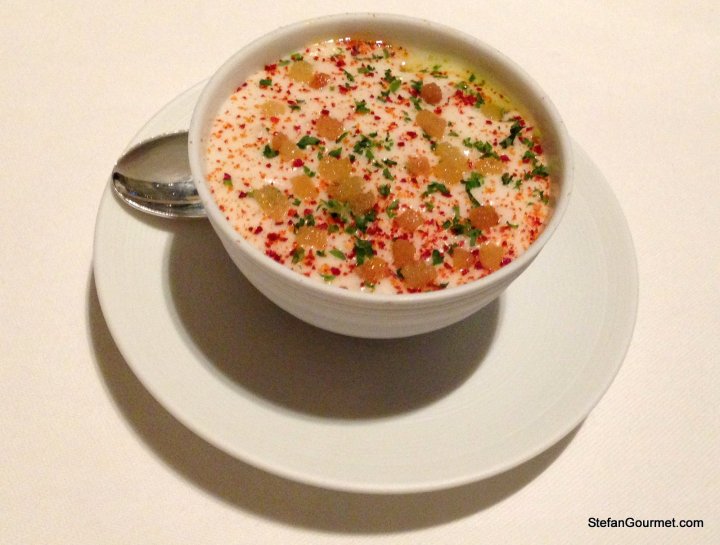 The final amuse was a miniaturized version of one of the dishes I had in July: ‘marrow’ (made from potato) with veal tartare and caviar and veal demi glace. Impressive! The amuses worked very well with the champagne and was again a great set, 9/10.

The first course of the menu: jerusalem artichoke foam with raw sea scallop from Brittany and black truffle. The combination of the earthy flavors of jerusalem artichoke and truffle worked really well with the freshness of the sea scallop. The ‘basket’ added something crispy to the dish, although it was a tad sweet. The pairing with an old vine verdejo was very good. An ordinary verdejo would have been too fresh, but this one had more concentration due to the old vines and more roundness. 9/10 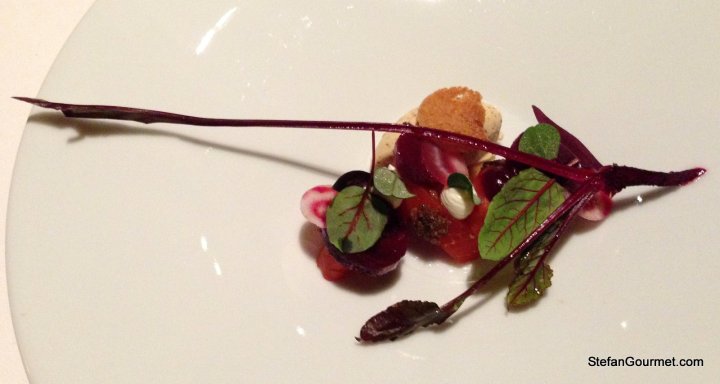 The chef likes beetroot roasted in salt, as that seems to be a constant factor in his menus. The beetroot becomes very tasty when prepared this way, as the salt draws out some of the water and thus concentrates the flavors. Here the beetroot is paired with mustard icecream (with a very nice crunchiness) and marinated organic salmon. A very good balance of flavors, completed by the chenin blanc from Pfalz (Germany). Chenin is mostly known from warmer regions such as the Loire in France or South Africa, but thanks to the micro climate in Pfalz the grapes still ripen although the wine (just like the verdejo) is unlike other chenin. It works very well with the beetroot, so another great find of sommelier Daphne Oudshoorn. 9/10 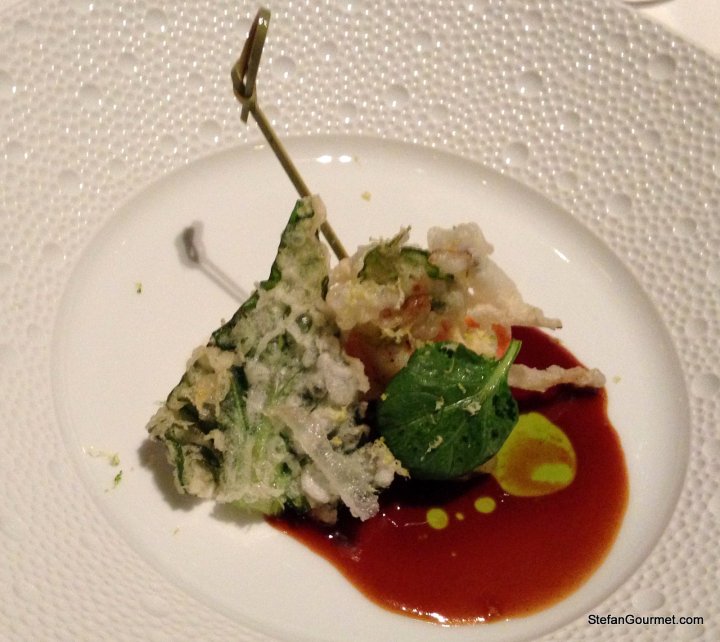 The langoustine (hidden behind the tempura of vegetables) had the best cuisson I’ve ever had. Langoustine is very difficult to cook right, as it overcooks very easily and then becomes too soft and the flavor loses its freshness. This one was cooked just perfect. It was served with own ‘jus’, cilantro oil, and coconut, and a skewer of langoustine marinated in a fruit called ‘hand of Buddha’. As with the other dishes, the flavors were perfectly balanced and blended into one. Even the cilantro blended in perfectly. The tempura was perhaps a touch too crunchy rather than light and crispy, but that is a minor detail. The wine pairing with a viognier, again an usual one as it was quite light, was very good. 9/10

The fillet of sole was perfectly cooked and served with a sea-urchin sauce (that was very mild), crunchy fennel, braised fennel, and citrus gnocchi. A crunchy element was provided by a crunchy piece of sole skin. The combination of flavors worked very well, and the pairing with a godello from Galicia was simply outstanding. This is the type of wine pairing that only happens once in a while: the wine and the food interact and make new flavors stand out in each other. 10/10 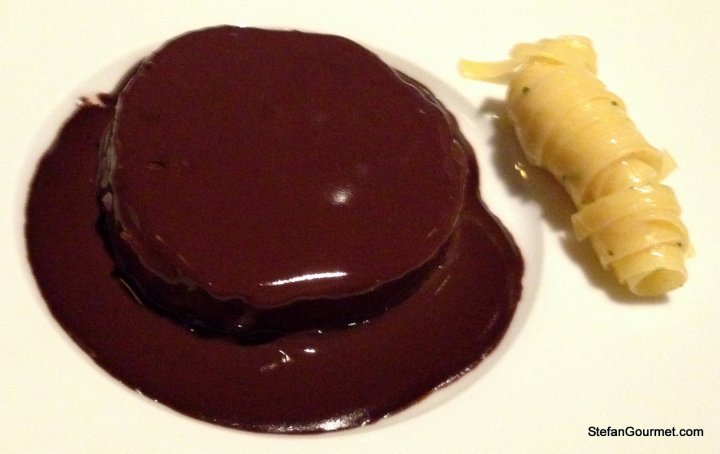 Lièvre à la Royale is a classic French dish that is made from a hare (jackrabbit) with its liver and its blood. This is a very rich traditional dish that takes a long time to prepare. When the chef came to our table to chat, he said that he felt it an obligation to keep preparing such dishes to keep the tradition alive. He served it with very good fresh tagliolini, of which more was available on request. The excellent bordeaux blend (cabernet sauvignon, cabernet franc, merlot) from South Africa was a very good match and the ‘jammy’ character really helped to make the dish seem ‘ligther’. The wine was ripe without being too heavy, another great find. 9/10

These palate cleansers were nice.

The dessert was a showcase of technical prowess: an apple tart with a transparent ‘apple’ on top with inside a ‘core’ made of apple sorbet ice cream. The ice cream and tart had great taste. The transparent apple tasted mostly of sugar. The wine was another unusual one: a late harvest white wine from red grapes from Austria. It wasn’t too sweet and worked very well with the dessert. 9/10 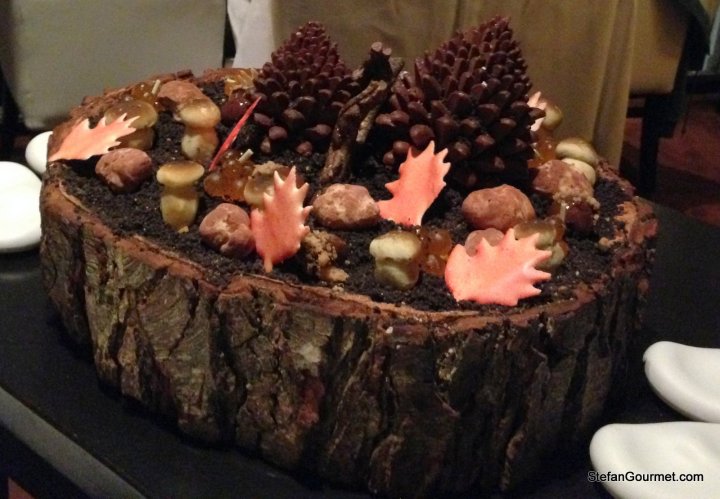 What strikes me most about Bord’eau is the constant high level of all the food and wines. In most gourmet restaurants we visit, some dishes are okay, most are very good, and some are outstanding. The same goes for the wines at other restaurants, and the wine pairings usually even have some serious flaws. At Bord’eau all the dishes were very good, all the wines were very good, and all the wine pairings were good to outstanding. I scored all the food at 9/10, whereas even at El Celler de Can Roca I scored some dishes ‘only’ 8/10. (I did however also score several dishes at Can Roca at 10/10.)

When we mentioned our opinion to the sommelier and chef, they reacted quite modestly. The chef made it very clear that he’d not accept mediocre wines or clashing wines to be served with his food. It was also clear from our conversations with them that they are both very passionate about food and wine. We also noticed that all of the staff could answer all of our questions about the food, which is a good sign.

What I like about the food of Van Oostenbrugge is that he combines a few flavors to create a good blend. The food looks great without cluttering the plate with too much stuff. I was not surprised that he mentioned El Celler de Can Roca as his favorite restaurant, as I notice some similarities in style. I’m keeping the overall score at 9/10 for the food, but it’s close to 9.5/10. For the wine I’m taking it up to 9.5/10 and the service is a solid 8.5/10. I consider Bord’eau to be the best in Amsterdam. Even a third star should not be impossible…

25 thoughts on “Dining in Amsterdam: Bord’eau**”