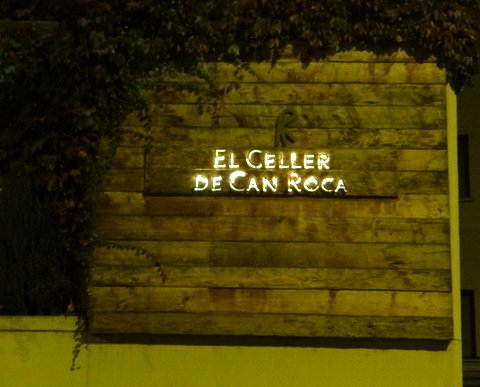 El Celler de Can Roca is the restaurant in Girona (Spain, 1.5 hours from Barcelona and close to where El Bulli used to be) of three brothers: chef Joan Roca, sommelier Josep Roca, and patissier Jordi Roca.  Since for me the wine and especially the wine pairing is very important for a great dinner experience, the combination of a famous chef with a famous sommelier was already a good sign for this restaurant. (My favorite restaurant in the Netherlands, and one of my favorites in the world, is the Librije in Zwolle, run by chef Jonnie Boer and his wife sommelier Térèse Boer.) Other good signs are that it is ranked as number 2 on the World’s 50 Best Restaurants, and has three Michelin stars. The prices are also very reasonable for a three-star restaurant (slightly over 250 euros per person for the 21-course degustation including wine pairing and coffee, less for the tasting menu with less courses). The final reason why we took a plane to Spain just to eat at this restaurant was that Joan Roca is the author of one of the first books on sous-vide cooking, La Cocina al Vacio. So when I called them in February and asked them when they had the next available table on a Friday or Saturday and the answer was in November, I booked it straight away. We made a weekend trip out of it and also visited Barcelona and dined at Lasarte, but that’s for another post.

Apart from being the sommelier, Josep also seems to be the face of the restaurant, as we only saw him but not Joan or Jordi. We should probably have reminded them about the promised tour of the kitchen in order to meet the  other brothers as well, but our server had suddenly disappeared and we were a bit tired after all the courses and all the wine. Josep seemed a bit shy, but that may have been due to a limited command of English (and an unexisting command of Catalan or Spanish for us, although we can read it quite well). 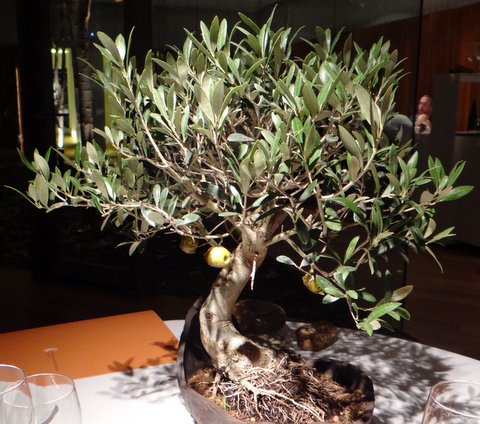 The first things you get are a glass of cava and a very nice bonsai olive tree with some great-tasting “caramelized” olives that you can eat from it. We have seen a presentation like this before, for example at Noma, and I don’t know who came up with it first, but it’s fun and the olives were really good with some crunchy iberico bacon and a very nice sweetness.

The Roca brothers believe that it is best to have many small courses and small pours of a different matching wine with each course so there is no reason to comprise on wine pairings, and I can’t agree more. You can also opt for the tasting menu if you prefer a smaller number of more substantial courses, but we chose the aptly-named 21-course “Feast” menu. The wine list is so big that it comes in a cart, but if you like wine pairings then I would strongly recommend to put yourself in Josep Roca’s very capable hands.

Even though the servings are small, it is a lot of food and you certainly don’t have to worry about leaving hungry. You will probably regret it if you eat too much of the (great) bread in the beginning of the meal. The whole meal took about 3.5 hours.

The menu starts with a series of ‘amuse bouce’. The first set is called “The World” and is served like this with something that looks like a chinese lantern around it. 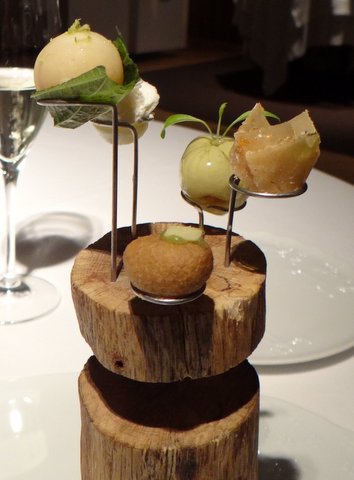 Inside are five small bites, each representing a different country: Japan, Mexico, Peru, Morocco, and ‘Scandinavia’. Roca says that besides using good local produce (which he does), you should also use products and inspiration from around the globe, and this set of bites illustrates that. They were all technically sublime and delicious: miso and wasabi for Japan, guacamole for Mexico, ceviche for Peru, tajine spices for Morocco, cottage cheese with dill for Scandinavia. The Albet i Noya Cava El Celler Brut was good with it. 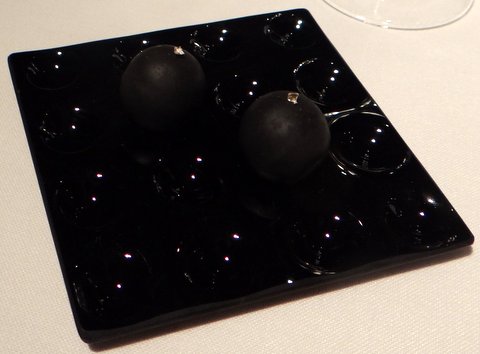 … and artichoke omelette. I especially remember the artichoke because it tasted very much like artichoke and was also very good, which I think is quite an accomplishment since artichoke is often either bland or bitter. 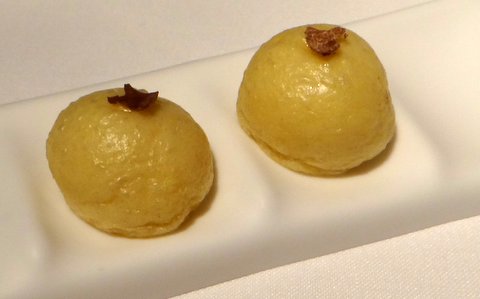 …and white chocolate truffle. I am not a huge fan of truffles, but these were amazing. 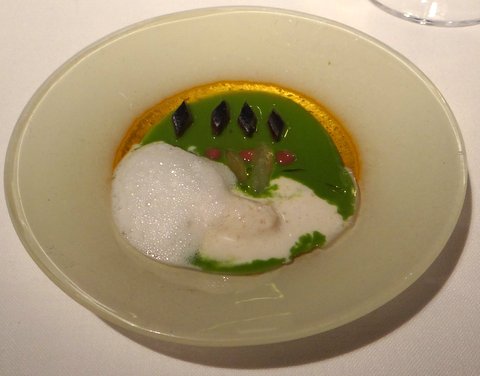 White asparagus Viennetta. I’m not sure if Viennetta is known around the world, but in Europe it is a cheap mass-produced frozen dessert of layers of vanilla ice cream and chocolate that does not even contain real chocolate. It is only the appearance that is copied here: it is white asparagus ice cream (!!!) with black truffle powder. The black truffle does not only make it look like Viennetta, it also goes very well with the asparagus ice cream. The ice cream has a delicious asparagus taste, but it is also sweet! And it gets even better: it was paired wonderfully with an off-dry Mosel Riesling Kabinett Weingut Joh.Jos.Prüm Wehlener Sonnenuhr 2007. Wow is all I can say. Original, funny, delicious and an amazing wine match. I think it’s silly to give 11/10, so 10/10 it is. This is definitely something that I’ll use as inspiration for a dish of my own. 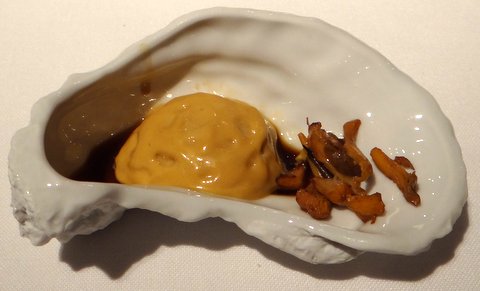 “Oyster with game meat hollandaise sauce.” I think this may be a translation error, as the oyster was served with mushrooms. The oyster was cooked (sous-vide?) and served with another dry sherry, this time La Bota de Amontillado No 37 Sanlúcar de Barrameda. Original presentation in an oyster ‘plate’. 8/10

“A whole prawn”: charcoal-grilled king prawn, head juice with seaweeds, seawater and sponge cake of plankton. The ‘head juice’ was a very concentrated shrimp stock. The shrimp was very tender and the deep-fried shells were also very good with a very concentrated flavor and interesting crunchy texture. Good pairing with a Viña Tondonia 1997 white Rioja. The Rioja seemed a bit ‘old’ at first, but it came to life with the dish. 8/10

Red sea bream with endive, gentian and citrus. Beautiful dish with a fish bone. The sea bream was cooked perfectly sous-vide, but also had a very nice charcoal flavor on the skin. I also liked the endive very much. Excellent pairing with a dry Tokaji 2007 from Oremus (known for sweet Tojaki), a very good and unusual wine. 9/10

Iberian suckling pig blanquette with Riesling, mango terrine, melon and beetroot, beetroot purée, black garlic, onion and orange concentrate. Amazing technique: the suckling pig was very tender and succulent (cooked sous-vide), but the skin was amazingly crispy to the point of being brittle. Roca got inspiration from Peking duck for this dish. As a special touch, the oregano flower at the top had to be eaten last as a palate cleanser. Great pairing with another Riesling, this time Dr Bürklin Wolf Pechstein 2007 from Pfalz. 10/10

Red mullet cooked at a low temperature (again sous-vide). Served in a very tasty strong stock and three ‘gnocchi’ with different flavors. Paired with Carles Andreu 2010 Trepat from Conca de Barberà, a red wine from the local trepat grape. Red wine with fish is not a usual combination, but it worked very well. The fish was very tender and succulent. 10/10

By this point we were starting to feel quite full, but the wood pigeon (cooked sous-vide) with onion, curry-caramelized walnuts, juniper, orange peel, and herbs was so good that we finished it anyway. The Idus Vall Llach 2006 from Priorat was another good wine pairing. 9/10

The first dessert: another beautiful plate. Maple syrup cream with pear, walnut and cardamom. Served with a pear cidre from Normandy (Sidre Poiré Granitte 2008 Eric Bordelet) that was not sweet enough for the dessert. 8/10

The “Girona’s fair caramlised apple” was of course not a real apple, but very sweet and really reminiscent of something you’d eat at a fair with the cotton candy. Good pairing with a sweet Garnatxa Sol i Serena from Epordà. 8/10

With the coffee came a big cart full of sweets, chocolates and cookies. They were all amazing and served on a  very nice custom-made ‘plate’. A worthy finale of this amazing dinner.

I had high expectations for my first dinner at Celler de Can Roca, but they were definitely exceeded. This was one of the best meals of my life, and this restaurant is now among my favorite restaurants in the world together with Librije and RyuGin. I just love how the food is surprising and beautifully presented without the show taking precedence over taste, how they match a different wine with each dish, and how it is delicious real food, original without being gimmicky, good combination of local-inspired dishes and ideas from all over the world. Food overall 10/10, wine 9.5/10 (I would have given 10 except that I don’t like wines with an oxidized style so much). Service was friendly but clearly a bit less organized than at comparable restaurants, 8/10. Can’t wait for the next time!