Every year since De Librije has been awarded its third star (in late 2004) we have celebrated our wedding anniversary on June 15th with a dinner at De Librije. The first time in 2005 was very special, as it was our first dinner at a three-star restaurant and we were completely blown away by both the food and the wine. As I’ve written before, follow-up visits to a restaurant are like sequels to a movie: it is hard to beat that first great experience. But De Librije has held up quite strongly, and that’s why we keep coming back. Soon De Librije will be the only three-star restaurant in the Netherlands, as Oud Sluis is going to close. This is the second time we’ve been to De Librije since I’ve started blogging — click here to read last year’s review.

Librije also has its own hotel, and the story of this year’s culinary adventure starts there. When arriving in the room, there is always some kind of fancy patisserie waiting as a welcome. This time it was these orange popsicles, which are actually not icecream but filled with mousse. 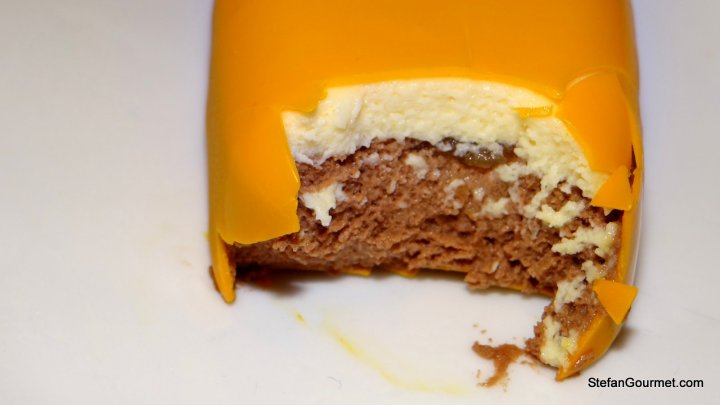 The flavor is hard to describe, it was a very complex flavor with a lot of different layers. It definitely was delicious! 10/10

Some hours later our dinner at the restaurant started with a series of amuse bouche. Almost all of them are different from last year, and even the crunchy peanut with gherkin is gone. This first one is fermented red cabbage juice and was very good.

The fins of halibut, very tender and tasty and a great contrast in texture with the crunchy toast. I already expected there would be something underneath those talls cups…

…and there was. The toasted grains were added by the waitress.

Nice and crispy with powdered mushroom.

Another repeat from last year: tartare served on your hand. Another great set of amuse bouche, 9/10.

The setup of the menu has changed: you can now select 4 out of the 8 courses of the degustation menu. The courses are not described in detail; you only pick the main ingredient and the rest will be a surprise.

The first course looks deceivingly much like last year’s. For the first selection I had picked “goose foie gras” over “oyster” and “kohlrabi”. Like last year, the main ingredients are goose foie gras and crab. However there are two main differences: this year it’s fermented beetroot instead of red cabbage, and almond instead of hazelnut. The dish is paired well with a Silvaner from Franken in Germany. I liked last year’s combination of flavors slightly better, so this year I’m giving this 9/10.

Next scampi ceviche, with the scampi ‘cooked’ in kombucha rather than citrus juice. Kombucha is a fermented ‘tea’ made by a ‘mushroom’. The scampi only provide the texture (very unctuous) and not the flavor. Served with celery. Paired well with an Albariño from Galicia. Very original dish. 9/10 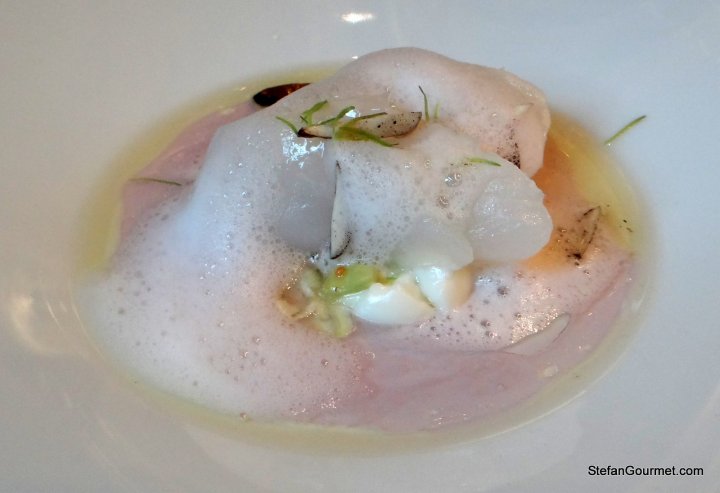 Cod confit with cabbage, fir tops and ‘wet’ almond. The cod had a very interesting texture as it wasn’t dry or flaky. All very ‘light’ flavors, paired with a 2011 white burgundy with a good balance between oak, citrus, and minerality. The dish would have been even better if it were to have the same strength of flavor as the wine. 9/10 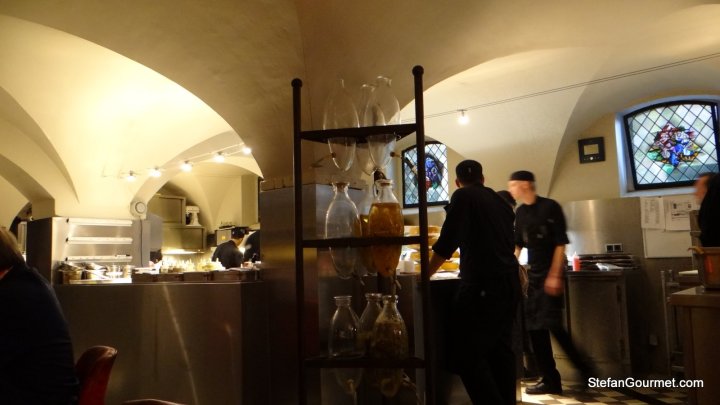 We had inquired about dining at the chef’s table, but that is usually only possible for groups of 6 and larger. However, there had been a cancellation so after the third course we were taken to the kitchen in the basement.

It was allowed, and even encouraged, to walk around and ask questions. It was absolutely amazing to see how quiet, disciplined, well organized, and clean everything was. I suppose having guests down at the chef’s table on a daily basis helps to enforce the discipline needed for this. Everybody we saw knew exactly what he was doing and how to do it.

I’ve been wanting to get a more powerful gas torch for a while, but didn’t know what to get as I had red about the wrong type of torch giving off flavor to the food. So we asked what they were using here. It turned out to be a relatively straight-forward propane/butane burner. 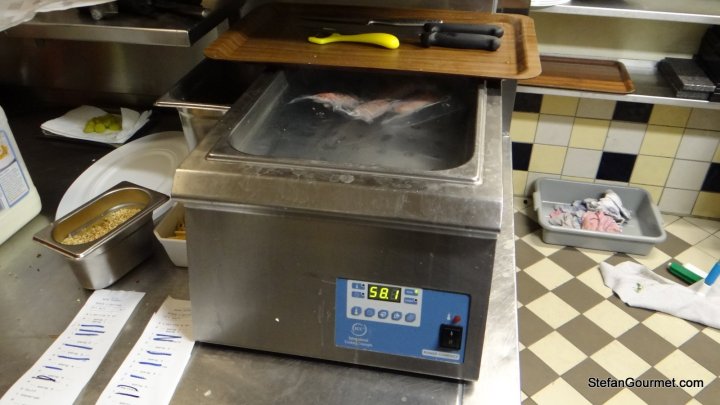 Of course there is also sous-vide equipment in a kitchen like this. The water in this ‘Roner’ as the chef calls sous-vide (named after ROca — of Celler de Can Roca — and caNER, who developed the equipment) is pumped around a lot, which makes the bags with protein ‘swim’ in the water bath. I forgot to ask what was cooking here at 58C/136F.

Our first course ‘downstairs’ was this vegetarian dish with tomato, black bean, and beetroot. Very interesting flavors, and paired well with an Austrian pinot noir. 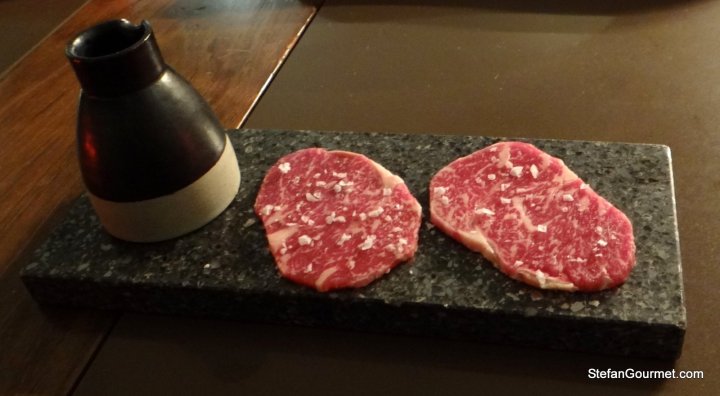 The second selection I made was ‘milk cow’. (The options I did not have are “monkfish” and “egg yolk”.) This turned out to be dry aged rib eye of a cow that after a live of giving milk, has been fattened up to be slaughtered. As you can see the beef looks almost like wagyu.

The beef was cooked on the table by the chef himself on rocks of 140C/285F, sprinkled with porcini powder.

The beef was then served with veal marrow and a sauce made of citrus geranium. 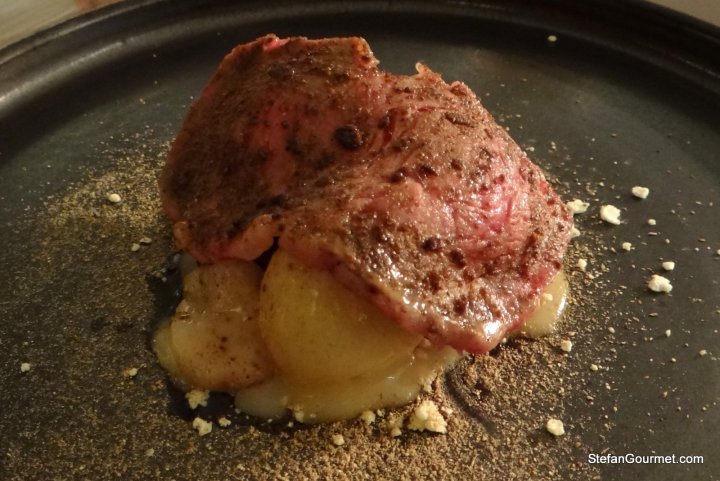 This is how the beef looked on the ‘cooked’ side. The beef was paired with a tempranillo from Australia that was unlike tempranillo as we know it from Spain, very nice. Very good flavor in this dish and a very original ingredient. 10/10 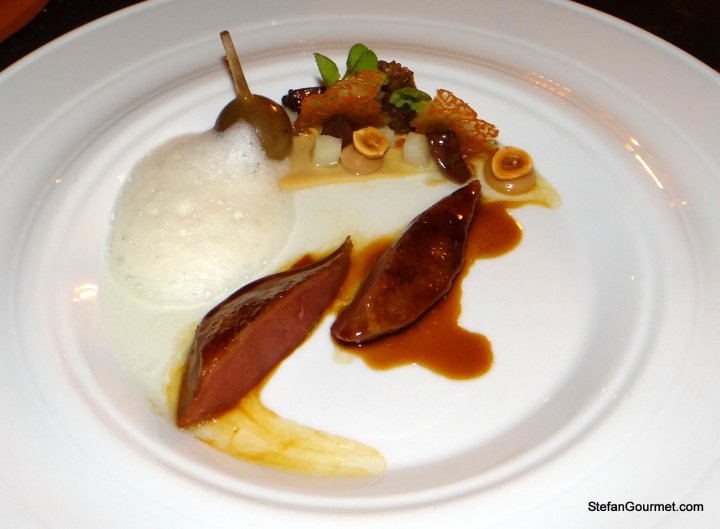 The next selection was “farmed pigeon” (I did not pick “lamb” or “asparagus”.) The pigeon was cooked perfectly and served with hazelnut and star anise. Paired well with a nice Chianti Classico. The pigeon had a lot of flavor as it was cooked exactly right to have the optimal combination of flavor, juiciness, and tenderness. 10/10

The first dessert was white chocolate and pistacchio, combined with dill! Very original and very tasty, and paired well with a muscat. 10/10

For the final selection, I had picked “rhubarb” rather than “sweet thai green curry” or “epoisses”. The rhubarb came with rice pudding and black cardamom, and was paired with a nice auslese from Austria. 9/10

It wasn’t finished yet, because there were some lovely chocolates…

…as well as this chocolate thingy…

…and something served in ice.

Another great dinner at Librije!  It was an amazing experience to watch the kitchen from the chef’s table. The service and ambiance at the chef’s table are different from being seated upstairs, even though it is not very formal there either and we always feel at home. Food 9.5/10, service 8.5/10, wine 9/10.

The culinary experience is not finished, because the following morning we had breakfast at the hotel…

The breakfast started with these profiteroles with aged Dutch cheese and apple syrup. 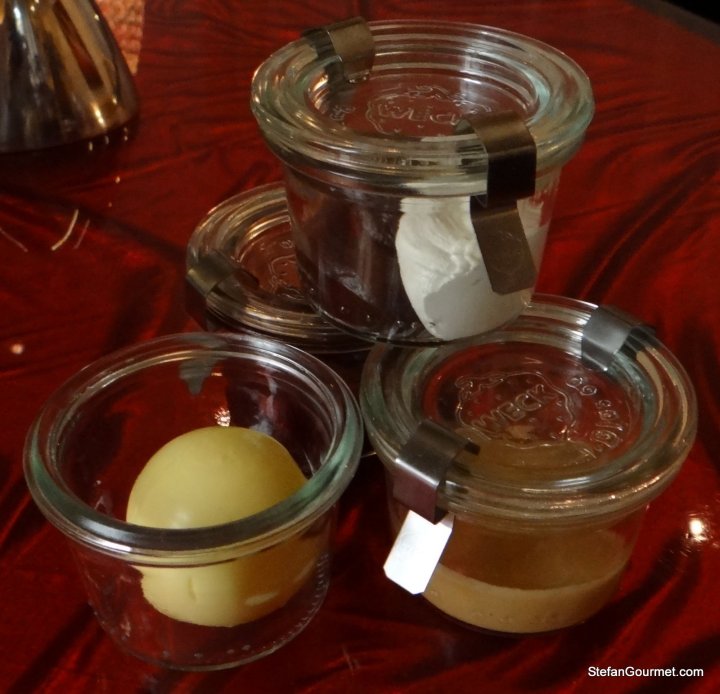 A ‘pizza’ with prosciutto and goat cheese. 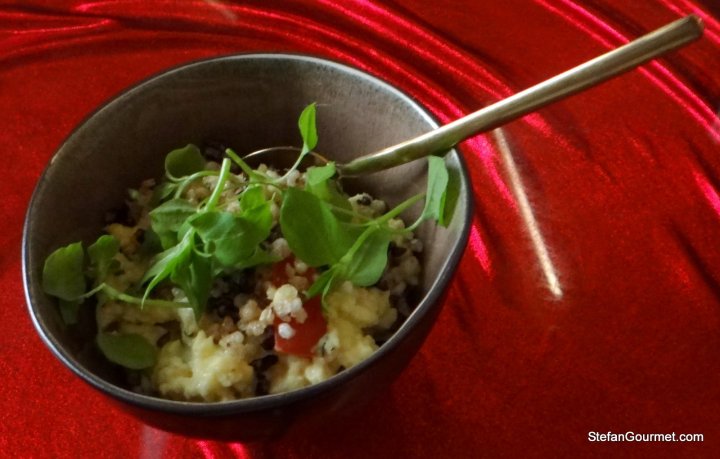 Scrambled egg with tomato and tarragon.

35 thoughts on “A Culinary Experience in the Netherlands: Librije***”