Hotel de l’Europe is one of the best known luxury hotels in Amsterdam, located by the Amstel river. Since a few years a new restaurant has opened in the hotel, called Bord’Eau with a nice wordplay on the location as well as the famous wine region. We’ve had dinner there when it had recently opened and really enjoyed it. Meanwhile they have gotten their first Michelin star, so it was time to pay another visit. Photos taken with my iPhone.

The amuses bouche at Bord’Eau are one of their best features. I don’t remember what was in these crunchy rolls stuffed with Oosterschelde lobster, but I do remember they were absolutely delicious. 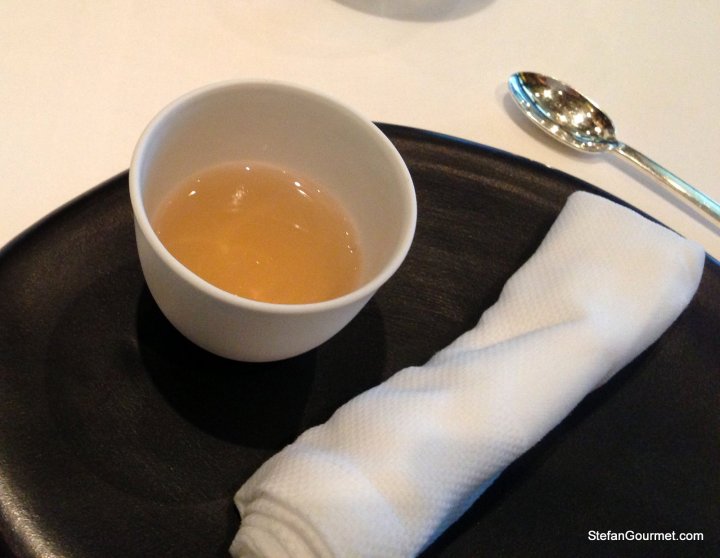 Apart from a sommelier there is a also a tea specialist at Bord’Eau, and tea was served with the meal twice.

These green olives with vanilla had a very nice mellow flavor and texture. 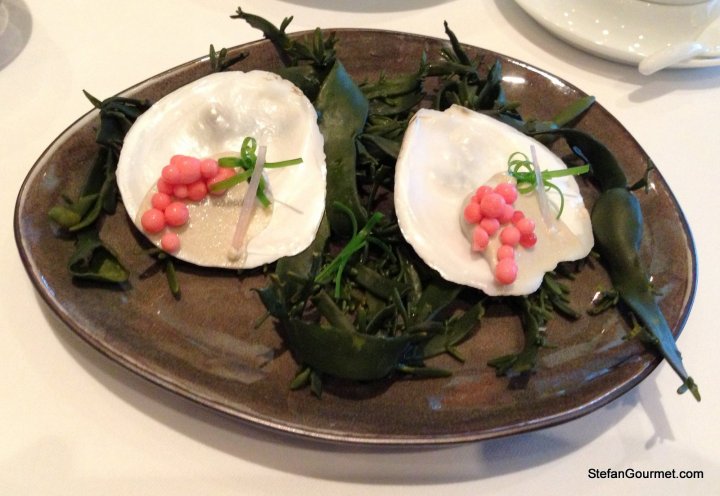 These ‘oysters with pearls’ were amazing.

Asparagus with eggs and ham are a classic Dutch combination. These egg shells were stuffed with even more and were delicious.

The final amuse bouche: beetroot roasted in salt with mustard ice cream. A good combination with a lot of flavor. This one of the best sets of amuse bouche I’ve had in terms of flavor, and in the end that’s what’s the most important. 10/10!

There is an à la carte menu, and a set menu of four, five, or six courses. We opted for six courses (96 euros) with matching wines (78 euros). My friend didn’t care for the Spanish prawn and it was no problem to substitute with something else.

The first course is the chef’s signature dish: season’s vegetables with rice cous cous, pierre robert (cheese) cream and pistacchio oil. Paired well with a Swiss white made from (red) merlot grapes. The wine really brought out the cheese and the salad had a great texture. 9/10 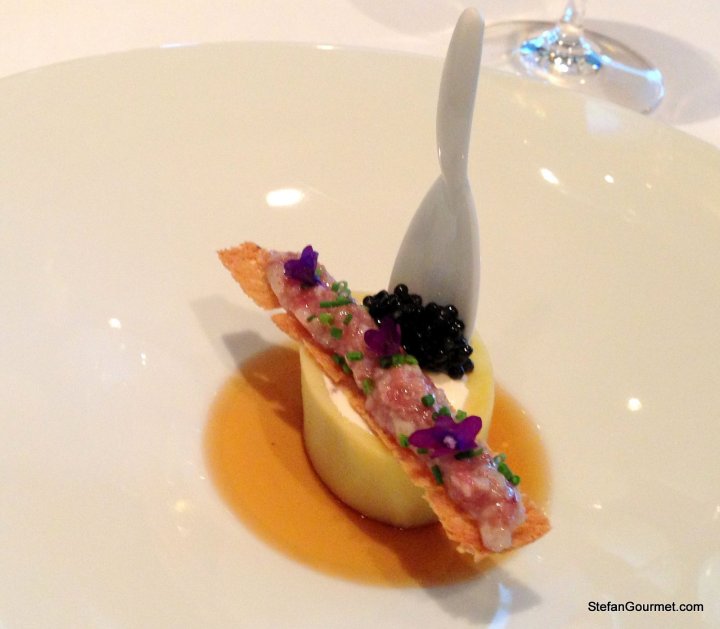 Tartare of Lozère veal with caviar, and a ‘bone’ made from potato. Wonderful presentation, flavors, and textures. Paired well with an Australian sauvignon-semillon. 9/10

Spanish prawn with grapes, almonds, and ‘ajo blanco’. The Ajo blanco was a garlic soup that had a delicious very full garlic flavor without being too strong. The prawn was perfectly cooked and not overpowered by the ajo blanco. The dish was appropriately paired with a Spanish white with quite a bit of new oak. 9/10 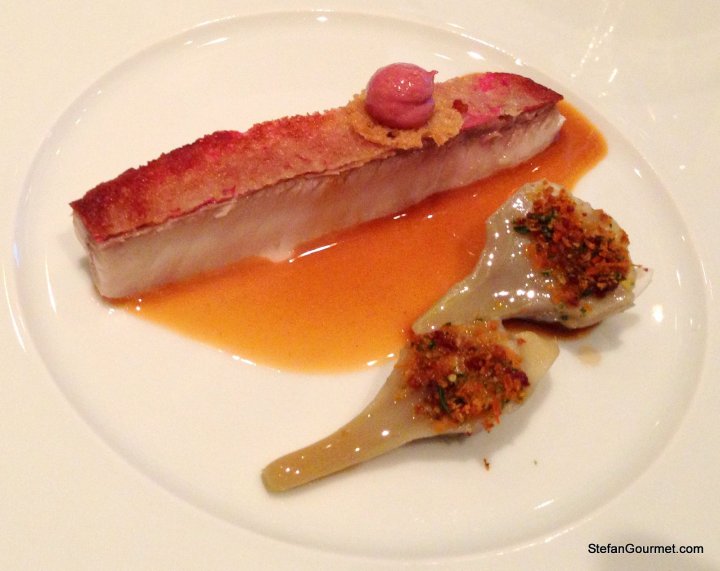 Red mullet with a ‘jus à Bécasse’, artichokes ‘à la barigouie’ with breadcrumbs. The mullet was perfectly cooked (probably sous-vide) with the mullet’s liver on top. The crispy skin had been cooked separtely. The mullet’s liver was also used to fortify the sauce. Great flavors and textures, paired with a St. Aubin that was perhaps a bit too oaky. 9/10

The aged tea served with the mullet had a smoky scent, even though it wasn’t in fact smoked. It complemented the dish nicely. 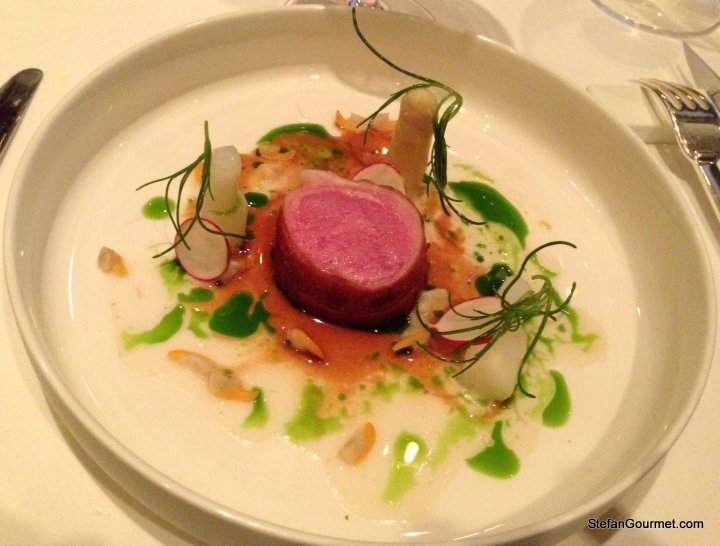 Lam’s saddle with asparagus and a sauce with ‘bear’s garlic’ (daslook in Dutch) and cockles. Since the lamb was from the Dutch island of Texel, the cockles were an appropriate touch that worked well with the lamb. The sauce was amazing, and paired well with the spätburgunder from Germany. The lamb was tender and perfectly medium rare, again probably cooked sous-vide. This dish would have been even better if the fat had been rendered just a bit more from the lamb belly that was wrapped around the saddle, thus making it more crispy. 9/10 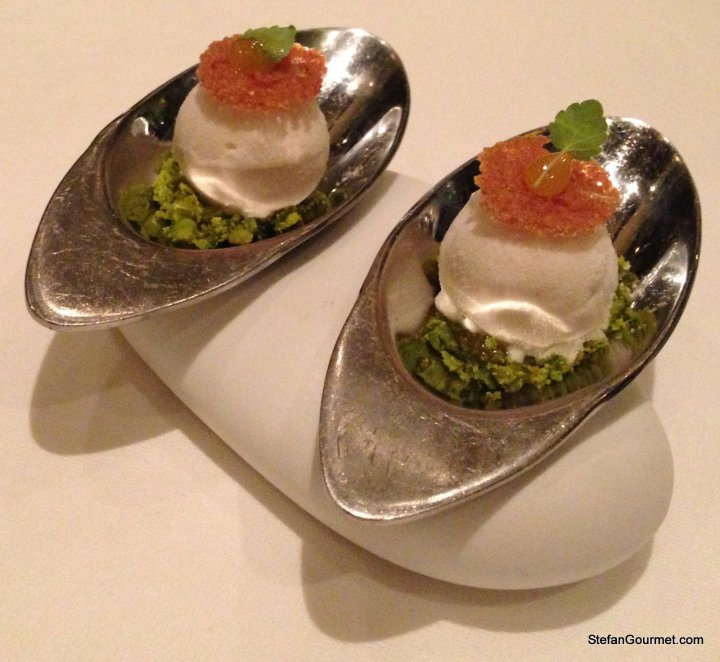 I don’t remember exactly what was in this palate cleanser, but I do remember that it was delicious and did a good job of palate cleansing.

The dessert with coconut, lime, champagne, yogurt and white chocolate was really good, and was paired adequately with moscato d’asti. 9/10

The sweets with the coffee were served on a bed of wheat grass. It looks nice, but the sweets were just that: sweet. This is the only time during the whole evening where form was more important than substance (i.e. flavor).

The service was very friendly and effective. They took their time to talk with us about the food and wine, and gave us some nice samples like a 2002 Sancerre with some goat cheese and chocolate ice cream with roquefort crumbles. 8.5/10 The food was very good. Few restaurants serve such a consistent high level. 9/10. Great wines, paired well. 9/10

I wonder when chef Richard van Oostenbrugge will get his well-deserved second star. We’ll be back!

11 thoughts on “Dining in Amsterdam: Bord’Eau*”