My friend Melvin taught me how to make this dessert from Indonesia. They look great and when you bite into them, there is a nice surprise of melted palm sugar inside.

First a dough is made of glutinous rice flour, a pinch of salt and water mixed with pandan paste (for the nice green color and enhancing the rice flavor). Then little balls are made and stuffed with chopped palm sugar. The balls are cooked in simmering water and like gnocchi they are done about 30 seconds after they start floating. The balls are then rolled in dessicated coconut that is steamed first to soften it and release the flavor.

These klepon were served as the dessert of the Asian-themed food & wine evenings I’ve been organizing lately. I’ve been quite busy with those, which is why I had less time left to be cooking other stuff and blogging about it. The Asian dinners also include homemade sushi,  thai fish cakes, thai green curry with shrimp, Japanese chicken loaf with ginger and eggplant, babi pangang, and rendang. These were paired with different wines. I will write more about this soon. But first here’s how to make klepon.

There are a few things to remember when making klepon. First, it is better to use a block of palm sugar rather than granulated. When using granulated sugar, there will be less sugar in each klepon and the balance between the sticky rice and the sweetness will be off. Second, the amount of liquid is approximate. The dough should be smooth so it won’t tear, but not too sticky either. Third, and most importantly, klepon have to be cooked soon after they are made. Otherwise, the moisture from the dough will melt the sugar and the sugar will leak out. (I have learned that the hard way.) Fourth, steaming the coconut is optional. Fifth, klepon are best when the outside has cooled a bit but the sugar inside is still warm. If you eat them too soon, the sugar inside will be burning hot.

Add a teaspoon or so of the pandan paste to the water and stir to mix.

Put the rice flour in a bowl and add a pinch of salt.

Slowly add the green water to the rice flour while you stir with a spoon. 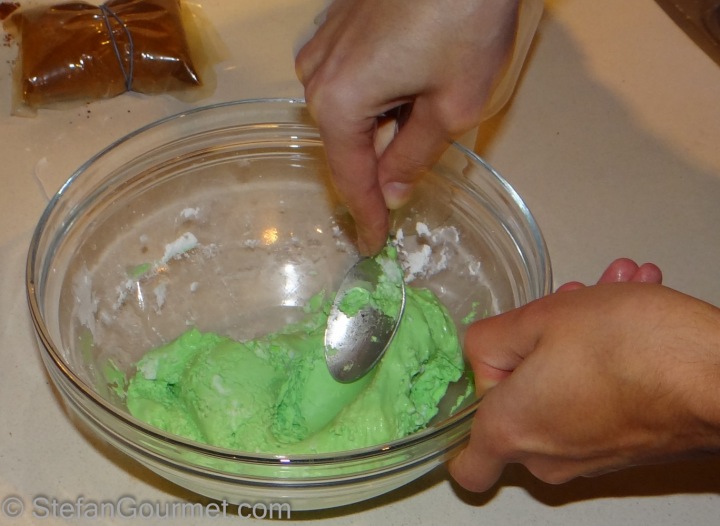 Keep adding water and stirring until the dough comes together. 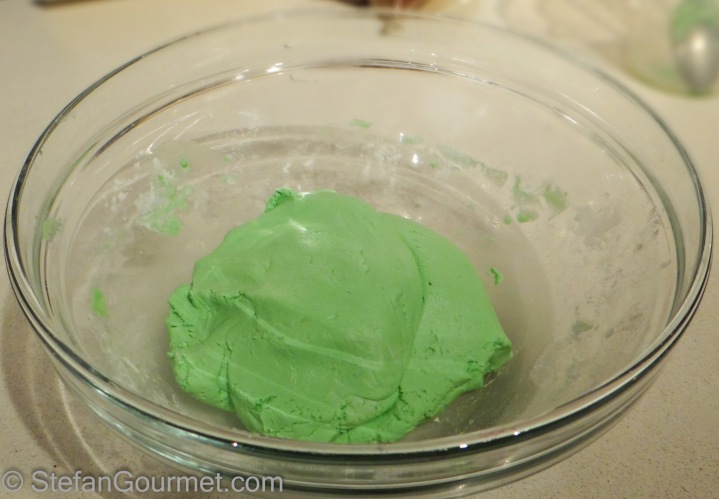 The dough should be smooth and pliable.

Take about a tablespoon of the dough and roll it into a ball with your hands.

Put your finger into the ball to make an indentation.

Put about 1/2 teaspoon of chopped palm sugar in it.

Carefully close it (so the dough won’t break) and roll it until you have a ball again. If the dough breaks all the time, you may have to add a bit more water to the dough, or use a bit less palm sugar sugar.

Repeat until you have used up all of the dough. Arrange the klepon on a surface sprinkled with rice flour to prevent sticking.

Steam the dessicated grated coconut for about 5 minutes to soften it and make it stick better.

Bring a pan of water to a boil, lower the heat to a gentle boil, and drop in the klepon. 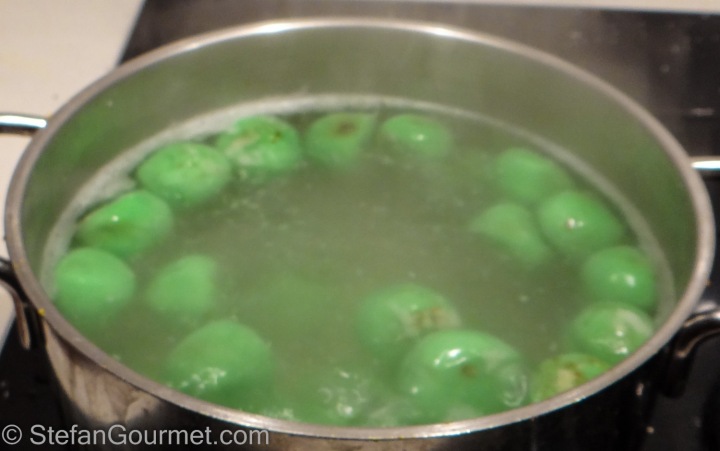 Cook them until they start to float. Then cook them for about 30 seconds longer.

Once the klepon are done, take them out of the simmering water with a slotted spoon…

…and transfer them to the steamed coconut. 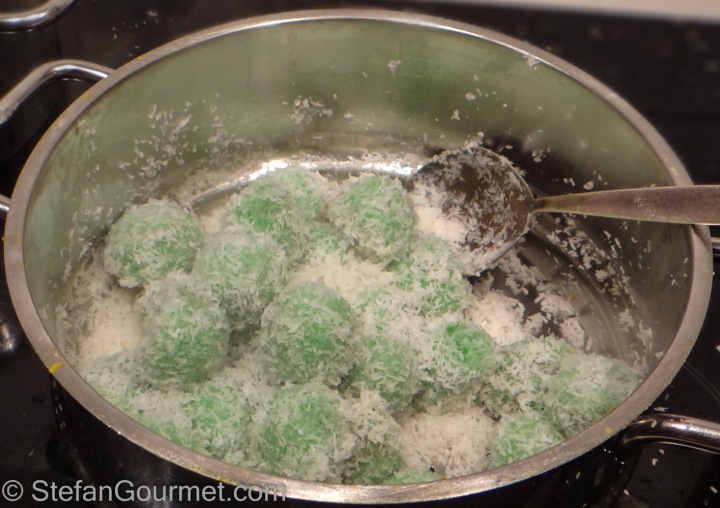 Carefully stir the klepon to cover them completely with coconut.

Allow them to cool a bit before serving.

We’ve tried these with Sauternes, Vin Santo, Moscato d’Asti and Mosel Riesling Spätlese. The Sauternes and Vin Santo were a bit too strong for the delicate flavor of the klepon. The Moscato d’Asti was a bit too fresh. The Spätlese was nice as it was not as sweet as the others, but still not a match made in heaven. I’ll keep trying other wines and will update this page when I find a better match.

Note added August 20, 2022: I’ve finally found a wine that pairs very well with klepon! It’s Verduzzo Friulano, also known as Ramandolo DOCG, a dessert wine from dried grapes of the Verduzzo variety from the North-Eastern region of Friuli in Italy. This wine has caramel notes from the aging in oak that goes well with the Indonesian caramelized palm sugar, and has just the right sweetness.

This banana ice cream is very easy to make if you have an ice maker, and so delicious. Unlike most other ice cream recipes, it does not require you to make a custard. Simply puree the bananas with sugar and cream in the food processor, with a bit of lemon juice and vanilla for additional flavor. The banana flavor is out of this world, and much better than anything store-bought.