Fresh homemade bread is so much better than store-bought, unless you are happy enough to live near an artisanal bakery that bakes bread several times a day. As we both eat at the office on weekdays, I usually only bake bread once or twice a week: multi-grain bread for the weekend, and white Italian bread for a dinner party with company. When I am cooking for a dinner party, it is no trouble to make the dough with my stand mixer, allow it to rise, and then bake the bread in the oven. Fresh homemade bread takes a dinner party to the next level. If only because everyone can smell it when they enter.

I like to have fresh multi-grain bread for breakfast in the weekend. For a dinner party it is important to bake the bread in the oven so it will look nice, but for personal use a breadmaker is a great help so you don’t have to work and wait before you can eat. The night before you put all the ingredients into the breadmaker, you set the timer, and the next morning fresh bread is ready at the scheduled time. If you have a good breadmaker such as Panasonic and you use good flour and a good recipe, the bread will be very good. Except for the rectangular shape and the hole in the bottom, but who cares?

This has been my bread routine for several years. But then something changed, because I switched from commercial fresh yeast to using my own sourdough starter. I have been maintaining it for 8 months by now and I really like the bread. However, the breadmaker does not have a program for sourdough bread. So at first I kept making multi-grain bread using commercial yeast. But then I did some experiments and found out that I could get good sourdough bread out of my breadmaker!  This bread has great flavor and is all natural because the ingredients of this bread are only flour, water, and salt (considering that sourdough is made from flour and water as well). The bread is more compact than bread from commercial yeast, but it is certainly no ‘brick’, nor is it too dense or too sour. The only drawback is that the top of the bread isn’t browned as nicely, but the crust is excellent anyway. So again, as bread from a breadmaker is for personal use anyway, who cares?

So how to make sourdough bread in a breadmaker? The trick is to mix the dough about 12 hours before the bread should be finished, and then use the timer to allow it to rise before the regular baking program of the breadmaker begins. Use a program with a long proofing time. It depends on your breadmaker whether this will work for you too. On my Panasonic, I use the ‘French bread’ program. It takes me about 15 minutes altogether to refresh the starter and prep the dough for the breadmaker (including waiting while the stand mixer is kneading), and it is well worth the effort. 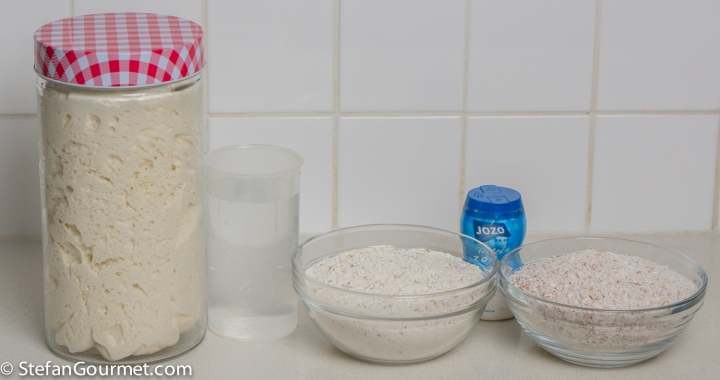 For refreshing the starter

Mix the dough about 12 hours before the bread should be finished (i.e. the night before). If you don’t own a stand mixer, you could use the ‘pizza dough’ program on the breadmaker to mix the dough. I use my standmixer. First I put 300 grams of sourdough starter in the bowl. 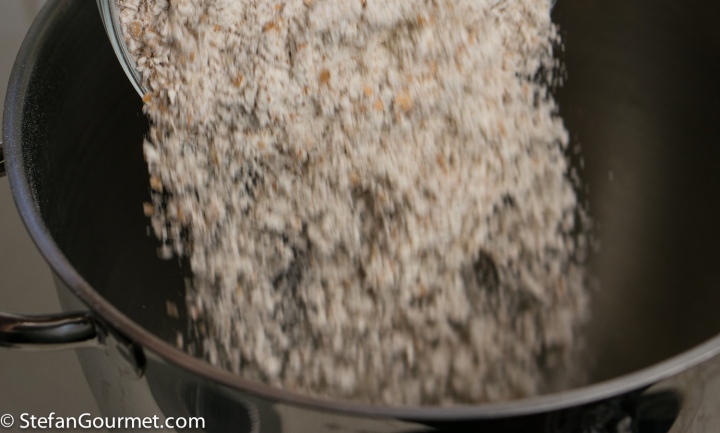 Then I add 200 grams of wholemeal flour…

…and 175 grams of multigrain flour… 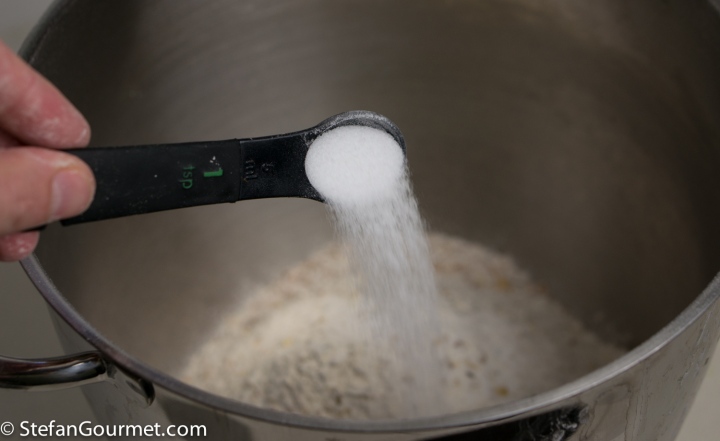 …and 2 teaspoons of salt…

Then I fit the stand mixer with the paddle attachment… 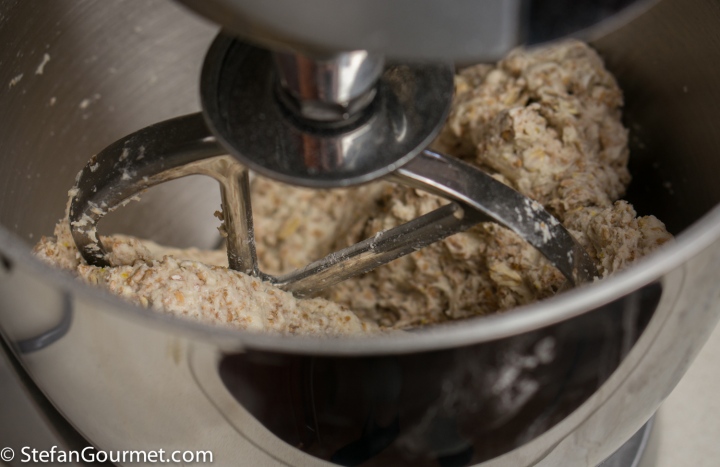 …and I allow the machine to run until the dough comes together. I start on slow speed (so the flour doesn’t go everywhere) and then increase to medium-slow speed. 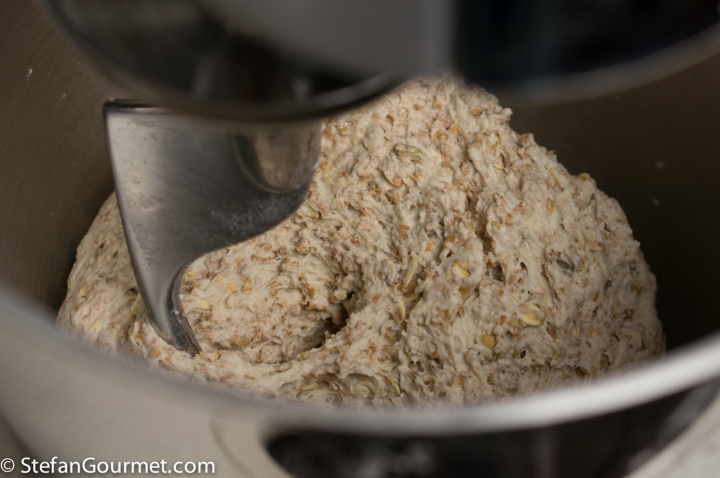 When the dough has come together, I switch over to the dough hook and knead the dough for 5-10 minutes until it is smooth and elastic.

I then transfer the dough to the pan of the breadmaker. 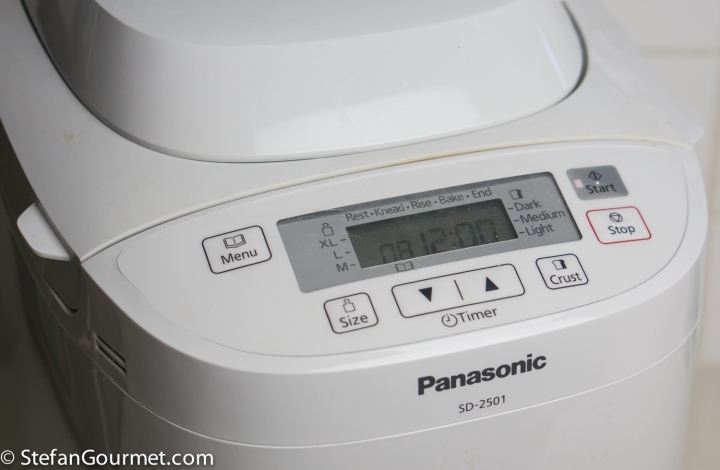 I select the ‘French bread’ program and set the timer for 12 hours.

Before I went to sleep, I checked and could see that the dough was already rising. 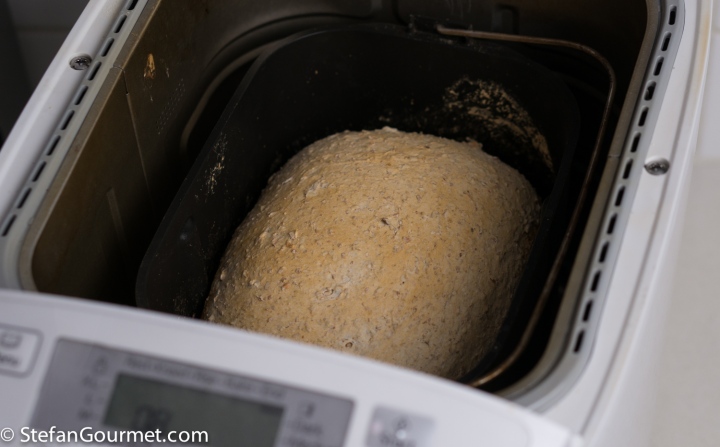 The following morning, the bread was ready.

Allow the bread to cool on a rack for at least half an hour before cutting it.

As the bread is all-natural, it is best on the same day. 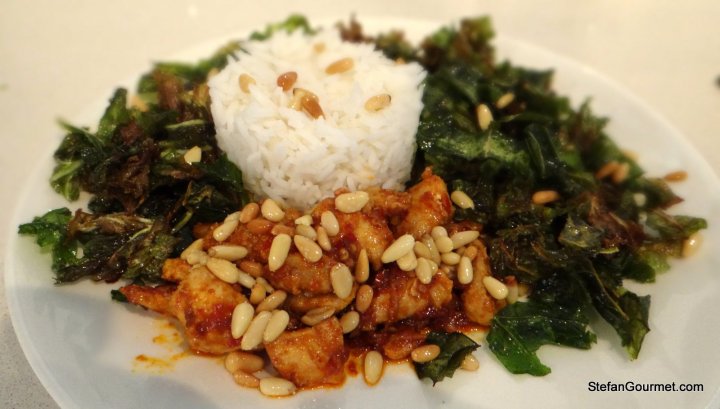 Two years ago the International Shanghai Chicken project was inspired by Clayton. Several bloggers created dishes based on one of his favorite dishes, chicken with sambal, pine nuts and crispy deep-fried chinese cabbage.

21 thoughts on “Multi-Grain Sourdough Bread Made in a Breadmaker”