Agli Amici is a two-star restaurant in the village of Godia, just outside of Udine in the Italian region Friuli. It is run by a brother a sister: he is the chef, she is the sommelier and maitre. When we arrived, the annual Festa delle Patate (potato harvest party) was going on in a big tent next to the restaurant.

The aperitif was served outside in the nice garden (although in our case the music coming from the large tent right next to the garden was hard to ignore). With a nice spumante from Friuli there were many nice bites including some prosciutto from nearby San Daniele. The bites were really tasty and original, for instance Impepata di Cozze (mussels with black pepper) in a sphere and a crunchy version of Pasta alla Norma (with eggplant and tomato). 9/10

Besides à la carte there are two tasting menus: “Storia e Cuore” (History and Heart, with more traditional flavors, 6 courses for 80 euros) and “Nuovo e Indimenticabile” (New and Unforgettable, 9 courses for 90 euros). We opted for the latter. For wine pairings three levels are offered: Friuli for 40 euros, Italy for 48 euros and ‘rarities and magnum’ for 55 euros. We explained that we would like to try wines from the region as we would like to get to know the wines from the region, but that in the end a good wine pairing is more important so that she should feel free to offer us something from out of the region if that would provide a better wine pairing. I don’t think she understood what I meant, and later it became clear that we have a different opinion of what constitutes a wine pairing…

First course: pasta made from durum wheat and red onion with fermented milk, caviar, and oysters. Paired with a Ribolla Gialla, one of the white grapes from Friuli. The wine brought out some bitter notes in the dish that I didn’t care for. Without the wine, it was good but not spectacular. 8/10

Second course: tartare of fasolari with grapefruit. Fasolari are a type of clam from the laguna that I would have liked to taste, but unfortunately the bitterness of the grapefruit overpowered everything else. The Ribolla Gialla did not help. 6/10 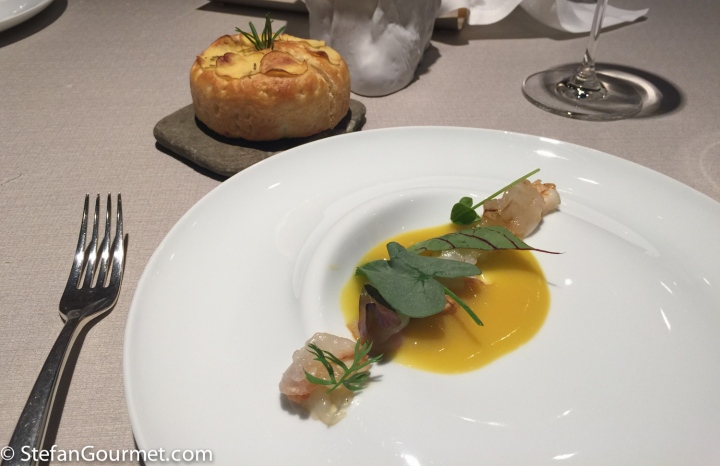 Third course: seared prawns with a peach puree and ‘strong herbs’, served with a potato brioche. The prawns were seared excellently with a nice sear but still tender and juicy, and worked well with the peach. One of the ‘strong herbs’ was way too strong, some kind of very strong mustard flavor that, unlike wasabi, didn’t go away quickly. Because of that 8/10.

We got a Pinot Bianco next to the Ribolla Gialla that clashed terribly with the sweet and tart flavor of the peach. It was a great wine by itself, but the peach ruined it. The Ribolla Gialla was not as bad, but still not a good pairing. When we mentioned this, the sommelier said “it must be the tartness of the fruit”, and walked away as if that made it OK.

Fourth course: fennel with razor clams and a creamy sauce with some lemon. Served with another white from Friuli: Vitovska. The dish didnt’ have much flavor. The wine was very interesting and didn’t clash with the dish, but didn’t really ‘work’ either. 7/10

So far we were disappointed with the food and especially the wine pairings. This is not what we were expecting of what is supposed to be the best restaurant in Friuli with two Michelin stars. At many restaurants, the antipasti are the best. Luckily this was not the case at Agli Amici. 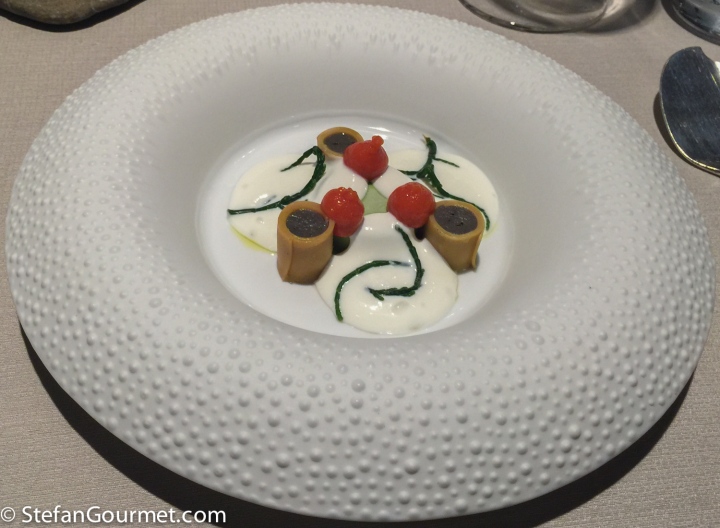 Sixth course: ravioli with greens from the fields with cream of Grana Padano and chicken stock with lavender, paired with a Chardonnay from Friuli. The ravioli and the cheese were very nice together. The chicken stock was flavorful, although we couldn’t make out the lavender. 8/10 The Chardonnay brought out the bitter notes in the greens. 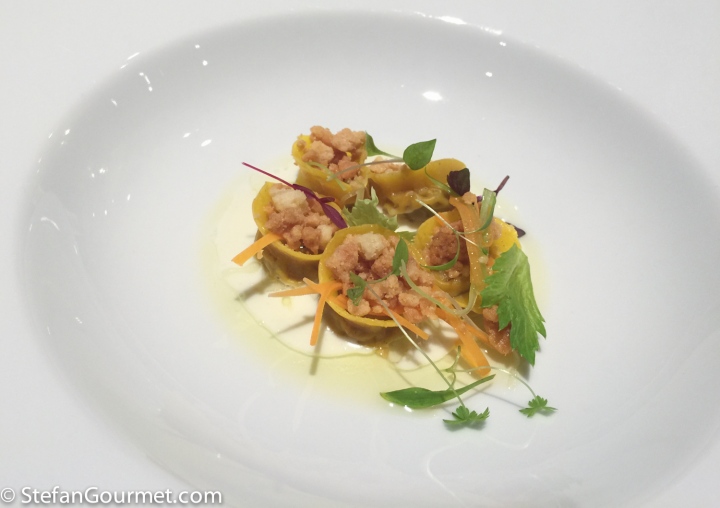 The chef came to our table and brought us an extra dish ‘on the house’ because the message had reached him that our dinner was not what we had expected. This modern take on pasta al ragù was very nice indeed. It was like open-faced ravioli with crunchy crumbles that had all the flavor of a good ragù. 9/10

We also got a glass of a white from Damijan, a famous producer from Friuli, on the house. Unfortunately it did not pair well with the dish at all. It was a very nice wine, but the dish made it taste flat. 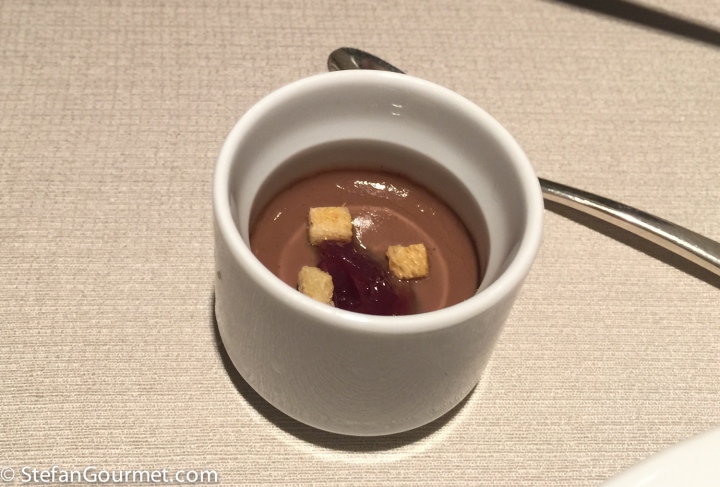 It was served with a cream of the liver of the pigeon. A nice dish, that paired okay with a Merlot. 8/10

Kees doesn’t like pigeon, so he got the main course of the other degustation: veal with crunchy capers and anchovy powder. Basically Vitello Tonnato without the tuna. This was a very nice dish, with the veal extremely tender and flavorful. 9/10

The Merlot was too strong for this. 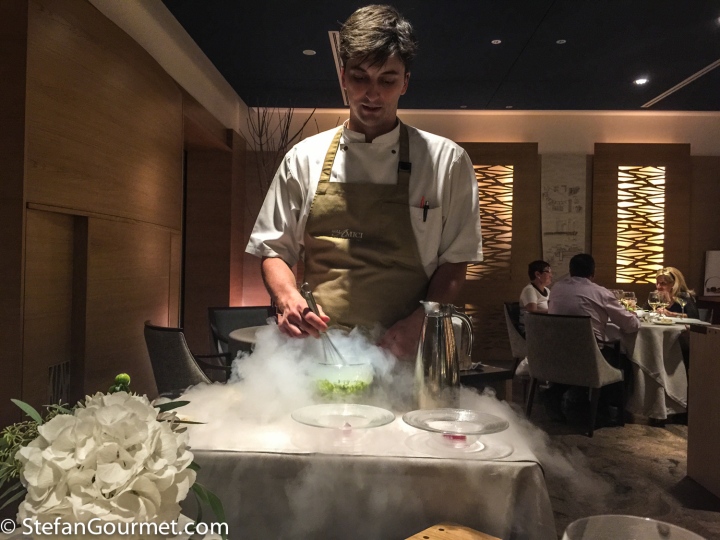 The basil ice cream for the 8th course was prepared by the table with liquid nitrogen.

The basil ice cream was served with lightly toasted pine nuts (a reference to pesto), tomato, and raspberries. A very nice dessert: 9/10. 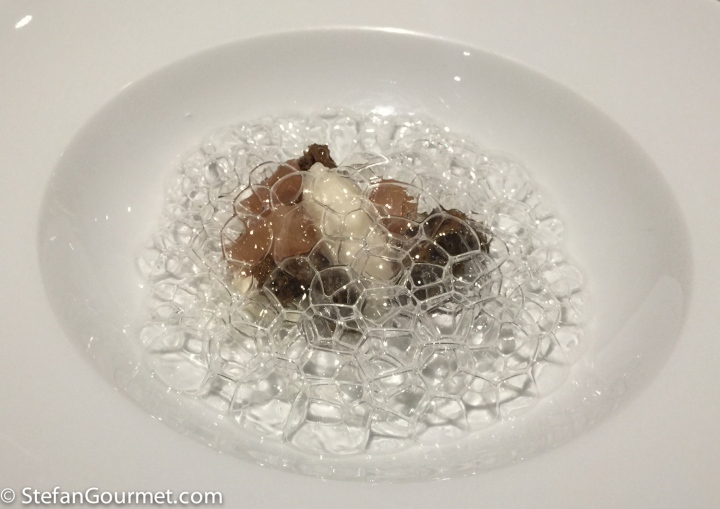 The 9th and final course: pear and coffee-flavored cake. The bubbles were a nice visual effect. Nice combination of flavors, 8/10.

Paired with a Picolit, a rare dessert wine from Friuli. The pairing didn’t really work, but it wasn’t as bad as some of the previous pairings.

Very nice the small pastries that were served with the dessert, especially the eclairs filled with cream of Picolit. Those did pair well with the Picolit 🙂

I am glad the second half of our dinner at Agli Amici turned out a lot better than the first half. The chef knows what he’s doing. All the food is technically perfect and nicely presented. From the two dishes that we tasted of the more traditional degustation, it may be that we would have been better off by choosing that menu instead. At restaurants like Laite the dishes are elevated to a next level because of the good wine pairings. Here the exact opposite happens. 8/10 for the food.

For me, the wine is as important as the food, and true magic only happens if both work together. The food should make the wine taste better, and vice versa. This concept is unknown at Agli Amici. What is listed on the menu as abbinamento (i.e. pairing), is a collection of good wines that seem to have been selected without actually tasting them together with the food. At a restaurant with 2 Michelin stars that is unforgivable. 9/10 for the quality of the wines, but 5/10 for the wine pairings.

The service was good, except for the service of the wine. In many cases, the food was served when the next wine had not been served yet. Or in other cases, we were supposed to keep drinking the same wine as with the previous dish, but our glasses were empty and not refilled by the server who brought the food. In a few cases, I was very close to grabbing the bottle myself (which was left on the table, but only for the intention of showing the bottle). The wine was served in very small pours, which is fine as long as they are refilled promptly. Which was not the case. When the extra dish ‘on the house’ came, the wine for the course after that had been served first, and then the wine ‘on the house’ came when we had already started eating. So clearly the co-ordination between the kitchen and the sommelier could be improved. Other than that, the service was very good so I am still scoring 8/10 for the service.