Azurmendi is a restaurant in a futuristic building by the freeway near Bilbao in the Basque country in Spain. The restaurant of chef Eneko Atxa has three Michelin stars and ranks highly on the World’s 50 best restaurants and Opinionated about dining. As we were visiting the Basque country, we couldn’t pass up the opportunity to eat here. The restaurant is mostly open for lunch (which in Spain starts late, around 1:30pm) and you can only make a reservation two months in advance. 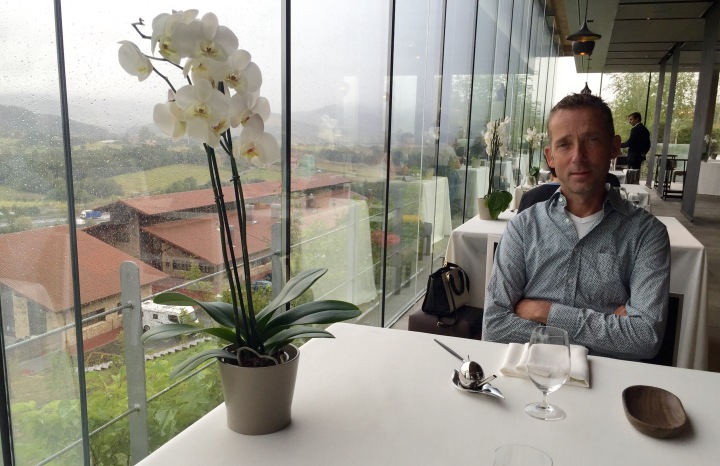 From the restaurant you have a great view on the valley below, or as in our case, on our RV in the parking lot below.

A visit to Azurmendi starts with the welcoming picnic in the greenhouse/garden entrance of the restaurant. 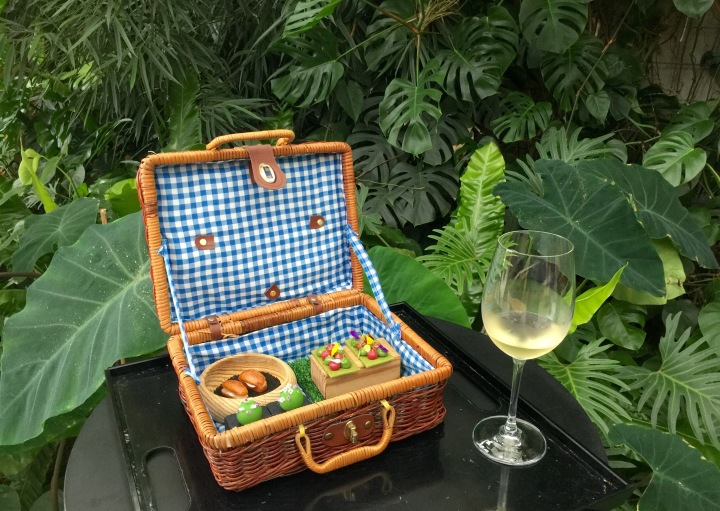 It includes a garden vegetables cake, smoked eel sandwich, and a caipirinha-inspired sphere filled with the local white wine txakoli. A glass of the latter was served with this. 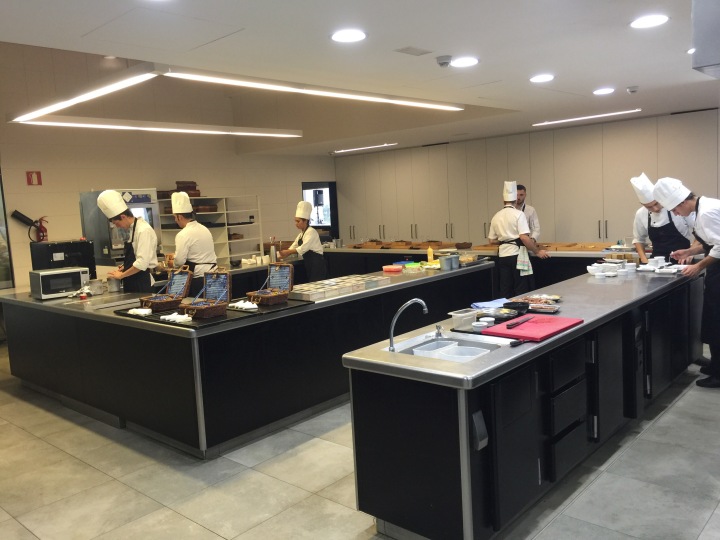 This is followed by a visit to the kitchen, where all the kitchen staff greet the guest. 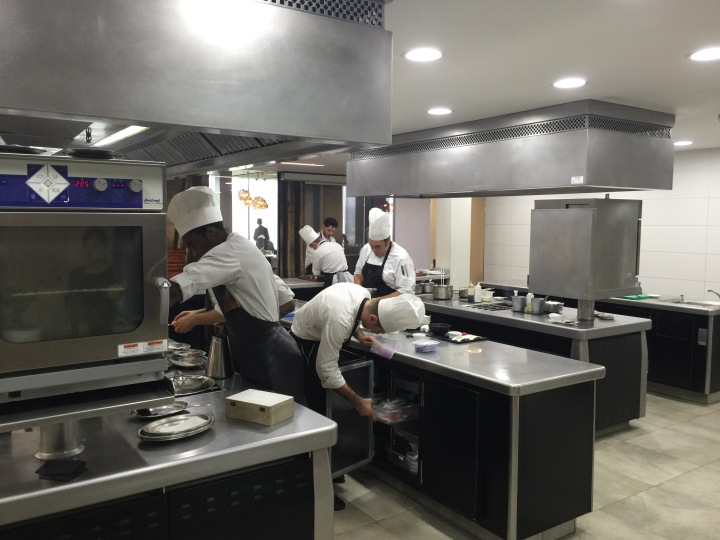 The kitchen is bustling with organized activity. 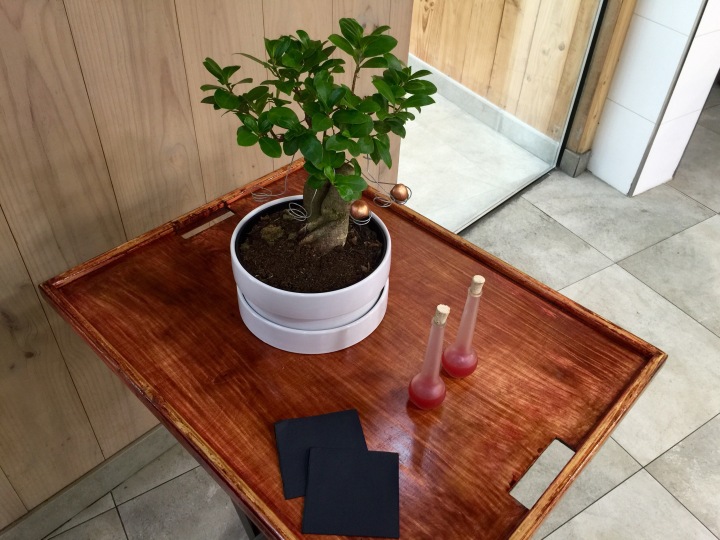 In the kitchen we got ‘hazelnuts’ with chocolate and a hibiscus infusion. 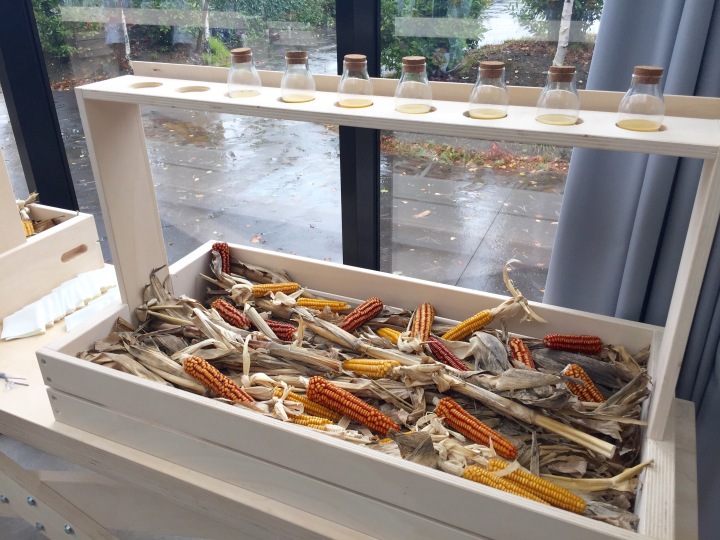 Then we continued to the greenhouse, where the first thing to sample was morokil, a local drink made from corn with a magnificent corn flavor.

…followed by asparagus ‘cotton’. The cotton was coated with white asparagus powder.

The final ‘amuse bouche’ in the greenhouse was a mushroom leaf, crispy with an intense flavor of dried porcini mushrooms.

The amuse bouche were all very nice and this was a nice way of serving them. 10/10

In the restaurant we had the choice between two menus, Erroak with 11 classic dishes (145 euros), or Adarrak with 14 seasonal dishes (175 euros). We opted for the first one; as it was our first visit it made sense to try the classics. No real wine pairing is offered, but wines by the glass are suggested that go reasonably well with the dishes (2 white, 1 red, 1 sweet).

The menu starts with frozen olive and vermouth. The ‘olive’ has an outstanding olive flavor.

Next is egg from the restaurant’s hens, cooked inside out and truffled. A nice explosion of flavors. 9/10

One of the best dishes of the menu: spider crab with emulsion and infusion of the same. An amazing strong crab flavor, without overdoing it. 10/10

Cauliflower with fried eggs and truffle. Different textures of cauliflower: roasted, a very smooth puree, spheres, and as ‘caviar’. Very nice, especially if you like cauliflower. 10/10

Roasted lobster with herbs oil and chives. The combination of lobster and chives works very well. The lobster had a nice but of roasted flavor without being overcooked. 9/10 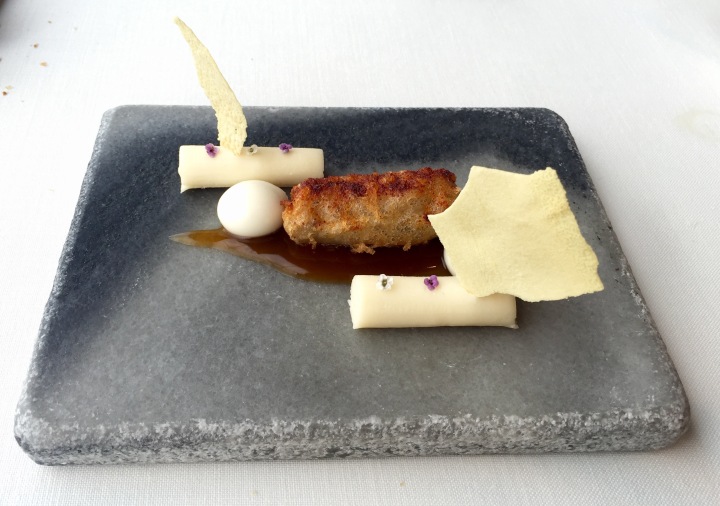 Slightly spicy fried pork with three basque cheeses in different textures: this was one of the best dishes of the menu. The pork was so tender with a wonderful crispy crust and you can’t go wrong with cheese (at least not with us). 10/10

Monkfish in iberian crust and garlic mushrooms. Monkfish wrapped in prosciutto (jamón iberico) is a classic, but it was nice to add the garlic mushrooms and the paté of monkfish liver. The monkfish itself didn’t have a lot of flavor, but was perfectly cooked. 9/10

Roasted duck with stewed wheat, apple, and granité of arugula. The ‘radish’ was the best part of this dish, and it was actually a duck foie gras ‘bon bon’. The granité worked very well to balance the heavy flavor of the duck, which was served with a hefty sauce (with soy sauce?). The duck wasn’t cooked perfectly and not as tender as I’d expect — it won’t surprise you that I’d recommend to cook it sous-vide instead. 8/10

The first dessert of yogurt, honey and five spices was nice and worked well with a late harvest txakoli (the local white grape). It had great balance of flavors and textures. 9/10 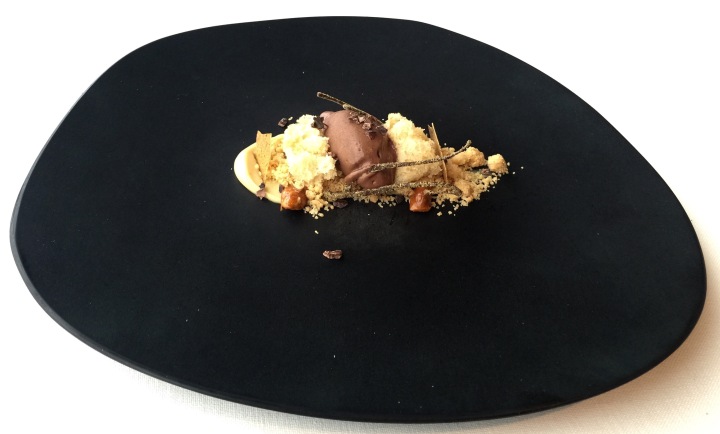 The second dessert of chocolate, peanuts and licorice was nice but not very original. 8/10

When we pointed out to the waiter that the late harvest txakoli wouldn’t work with this, he quickly came up with a Capricho de Goya (which was an excellent combination). 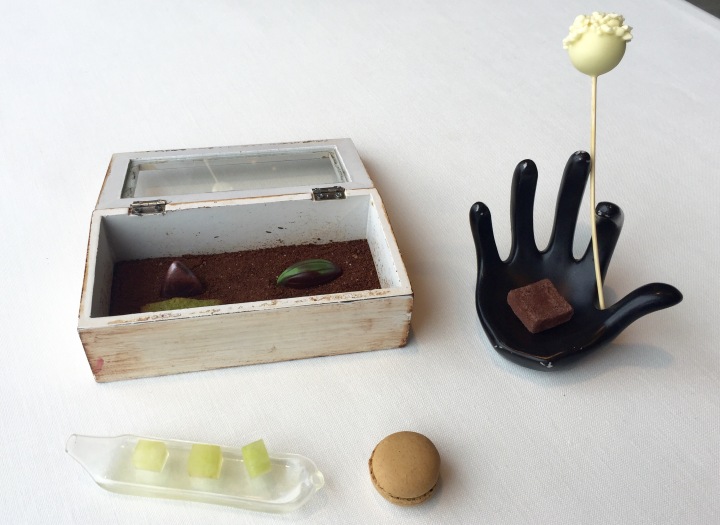 The menu ended with petit fours that were nice.

At the end of the meal the chef came around to all the tables, which is always a nice gesture.

The price/quality ratio of Azurmendi is fantastic. Because the wines by the glass are only 6 to 7 euros per glass, we ended up paying little over 400 euros for 2 including 6 glasses of wine each as well as coffee. The food is creative, beautifully presented, and delicious. 9.5/10 for the food.

The service was fine, very attentive but a bit formal. 8.5/10

I am not scoring the wine as no proper wine pairing (with a different wine for each dish) was offered. The wines by the glass that were suggested were a good compromise (a dry white txakoli made by the chef, an oaked chardonnay from Navarra, a tempranillo, cabernet and syrah blend from Ribera del Duero, and a late harvest txakoli, to which on our initiative a fortified moscatel was added) and great value.

Azurmendi is definitely worth the high rankings and well worth visiting.