Frozen pollock or pollack (Dutch: koolvis, French: colin) is amazingly cheap. It comes in unnatural-looking rectangular blocks. At a local supermarket it is 1.75 euros for 400 grams (that is $2.37/lb). It is “frozen at sea”, which means it is caught on big ships on which it is cleaned, filleted and frozen. Pollock is so cheap because it is quite bland in flavor, so I thought it would be nice to see if I could make something tasty out of it by turning it into a ragù to serve over pasta. It was not as good as when made with fresh red mullet, but it was tasty enough and at a fraction of the cost. 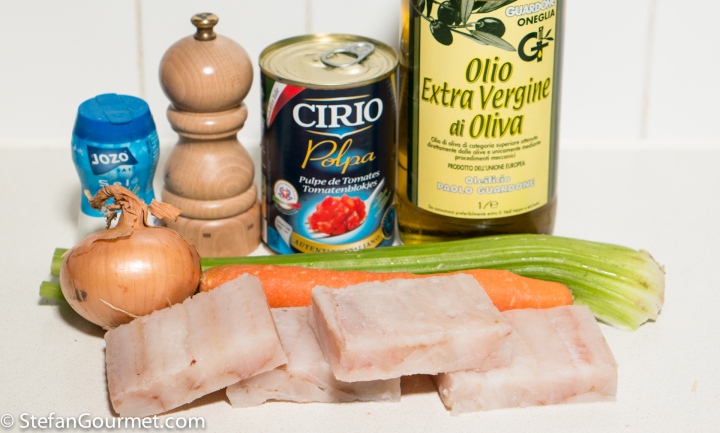 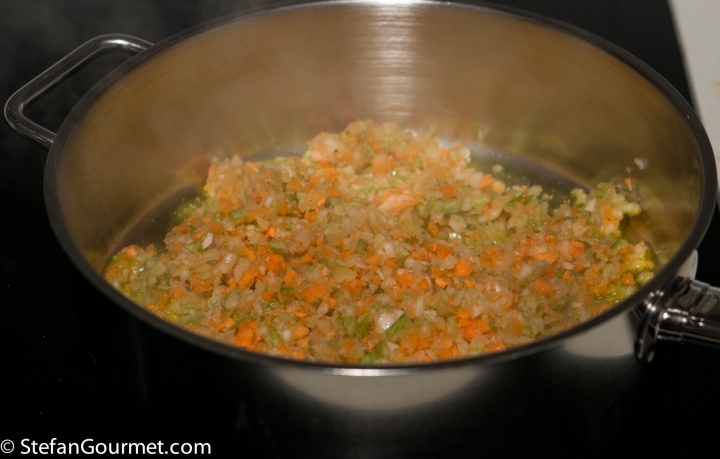 Heat 2 tablespoons olive oil in a frying pan. Add the minced holy trinity of carrot, onion, and celery, and season with salt.

Stir over medium heat until the vegetables start to turn golden.

Deglaze with some white wine (optional), and stir. 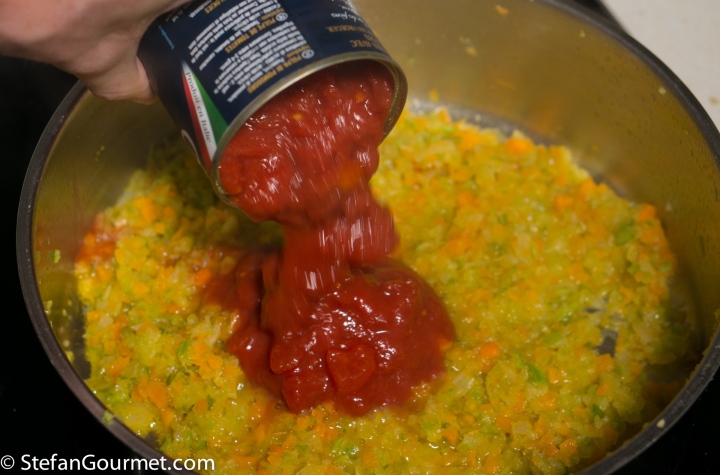 Add a can of diced tomatoes. Season with salt and freshly ground black pepper. 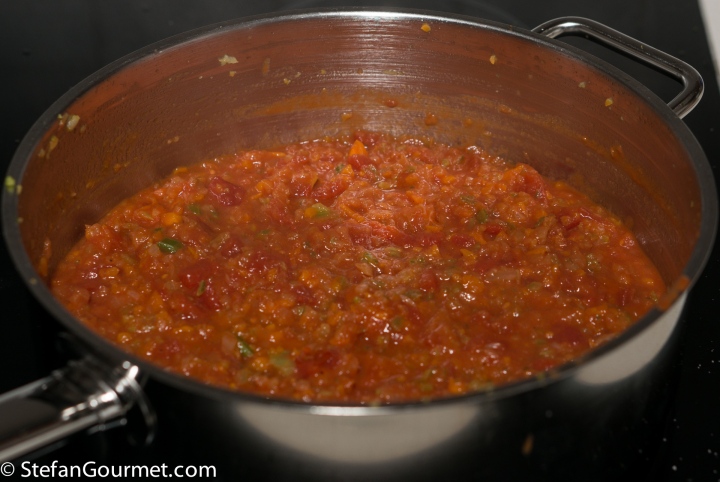 Stir and bring to a boil, then reduce the heat to a simmer.

Simmer the sauce, stirring now and then, until it is nice and thick.

Cut the fish into strips and season with salt. Allow the salt to penetrate into the fish while the sauce is cooking.

In the meantime, cook the pasta in boiling salted water until it is al dente.

When the sauce is nice and thick, taste and adjust the seasoning with salt and freshly ground black pepper. 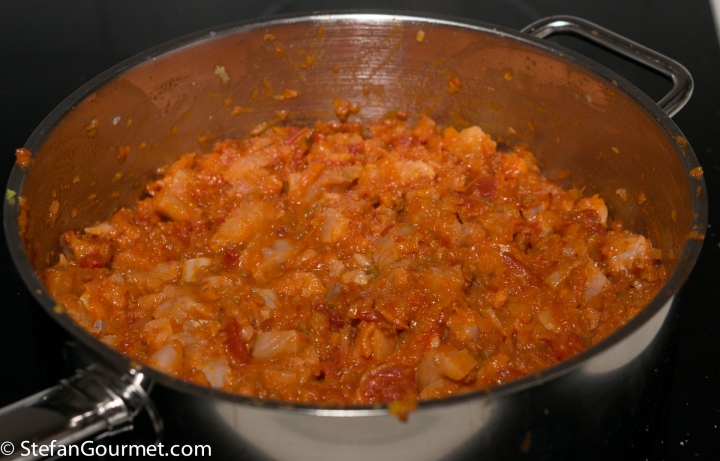 Stir to incorporate the fish. 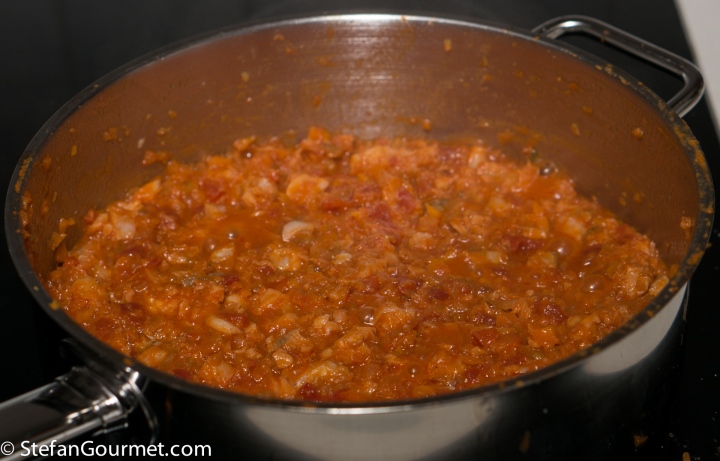 Cook for about 5 minutes over low heat, stirring gently to prevent breaking up the fish too much. 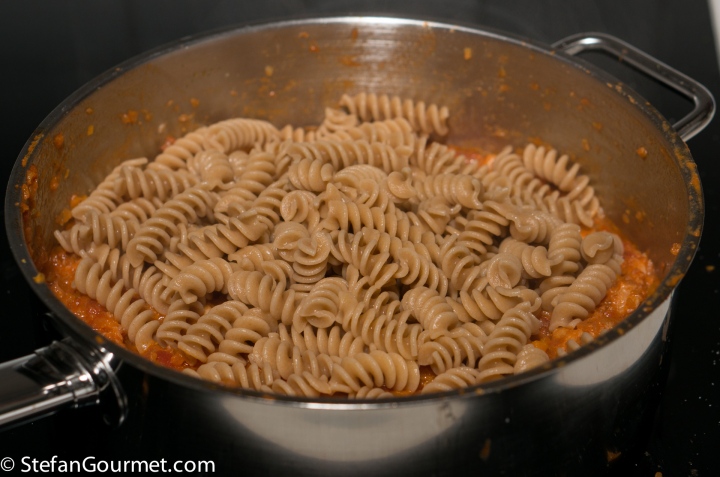 When the pasta is done, drain and add to the sauce. 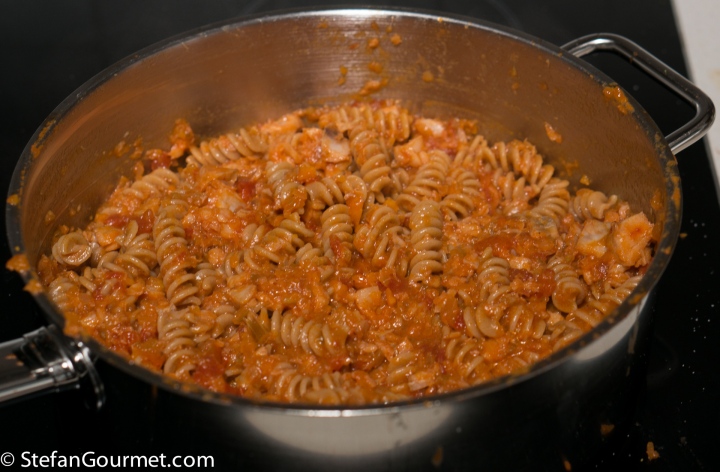 Toss until the pasta is coated with the sauce.

Serve at once on preheated plates.

When you cook octopus sous-vide, a lot of liquid is released. This liquid is very flavorful, so it would be a waste to discard it. It is perfect to make risotto. This octopus and chorizo risotto is a flavor bomb, with great depth of flavor.