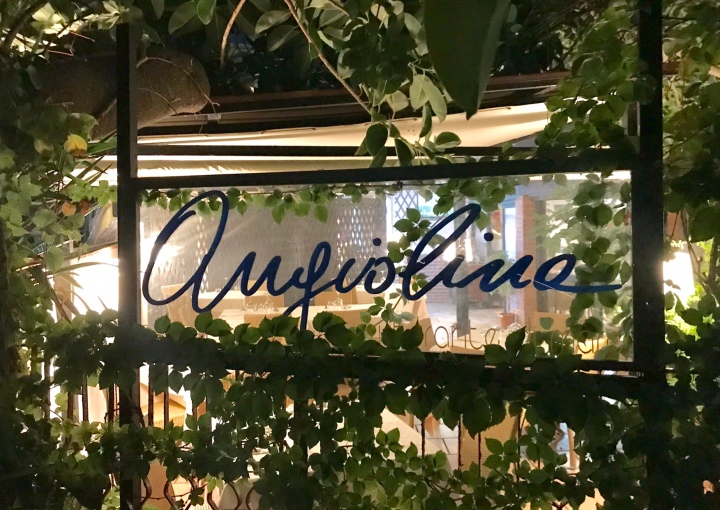 A trattoria is an Italian restaurant that is less formal than a ristorante, with lower prices and often larger portions. There is no official definition of the distinction and many trattorie call themselves ristorante, to make it more confusing. The Gambero Rosso restaurant guide awards fork ratings to restaurants (forchette), and shrimp ratings to trattorie (gamberi). In the 2018 guide there are only 25 trattorie in all of Italy with the highest rating of three shrimp (tre gamberi), and during this trip we are eating at 4 of them (on previous trips we have tried 10 that are still on the current list). Agiolina is the third after Antichi Sapori and La Locandiera. It was founded by a chef named Angiolina, who unfortunately passed away recently at the age of 96. It is her son who runs the restaurant, and there are two parts in the menu: the traditional part with Angiolina’s recipes, and a more modern part. The restaurant is located right by the sea in Pisciotta in Campania, south of Naples. The outside seating is very nice.

The menu has a large selection and everything looks good — I could easily eat here for a week and never eat the same thing twice. Many of the traditional dishes contain alici, which are large anchovies or small sardines. The kitchen is amazing at churning out the food quickly, so the service is quite fast.

From the modern menu: Briciole di frisella con ricotta di bufala e alici salate di Menaica. This is like a savory cheese cake with the crumbled frisella as the base, a very tasty buffalo ricotta, fresh tomato, and anchovies on top. Frisella is a local type of savory biscuit, and provides a nice contrast in texture with the creamy ricotta.

Ravioli with red mullet. The ravioli have been colored with squid ink and are served with a ‘ragù’ of carrot, cherry tomatoes, and a bit of celery. (On the menu it says fennel, but I think fennel is out of season here.) There are morsels of red mullet served with the ravioli, and there is also some in the filling. Fish ravioli are often dry but not here: the filling is very moist and I would even say creamy. I think there is potato and fish stock in there. 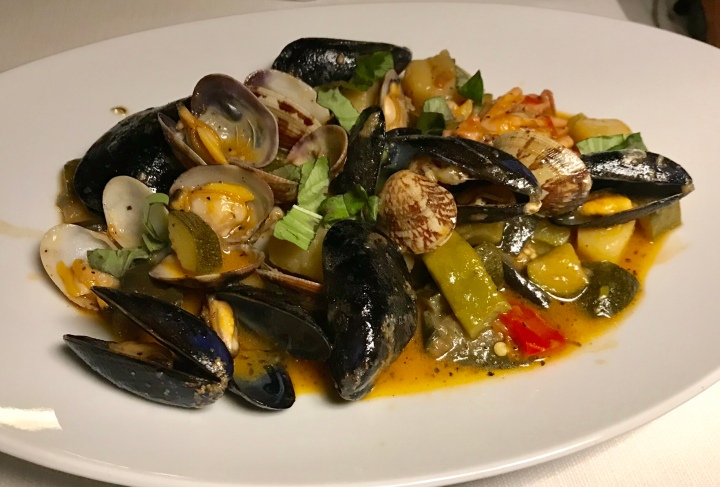 I also photographed Kees’ selection of secondo as a reminder to try this at home: Pesce alla salvia: white fish (similar to cod) in a batter of water, milk and flour, with sage on the outside, and a side of runner beans. The fish is cooked to perfection (not dry) and the sage provides a nice flavor accent.

I chose this dessert because it intrigued me: puff pastry with eggplant (!) mousse, almonds, and dark chocolate sauce. It was nice, but difficult to actually taste the eggplant.

Whenever you are near a tre gamberi trattoria, make sure you go there (and to make reservations in advance, although tonight that was not necessary as the season is rapidly ending). Trattorie with three gamberi are always good and Angiolina is no exception: very tasty food for very reasonable prices and good service. Tonight we will be dining at the fourth and last trattoria with three gamberi of this trip…

13 thoughts on “Dining in Italy: Angiolina”