With two Michelin stars and number 42 on the list of the World’s 50 best restaurants, Belcanto has the reputation to be one of the best, or even the best, restaurant in Portugal. Chef José Avillez started in 2012 and soon gained two Michelin stars. We opted for the Carousel tasting menu of 12 ‘moments’ (185 euros) and the wine pairing (120 euros, 7 different wines). This is the tasting menu with the chef’s latest creations, with all dishes from 2019 or 2020. There is also a tasting menu of the classics.

As aperitif a sparkling wine made using a second fermentation in the bottle from Bairrada, the best region in Portugal for sparkling wines, made from Pinot Noir and Chardonnay.

‘Elderini’ made from elderflower rather than Martini, with lemon foam and zest, and paprika salt. On the hand a steamed bun with cod liver and trout roe.

After Sommelier this is the second time in a row in Portugal that an aperitif of sparkling wine is suggested, but not taken into account when serving. Because the wine pairing already started with this course with a porto & tonic, with white port and lemon zest, while we were still enjoying the sparkling Bairrada.

A foie gras and port ‘full moon’, tuna belly tartar with oyster, cucumber and apple pearl, and avocado in tempura. According to the write up of the menu we received afterwards there is also kimchi and cocoa in the tempura, but those must be trace amounts as we didn’t notice them.

The pairing with the porto & tonic did not make sense to me, as it simply washed away any flavor from the dish. 8/10 for the amuses. 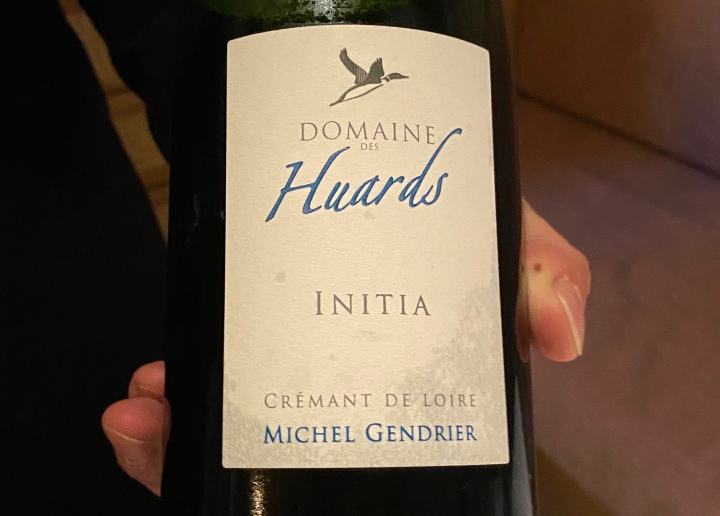 The next wine of the pairing (or really the first wine) was, surprisingly, a Crémant de Loire from Chardonnay and Pinot Noir (and thus a French wine rather than Portuguese).

I forgot to take a photo of the next dish of carrot in different textures with cashew milk. It seems that the rage of making ‘milk’ out of everything has also reached Portugal. The carrot dish was my least favorite dishes of the menu and didn’t being out the carrot flavor (6/10). 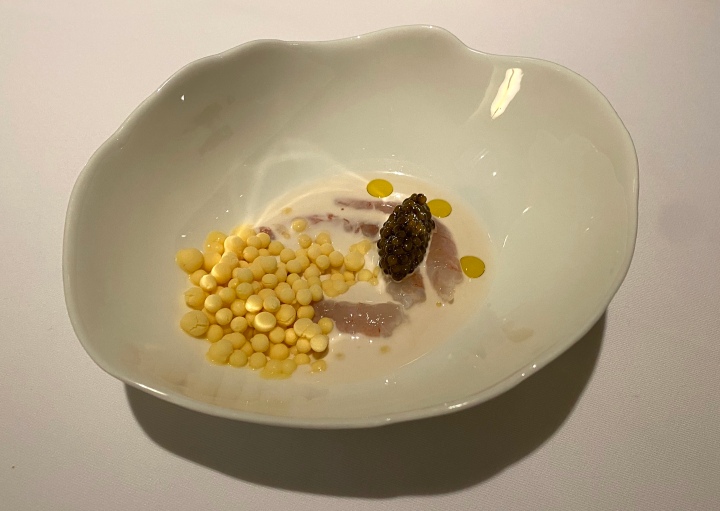 The next dish: raw prawn with pine nut milk, iced lupine and caviar. The prawns were really fresh and sweet and you can’t go wrong with caviar. The pine nut milk did not taste of pine nuts. This was paired well with the same Crémant (9/10).

The next wine was a Bical from a limestone terroir in Bairrada.

It was a good pairing for the marinated and braised sardine with roasted bell pepper, eggplant cream, and toast. This was a great combination of flavors and a fancy version of one of my favorite tapas. The ‘ash’ is mostly for decoration (9/10).

This orange wine (vinho laranja) is made close to Lisbon from Arinto, Fernão Pires, and Moscatel Graúdo. It is quite aromatic because more aromas from the skin end up in the wine due to the skin maceration. This wine was paired with two dishes.

The first is egg yolk cooked sous vide with different textures of sunchokes, smoked eel, and hazelnut butter. A very tasty dish and a good wine pairing, which is not easy with sunchokes (that are also called Jerusalem artichokes for a reason, and are as difficult to pair wines with as actual artichokes). The crunchy sunchoke provides a nice textural contrast with the creamy egg yolk.

The second is one of my favorite dishes of the evening: lobster curry with giant red shrimp, pork fat and cilantro sprouts. The balance on the sauce between lobster bisque and red curry paste is excellent, and so is the texture of the lobster. This is the most tender lobster I’ve ever had. I’m not usually a fan of pairing one wine with two dishes because it often is a comprise, but in this case the pairing was even better with this dish. 10/10

The next pairing is a sake, which makes sense because the dish uses Japanese ingredients.

The dish is sea bass (cooked sous vide) with ‘scales’ of butternut squash with Japanese soy sauce, razor clams and vongole dashi, lime zest and pumpkin seed oil. The pairing with the sake did work, although the sake did overpower the dish somewhat. 9/10

Next is the first and only red wine, a field blend from Douro of about 30 grape varieties. The wine had hefty but ripe tannins and a nice fruity character as well.

It happens quite often that the appetizers are amazing and it goes downhill from there, but not at Belcanto. After the outstanding lobster dish and very good sea bass, the meat main course of crispy suckling pig is again outstanding. I’ve had crispy suckling pig in places where it is very famous, like Sardinia, and the skin was very tough and difficult to eat. But here it is indeed crispy and almost brittle, and the best crispy suckling pig I’ve ever had. The chef calls it a crunchy suckling pig sandwich and serves it with an orange sauce. I will forgive the souffle potatoes, that were not as crispy as the pork. The orange sauce works as a good contrast with the pork, and the combination of pork and orange works very well with the wine. 10/10

It is quite customary at fine dining restaurants that your napkin is changed before dessert. Here the chef has added a nice touch by providing a napkin shaped as a sleeve, as if you are wiping your mouth with your sleeve rather than with a napkin.

The dessert wine is an Alvarinho that is made like a Spätlese Riesling with 9% alcohol and residual sugar. Alvarinho is known as the Spanish cousin of Riesling, so this is not a strange thought at all. 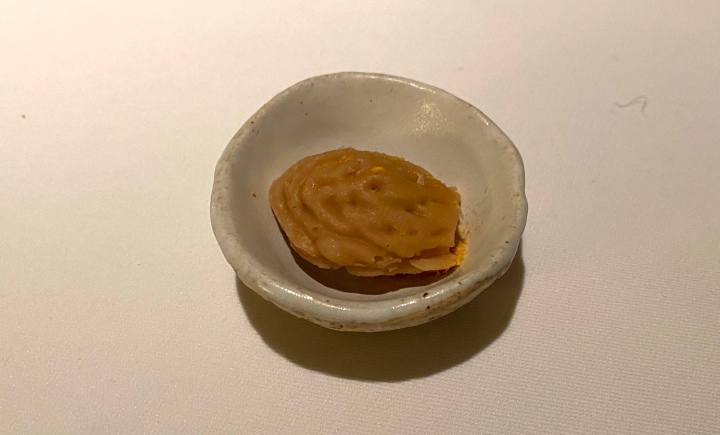 The first part of the dessert is almond paste shaped as a peach pit. Too sweet for the wine, but nice.

The second part is strawberry crunch with whipped cream, and a Nutella cherry. The wine works well with the strawberry, but not so much with the cherry. Although the cherry looks like a real cherry, in fact only the stem is real and the rest is made to look like a cherry. A show of the technical prowess of the pastry chef. 8/10

The final part of the dessert is different textures of fresh fig with tomato. This is an original dessert that works very well with the wine and really showcases the fresh fig flavor. 9/10

With coffee or tea a miniature ‘ball from Berlin’ is served, which is apparently also a popular beach snack in Portugal.

The food at Belcanto is outstanding and well worth two Michelin stars. I gladly forgive the carrot dish because of the outstanding lobster and suckling pig. In some cases I thought that parts of a dish were more about technical prowess and novelty than flavor, so not quite 10/10 but a well deserved 9.5/10 for the food. The chef clearly has enough talent for a third Michelin star and I can see why his restaurant has ended up in the world’s 50 best restaurants. The tasting menu is also reasonably priced for the amount and quality of dishes.

The wines and wine pairings are good, but the price for the wine pairing is too high for what you get. Only the red wine was expensive, but all the other wines were not fitting for a 120 euro price tag. 7 wines for 120 euros means 17 euros per glass, which is much more than I’ve paid at other restaurants for a wine pairing of this caliber. And it was certainly not compensated for by the amount of wine served, as very small servings of the wines were poured. It is nice not to be drunk after a wine pairing of 7 wines, but now we had to measure out our small sips to be able to enjoy the wine with the dish. The second serving of the orange wine was so small that we didn’t have enough to enjoy with the lobster curry and so we asked for some more. We got so little more that we were wondering how expensive the wine was. Turns out the local retail price is 15 euros per bottle, so it remains a mystery why they were so skimpy. So only 8/10 for the wine.

The service was not what I’d expect from a restaurant with two Michelin stars. On the one hand they did a lot of formal things like cleaning away bread crumbs after each course. But I’d prefer if they had been more proactive about providing wine, water, and bread. A waiter should notice a guest is running low on either of those and ask if the guest would like some more. I’ve already mentioned how skimpy they were with the wine. The service was friendly, but more in the sense of being polite than by giving us the feeling that they truly wanted to show us a great time. Only 7/10 for the service.

The food at Belcanto was so good that I’ll certainly give it a second chance next time we’re in Lisbon.

6 thoughts on “Dining in Portugal: Belcanto**”