My regular readers may have noticed that I haven’t posted for a few days. That’s because I was in Italy, to visit friends and to eat at Combal.Zero. In September we dined at Combal.Zero in Rivoli (close to Turin, Italy) for the first time and were totally impressed with the food. So much, that we wanted to go back there again soon. And so we did. Combal.Zero has two Michelin stars (I can only guess why there aren’t three), ‘tre forchette’ (3 forks) from Gambero Rosso (the highest rating from this leading Italian guide) and ranks 59 in the World’s 50 Best Restaurants (down from 28 in 2011). The restaurant is located next to the ‘castello’ in Rivoli that houses a museum. 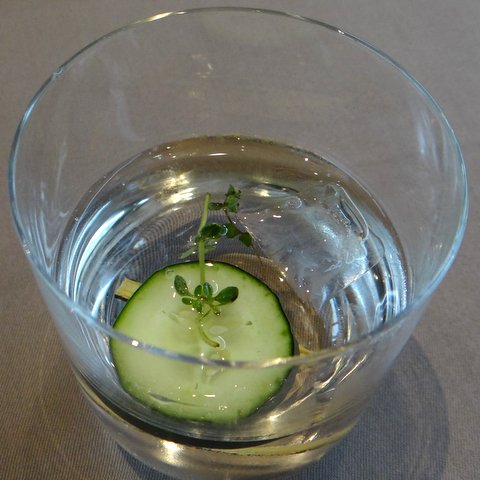 Next to the alcoholic aperitif (we had a nice rosé spumante from Piemonte made from pinot noir and chardonnay), we got this water perfumed with really good cucumber, thyme and liquorice. 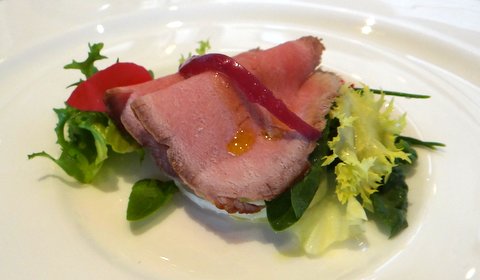 The ‘amuse bouche’ was Combal’s version of Vitello Tonnato, without mayonaise. 8/10

The ‘cyber egg’ is an egg in plastic wrap with caviar. You get a pen knife with it to open it yourself and then slurp it out. You also get a glass of very good ‘Beluga’ wodka with it. (I normally don’t like wodka, but this wodka was really good.) The taste is nice, but the complicated instructions gave me higher expectations. 7/10

The first matching wine as an unoaked viognier from Piemonte. It paired wonderfully with one of the best dishes of the night: Lobster carpaccio and gorgonzola cheese fondue, served with deepfried seaweed. The unlikely combination of raw lobster and a creamy gorgonzola sauce seems weird, but was outstanding. The seaweed was crunchy and kind of melted in your mouth to create more of a seaweed experience. 10/10

The viognier also paired well with this Eggplant tataki with tomato Combal blend (tomato unfortunately not in the picture). The eggplant had a very pleasant tender texture and it was seared on the outside. 9/10 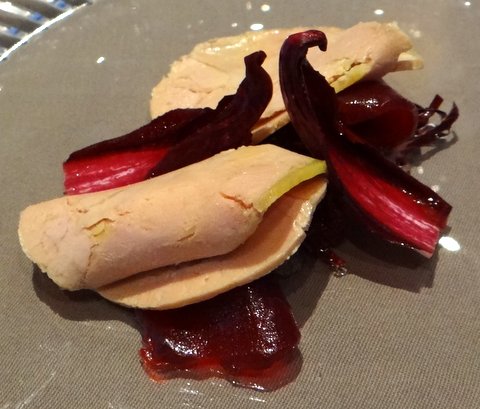 For wine we moved over to a chardonnay with a bit of an oxidized style because it was made using amphora. This went surprisingly well with the terrine of duck foie gras with taggiasche olives and beetroot. The combination of foie gras and beetroot is nice but we’ve had it better. 8/10 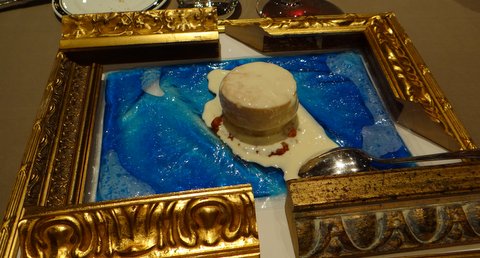 We went over to red with a nice Nebbiolo that went great with this beautifully presented maccheroni soufflé, ragù and grana padana fondue. The bolognese ragù was outstanding, and a really nice idea to combine it with a soufflé and the cheese sauce. 9/10

The next wine was outstanding, a Sicilian red from local grapes. It paired well with the veal tongue braised in barolo wine, with ratte potatoes puree. The veal tongue was extremely tender and the sauce had a great full flavor. 9/10 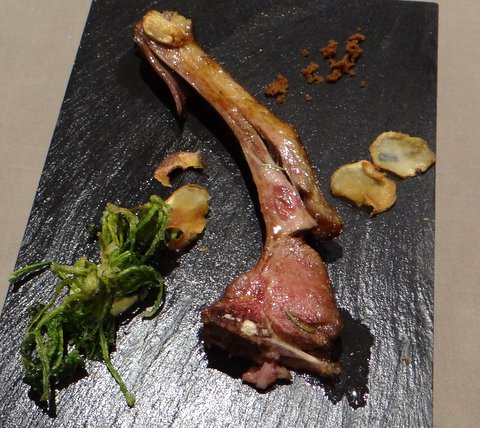 With the same wine this lamb chop, served with dehydrated spinach, porcini crisps and dehydrated lamb stock (“Roman style brodettato lamb”). We were instructed to put the crumbs of stock on the meat, and so we did. The meat was tender and had a very full flavor. 9/10

It was time for dessert. We were allowed to pick a dessert from the à la carte menu. Kees picked this ‘Grandma Duck’ cheesecake with blueberry jam.

I chose the raspberry hamburger. It came in an actual hamburger bun with sesame seeds and all and was as messy to eat as a real burger. 8/10 In front the tower with small pastries.

With restaurants it is often the same as with films. Is the sequel going to be better than the first installment? In many cases when going back to a restaurant with very high expectations, you are disappointed. We were not disappointed with this sequel, or more a prequel really since many of the dishes we had this time are ‘older’ than the ones we had in September. On the one hand the ‘official’ degustation menu we had in September had slightly more dishes with a ‘wow factor’ (I rated the food 10/10 that time) than the menu we had this time that was a bit more traditional (which I would rate 9/10). On the other hand, the service and the wine were both improved compared to our previous visit (from 8/10 to 9/10). So we are definitely coming back, especially when Davide has cooked up a completely new degustation menu!

13 thoughts on “Dining in Italy: Combal.Zero”