Paris is a 5-hour drive and it is one of our favorite cities in the world, so we like to visit once every one to two years. There is only one surprising thing that is less great about Paris: so far we’ve not been very lucky finding a restaurant there that we really liked. We tried a two-star restaurant that was good but too expensive and a bit boring, and the other restaurants we tried were all mediocre. I had had my eyes on l’Astrance for some years, but so far never managed to secure a reservation. l’Astrance has the reputation of being the most innovative three-star restaurant in Paris, as well as one of the least expensive ones (which does not mean it’s not expensive…).

Securing a reservation turns out not to be extremely difficult once you know how it works: reservations for October open up on September 1 (and similarly for other months; they are closed for vacation in August), and you can call them between 10 and 12 am or 6 and 8 pm (Paris time; apart from French they also speak English). On September 1 on 10:20 am or so I managed to get our reservation for the specific date in October that I wanted, after getting a busy signal for the first few times that I tried. They required a credit card number to secure the reservation, and they called me the day before to confirm.

l’Astrance is a small restaurant located near the Eiffel Tower. One of the reasons why it is so hard to get a reservation is that they only have a small number of tables. Chef Pascal Barbot only offers a tasting menu (210 euros), which can be expanded with matching wines (for a total of 320 euros). The menu will be the same for everyone eating there the same evening, with some minor variations (which seem to be random). There is no à la carte. Unlike most similar restaurants, a written record of what you’ve eaten is not provided. Since there is no printed menu either, I have to write this completely from memory (since I don’t take notes — only photos, with my iPhone this time).

The amuses were nice, especially the toasted brioche with sweet almond.

The menu started with the chef’s signature dish: Foie gras mariné au verjus et galette de champignons de Paris, i.e. foie gras marinated in verjus (sour grape juice) with a ‘carpaccio’ of white mushrooms. There was some hazelnut oil and a sauce with citrus on the side. This signature dish made very clear from the beginning that chef Barbot likes elegant understated flavors. Or to say it in a less complimentary way: we had to try very hard to taste anything at all in this dish. The hazelnut oil and the citrus sauce had taste, but I don’t think many people would have detected the foie gras and mushrooms in a blind tasting. 7/10

A mousse of butternut squash with coconut. Nice but not spectacular. 7/10

Another signature dish: langoustine (scampi) in a shrimp stock with ginger. The langoustine was cooked perfectly medium rare and seared on the top side. A very nice dish, but I would have preferred a stronger shrimp taste in the stock so I’m awarding 9/10. Paired well with an unusual Pouilly Fumé from Alexandre Bain, a dry wine made from late harvest sauvignon blanc.

The squid was also combined with ginger and other Asian flavors such as cilantro (coriander).

It came with a crunchy roll with peanut ‘satay’ sauce and oyster leaf. This was paired well with a Riesling from Alsace, Schlossberg Grand Cru. This pairing was spot on because a sip of the wine really brought out the oyster from the multi-flavored crunchy roll. 9/10

The steamed cod came with nice garnishes and paired OK with a Chassagne Montrachet 1er Cru with a nice oakiness but a bit out of balance (too much acidity and none of the butteriness that is so characteristic of Chassagne Montrachet). The cod was slightly overcooked and therefor a bit dry. 7/10 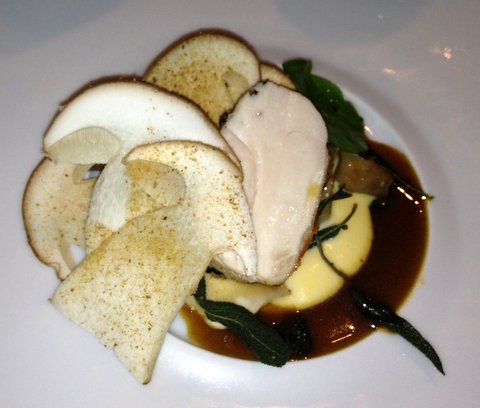 Here is where we noticed the only difference with the table next to us: they got a vegetarian course with cepes (French for porcini mushrooms) followed by a course with lamb, why we had a combined course of poularde (i.e. chicken) with cepes. The chicken was very tender and juicy and a good match with the raw, thinly sliced cepes. The taste had to come from the jus. Paired adequately with an unusual 2001 Pouilly Fuissé that had been aged for 5 years in an oak barrel and a similar amount of time in the bottle. The wine was therefore quite oxidized in style, but still had quite some power. 8/10

Duck and corn were a new combination for me, but it worked quite well. The duck was tender and cooked perfectly medium rare. The pairing with an oaked syrah was adequate. 8/10 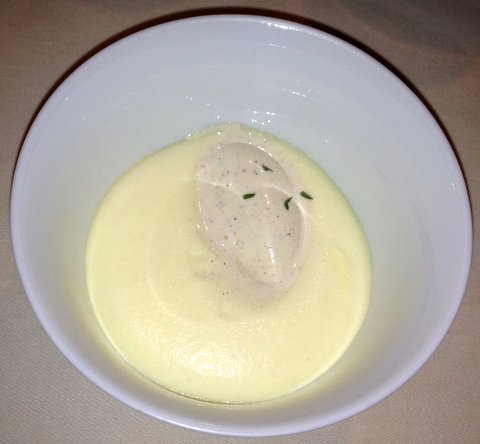 The wait staff was very fond of guessing games, but this one was too easy: as a pre-dessert we got vanilla ice cream with mashed potatoes. It tasted well together. 8/10 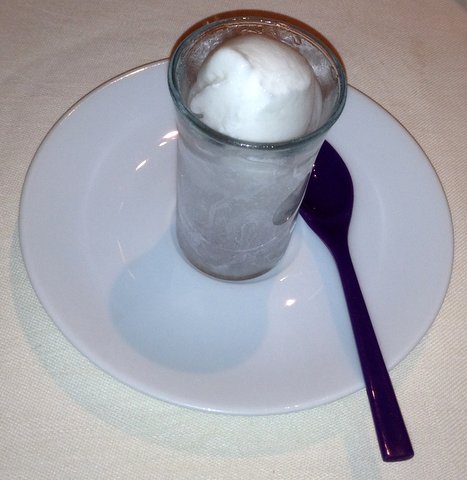 The other pre-dessert was really nice: a sorbet of ginger, hot chile pepper, and lime (if I remember correctly). Very good strong taste and very refreshing. 9/10

This citrus tart for dessert in itself was very good, but the jurançon that it was paired with was a complete disaster. The combination tasted so sour that I couldn’t keep a straight face while tasting it. The sommelier said “I understand” when we mentioned this, but didn’t seem impressed. I wonder if he has ever tasted them together. 6/10 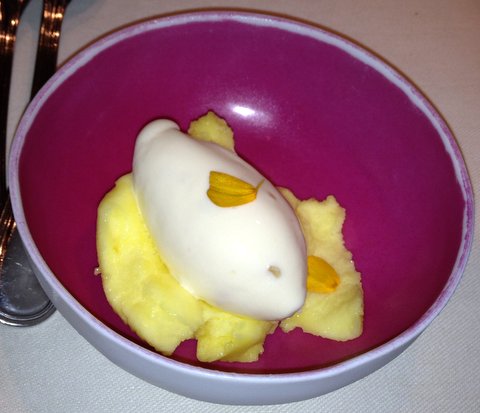 The ice cream was ginger if I remember correctly, and didn’t pair much better with the wine.

The madeleines made with honey that came with the coffee were great with a very good honey taste. 8/10 There was also some fresh fruit (grapes, apple, fresh fig).

At the end of the dinner Pascal Barbot made his rounds and talked to all the guests. He seemed like a very modest, friendly guy who clearly loves being a chef.

I don’t like it when the service is too formal, so I liked it that the servers made some jokes. The joke that they pretended not have my reservation at first was not really funny though, and I also didn’t care much for the touch of Parisian (almost proverbial) arrogance. The sommelier only explained the wines after we had finished eating a course, and expected us to play a guessing game with him (which was fine by us). He had chosen such unusual wines that this was quite hard. For instance the Chassagne Montrachet was almost impossible to guess because it is known for its butteriness.

l’Astrance is a very good restaurant and the best we’ve eaten at in Paris so far. Barbot’s style of cooking is contemporary French with some Asian fusion and very elegant understated flavors. The presentation is just as elegant and understated. At this level of cooking, one’s personal taste starts to play an important role in deciding which restaurants are better than others. With three Michelin stars and #18 on the list of the World’s 50 best restaurants, I was expecting something a bit more spectacular. I was expecting to be blown away by the taste as well as the presentation like we were at other restaurants with three stars on the list of the World’s 50 best like RyuGin, Alinea, or Librije. Or Combal.Zero and Piazza Duomo (also on the list, but with only 2 stars). And blown away we were not. So I’m scoring 8.5/10 for food.

The wines were very good and of high quality (grand cru/premier cru), which you don’t see often in a wine pairing and certainly not for this relatively reasonable price, but since the food-wine pairings were mostly just adequate with one major glitch, I’m only giving 8/10.

Even though this wasn’t bad at all, I think next time in Paris I’ll take Natasha’s advice and go to a Michelin starred restaurant for lunch only to try it out first.