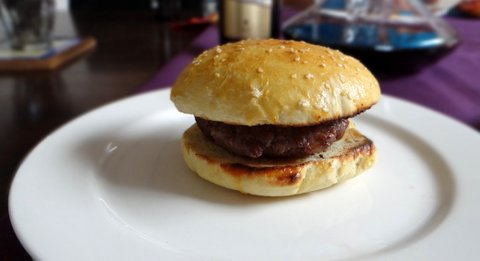 I do not eat a lot of fast food. I don’t care so much about the calories or fat (that just means eating a bit less of it), but I do care about the taste. If something isn’t necessarily the healthiest food in the world, then it should taste real good! And most fast food just tastes generic and often even bland. Just like most people, I love pizza, and I love hamburgers. But for me it has to be good pizza, or in this case a good hamburger! I came across an article on Serious Eats about finding the perfect blend of different cuts of beef for the perfect hamburger, and was intrigued. I read some more burger research on Serious Eats and decided to make my own hamburger completely from scratch. Blending my own beef, baking my own bun and even making my own ketchup. It was an interesting experience and the result was very tasty!

Since it was the first time not everything was perfect, but that leaves some room for improvement for the next time. Blending my own beef definitely paid off, that’s something I’ll do more often. Heinz does a pretty good job of making ketchup, so even though it’s nice to control what goes into it and to make it to your own taste, I think I will not always be making my own ketchup. I am still undecided whether it is worth baking my own buns since these turned out good but not spectacular. I will certainly try again though.

Since this is me experimenting, I’m going to write what I have done rather than give you a recipe. I will also point out what things I will do differently next time.

Blending and grinding the Beef

Based on the article on Serious Eats and what is available here, I decided to use equal parts of sirloin (Dutch: dikke lende), boneless short ribs (Dutch: naborst), and brisket (Dutch: puntborst). The meat was already free of any gristle (cartilage). Dutch beef is very lean and has little marbling, so I decided not to trim away any fat. The fat cap is quite tough and would not grind at the same speed as the meat, so I decided to dice the fat much smaller and grind it separately first. 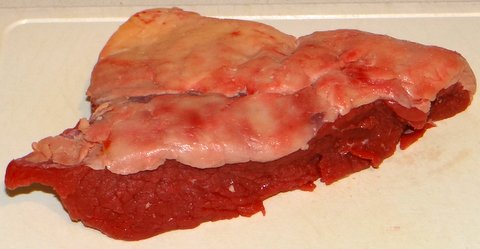 The boneless short ribs (or at least as close to that as available in the Netherlands) that I used.

The piece of brisket I used.

Again I separated the tougher parts and cut them up more finely. 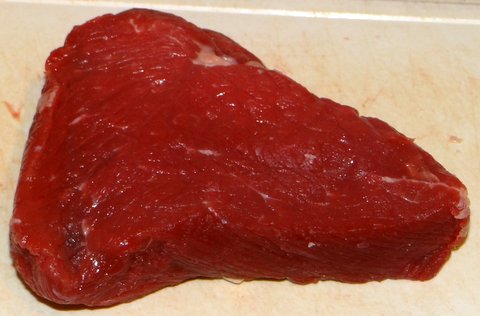 And finally the piece of sirloin.

I put the meat on ribbed baking sheets and put it into the freezer for about 15 minutes to firm it up for easier grinding. I also put the bowl and the blade of the food processor in the freezer.

I divided the meat into batches, dividing the five types of meat equally. I started grinding the tough fatty bits.

I pulsed as many times as needed to get something that looked like ground beef. 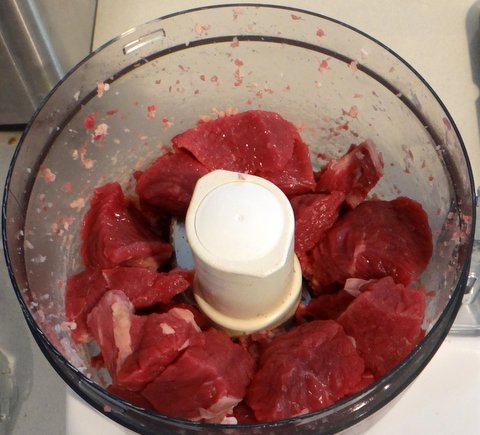 Then I added cubes of lean meat, blending the three types. 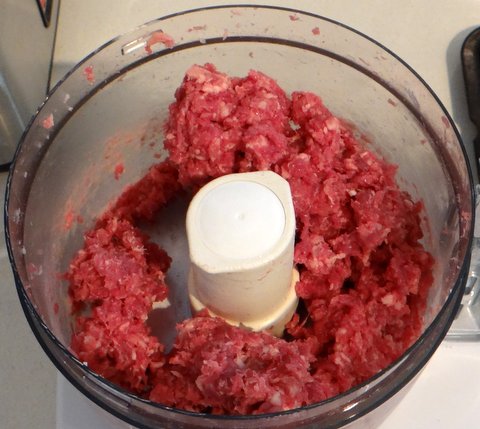 Then I pulsed again until I obtained a consistency that looked right to me: fine but not too fine. 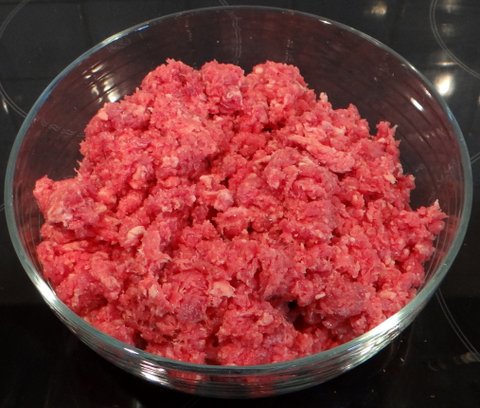 The beef was now ready to shape into patties. Next time I will probably freeze it even longer, since the meat was still being smashed a bit rather than being chopped. The more intact the meat is, the more juicy the hamburger will be in the end. This also means not mixing salt and pepper into the meat (which will make it less ‘loose’) but seasoning heavily on the outside instead.

I may also ask my butcher to do the grinding for me, using the proper blend of cuts, and just grind it once (rather than twice, which is the usual practice in the Netherlands).

I thought it would be nice to make brioche-style buns, so I based my buns on this recipe from Serious Eats.

Since I don’t own a dough mixer (yet…), I always mix my bread dough in my bread maker. A nice feature is that it also warms the dough, which helps the yeast to work. I started by crumbling 24 grams of fresh yeast and sprinkling it with 20 grams sugar (1 1/2 Tbsp). 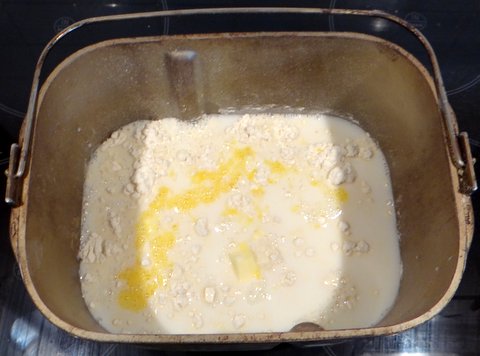 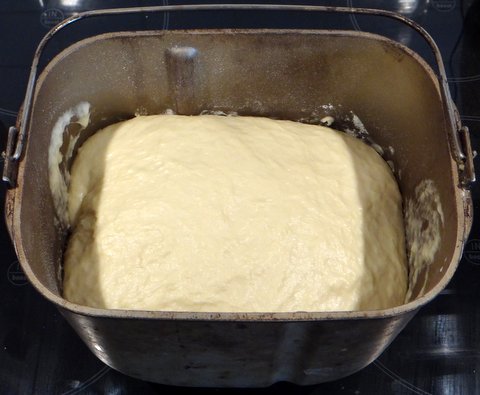 I used the ‘pizza’ setting on my bread maker to turn this into a dough. 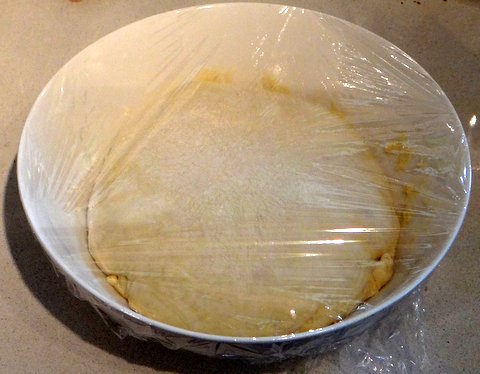 I put the dough in a bowl and covered it with plastic wrap. 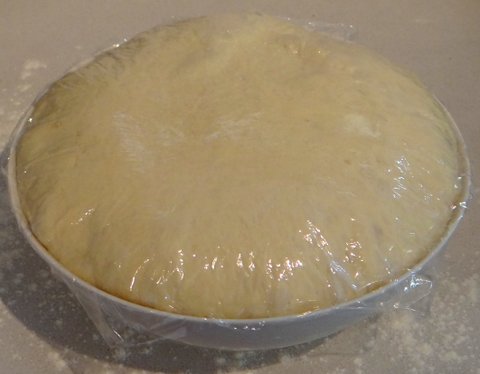 I let it rise at room temperature until doubled in volume, about 2 hours.

I kneaded the dough a little on a floured workspace. 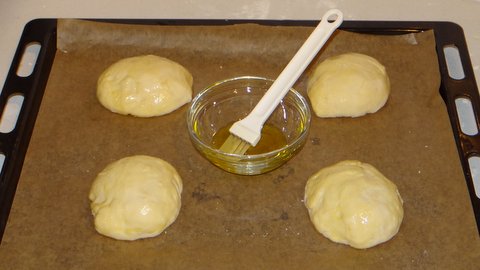 Then I shaped the dough into 10 balls of equal size, and put them on a baking sheet lined with parchment paper. I brushed each ball lightly with olive oil.

I covered the baking sheet with a kitchen towel. 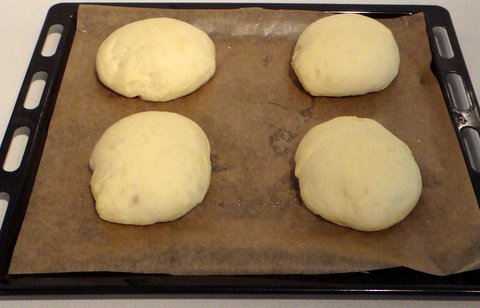 And let them rise at room temperature until doubled in volume, about 2 hours. 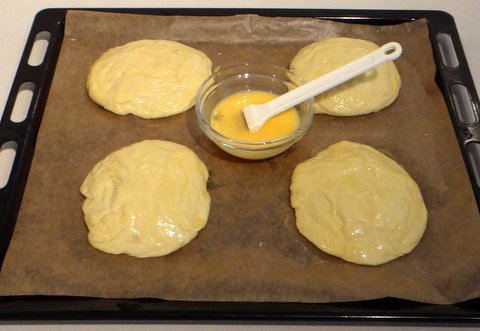 I then made egg wash by beating an egg with 1 Tbsp water. I flattened each ball by gently pressing down, and brushed each bun with egg wash.

I sprinkled the buns with sesame seeds, and baked them for 7 minutes at 205C/400F. 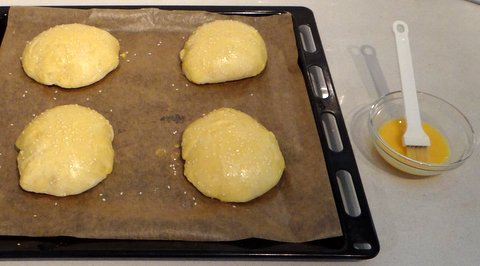 I then gave them a second layer of egg wash.

I then baked them for 15 minutes longer, but they still weren’t a shiny golden brown but merely golden.

That is why next time I will bake them at 225C/440F, so they will be shiny golden brown on the outisde in 10 minutes  and thus less dry on the inside. 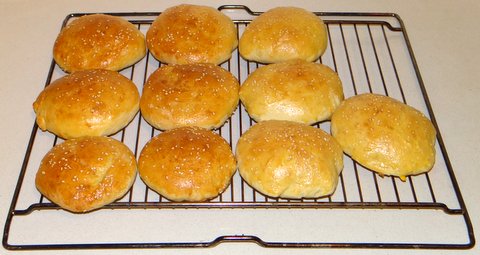 I let the buns cool on a wire rack.

When I do something, I like to do it all the way. So when I’m making a burger from scratch, I’m also making the ketchup from scratch. I did some research online and noted that all recipes for home-made ketchup got bad reviews from other users. This is not strange considering that Heinz does such a good job that people expect ketchup to taste exactly like that. I decided to give it a try anyway, combining ideas from various recipes that I saw and doing what I thought made sense. 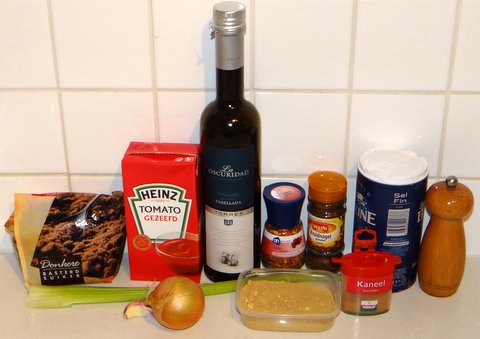 This is what went into the ketchup. I thought it would be fitting to use Heinz tomato puree (sieved tomatoes, passata), taking into account that this is only tomatoes and salt so no cheating.

I started by chopping 1 clove garlic, 1 small onion and 1 celery stalk and sautéing this in 1 Tbsp olive oil until the onion was translucent. 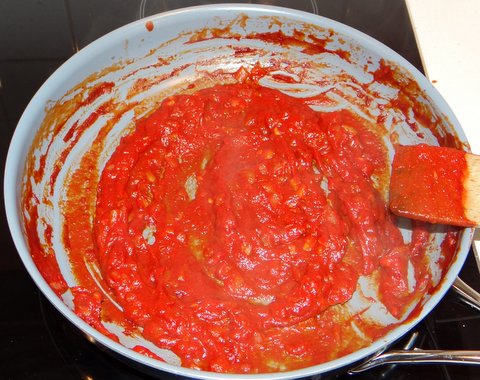 I let this simmer until it had a nice thick consistency, about 45 minutes. 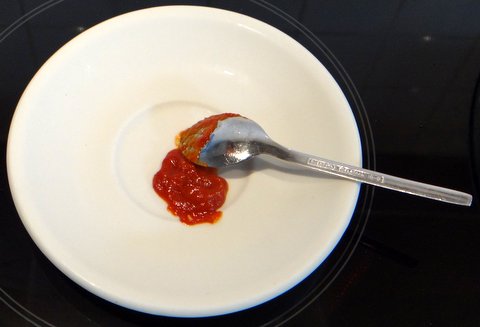 I then used a foodmill with the finest insert to obtain a smooth ketchup (leaving out most of the onion, garlic, and celery).

The resulting ketchup was nice. Certainly different from general ketchup, and perhaps a bit too spicy and not ‘tomatoey’ enough. So next time I will double the amount of tomatoes compared to the amount of other ingredients.

I shaped the meat into patties, trying to be as gentle as possible to get nice loose patties that do stick together. I made a slight dimple in the center to prevent the cooked hamburgers to like like eggs.

I did not add anything else like eggs, bread crumbs, or onions into the hamburgers, since I wanted them to have a beefy taste and have a juicy texture.

I decided to pre-cook part of the hamburgers sous-vide. I seasoned them liberally on the outside with salt and freshly ground black pepper. 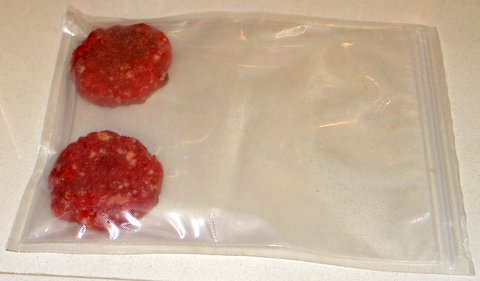 I used ziploc sous-vide pouches that were sealed by submerging them (water displacement method) rather than using a vacuum sealer, since that would compress the meat too much.

I cooked them sous-vide with my ‘warm aging’ method to develop additional flavor and tenderness: 1 hour at 39C/102F, 1 hour at 49F/120F for the warm aging, followed by 2.5 hours at 55C/131F to pasteurize the beef and cook to medium rare.

I patted the patties dry with paper towels, and brushed them very lightly with olive oil for easier searing.

Then I seared them very quickly on a very hot BBQ. I also toasted the buns briefly on the BBQ.

The resulting hamburger was very tasty with a very beefy taste. Since I baked the buns while the beef patties were already cooking sous-vide, I did not coordinate the size of the patty and the size of the bun properly (taking into account that the patty would shrink as well when cooking), so the bun ended up being a bit too big (or the patty too small).

The patties that were not pre-cooked sous-vide were cooked on the BBQ in the regular way, flipping often (which is the best way to get a cooked interior without overcooking a thick layer of beef on the exterior). Those patties seemed to fall apart more easily than those pre-cooked sous-vide, and it was more difficult to cook them perfectly medium rare (since it was even harder not to let them fall apart with an instant-read thermometer inserted into them). The falling apart may have been due to the fact that the patties were at room temperature rather than straight from the fridge, or because the sous-vide patties had been compressed somewhat more by being submerged into the water bath.

A beefy, well-seared burger goes very well with big tannic red like a red Bordeaux, or a Bordeaux blend (cabernet sauvignon & merlot) from another region. We had a nice bottle of 2004 Kermesse with it, a vino da tavola from Elena Walch in Alto Adige (Italy). It is called kermesse (carnival) because it is made from 5 grapes in equal parts: cabernet sauvignon, merlot, syrah, lagrein (the local red grape from Alto Adige) and petit verdot. It is aged for 18 months in French barriques, half of them new. It is only a ‘vino da tavola’ since this combination of grapes is not allowed for a DOC Alto Adige, but the quality (and price) is certainly worthy of a DOC.