I’m really happy with my new stand mixer. One of the things it does really well is making pasta dough. Of course you can also do this by hand, but especially when you’d like to make pasta dough from eggs and 100% semola di grano duro rimanicato (rather than 50% or 100% flour of type “00”) it is much more pleasant to use the stand mixer instead. Such dough can be very tough and difficult to knead, but the stand mixer does the trick as easily as with 00 flour. A stand mixer is also great if you’re lazy! Sometimes when I make dough by hand I’m too lazy to knead it properly, and I will run into problems when I roll out the dough. With a stand mixer you can just let it run until the dough is perfect.

If you don’t have a stand mixer, look here how to make fresh pasta dough by hand or using a food processor for the initial mixing of the dough. This is also the place to go for instructions how to roll out the pasta dough, because this post only tells you how to make the dough with a stand mixer.

There is something strange about making pasta dough with a stand mixer and that is that you use slightly less flour for the same amount of eggs as for making dough by hand. I don’t know why this is, but Biba Caggiano says so and I found it to be true. Perhaps it’s because the dough dries out more while it is being kneaded by the stand mixer?

Fit the stand mixer with the paddle attachment. Break the eggs into the bowl. 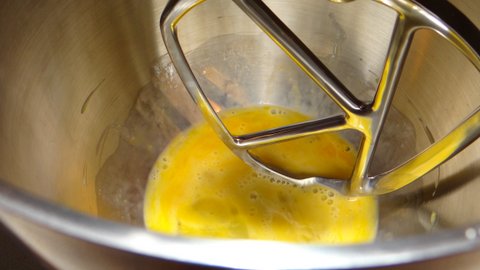 Turn the mixer on until the eggs are lightly beaten.

Now add the flour slowly while the mixer is running.  Just like with making pasta dough without using a stand mixer, it is a good idea not to add all the flour in the beginning but to start with 75-80% or so and then gradually add more. If you add too much flour at once, the dough will become very tough and when you add an additional whole egg you will probably end up with too much dough. 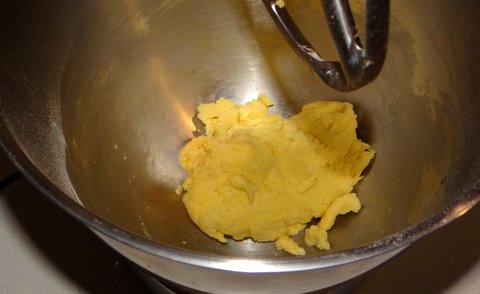 Keep adding flour until the dough comes together and is not sticky anymore. You may not need all of the usual 100 grams (5/8 cups) for each (large) egg.

Now it’s time to switch the paddle for the dough hook. Run the machine on medium speed for 5 minutes or until the dough is smooth and elastic. You can check this by poking the dough with your finger: it should bounce back slowly.

Wrap the dough in plastic wrap and let it rest as usual.