On the beautiful Golfo di Policastro in Basilicata, Southern Italy, we had a wonderful dinner by the sea at Cala del Citro in Maratea. One of the dishes was black tagliolini with raw squid, and this recipe was inspired by that. Since only frozen squid was available, I cooked the squid sous-vide instead. With hindsight I should be sliced the squid a bit more thinly, but otherwise this dish turned out great. The combination of flavors and textures works very well, and the colors are also very nice.

Today marks the 7th anniversary of this blog. It features almost 1,100 recipes and almost 100 restaurant reviews, and over 2.3 million views. With 90 blog posts so far this year I have been blogging a bit less frequently than before, partly because I already spend so much time sitting behind a screen at work. What keeps me going is your comments, especially if you let me know you’ve prepared one of my recipes. So keep them coming! 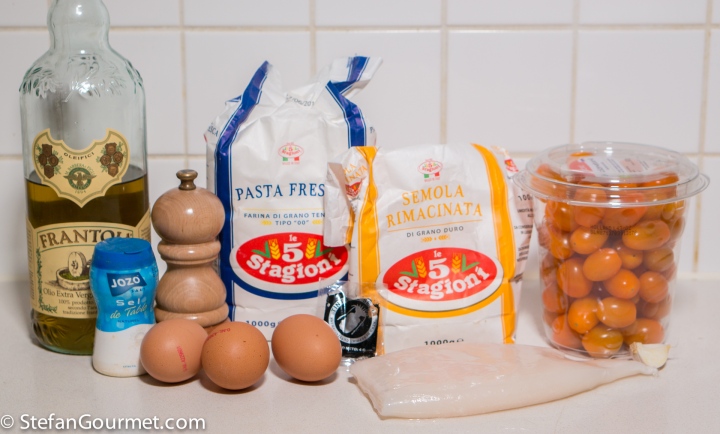 For 4 servings as primo piatto

To make the pasta, combine the eggs with the squid ink in the bowl of the stand mixer.

Process with the paddle attachment until it is mixed well.

Now add the flour, and mix with the paddle attachment until it comes together. You may need to add some water or flour; click here for a full explanation of how to make pasta dough with a stand mixer.

Once the dough has come together, switch over to the dough hook. Allow the machine to knead the dough until it is smooth and elastic, 5 to 10 minutes. 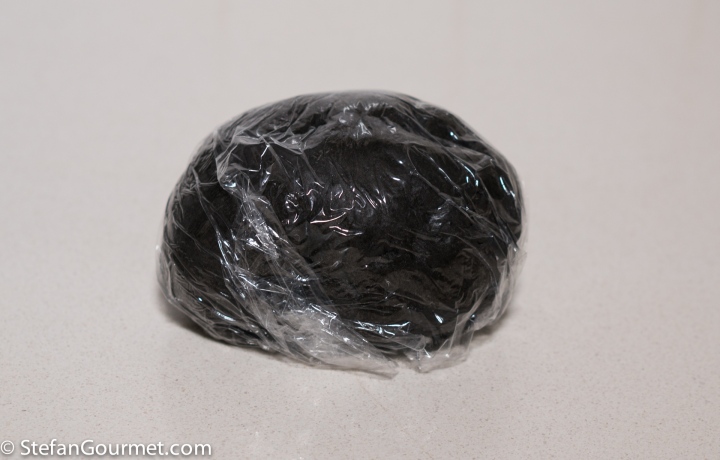 Wrap the dough in cling film and refrigerate for at least an hour.

While the pasta is resting, slice the squid into thin strips (thinner than I did on the photo).

To make the tomato sauce, put the yellow cherry tomatoes in a food processor…

Push the pureed cherry tomatoes through a food mill. First through the coarse disc…

…and then through the fine one, to remove all of the seeds and pieces of skin.

Heat 2 tablespoons of extra virgin olive oil in a frying pan. When the oil is hot, add a clove of garlic, peeled, and thickly sliced, tilt the pan, and cook the garlic until it is golden. Discard the garlic.

Add the tomatoes to the garlic-infused olive oil, and bring to a boil. 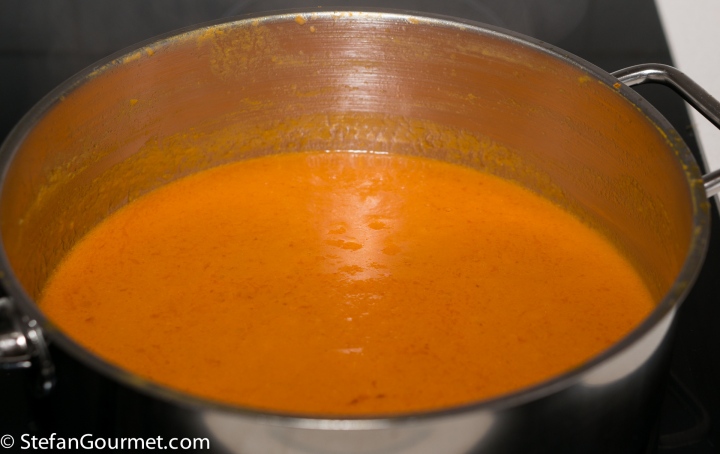 Reduce to a simmer and simmer until the sauce is no longer watery. Taste and adjust the seasoning with salt and freshly ground white pepper.

Roll out the pasta into thin sheets…

…and cut them into tagliolini. Bring a large pot of water to a boil.

When the squid has been cooked sous-vide, take it out of the bag and pat dry with paper towels.

When the water boils, add salt and the tagliolini. Cook until al dente. The cooking time will depend on how thin you made the pasta and how much you allowed it to dry before cooking, but usually it only takes 1 or 2 minutes.

In the meantime, keep the squid warm in a frying pan over low heat and season with salt and freshly ground white pepper. Make sure the squid doesn’t get heated over 58C/137F.

Drain the pasta as soon as it is al dente, and add it to the tomato sauce. 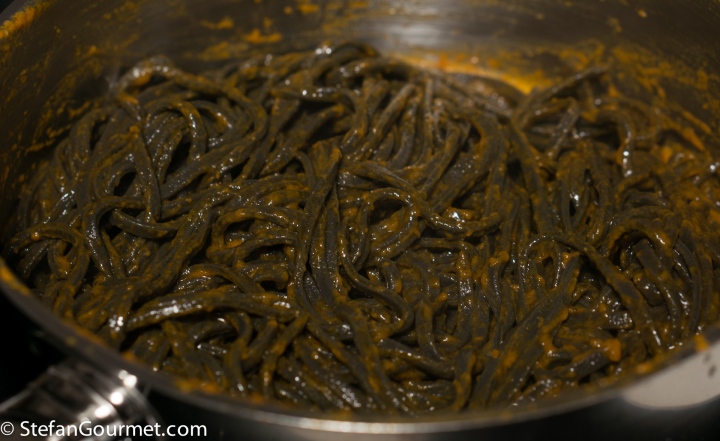 Serve the pasta on preheated plates, topped with the squid. If you have it, you could grate some bottarga on top.

Leek Royale is a great way to turn the humble leek into a fancy side for a special occasion. Royale de Poireaux is a French side dish that is essentially a leek ‘custard’ made with eggs and cream. The green part of the leeks is used, so for once you can save the white parts for another use. Leek Royale is a great side dish with either fish or meat; above it is pictured as a side to venison steak and fried potatoes. The leek royale doesn’t look as good as it will when it’s freshly made, because I had made these the day before and reheated the squares in the oven.