The types of flour available in Italy are different, or at least labeled differently, from flour available elsewhere. Two types, farina di grano tenero 00 and semola di grano duro rimacinata are available more and more outside of Italy because we like to use them to make pizza and pasta. Grano tenero means soft wheat and is used for pastries. Even though it is referred to as tenero in Italy, farina 00 can be high-gluten to use for pizza or fresh egg-based pasta as well as low-gluten to be used for cakes. Grano duro means hard wheat (durum wheat) and is used for dry pasta as well as water-based fresh pasta in Southern Italy. If you buy flour that is labelled as ‘all purpose flour’, you don’t really know what kind of flour it is. It probably has low gluten and then will be unsuitable for making pizza or pasta. For making bread with a long rising time such as ciabatta, flour with a very high amount of gluten is used in Italy. This flour is called farina Manitoba, and is named after the province in Canada where this wheat is being produced. The high amount of gluten makes it ‘strong flour’, which means that the dough can rise better.

I haven’t found a source for Manitoba flour in the Netherlands, but I was curious about the difference with bread flour as it is available here and so brought a bag of farina Manitoba from Italy. I used to farina Manitoba to bake ciabatta bread for the first time, and I was very pleased with the result. For ciabatta the long rise is crucial to give it the characteristic airy texture and crispy crust. I’ve based the recipe on that of GialloZafferano.it. It is interesting to note that three different types of flour are required to make ciabatta: 00, manitoba, and semolina. The latter is used as a ‘gluten coat’ for the rising and for the crust.

The special airy structure of ciabatta is not only caused by the manitoba flour, but also by using a very wet starter dough and using three rising steps. Next time I will try to make ciabatta with the same baking technique but with bread flour as it is available in the Netherlands, to see how much difference it makes to use manitoba flour. Making ciabatta is a bit finicky as it is important to keep the air bubbles, but I was quite happy with my first attempt. Apart from the structure, also the flavor was really good and different from the Italian bread that I usually bake. 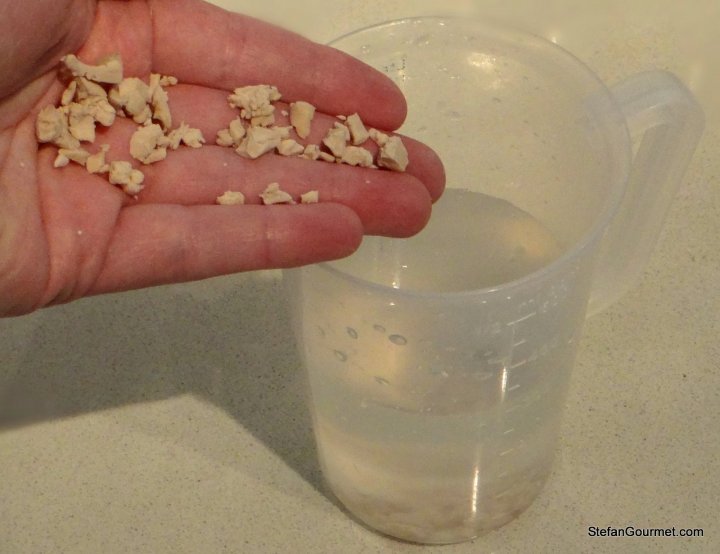 Crumble 6 grams of the yeast and dissolve it in 300 ml of the water. 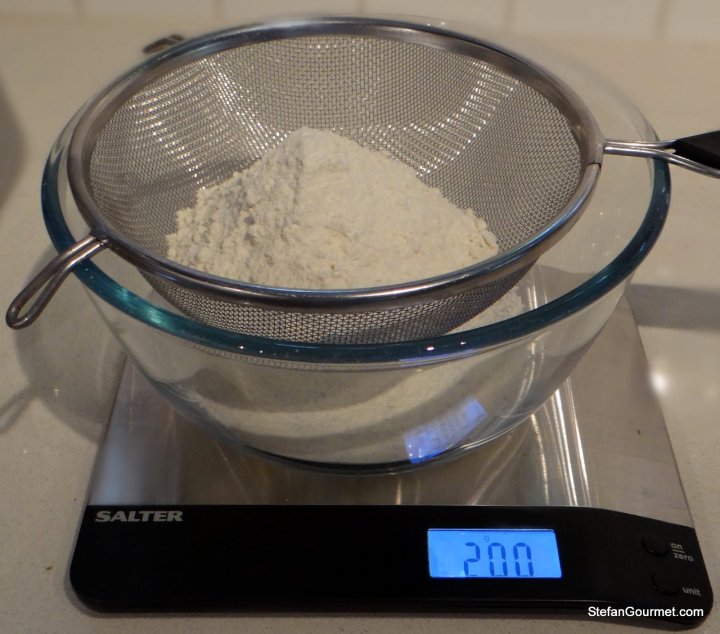 Sieve 200 grams of the manitoba flour. 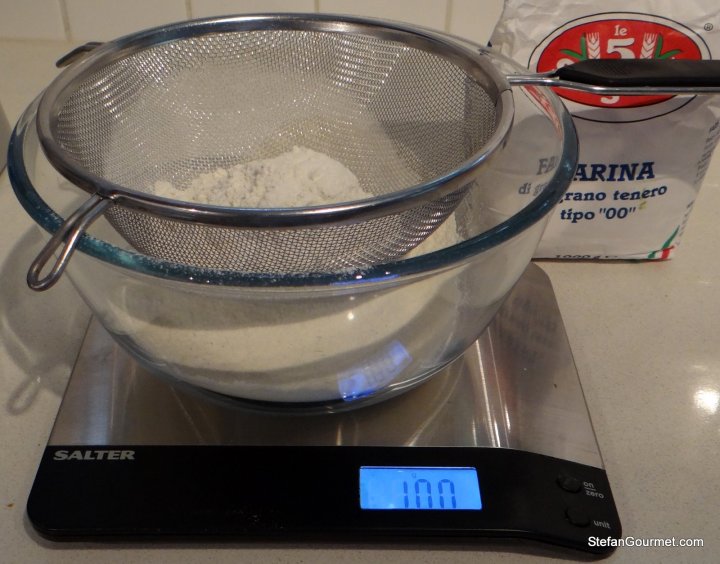 Combine the two types of flour in a bowl and stir to mix.

Add the water with the yeast while stirring.

Stir until the dough is homogeneous. You can also do this step in the stand mixer, which is what I will do the next time.

Cover the bowl with plastic wrap and allow to rise for three hours at room temperature. 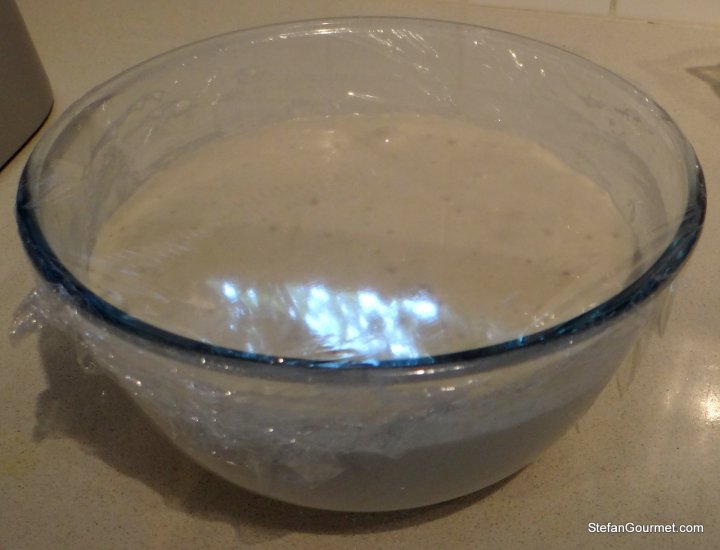 The starter dough will have risen quite a bit.

Put the starter dough in the bowl of a stand mixer, fitted with the paddle attachment. 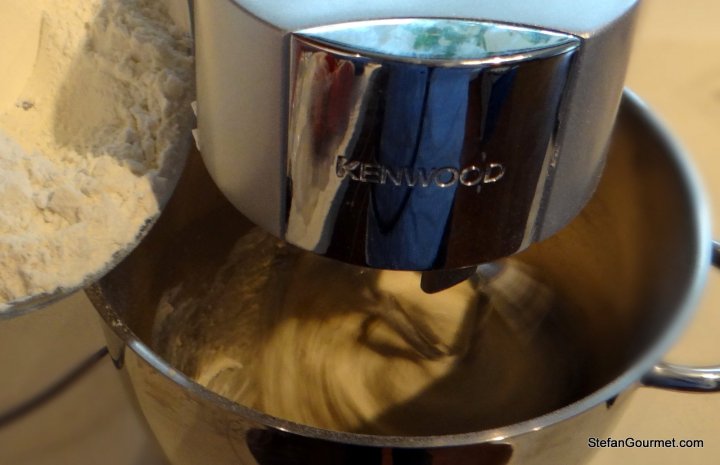 With the machine running on slow speed, alternate between adding the flour in parts…

Once all the flour and water have been incorporated, remove the paddle attachment, cleaning it with a spatula.

Knead the dough with the dough hook for 5 minutes on medium speed.

With the machine running, add the salt, and knead for another 5 minutes.

Cover the bowl with plastic wrap.

Allow to rise in the oven with only the light turned on for an hour.

The dough should double in volume.

…and make another fold as well.

Repeat the same type of fold from the other direction…

…and a final fold. These folds improve the structure of the dough for better rising.

Cut the dough into 4-6 loaves using a dough scraper. 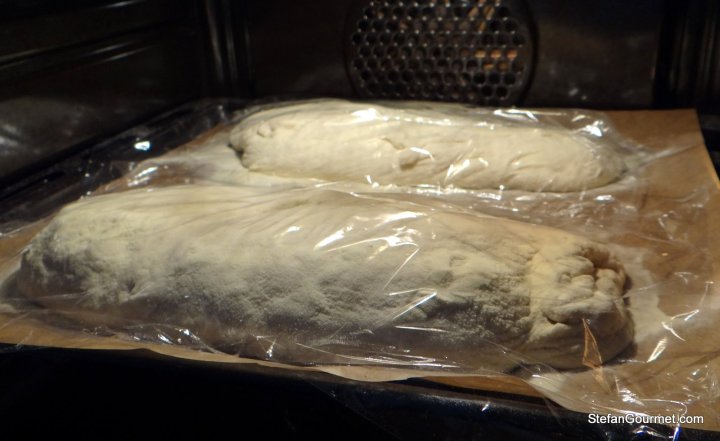 Arrange the loaves on baking sheets lined with oven paper, leaving enough space to allow them to expand. Let the loaves to rise in the oven with only the light turned on, first sprinkled with semolina flour and then covered with plastic wrap.

I forgot to take pictures of the baking steps. Preheat the oven to 250C/480F (do not forget to remove the rising loaves first, carefully not to let them deflate). Put a container with some water in the oven to increase the humidity in the oven (for a better crust). Lower the temperature when you put the loaves into the oven to 225C/440F, and bake for 30 minutes (do not forget to remove the plastic wrap first). Allow the loaves to cool on a rack before cutting them.

Some recipes will tell you to move the loaves again after the final rise, but despite the use of strong manitoba flour they will deflate easily so it is best to handle them as little as possible to keep them airy.