Our favorite restaurant guide for Italy is that of “Gambero Rosso”. It is available as a book, but also as a handy app. The best restaurants are awarded one, two, or three forchette (forks), and the best trattorie are awarded one, two or three gamberi (shrimp). We’ve been using the Gambero Rosso guide since 2007, and we have never been disappointed by its judgments. When we go to Italy, we make it a sport to include as many tre forchette and tre gamberi restaurants in our itinerary as possible. It goes without saying that yesterday’s Devero was a tre forchette.

A trattoria means a simple restaurant, but that doesn’t mean that the food isn’t good. On the contrary. Trattoria do have less frills and are usually less expensive. Our visit to Locanda al Gambero Rosso has a bit of history behind it. You see, in 2008 we were on a vacation to Puglia and Campania and as usual were dining at as many tre forchette and tre gamberi as possible. This included the famous trattoria Antichi Sapori in the small village on Montegrosso in Puglia. We had a very memorable dinner at Antichi Sapori (as we were stuffed with food to the brim), and a nice couple was sitting next to us in the restaurant as well as sleeping in the adjacent room in the nearby agriturismo (bed and breakfast in the countryside). We chatted a bit and told them we were visiting tre gamberi and tre forchette. They told us we should come eat at their trattoria in Emilia-Romagna called Gambero Rosso. We planned to do so, but as Bagno di Romagna is a bit out of the way we didn’t get around to it until now.

The aim of Locanda al Gambero Rosso is to recreate the flavors of the past, local dishes made with local produce and served with local wines. Although this is of course very different from a dinner at a restaurant with Michelin stars, it is surely delicious and doesn’t break the bank. For the degustation menu including matching local wines we paid only 100 euros for the two of us.

The chef’s welcome, served by Giuliana herself, is a zucchini soup with a bit of stuffed zucchini on top. The zucchini soup has great depth of flavor. 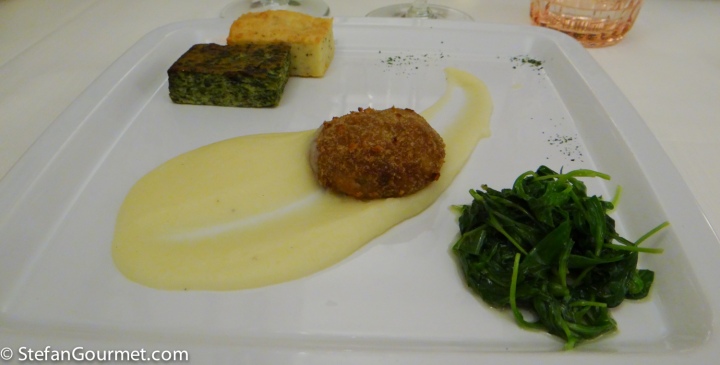 The antipasto is polpette, meatballs as they were made by grandmother Diva, the former chef of the restaurant, served with sauteed wild greens, mashed potatoes, vegetable sformato and potato gratin. As the meatballs are traditionally cooked in the oven, so are the sides. Everything is great flavor and matches well with the Albana di Romagna, the full-bodied local white wine.

The degustation menu includes a sampler of three different primi piatti. The first one is a soup (puree) of local wild greens with cubes of pasta imperiale, a local type of egg-based pasta that is baked before it is cut into cubes. 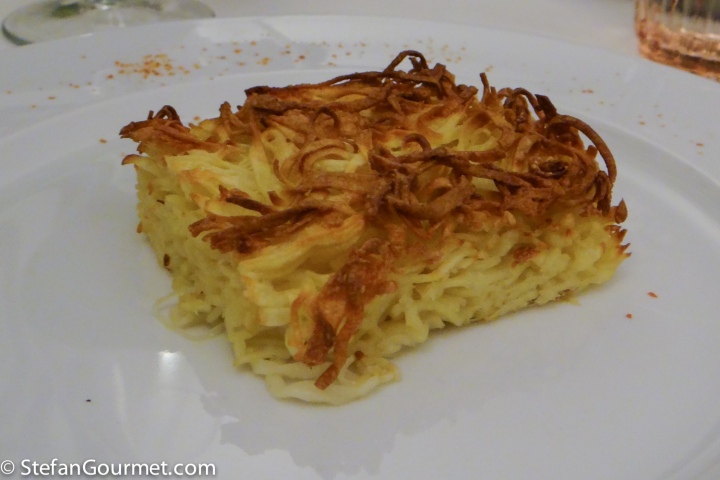 The second primo is called basotti and even more local, as this is only prepared in the town of Bagna di Romagna. It is fresh pasta cooked in the oven in a greasy stock. The top is crunchy and browned. For such a simple dish, it is surprisingly tasty. For the wine we’ve changed over to an unoaked sangiovese di romagna that goes well with the dish.

The final primo is ravioli stuffed with potato and served with formaggio di fossa, the local cheese with a special flavor as it has been aged in holes in the ground. Again it is amazing how flavorful this is for such humble ingredients. We change over to an oaked sangiovese di romagna, and both go well with the ravioli. 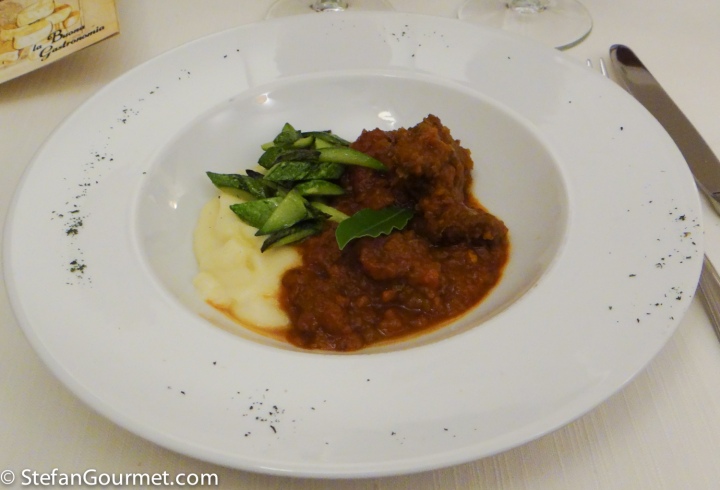 The secondo piatto is braised romagnola beef served with zucchini and mashed potatoes. The meat is very flavorful and a great match with the oaked sangiovese di romagna. Slow braising with onion, celery, carrot, tomato, rosemary and sangiovese di romagna red wine has turned tough cuts of beef into a treat.

Most surprising of our meal was the desserts. Not because they were so good, but because all of them worked very well with the local dessert wine, an albana di romagna passito. There was pudding, zuppa inglese, cofffee and pistacchio flavored panna cotta, and a roll of chocolate cake with pastry cream. It is amazing how this trattoria can do the wine pairing so much better than yesterday’s two Michelin star dessert wine pairing disaster. What was nicest was that the wine did not only go well with all four desserts, it also changed character.

Bagno di Romagna is a bit out of the way, but if you are anywhere near it is certainly worth visiting for a great meal! 9/10 for the food, 9/10 for the wine, and 9/10 for service. These are the type of scores I usually give out to restaurants with at least two Michelin stars. Although it is quite a different experience, it is just as enjoyable and you can eat about 5 times at Gambero Rosso for one time at a two star restaurant…