Is there a good reason to go to Torriana, a small village half an hour inland from the Adriatic beach town of Rimini? Yes there is, and it is chef Piergiorgio Parini of Il Povero Diavolo. It is not the single Michelin star that lured us there, but Gambero Rosso’s tre forchette with a 56/60 score for the kitchen (the highest they have given out in the 2014 Gambero Rosso Ristoranti guide is 57/60).

There is no written menu, except for an explanation of the philosophy of the restaurant. You can only pick the number of courses (3+ for 55, 6+ for 75 or 9+ for 95) euros and let Piergiorgio handle the rest. (The + stands for amuse bouche and the like.) His passion is improvisation — he almost never makes the same dish exactly the same twice, and even in a single night dishes may change.

The only thing we did not like is that the lack of fixed dishes also means that it would be very difficult to offer wine pairings — and indeed wine is only available by the bottle. The prices are very nice though — 25 euros for a good wine is very reasonable. We started with a local oaked riesling-chardonnay blend, continued with a local unoaked red, and finished with an albana passito.

The amuse bouche provides a good introduction in what is to come. Raw fish (I don’t remember what kind) with chard, citron, and fresh herbs. An original combination of flavors and textures and delicious. 9/10

Baby squid barely cooked over charcoal with zucchini, zucchini ‘mayo’ and bitter almonds. The baby squid is very tender and has a sublime aroma of charcoal and jasmine. (Jasmine tea was used to prepare the baby squid.)  The zucchini has great depth of flavor and the combination with the bitter almond was very nice. 10/10 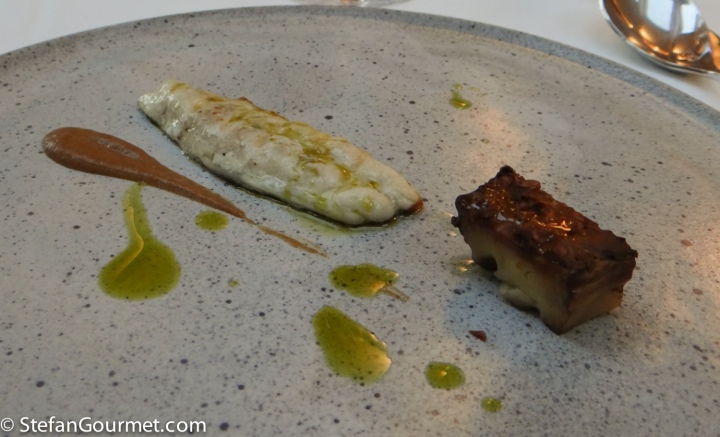 Mackerel with rosemary, eggplant and garlic puree. The mackerel was amazingly tender and juicy. The eggplant was very tender. The garlic puree very nutty. Great combination. 9/10 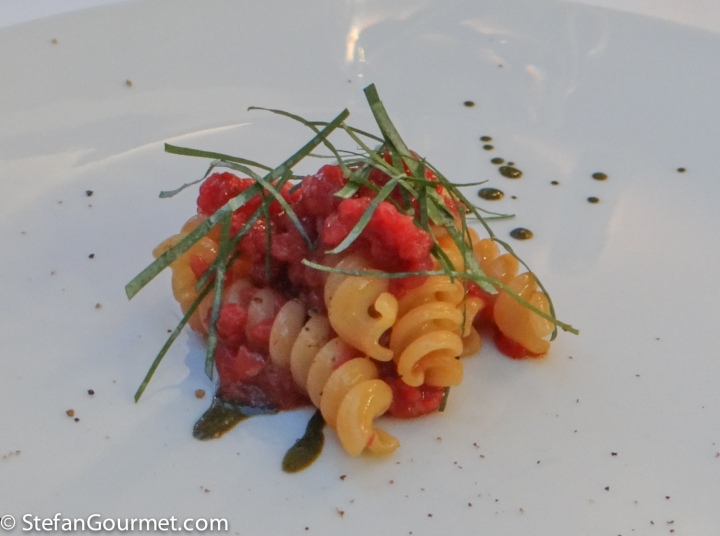 Simply called “white rice” (riso bianco), this risotto is one of the signature dishes and it is amazing. Apparently also this dish changes all the time. Our version was delicious with great depth of flavor and cooked nicely al dente. When we asked what created the acidity, we were told it was distilled tomatoes. 10/10 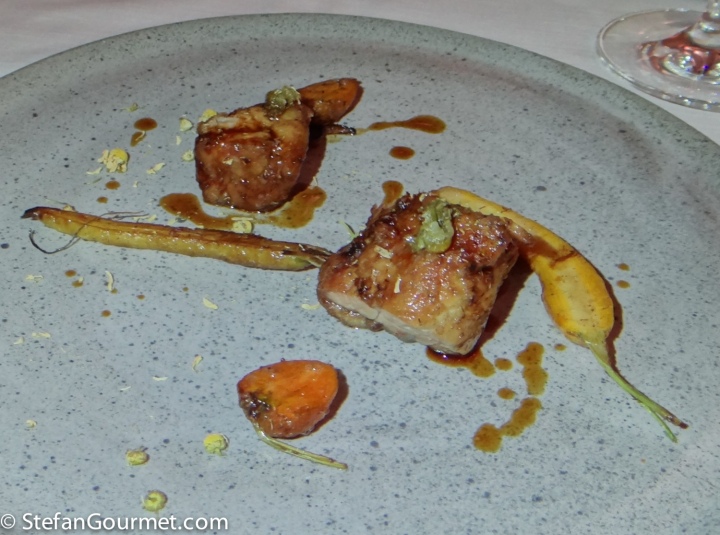 Sweetbreads and carrots. We are not usually very fond of sweetbreads, but these were slightly more cooked than usual and we actually liked it better that way. The dried camomile flowers were also a nice addition. The carrots were fried in butter and still crunchy. 9/10 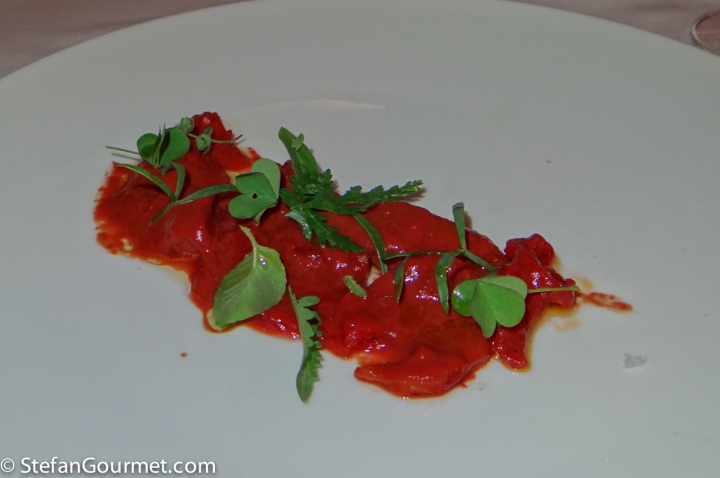 When the chef brought this dish to our table, he announced it as carpaccio di narce, with a big smile on his face. At first I thought it was an Italian word I didn’t know, but he promised he’d show us a picture of the animal. It was actually various roasted vegetables including bell peppers, served with wild herbs like so many other dishes. Narce is an anagram of “carne” (meat), and the drawing he showed us (unfortunately I didn’t take a picture of it) was an ‘animal’ constructed of various vegetables. 9/10

We still had some red wine left to finish, and asked for a little bit of cheese to finish it with. We got some nice gorgonzola and local pecorino “di fossa” that was nice with the red and also a good start for the albana passito.

The first dessert was a grilled apricot with wild flowers. Very nice. 9/10 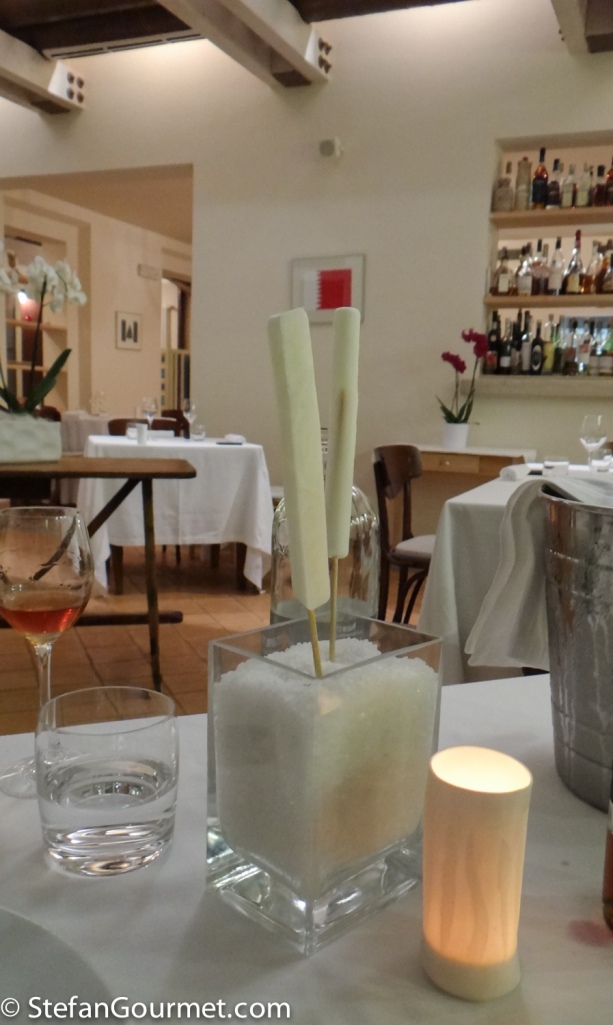 These popsicles were also part of dessert. I don’t remember what was in them.

And finally some nice chocolates with the coffee.

The originality of our dinner at Povero Diavolo made me think of Noma, the famous restaurant in Copenhagen. Everything is made from local produce (chocolate is produced locally in Italy, if not the cocoa beans). What is different from Noma and other restaurants is that here there are no gimmicks or fancy presentations to awe. The food is presented beautifully, but on regular plates. The food is awesome all by itself. Chef Piergiorgio is very creative and shows outstanding technical skills in his preparations, using the technique in service to the dishes instead of the other way around. Everything is delicious. For 95 euros this is exceptional value and it is amazing that this restaurant isn’t fully booked months in advance (instead, only a few tables were taken when we were there on a Monday night in July). If it were up to me, the second Michelin star would already be there and a third would not be far away. 9.5/10 for the food!

I’m not rating the wine as no wine pairing is provided. Although it is understandable that it would be difficult to provide a wine pairing given the variable menu, it is what would take a dinner at Povero Diavolo to the next level for me. The wine we had with the food was nice, but with good wine pairings it would make our evening even more special.

The service was very good and very friendly. 9/10

We are already looking forward to our next visit. Let’s see if I can squeeze a detour to Torriana into our itinerary for next year’s trip to Italy…