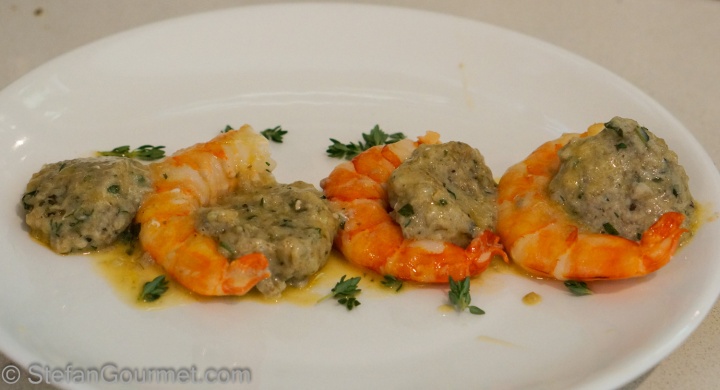 Eggplant and shrimp is a combination I had never tried before, but I did try thanks to Marina of Le Ricette di Baccos and it was wonderful! The eggplant is first turned into what the French call caviar d’aubergines (i.e. eggplant puree), which is then turned into a dumpling with ricotta and aromatic herbs. This elegant appetizer was based upon Marina’s idea, but I made some changes in how I made the dumplings. These eggplant dumplings (gnocchetti) are a bit of work to make, but the wonderful eggplant flavor makes it worth the effort. 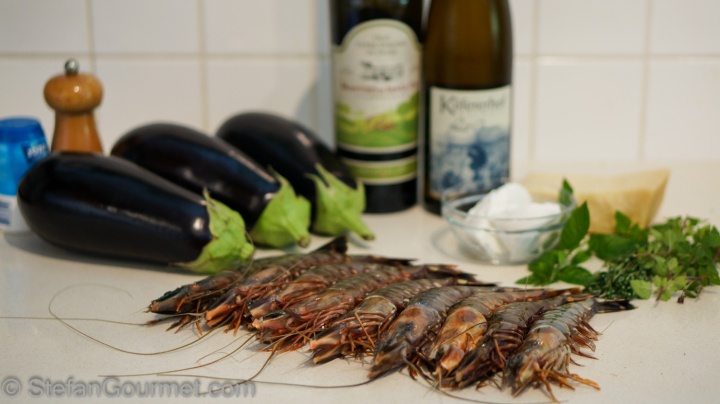 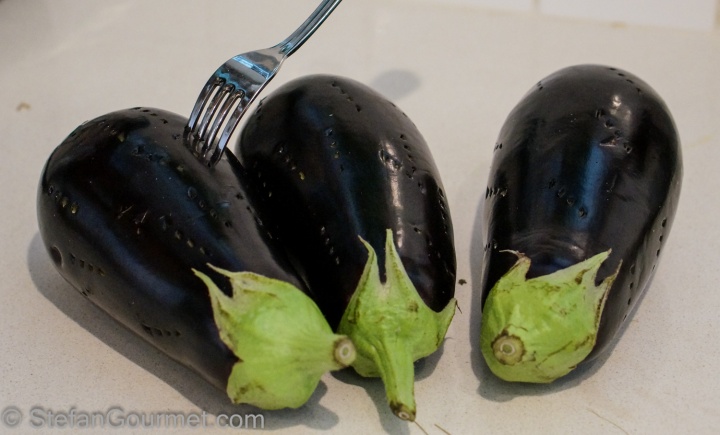 Preheat the oven to 200ºC/400ºF. Pierce the eggplants multiple times with a fork. 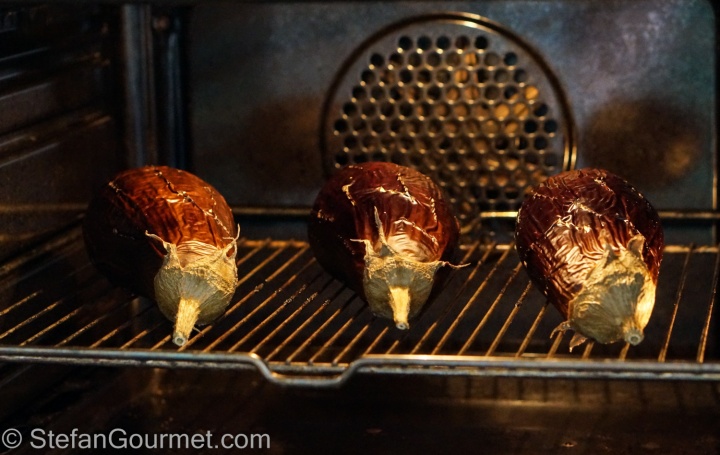 Allow the eggplants to cool until you can handle them. Cut off the stem and the bottom end from each eggplant and discard.

Scrape out the eggplant flesh with a spoon.

Puree the eggplant in the food processor.

Use a foodmill to remove the seeds.

The resulting eggplant puree will still be quite watery.

Pour the eggplant puree into a non-stick frying pan.

Bring to a boil and reduce the heat to a simmer.

Cook the eggplant puree until it is no longer watery, stirring regularly to prevent burning. I ended up with 180 grams of eggplant puree (caviar d’aubergines). 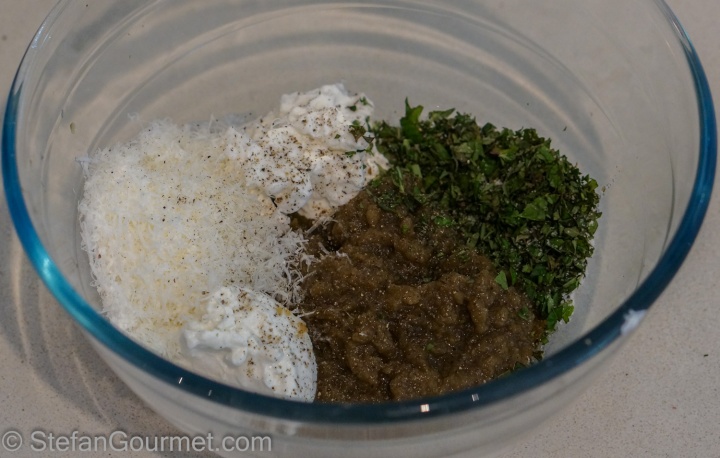 Combine the eggplant puree with the ricotta, herbs, cheese, salt, and pepper.

Stir to mix. The mixture should have a nice thick consistency, not too thin.

Bring a large pot of water to a boil and add salt. 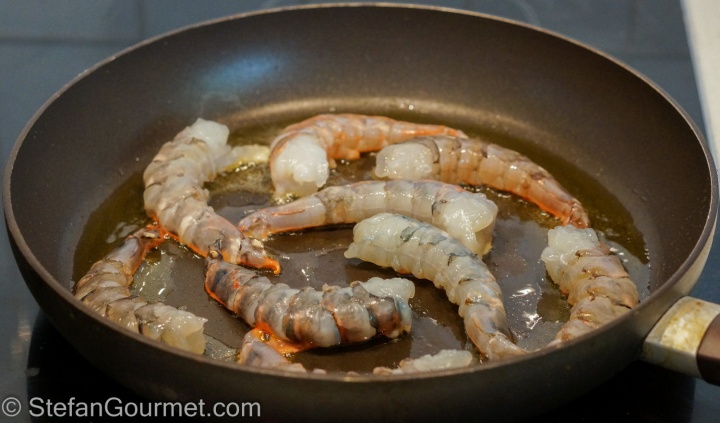 Heat the olive oil in a non-stick pan over high heat and add the shrimp. 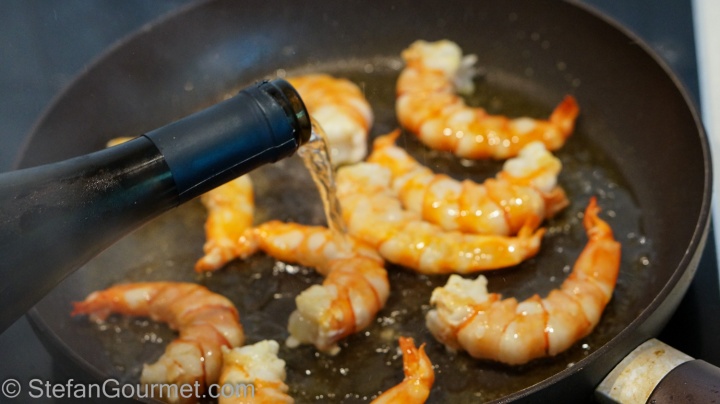 Turn the shrimp over after a minute. Cook for 30 seconds, then add the white wine. 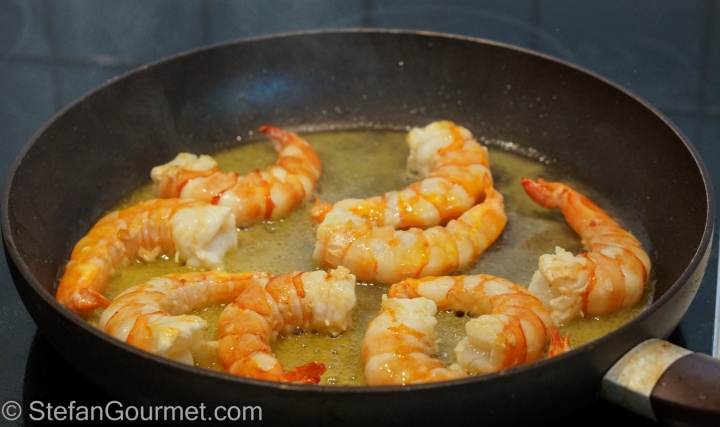 Cook for another 30 seconds, then turn off the heat.

Reduce the heat such that the boiling water will just be simmering. If it boils too vigorously, the dumplings will fall apart. Make a quenelle with two tablespoons (this is a French words that means make a roundish shape that fits right between the two spoons) and lower it into the simmering water. Repeat until you have used up all of the eggplant batter. 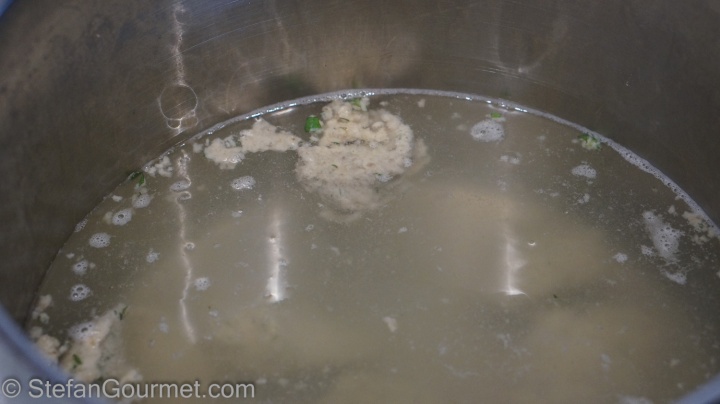 The dumplings are cooked when they rise to the surface.

…and add them to the shrimp. Be careful not to break up the dumplings, which are very delicate.

Serve the shrimp and the dumplings with the pan juices and garnish with a bit of thyme.

Marina suggested a pinot grigio, and that was indeed a good choice. It has to be full-bodied pinot grigio such as from Alto Adige. A lot of bad watery pinot grigio is produced in Veneto (but of course there are exceptions).

This strawberry cake is amazingly yummy and a good way to celebrate the summer while it lasts.