For Christmas I wanted to make a traditional Italian dish that I had not prepared before, preferably something that involved stuffed pasta. As I’ve already made so many stuffed pasta dishes over the years, I wasn’t sure if I would succeed. But then I saw ravioli alla genovese on Enassar’s blog Oven-Dried Tomatoes, and I knew at once that’s what I wanted to prepare. I’ve prepared Ligurian recipes before, but had not heard of these ravioli. They are stuffed with a mixture of meat and greens, and are thus related to neighboring Piemonte’s agnolotti, and are served with a meat sauce that is called il tocco (or u tuccu in the local dialect). Just like in the ragù that is prepared in Campania, meat is braised in the sauce, the sauce is used to dress pasta for the primo piatto, and the meat is then served as secondo piatto. In this case, part of the meat is also used to stuff the ravioli. The recipe for the ravioli will follow tomorrow, but first il tocco.

A logical source to look for the recipe was Paola’s blog about which I already wrote recently, as Paola is from Liguria. She does have a recipe for the sugo, but not for the ravioli. I looked at various recipes for the sugo, and as usual with traditional Italian recipes, each family has its own recipe. What sets sugo alla genovese apart from that of other regions is that it includes dried porcini mushrooms. There are many variations. Some use veal, others use beef. Some use red wine, others white. Some use rosemary, others use parsley. 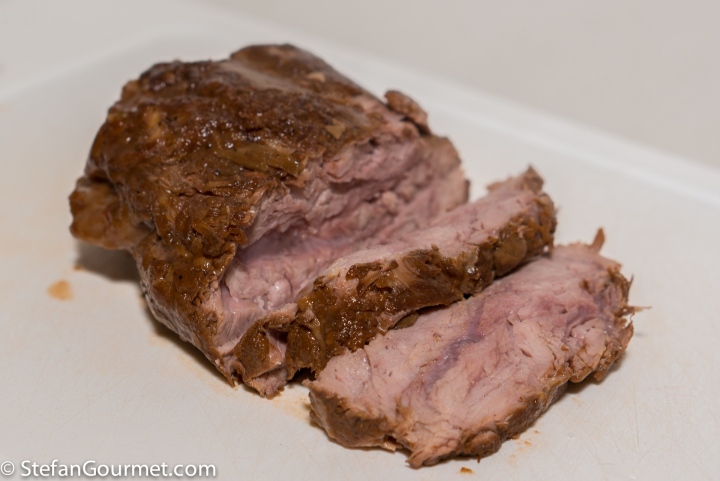 The meat is supposed to be lean. What they mean with that, is that there shouldn’t be a big layer of fat on the meat. If there is, you should trim it away. However, some nice marbling is very desirable, so in that sense it should not be lean at all. The marbling will especially make the secondo piatto much more flavorful. I used a flat iron roast (butlers’ steak, oyster blade steak) from veal, a flavorful cut from the shoulder that is great for stewing. It is relatively easy to prepare a delicious meat sauce, but it takes quite some skill to also braise the meat such that it ends up tender and succulent. Careful temperature control is paramount. Too low, and the meat will remain tough. Too high, and the meat will dry out. As a solution I used my sous-vide and cooked the meat in the sauce for 24 hours at 74C/165F. This makes the veal fork tender as well as succulent. If you don’t have sous-vide equipment, you could braise the usual way for 3 hours or so on the stovetop over very low heat or in a low oven.

The sugo turned out spectacular with a unique delicious flavor from the combination of veal, porcini mushrooms, pine nuts, and tomatoes. It would be great just served on fresh pasta ribbons, but it was also great served with the veal.

For 4 servings to dress a primo piatto, followed by a secondo piatto

4 Tbsp olive oil, or fat rendered from the fat cap on the meat 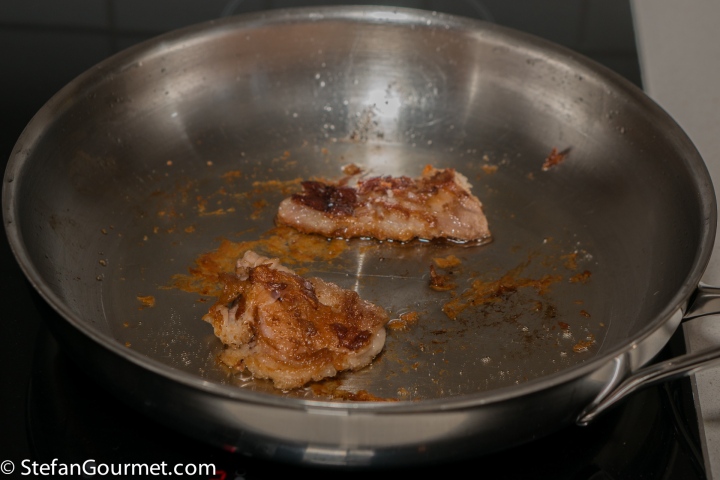 The veal I used came with a fat cap. I trimmed it away and rendered the fat from it instead of using olive oil, to increase the flavor.

Pat the veal dry with paper towels, and season it with salt and freshly ground black pepper. 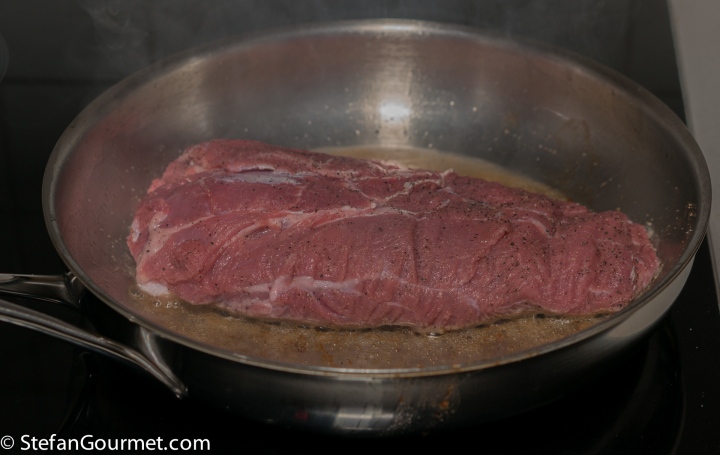 …until deeply browned on all sides. Browning the meat well is essential to develop the flavor. Take the meat out of the pan and set it aside on a plate.

Never use a non-stick pan to brown meat, the whole point of the browning is to develop a crust on the meat as well as in the pan. This crust, which should be very brown but not black, contains a lot of flavor. 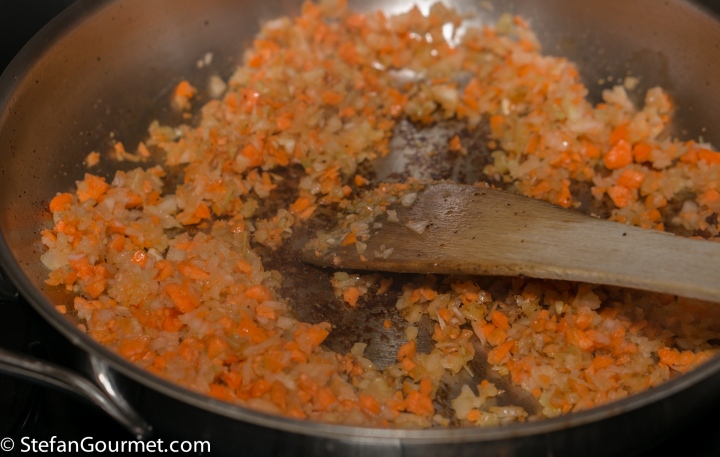 Add minced onion, carrot, and celery (70 grams each) to the pan with the crust and season with salt. Stir over medium heat with a wooden spatula, scraping along the bottom to include all of the brown crust into the sauce. The water released from the vegetables will help with this process. 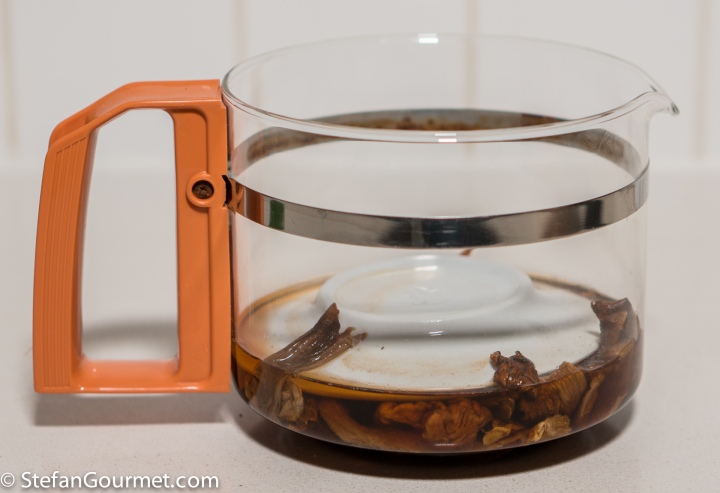 Meanwhile, soak 50 grams of dried porcini mushrooms in about 250 ml (1 cup) of boiling water. Use a small plate to keep the mushrooms submerged. 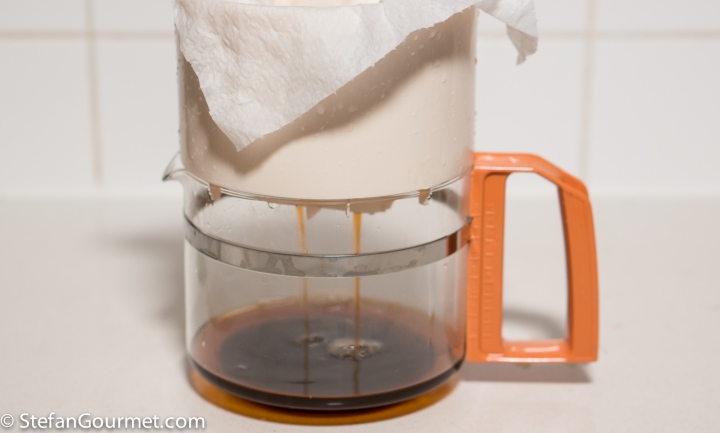 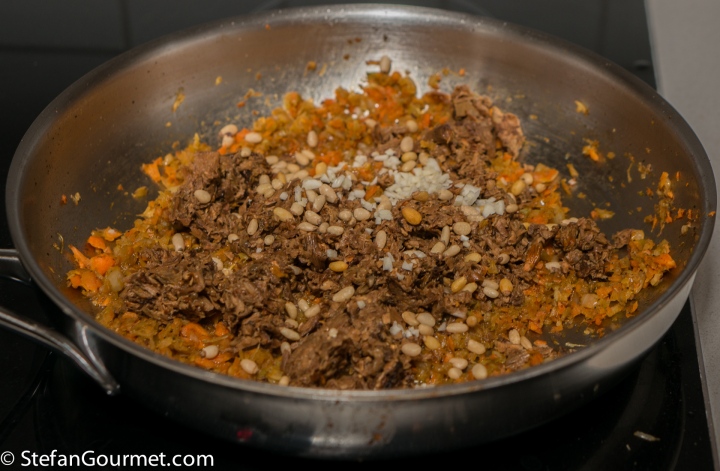 Add 15 grams of pine nuts, the minced porcini, and a minced garlic clove to the vegetables.

Stir for a couple of minutes over medium heat until you can smell the pine nuts and the garlic, but do not let the garlic turn brown!

Deglaze with 80 ml of wine, and stir until absorbed.

…as well as a can of peeled tomatoes, pureed in the food processor.

Stir and bring to a boil. Add a bay leaf and a rosemary sprig. (It is better to tie the needles with some rope, as it makes it much easier to remove them later!)

Add the juices that will have leaked from the piece of veal on the plate.

If cooking the traditional way, return the piece of veal to the pan. Cover the pan, and cook over very low heat until the meat is tender, turning the meat regulary (about every 15 minutes) so it doesn’t dry out.

To cook sous-vide, vacuum seal the meat with the sauce. This can either be done with a ziplock bag and the water displacement method, or by allowing both meat and sauce to cool and then using a chamber vacuum sealer.

Take the meat and sauce out of the bag. Set the meat aside and cover it in aluminum foil.

Bring the sauce to a simmer… 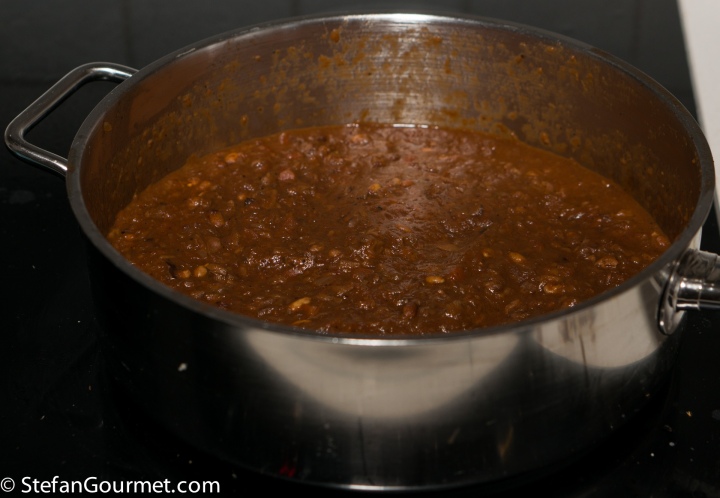 …and simmer until it has a nice thick consistency. Taste and adjust the seasoning with salt and freshly ground black pepper. Turn off the heat and return the meat to the pan so that it can heat back up a little.

…and serve it with some of the sauce.

Reserve the remainder of the sauce to serve over pasta, especially ravioli alla genovese.

Although veal itself is quite mild in taste, the sauce is full of flavor and so a red wine is a good choice. The wine should preferably be aged, elegant, ripe, and smooth, so no flavor bombs with lots of tannins. We enjoyed the meat with a 1999 Taurasi from the Italian region of Campania (near Naples), made from Aglianico grapes and aged in oak barrels before aging it for a long time in the bottle. Due to its age, the tannins have softened and the wine has become elegant. Due to the climate in Campania, the wine was made from very ripe grapes, which always works well with stews.

Red Snapper Veracruz is a wonderful way to serve snapper or other white fish: in a very flavorful sauce that originated in Mexico.