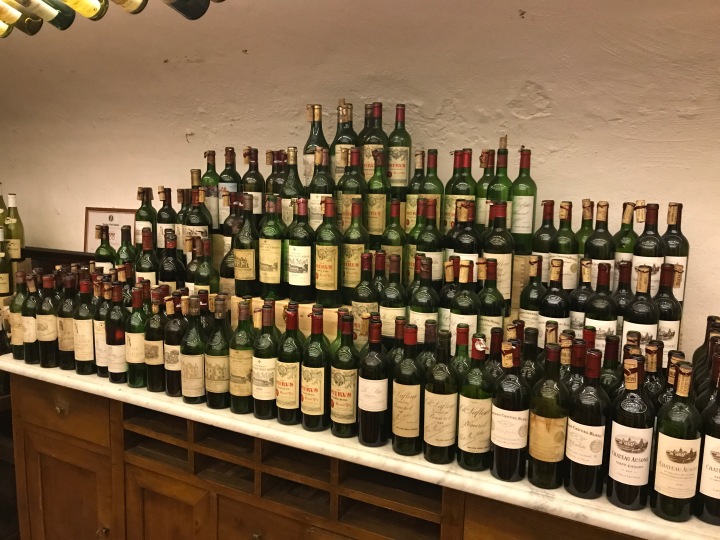 If you go to Enoteca Pinchiorri in Florence, Italy, you should go there for the wine. The name “enoteca” is already a big hint that this is the case, because it is an Italian word that means “wine library”. And not just any wine library, but one that is unique in the world and perhaps even the best. What makes it more unique, is that the restaurant offers you the opportunity to taste the finest wines, also of older vintages, without having to order a whole bottle. 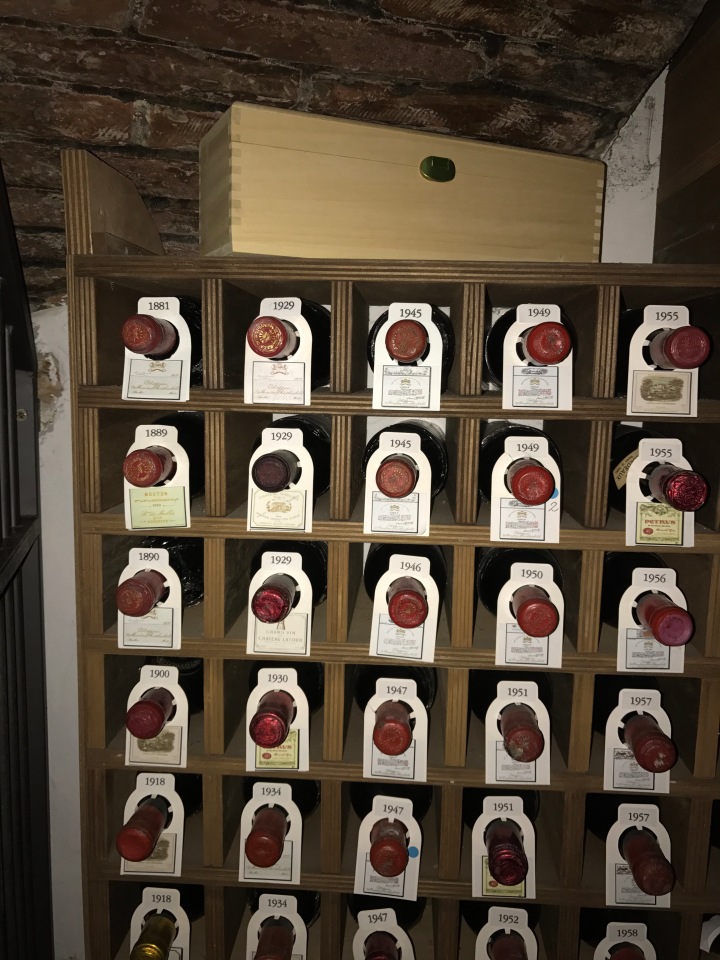 The wine cellar is amazing, with older vintages (some very old) of the best wines like Pétrus, Mouton-Rothschild, and Romanée-Conti. 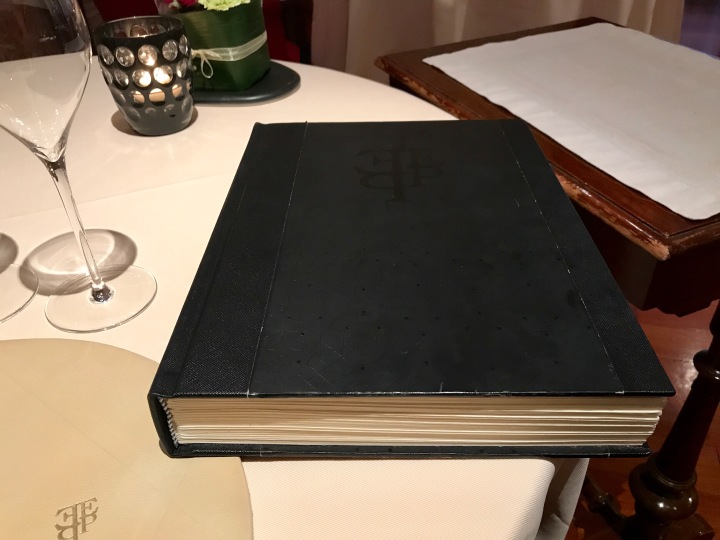 The wine list is huge and offers over 4,000 different wines to choose from. 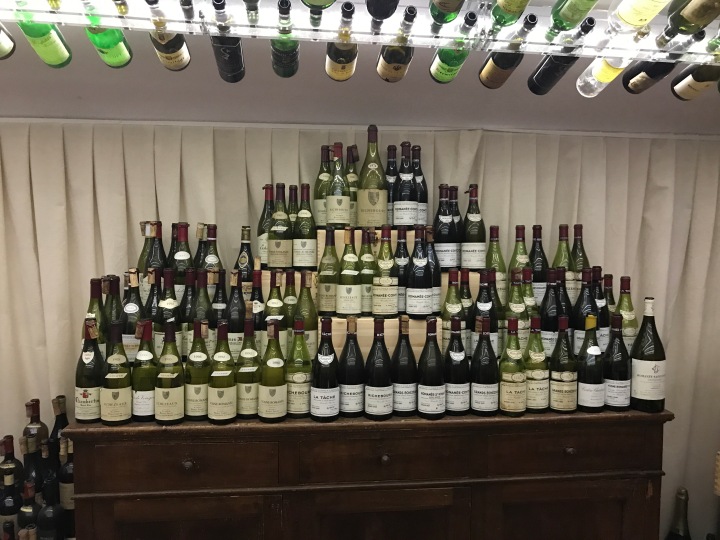 If a special bottle from the cellar has been opened, the empty bottle will be kept in the cellar as a memory. 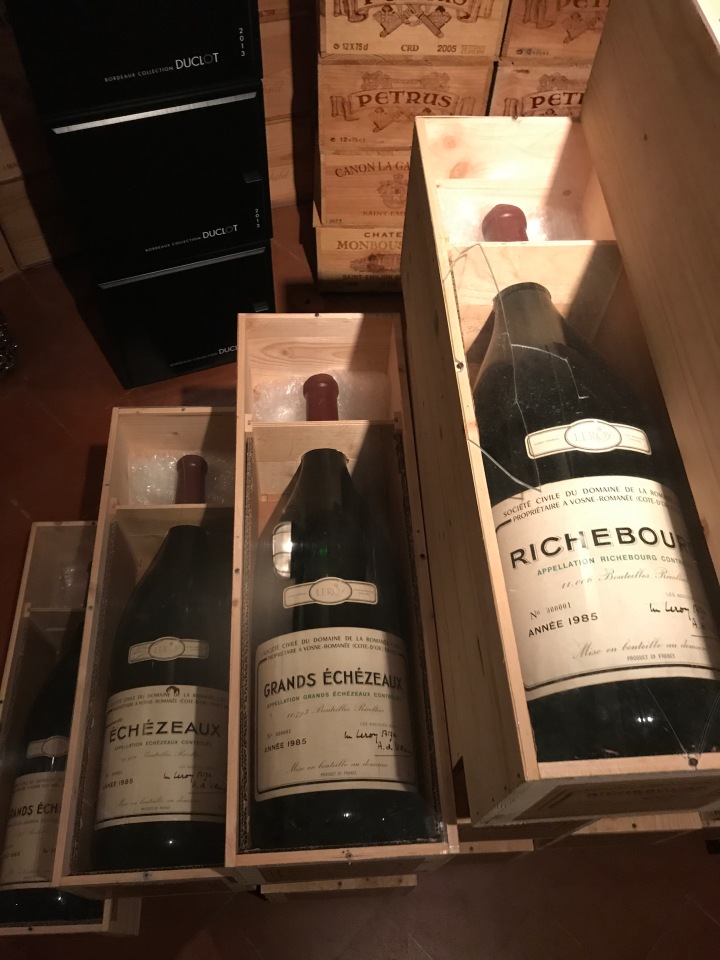 There are many collectors’ items, like these No. 00001 bottles of the famous 1985 vintage of several Burgundy Grand Cru in large format.

Enoteca Pinchiorri is owned by Giorgio Pinchiorri, wine director, and Annie Féolde, who is originally from France and who used to be the chef of the restaurant. Although they now employ two chefs and a sommelier, they are still very much involved with the restaurant and were there when we visited.

For most other restaurants, you go there for the food. Such restaurants have a famous chef and there are signature dishes you would like to try. And you will spend the largest part of the bill on food. No offense intended to Mrs Féolde, but if you spend the kind of money you spend at Enoteca Pinchiorri and food is your number one priority, then I’d advise you to go elsewhere. The food is very good, don’t get me wrong, and Mrs Féolde was the first female chef outside of France to be awarded three Michelin stars. But if you come to Enoteca Pinchiorri for a very expensive once-in-a-lifetime experience in terms of food, you will be disappointed. However, if you are looking for an expensive one-in-a-lifetime wine experience, then this is definitely the place to go! 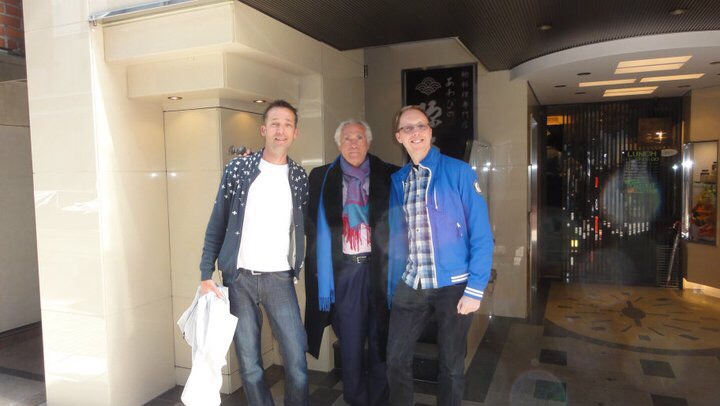 Before I continue with my review, I would like to tell you the story of how we ended up dining at Enoteca Pinchiorri. This is Kees and me with Giorgio Pinchiorri at the entrance of Sushi Mizutani (now closed), three Michelin starred sushi restaurant in Tokyo, in 2011. He had sushi there at the same time as we did with his family. As the restaurant only seated 8, we ended up chatting with him and found out he was Pinchiorri of Enoteca Pinchiorri. He said we should come eat at his restaurant. Back then we thought it was perhaps a bit above our price range. 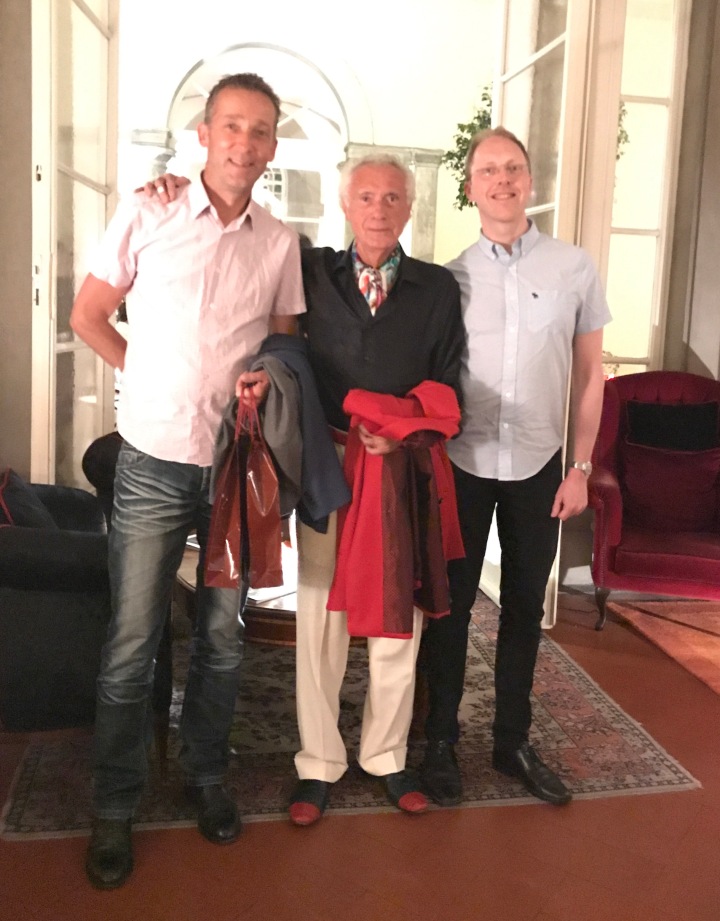 Fast forward to 2017: this is us after a great evening at Enoteca Pinchiorri. I had surprised Kees by flying us to Florence just to eat here for our 15th wedding anniversary. I thought that was good enough of an occasion to spend so much money. I am glad that I did, and now I can’t wait to go back and spend even more! 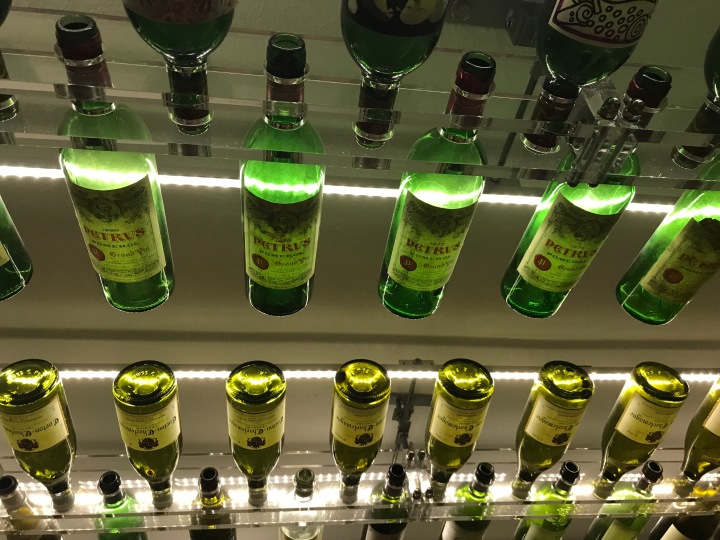 Enoteca Pinchiorri offers wine tastings at different levels. You do not pay for the number of glasses that you drink, but for the number of different wines that have to be opened for you. The wine will be refilled without additional charge a piacere. It starts at 3 wines for 200 euros per person (two person minimum). The next level is 300 euros for 3 wines, then 400 euros for 3 wines. That is the level that we picked, which is basically at the “premier cru” level at perfect ripeness (i.e. vintages of 5 to 12 years ago). It will be more expensive if you taste more wines at the same level (for instance 4 wines would be 525 euros instead of 400), or if you go to a higher level. The most expensive option is 3000 euros for Grand Cru wines of rare vintages.

Each tasting has several courses with several wines for each course, and with each dish the sommelier will choose the wine that will work the best with the food. In some cases, he will add another, cheaper, wine, free of charge to work with the dish. Because you will get matching wines with all dishes regardless of the number of wines you choose, it is better to choose for 3 or 4 wines of a higher level than 5 or 6 wines of a lower level (but for the same cost; for example 5 wines at level 2 are about the same price as 4 wines at level 3).

The food menu has à la carte options, or degustation menus: 4 courses for 150 euros, 7 courses for 225 euros, and 8 courses for 275 euros. We opted for 7 courses, mainly because we thought the main of lamb would pair more nicely with some of the reds than the main of suckling pig in the 8 course degustation. 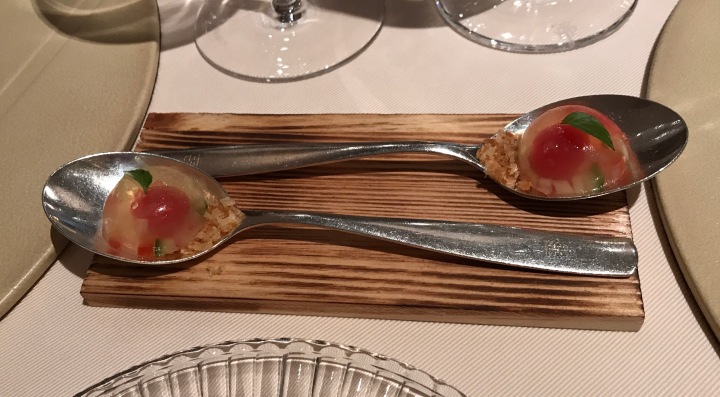 There were some nice amuse bouche like this modern take on panzanella. 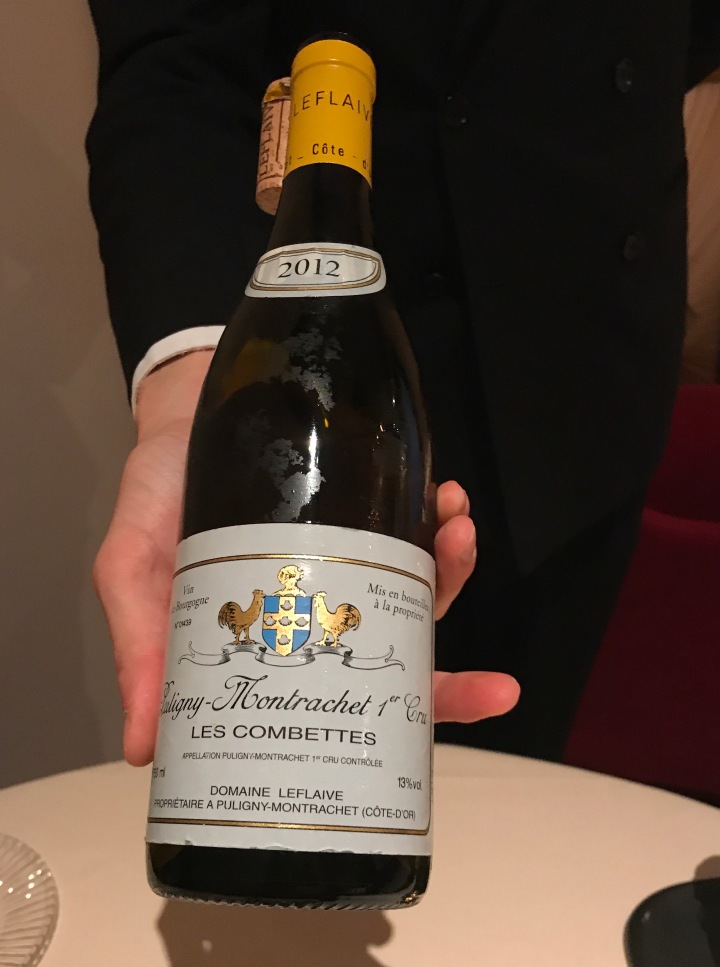 The first wine of our tasting was a 2012 Puligny-Montrachet 1er Cru “Les Combettes” of Domaine Leflaive. Amazingly elegant, balanced, complex, and with great minerality. This is not the kind of wine you will ever get in a wine pairing or by the glass anywhere. 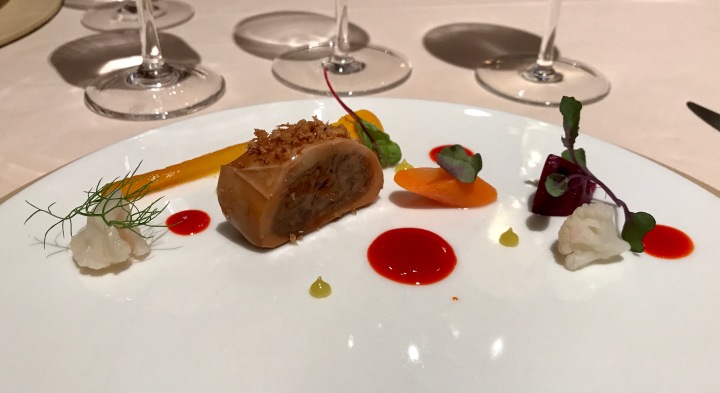 It worked very well with the first course: guinea fowl galantine with mushrooms; lukewarm pickles of beetroots, peppers and cauliflower with cream of carrots and rosemary. A very elegant and delicious take on a terrine with pickles. 9/10 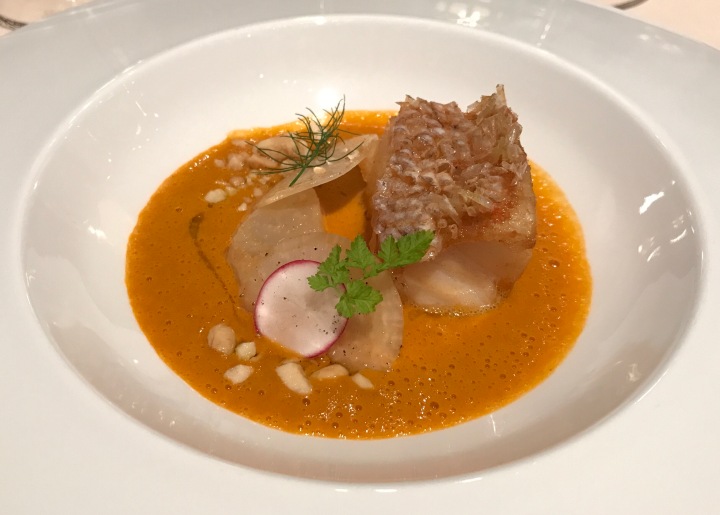 Although the Puligny could handle this very well, the sommelier poured a blend of chardonnay and traminer (not gewurztraminer) from Tuscany as an alternative pairing that worked very nicely, too. 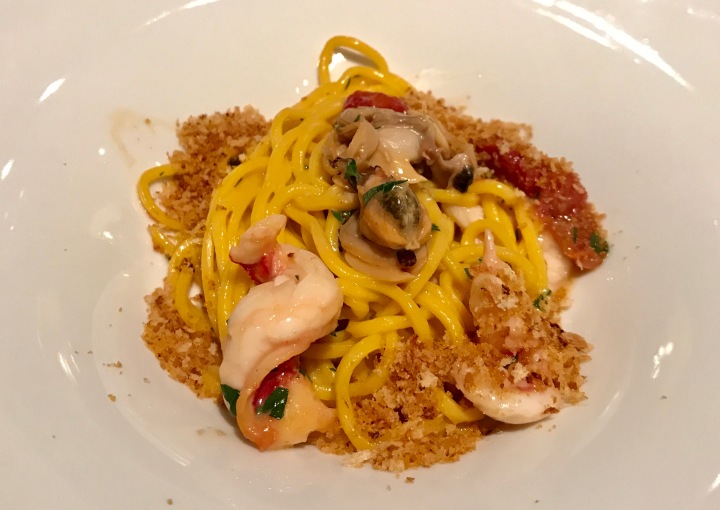 This worked with both the Puligny and the chardonnay/traminer, but our glasses were running dry so we asked the sommelier for a refill. Instead of a refill of the Puligny… 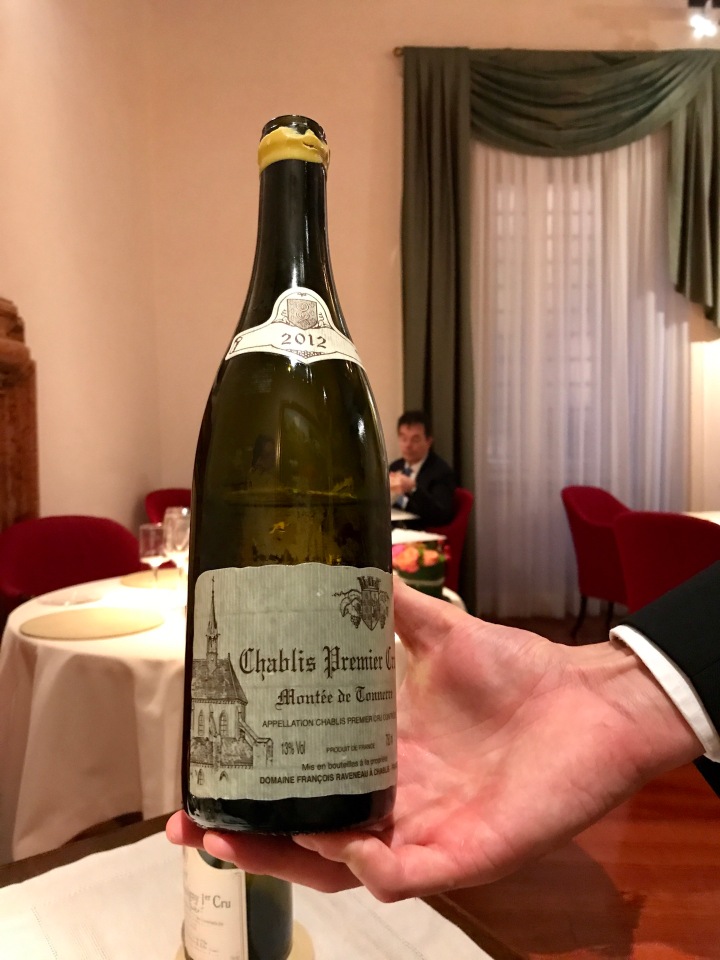 …the sommelier came up with this 2012 Chablis Premier Cru Montée de Tonnere from Domaine Raveneau. We were lucky as this had been opened up for another table. This was easily the best Chablis I’ve ever tasted (also the most expensive), very elegant, complex, and balanced. It worked very well with the seafood. 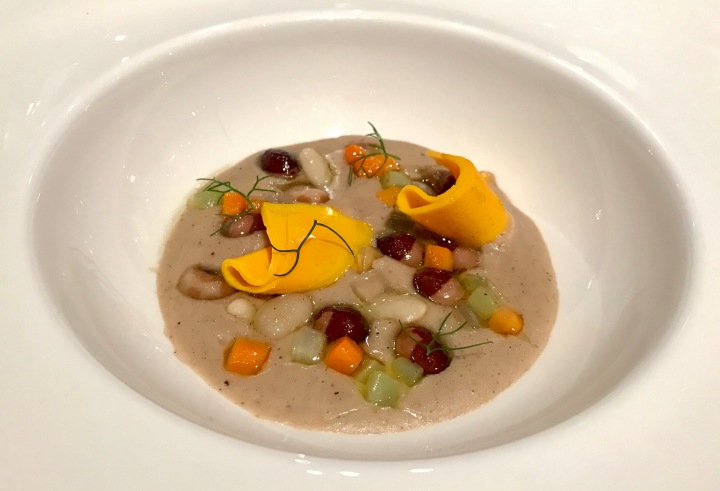 Then came the restaurant’s version of a very humble Italian dish: bean soup. It was a delicious rendition, 9/10, that worked very well with… 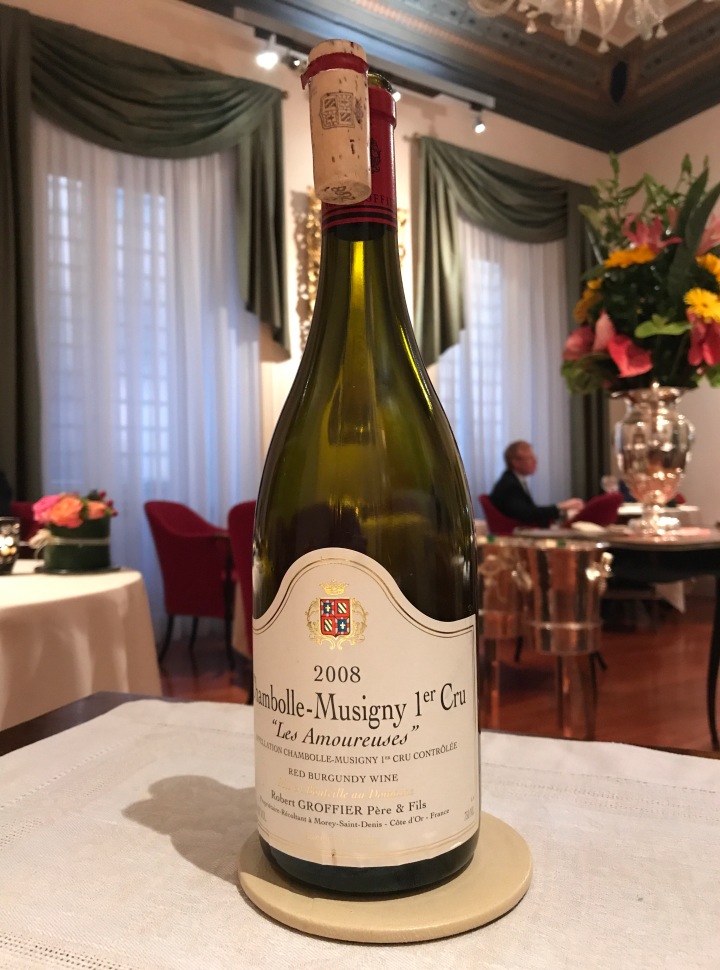 2008 Chambolle-Musigny 1er Cru Les Amoureuses of Domaine Groffier (retails for almost 300 euros). The nose of this Pinot Noir was amazing, like the best parts of the best Pinots you have ever smelled combined into one complex smell. But also on the palate this was awesome with great balance and elegance. 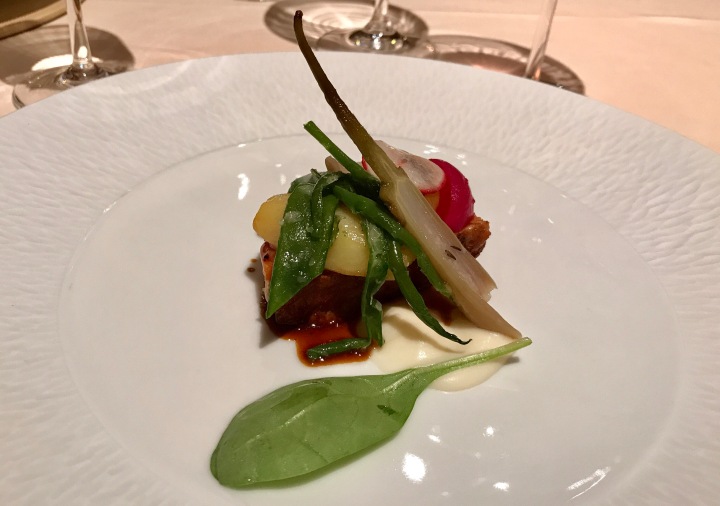 It worked pretty well with the next dish, too: veal loin cooked in the pan with pepper, snow peas, silver skin onions and mountain white potatoes with tarragon. The veal was very tender and flavorful, 9/10. 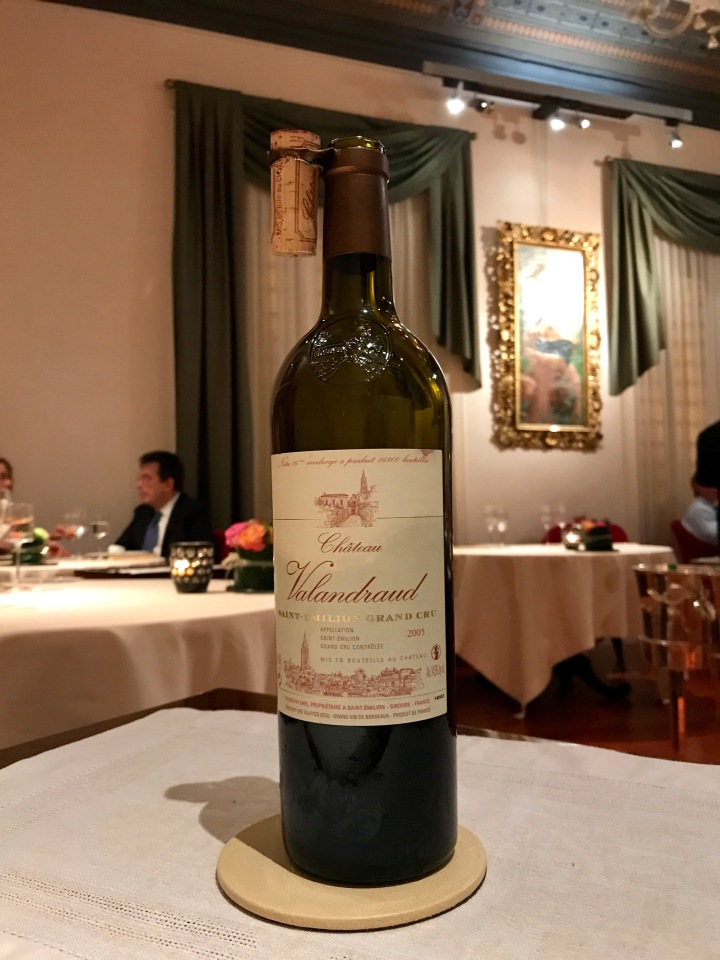 The sommelier presented the final wine of the tasting: 2005 Château Valandraud St Emilion Grand Cru. Although the tannins had definitely softened this was amazingly youthful with lots of fruit and character. 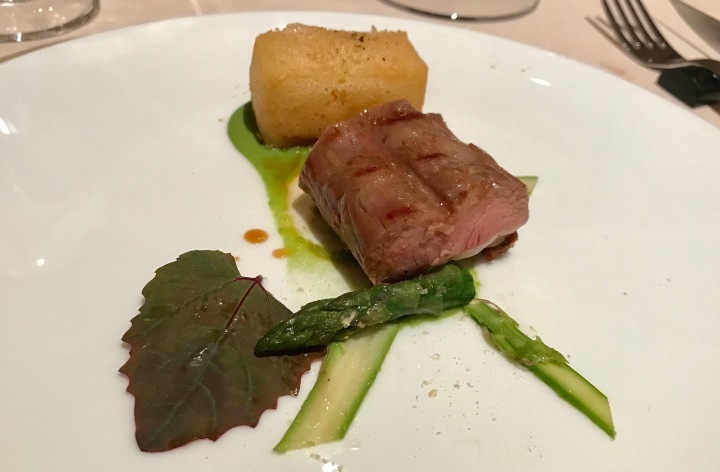 It worked well with the roasted loin lamb with aspargus tops and lard and chickpeas pudding. The lamb was perfectly cooked, tender, and flavorful. 9/10

There was another bonus wine from the sommelier with this dish: a merlot from the Chianti region that had a wonderful earthy nose (some would say barnyard). 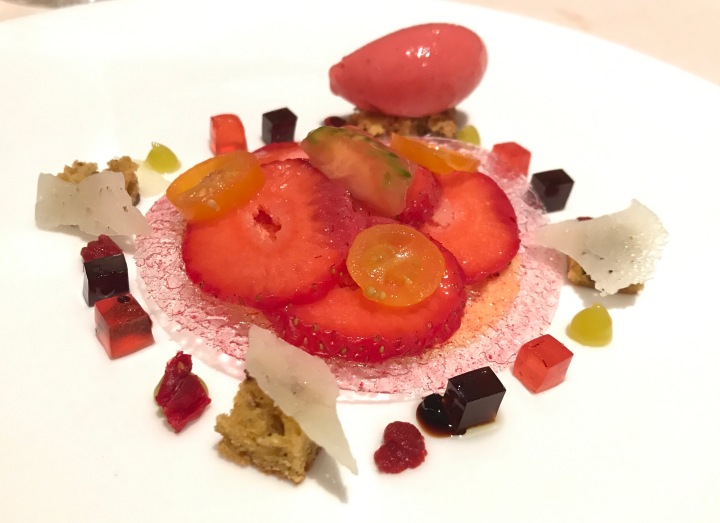 Wow. What an evening. Yes it was expensive, but the only regret I have is not selecting an even more expensive level of wines. Please note that all of the wines of the tasting retail between 200 and 300 euros, so if you wanted to taste the same wines by yourself you’d have to spend more than the 800 euros (400 per person) we did. I would even go so far as to say that it is good value, because if you spend 100 euros for a wine pairing at another restaurant you often get wines that retail at 15 to 30 euros. (So there the markup is considerably higher.)

The food is very good. Perhaps not as good as some of the best three Michelin star restaurants, but it is at a very high constant level and a great accompaniment to the wines. The wines are selected such that the food supports the wine; the wines are mostly slightly more flavorful than the dish. Usually I would comment on that, but for these wines that is exactly what you want in order to taste all the nuances. 9/10 for the food.

The service is very good, too. For a restaurant that requests the gentlemen to wear a jacket, the service was remarkably friendly rather than uptight. It was also a great touch to be greeted by both the owners. There are two things that could be improved. The first is the explanation of the wines; it was not clear to me until after we had ordered that there would be additional wines (like the Moscato d’Asti for dessert) free of charge. The second is that the sommelier, as you can imagine, was very busy and we therefore had to remind him (but just once!) that we could do with some more white wine. 9/10 for the service.

It would not be fair to rate the wine in comparison with other restaurants I have rated, because if I gave this 10/10 then from now on no other restaurant would be able to score even 6/10 in comparison. But of course wine tastings at other restaurants come at a very different price tag. Only Ryu Gin (in Tokyo) and Aqua (in Wolfsburg, Germany) came somewhat close at about 200 euros per person and some premier cru wines.

I can’t wait for the next very special occasion to go back! 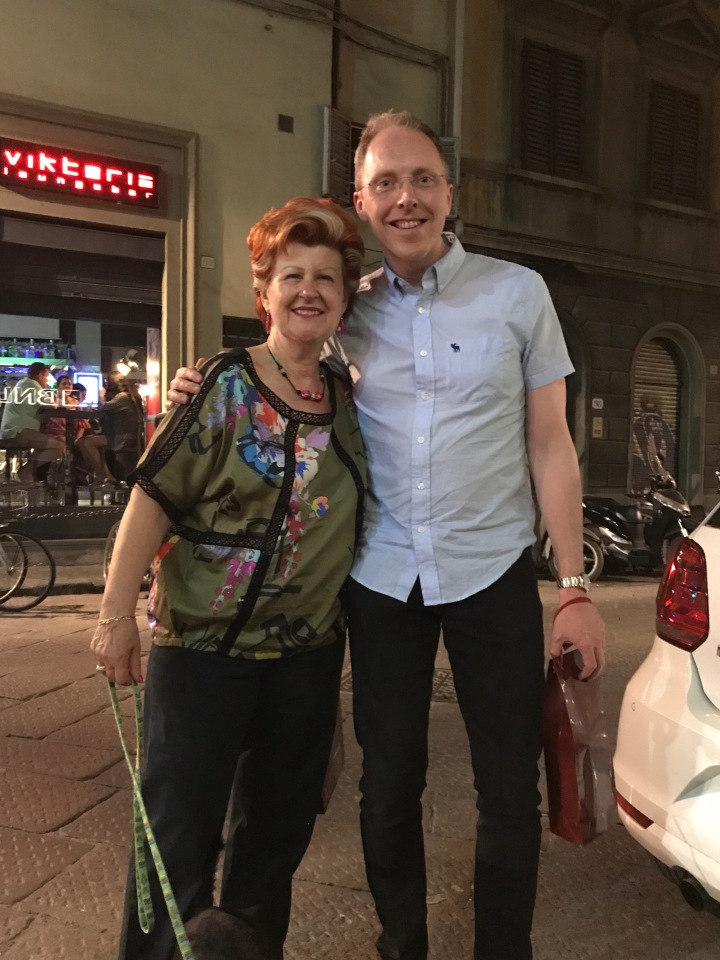 After dinner we ran into Mrs Féolde walking her dog.