S’Apposentu di Casa Pudu is the restaurant of chef Roberto Petza in the hinterland of Cagliari in Sardinia, near the famous nuraghe in Barumini. What drew us here is not the one Michelin star, but the three ‘forks’ (the highest score) of Gambero Rosso.

Besides a la carte there are two six-course degustation menus, one meat and one seafood, for 65 euros or 115 euros with matching wines. The listed menus include cheese, and dessert is added for free as a seventh course. We were seated outside, overlooking the garden.

The greetings from the kitchen were paired with a cannonau from Gallura in Sardinia, which went well with the tartare with mustard of licorice. The clam chip was also very nice. 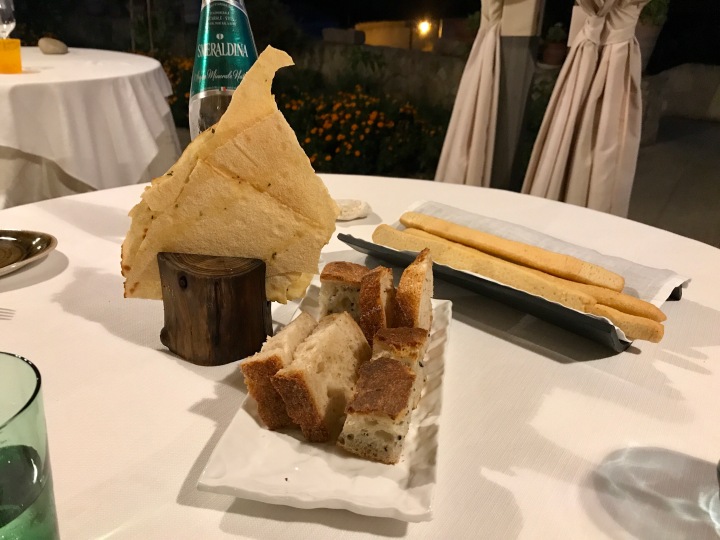 The bread, made at the restaurant, was fantastic. Sardinian pane carasau (the very thin crispy bread), grissini and sourdough bread.

The menu started with veal tongue, parsley, fresh almonds and fruit. The tongue was very tender and had an elegant flavor. The pairing with a perfumed bovale sardo (known as graciano in Spain) was ok, although the wine had a bit too much body for the dish. 8/10

Crispy onions and pancetta in a cream of truffled potatoes and (hardly cooked) egg. Paired with the same wine, which could handle the creaminess of the dish. Very nice dish, although I would not have minded a bit more pancetta. 8/10

Another greeting from the kitchen: ox heart with fig. Very nice and again nice to see offal served in such an elegant and delicious way.

Onion broth with pecorino cheese ravioli and herbs. Paired with a Bordeaux blend from Sicily from 2000. The onion broth had a deep sweet flavor that was a nice contrast with the cheese. 8/10

Lasagna with mutton ragù and green beans, paired with another Bordeaux blend from 2000 but this time from Umbria. The ragù had great depth of flavor. The green beans could have played a slightly bigger role. The wine worked well with the ragù. 8/10

Quail with mushrooms, paired with the same wine as the previous dish and perhaps a bit too much body compaired to the quail. The quail was cooked perfectly; very tender and juicy and full of flavor. 9/10

A selection of cheeses with different condiments. My favorite one was orange marmelade with fennel, which worked well with the Moscato passito from Sardinia.

This was a really nice dinner. The food is simple yet elegant, 8/10 for the food, which is appropriate for a one Michelin star.

I have mixed feelings on the wines. On the one hand those aged Bordeaux blends were very good and they were ok with the food. You don’t get 17-year old wines often in a wine pairing. On the other hand for a restaurant that showcases local produce it would have been nice to have only Sardinian wines and wines that worked even better with the dishes (including white wines, because all was red). 8/10 for the wine.

The service wasn’t bad, but not at the level of the food and wine. Sometimes they were too much in a hurry to explain the dishes properly. And the wine wasn’t topped up without asking. 7/10 for the service.

Altogether we had a very nice evening and look forward to the next time.

14 thoughts on “Dining in Italy: S’Apposentu*”