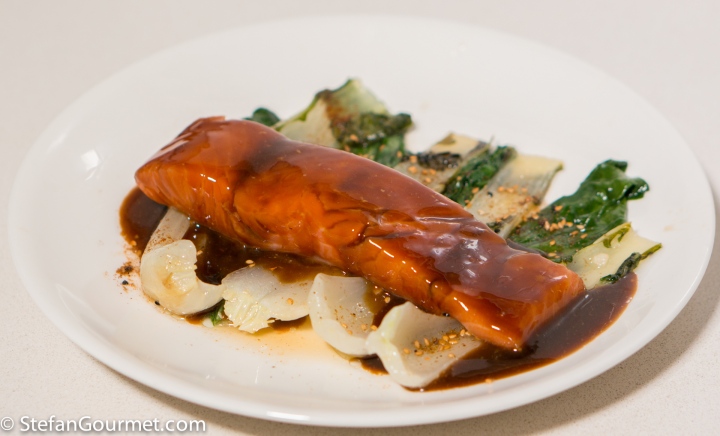 Teriyaki is a Japanese cooking technique in which fish or meat is broiled or grilled with a glaze of soy sauce, sake, and mirin (sweet sake). (Making your own teriyaki marinade is better than store-bought versions that include too many ingredients like ginger and garlic.) In this version salmon is cooked sous-vide and the glaze is created by binding the marinade with arrowroot and pouring it over the salmon. 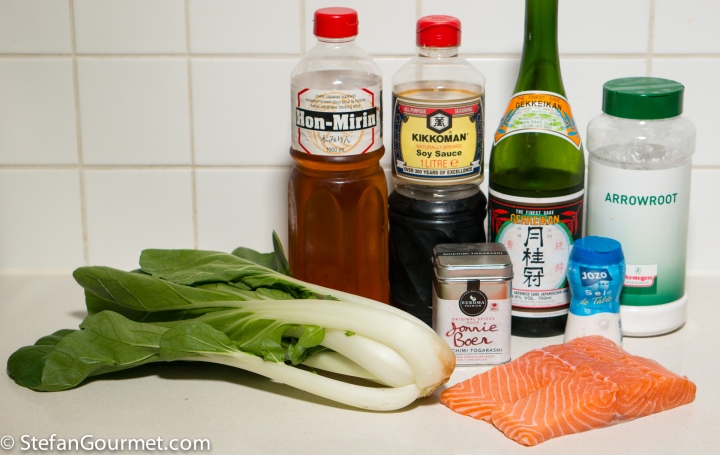 2 pieces of salmon fillet without skin, 175 grams (6 oz) each (the salmon should be sashimi grade as we will be cooking it to a low temperature)

Season the salmon with salt on all sides. 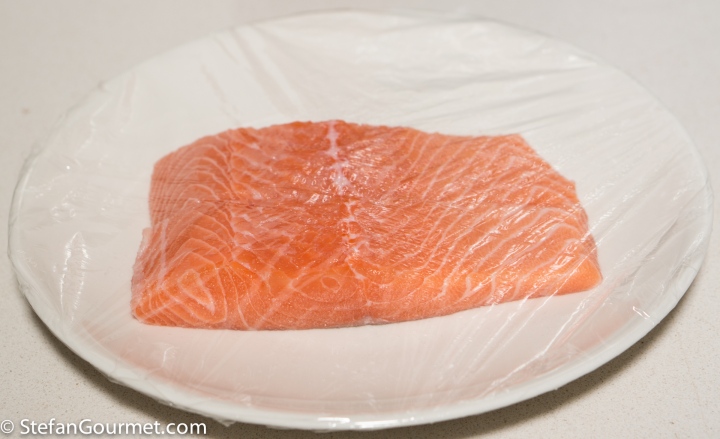 Refrigerate the salted salmon, covered, for an hour to allow the salt to penetrate. 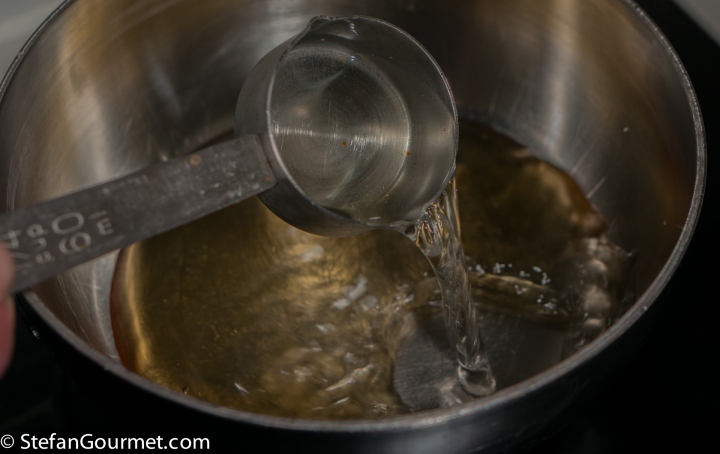 Bring to a boil, stirring. 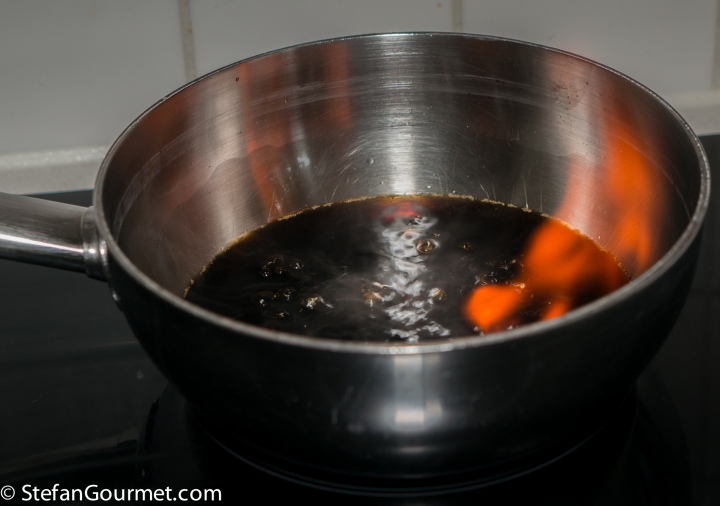 Once it boils, lower the heat and ignite the fumes to burn off the alcohol.

Allow the teriyaki marinade to cool by submerging the sauce pan in cold water and stirring, and then to cool further in the refrigerator. 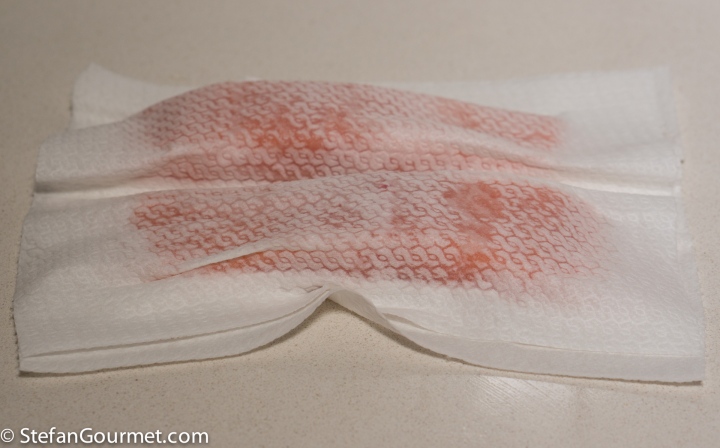 After an hour, take the salmon out of the refrigerator. Rinse with running water to remove any excess salt, and pat dry with paper towels. 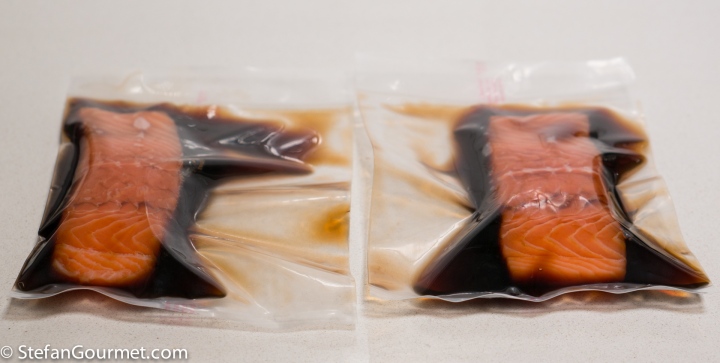 Vacuum seal the salmon in individual bags with the teriyaki marinade. You can do this either with a chamber vacuum sealer or by using ziplock bags and the water displacement method. 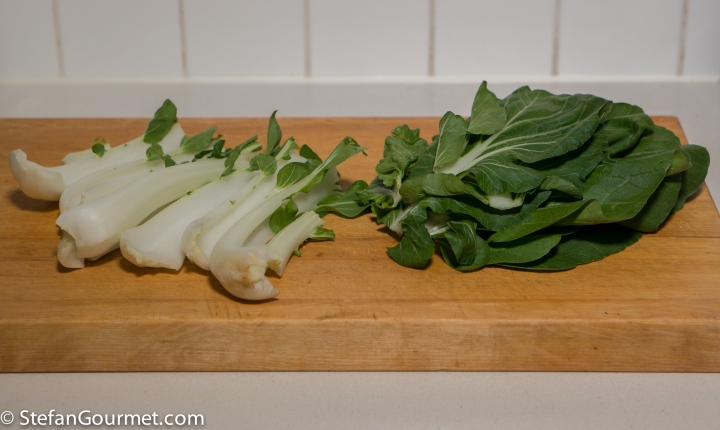 In the meantime, prepare the bok choy. Separate the white stalks from the green leaves, as the stalks need to cook longer than the leaves.

Heat 2 tablespoons of vegetable oil in a frying pan or wok and add a minced clove of garlic. Stir briefly, but make sure the garlic doesn’t turn brown. 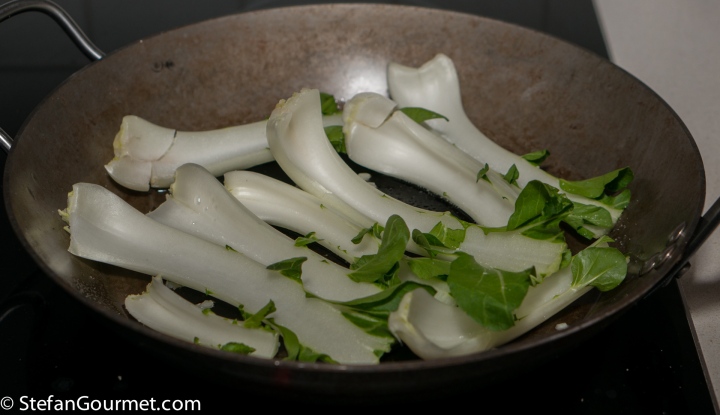 Add the boy choy stalks, season with salt, and stir for a minute. 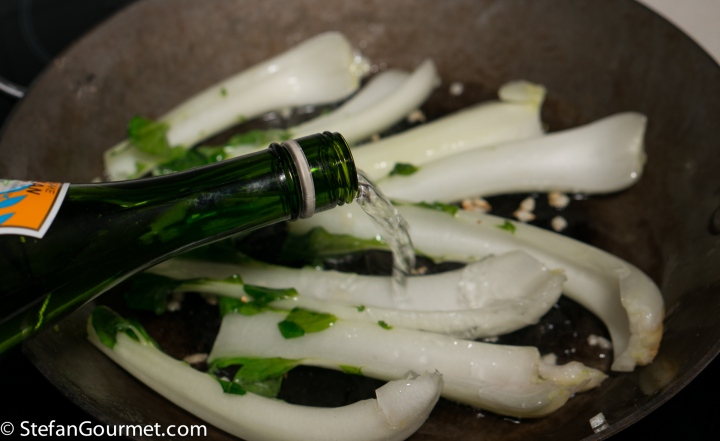 Add the remaining 60 ml of sake.

Cover and cook over medium heat for about 5 minutes.

After those five minutes, add the leaves, season with salt, and cover again.

Cook until the greens have wilted and the the stalks are tender but still firm to the bite, about 4 minutes.

Arrange the bok choy on preheated plates and sprinkle with 1/4 teaspoon of shichimi togarashi per portion.

Wipe the frying pan clean with paper towels. Take the salmon out of the sous-vide after 30 minutes.

Cut open the bags, and pour the marinade into the frying pan. Set the salmon aside (still inside the bags).

Stir well, then bring to a boil and cook until the sauce thickens.

Carefully take the salmon out of the bags and place it on top of the bok choy. (The salmon will fall apart easily if you are not careful.) Spoon the glaze over the salmon and serve.

This is great with gewurztraminer, either from Alsace or Alto Adige/Südtirol.

Swordish alla Palermitana is a great way to prepare swordfish. To make a lighter crust, extra virgin olive oil is used to make the breadcrumbs stick to the fish. The breadcrumbs are flavored with umami bombs such as anchovies, olives, capers, and sundried tomaties, and brightened up with parsley. The breaded fish is then cooked in the oven without any additional oil to keep things light.