We had 6 restaurants with a combined total of 15 Michelin stars lined up in Tokyo and Taipei, but due to the corona virus never made it to Taipei and had to leave Japan early. When the Dutch government strongly advised to come home as soon as possible, we rebooked to the next available flight from the closest airport, which was Osaka. And so we spent our last day in Japan in Kyoto and asked the concierge of our hotel to book a table at the best possible restaurant. Although Kyoto has 8 restaurants with 3 Michelin stars, all of them were either closed because of reduced opening days due to corona, or fully booked. And so we ended up at this restaurant.

The restaurant is located in an alley and the taxi dropped us off at the beginning of the alley. The restaurant is only marked with its name in an archaic rendition of the Japanese characters, but we managed to find it quite easily and we were seated in a private booth.

The booth had a seasonal decoration of cherry blossoms. This is a kaiseiki restaurant, classic Japanese cuisine. There are only chef’s menus, which is called omakase in Japan, of 11,000 or 16,500 yen. We opted for the latter, which is still cheap compared to the 40,000 yen or so we would have had to pay for kaiseiki omakase at a 3 star restaurant.

The first thing that was served was hot water with puffed rice. 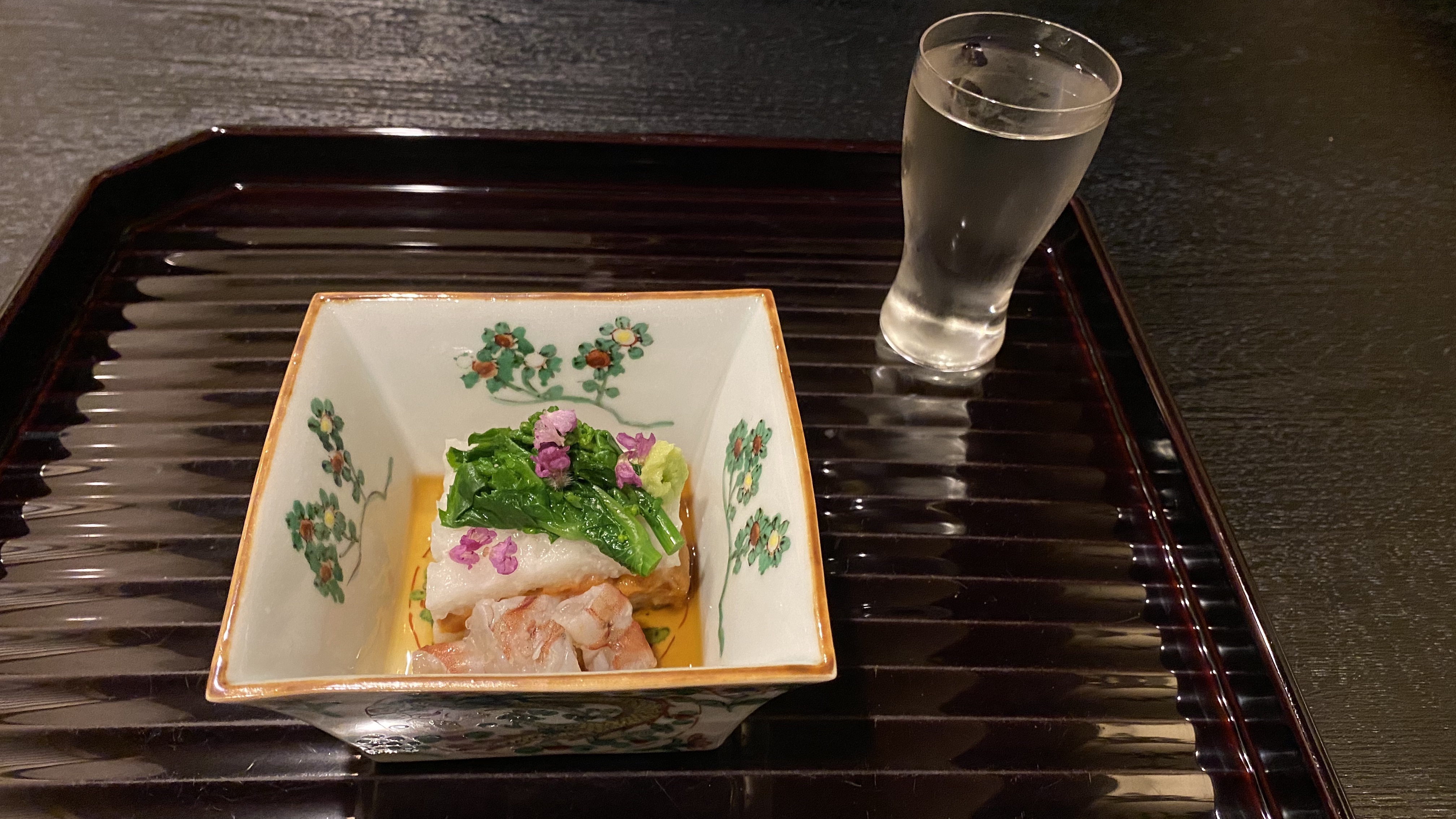 The first dish was one of my favorites: raw shrimp, uni, turnip greens, wasabi, and yam. Very detailed flavors and very elegant. Presented beautifully in a dish with a decoration similar to the dish. 9/10

Hard clam, tofu, dashi, and carrot with ginger-infused greens. The clam was very flavorful and tender (for a clam) because the chef makes cuts in the clam meat to make it more tender. The dashi was very good — the quality of the dashi is the basis of kaiseiki cuisine. A nice contrast between the textures of the clam, tofu and carrot. 9/10

The sashimi consisted of tuna, sea bream, squid, and some type of Japanese snapper. It was served with wasabi, seaweed jelly, salt, and soy sauce.

Part of the skin of the snapper was left on and lightly charred with a torch, which added a nice flavor and texture. The fish was of course impeccably fresh and the squid was almost as tender as raw scallops. 9/10

Grilled tofu with two toppings, one with coldsfoot bud and one with sansho pepper. The latter tastes remarkably like lime zest. I never knew tofu could be so tasty. 8/10

The most impressive dish was this arrangement of different bites (on the photo you see two portions). ‘Sushi in a cup’ with salmon roe, baby squid, baby octopus, more coltsfoot bud, tiny fishes cooked in soy sauce and sugar, a caramel ‘flan’ made using fish eggs, a slice of duck breast and a roll of egg with eel. Everything was very tasty and beautifully presented. The duck was just duck without anything but it was very flavorful and very tender because of cuts made in the meat. 9/10

Crunchy freshwater fish to be eaten whole with a vinegar dip. Quite nice but I thought the fish was a tad dry. 7/10

Smoked scallop, served cold, with white and green asparagus, served almost raw, and a vinegar jelly. Nice contrast between the textures and flavors. 8/10

Fried tofu with more jelly, ginger, and yam. Nice but I didn’t get the point of this dish. 7/10

A Japanese meal is not complete without rice, pickles and miso soup. In kaiseiki this is always served as the last savory course. The rice was served with peas. 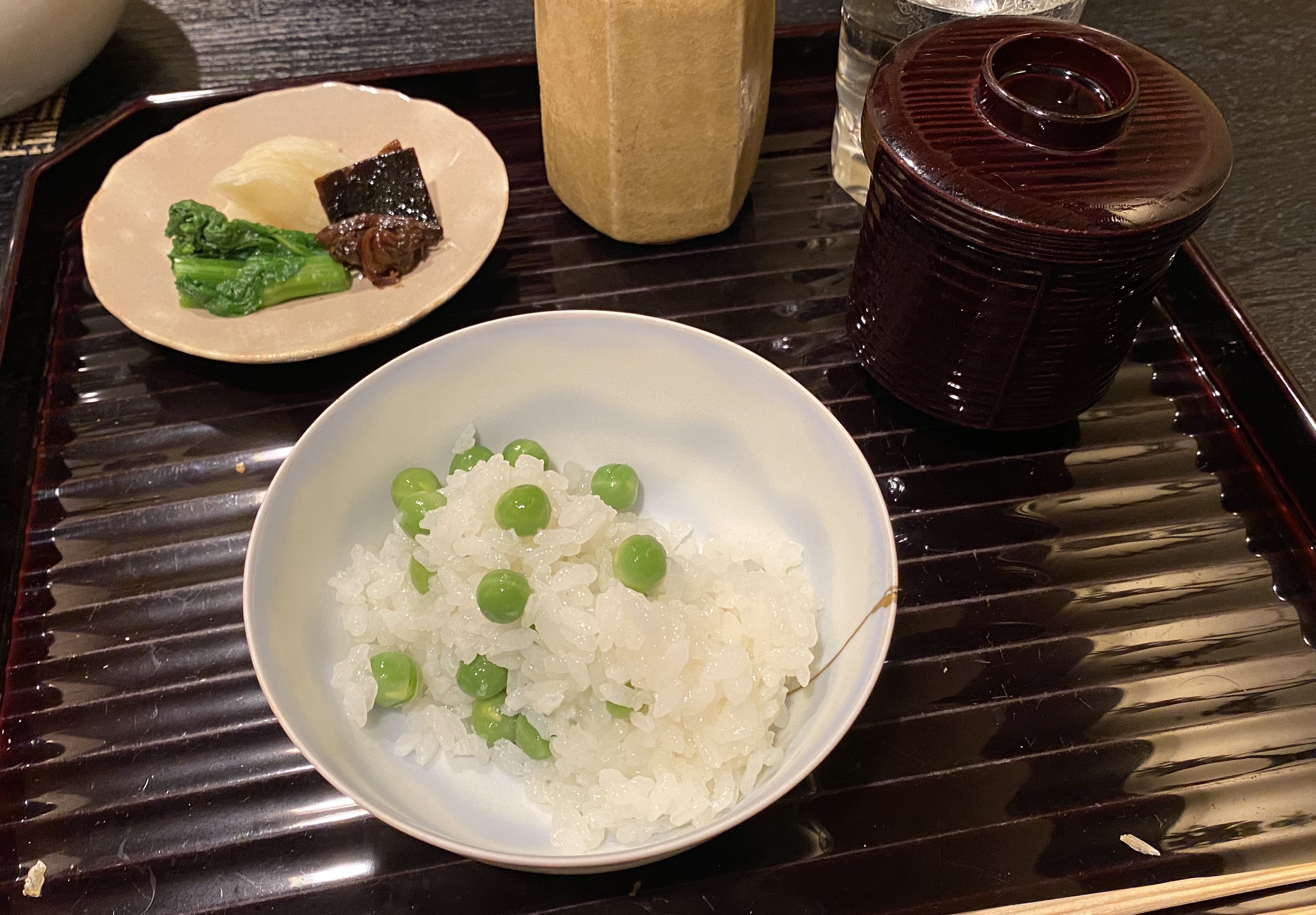 The rice was very creamy and the peas very fresh (and thus sweet, as peas lose their sweetness quickly after harvesting them). There was a nice variety of pickles. The miso soup had remarkably little miso in it (hardly any) and of course made with the same good dashi. 8/10 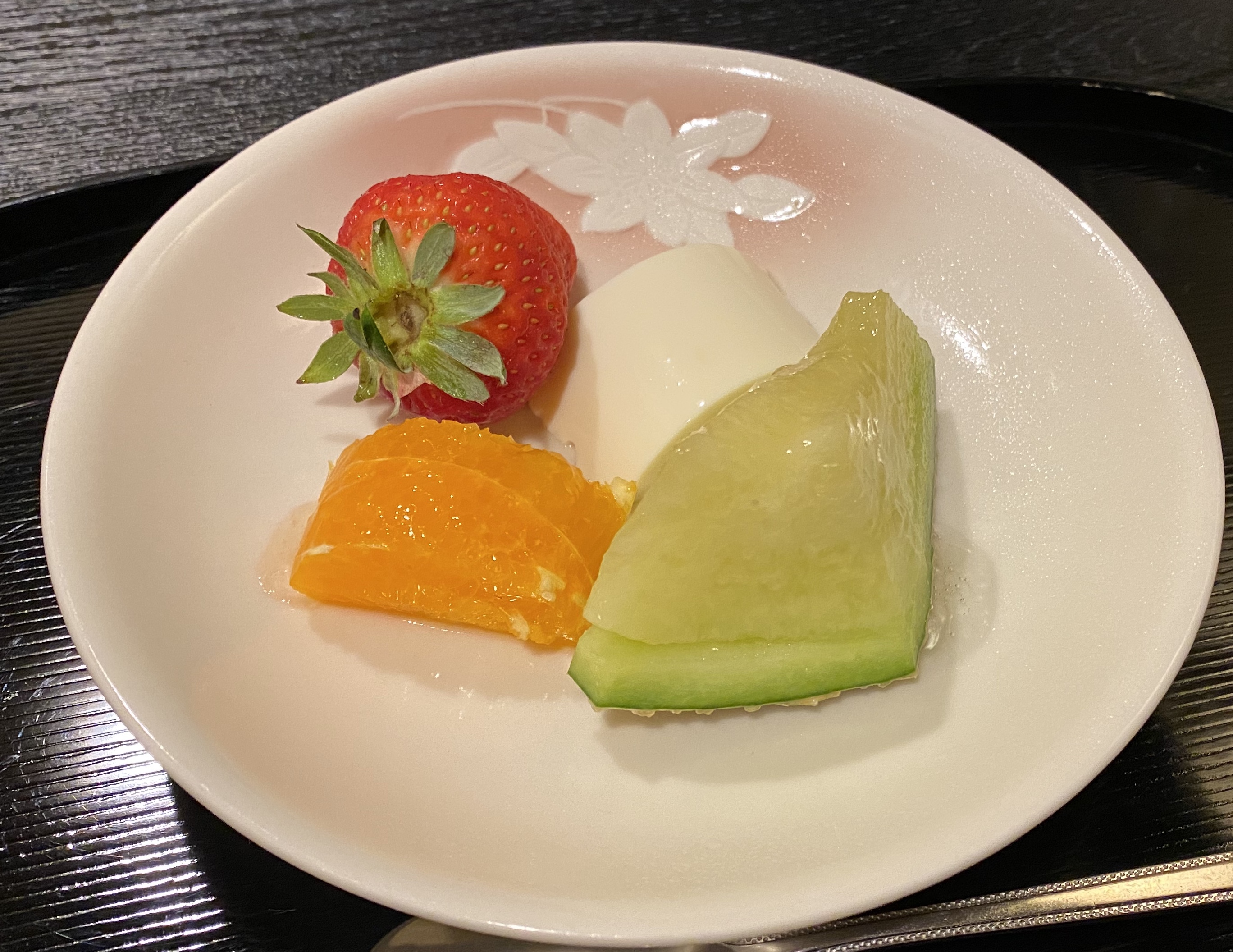 Some fruit and tofu panna cotta.

Mugworteaf rice cake with adzuki bean filling. A very traditional Japanese sweet (although the pink-colored adzuki decoration is an addition of the chef) that is only mildly sweet. 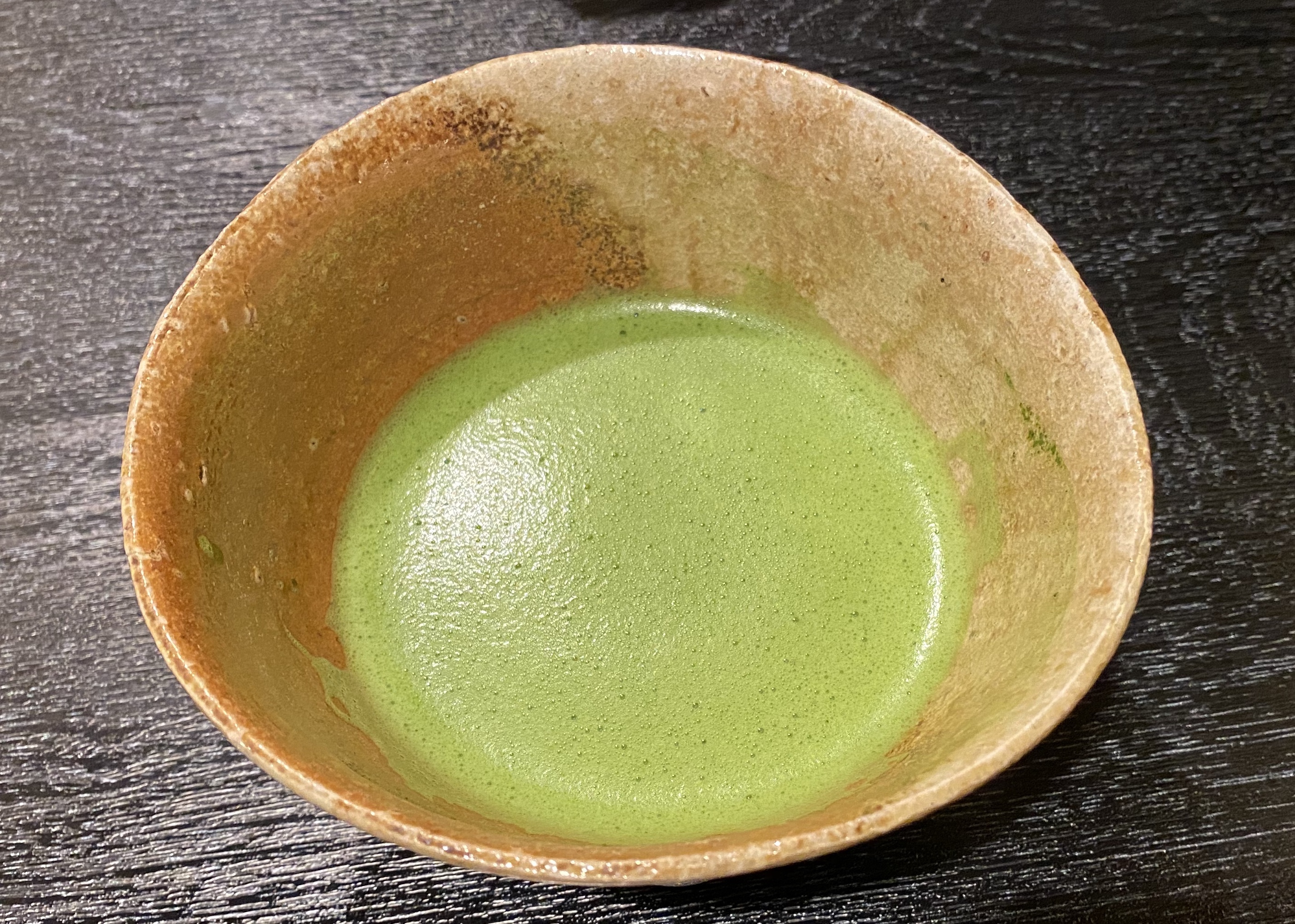 This was the first time I’ve had matcha, Japanese green tea made using fresh tea leaves. Unlike regular tea, it has as much caffeine as coffee. I found this out the hard way (by staring at the ceiling of my hotel room wondering why I couldn’t sleep, until I googled matcha).

This was not as spectacular as the 3-star kaiseiki dinners we had planned, but it was very good for a third of the price. Kaiseiki is very elegant as a cooking style, both in the mostly subtle flavors and the beautiful presentations. I have not had the pleasure to dine at enough kaiseiki restaurants to make a good comparison with others, but I’d say two Michelin stars is correct given the high quality of the food. 9/10 for the food.

There is no wine here, only sake. We had some nice sake with the meal but I’m not rating it.

The service was very good. The staff speaks some English and went out of their way to explain the ingredients to us, using a book with pictures and English translations as needed. They were constantly watching our table (peeking through the curtains) and promptly cleared away and brought new dishes, or asked if we wanted to order another glass of sake. The only glitch was clearing away a glass that still had some sake in it. When we left the chef came outside on the street to greet us. 9/10 for the service.

I hope this corona crisis is resolved soon, so we can go back to Japan and have many more dining experiences like this one. The only advantage of this trip was that Kyoto was much less crowded than it normally is (or so we’ve been told, because this was our first time there).